As part of "Celebrate the Boy" last month I saw a cute tutorial I wanted to try out.  It was the messenger bag from Amborsia Girl.  She purchased an ammo bag from an army surplus store and then put a cute freezer-stenciled patch on it.  It's a simple, quick project and a lot of fun.
Well, turns out I don't have an army surplus store super close by and turns out I'm cheap, so here's what I did instead. 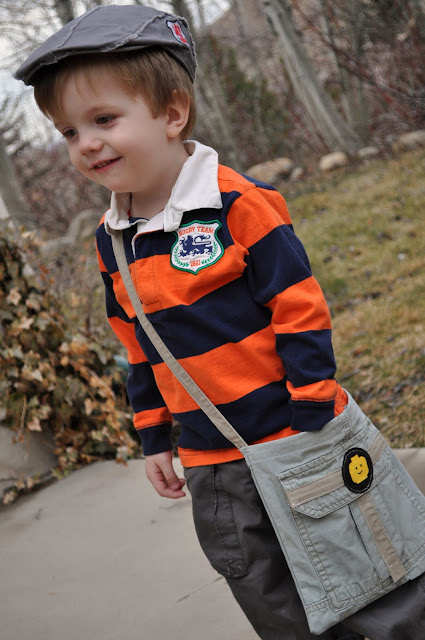 I pulled out an old pair of capris that I was no longer using.  You can see I've already used them a bit for scrap fabric. 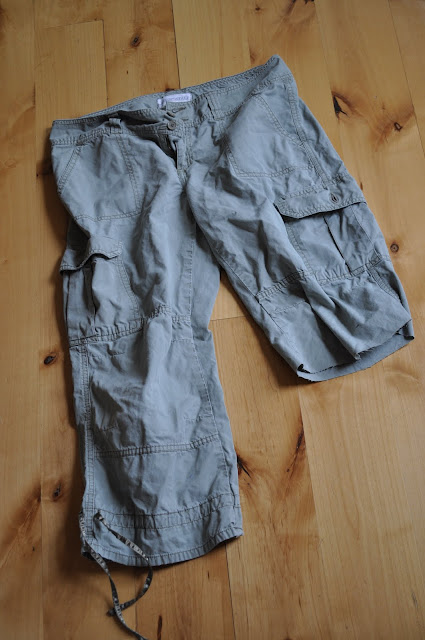 I just cut out a large square around the pocket to make my own bag. 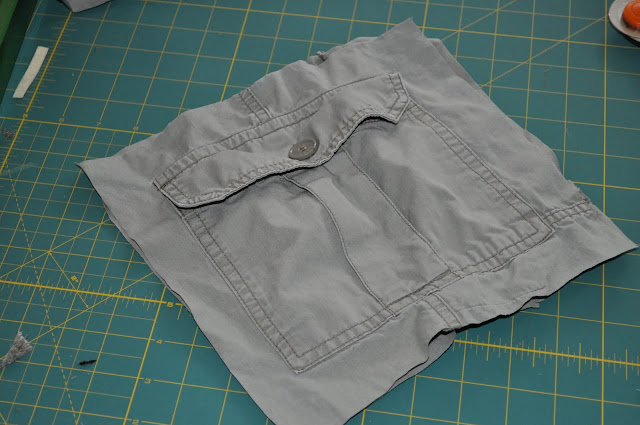 I hemmed the top edge and then sewed it together.  For a strap I used these straps that came laced around the knee of my husband's shorts.  He didn't like them dangling, so he pulled them out.  It was the perfect size for a strap.  I had two of the strands, so I used one to add as a stripe to the pocket. 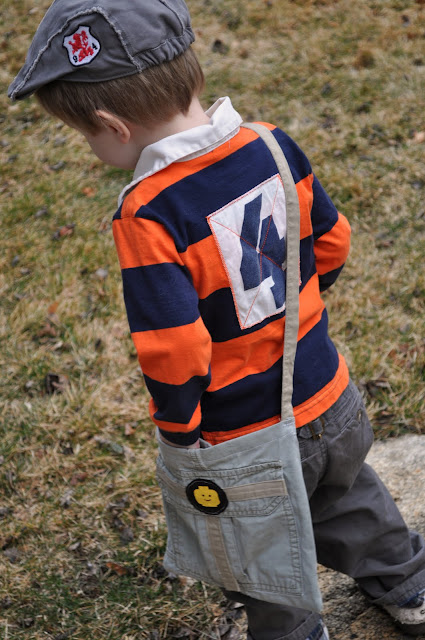 Next, I had to decide what the patch would look like.  I picked another one of my son's obsessions - Legos.  He's not really big enough to put complex lego stuff together, but he loves the lego men.  He's always decapitating them and changing up their outfits. 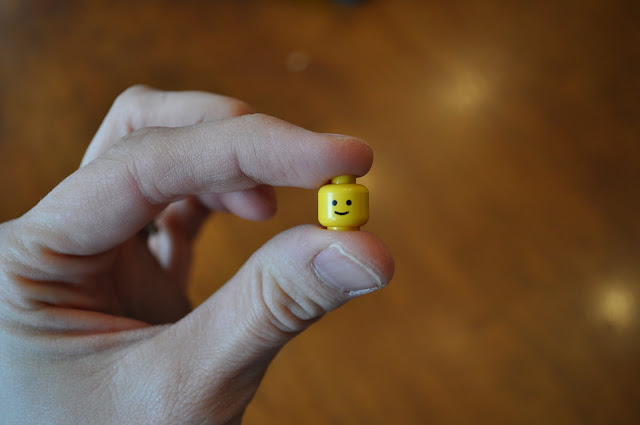 I drew a lego head for my stencil and stitched it onto the bag.  He's happy to have a way to carry them all around and I'm happy I don't have to lug them around everywhere.  It's win-win baby! 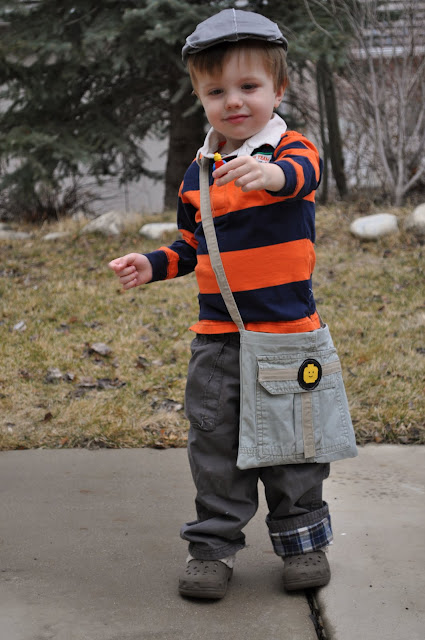 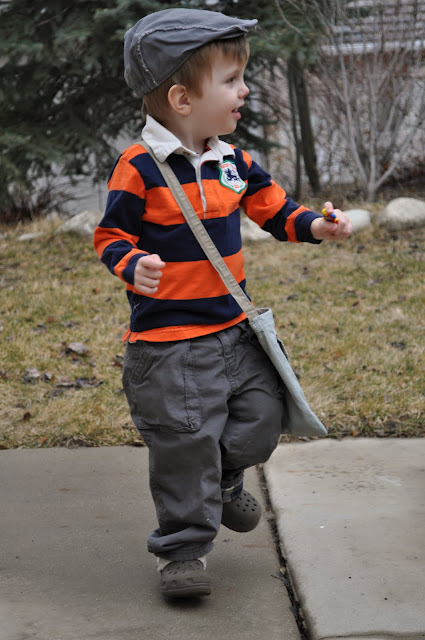 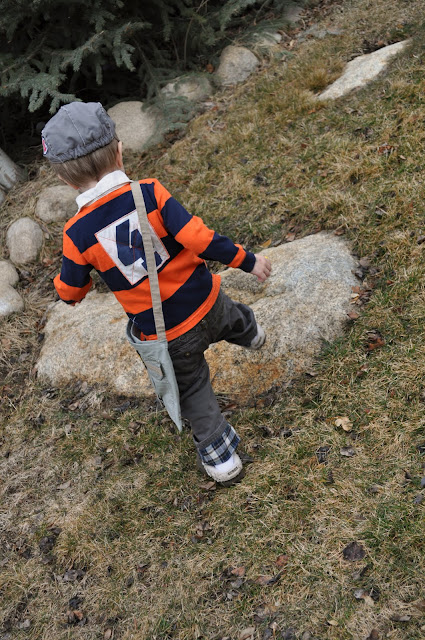 The cost of crafting was a bit high this week....and I'm not talking about dollars.  Tuesday my son was playing with the neighbor boy.  The neighbor boy did a little too much spinning in our swings and threw up into my ottoman.  It's one thing to clean up your own child's puke, but someone else's kid?  NASTY!!!
Then Wednesday Rex and his cousin played outside while my sister and I crafted.  When they came in they were covered in dirt, but we didn't think much of it.  We just cleaned them up a bit.  Then Rex started talking about going ouside and playing with the "beans" again.  Guess what "beans" are.  Deer poop!  They were scooping it up and playing with it all over the yard.  NASTY!!!  No more beans for him.
What's happened while you were crafting?
Pin It
Email ThisBlogThis!Share to TwitterShare to FacebookShare to Pinterest
by iammommahearmeroar at 7:30 AM

I love all the boy stuff! I have 3 little busy boys and love making fun things with and for them. please come visit 3sillymonkees.blogspot.com

Hilarious! I'm glad I took the time to read your text. :)

I love that bag. So cute! You are inspiring me to do SOMETHING cute for my little guy. Maybe one of these days I'll get around to it. :)

What a great bag. Very cute. However I love that hat. Did you make it yourself or buy it? If made, how did you do it? I have 2 little boys and they would look so cute in that hat.

I'm loving his hat as well! (The bag is great too, by the way). Did you make the hat?

Projects like this make me realise i really need to learn to sew! It's so dang cute! I love the hat too! Did you make it?

The bag is fantastic and the lego head is great. But the sick and the beans, totally nasty! The things we mothers do! :)

Love it!! The Lego man head is such a cute idea!

That is one funny price to pay while you guys craft. I sure remember letting you guys make a million bean bags and pillows while I sewed. Imagine how much split pea soup or rice we could have had all those years! I think you would prefer no slip pea soup!
MOM

hahaaha! That makes me laugh! I love the things kids do.

You are sooo clever!!! We haven't had any crafting related incidents just yet but I am sure they will come! (goes off to find some unused cargo pants....)

Your boy is adorable! I love seeing crated things for boys, there seems to be soo much girly stuff about and with two boys I welcome the inspiration!

I have seen this bag, and it is really cute. I want one.

LOVE THIS idea, oh my! I want to get out some of my son old clothes right now :) so glad I found your blog (via One Pretty Thing)