Today I'm going to show you how to make this cute little "Captain America" t-shirt today.  I wanted my boys to have patriotic shirts for the fourth, but also something they could wear all year round.  My oldest loves super heros, so when I saw the Captain America emblem on his teeny undies the other day this idea was born.  Inspired by underoos?  Who would have thought! 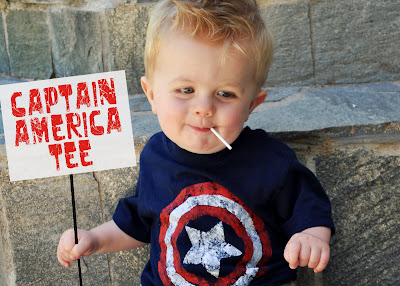 Anyhow, here's the how to on this little tee.  This is what you'll need.  (I used these Tulip paints shown, but you can use any fabric paint.) 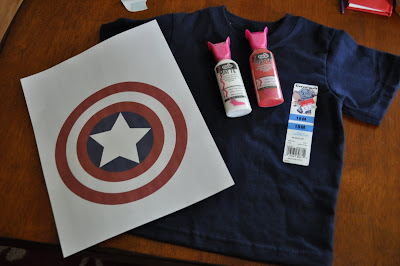 I created this image on picnik, using the geometric shapes they have available.  You can save and use this jpeg to make your own.  No sense in having to make it from scratch yourself! 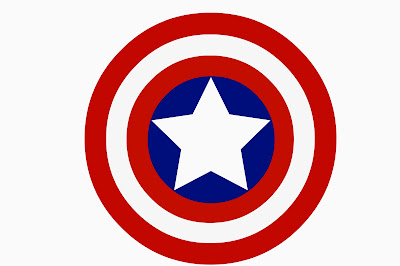 Then I created a freezer paper stencil.  If you've never done this before or if you want to see it before you try it, click HERE for my video tutorial.  It's got everything you need to know.
I ironed on my stencil and painted the white areas first.  I used some scrunched up saran wrap to apply the paint, so it would have a vintage look.  (See the red paint picture below.) 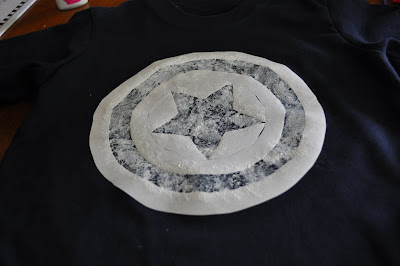 I waited for the paint to dry, peeled off the stencil and then I ironed on the other parts of the stencil.  Yes, you WILL have to iron some of your stencil over the white part you just painted, but don't worry.  It will work just fine. 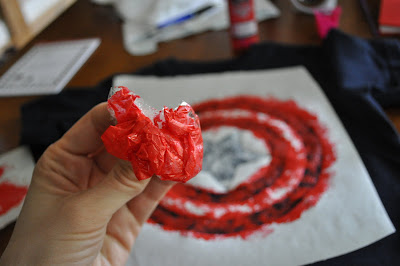 I peeled off the stencil and I actually used the star I had left as a reverse stencil for the back of the t-shirt. 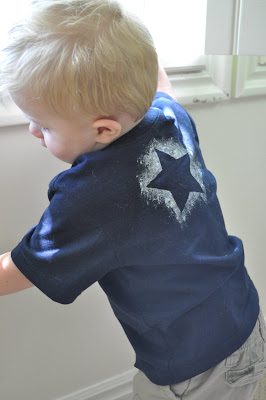 That's it!  Not only do you have a cool tee for the fourth, but you're super hip and on the ball because there is a remake of Captain America that will be released next year.  Yeah, we're cool like that. 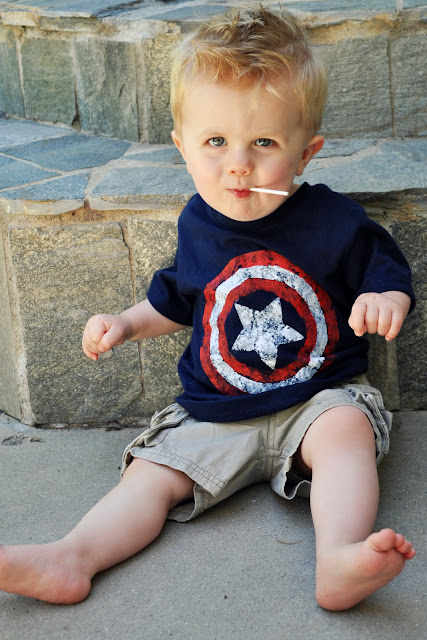 Oh, and thank you for voting over at SYTYC last week.  I made the cut!  Whew!  I'll show you which project was mine tomorrow.  Season 4 starts on July 12th, but you can catch season 3's finale today.  Thanks for dropping in!

Pin It
Email ThisBlogThis!Share to TwitterShare to FacebookShare to Pinterest
by iammommahearmeroar at 6:19 AM

You make such cute things, it makes me want a little guy! Oh wait...I wanted one before that...I guess that I was just made to have girls! :o)

What a great blog - i love busy mama!
CM x

I love the vintage look! That's kind of what I was going for with my daughter's Fathers Day shirt (posted about today), but I didn't think of using saran wrap. Maybe I should have asked you for tips before I started!

I came here from love stitched...I love the shirt you made! I can never find any DIY for boys and this was awesome! love your blog!

We love Captain America, 4th of July and America at our house and I love this idea...as always you rock. Also thanks for introducing other fun blogs to us.

applying with saran wrap is such a good idea. it looks great!

Such a cute shirt. And congrats on SYTYCC!

Congratulations on making it to Session 4. It's a crazy exciting adventure. I'm excited to see what you come up with next. Best wishes.

You are amazing! Your blog is my absolute favorite!

Holy cow that boy is cute! The shirt is awesome too!

I LOVE your blog, and have been a silent follower for a while. I am awarding you with the Beautiful Blogger Award over on my little blog. Please stop by to "accept" it!
http://babygotcraft.blogspot.com/2010/06/beautiful-monday-award-and-giveaway.html

Stopping by from Love Stitched. The shirt is adorable . . . almost as cute as the little guy wearing it - what an expression!
I hope you'll stop by Thursday & link it up to Fab Finds for the Fourth! People could use the reverse star stencil for all kinds of fun projects!
http://muralmaker1.blogspot.com

hummmm. Do I have time to make this? I really would love to do it for my son.

I loved this idea so much, I featured it today with a roundup of fun summer ideas!

Thanks so much for the inspiration!
~Alison

You are so inspirational - I love this idea. I admit it, I had to copy your idea.
http://4bergcraft.blogspot.com/

What a cute shirt--I'm always looking for boys clothes ideas. I love the way you used saran wrap for the vintage look. I'm definitely going to give that a try.

very cute and fun... my problem is I will probably have to make one for HUBBY too!!! i love it!!! thanks for sharing!!!

Very cool shirt! I'm thrilled to have an idea for my boys shirts. I saw lots of cool girlie RW&B dresses on CSI today, so how wonderful to see something geared towards the boys.

Thanks for showing us the tutorial.

so cute! i really love the star on the back!

You absolutely rock my crafting world! All of your ideas are a cut above. Thanks so much for sharing!

Stephanie Lynn @Under the Table and Dreaming said...

Oh my goodness - I had to click on this link. Your little Captain American is adorable! Love the shirt too! Super cool! ~ Stephanie Lynn

That's adorable! I wonder how many people will recognize it as Cap's logo rather than just a cute design on a shirt.

Don't show my husband, OK? He might want me to make him one :)

That's the tip I needed. I'm going to get working on some 4th Tees for our whole family!

This is so cute! Great job.

So cute! OK, I really need to go buy some freezer paper and try this out.

I don't have any little ones in my life right now, but I just HAD to pop over to say he's just too cute!!! Happy 4th!

I adore your patriotic spirit. It is red, white and bluetiful!

I hope you'll stop by for my bbq on an Anthropologie inspired white tablecloth. :)

I love the first pic with the sucker in his mouth. He is too cool for school....except I am a teacher, so maybe I shouldn't use that phrase. Anyway, super cute and congrats on CSI!

oh my gosh your little guy is adorable...and the shirt rocks! What a great idea - happy 4th

The first picture is so freakin cute!!! He's adorable :)

I love the t-shirt, so simple!

back again. First, congrats on winning on the CSI project. Second, just made my boys the shirts based on your directions/design. My AC Moore was out of navy (must be a lot of people reading your post ;-). So, I bought a light blue and red shirt. They came out great. Thanks again.

saran wrap?!?! Is that all it takes? You don't know how long I've been trying to figure out a quick way to do a vintage look. I am SOOO making this shirt first thing in the morning for 4th of July (yes, i know, i procrastinate!) Because of you I have a bunch of blank tshirts on hand for my boys! LOL

So I tried my own Captain America shirt... I did the colors a bit different so it would work on a white shirt. My Little Man looks ADORABLE! Thanks for this fun pattern!! Here is the link to our pictures:

Have a fun Fourth!

A little late on making this but hey...Serious cuteness coming from my boys in these shirts! So glad you showed how to make it all vintage looking! Here's a link to my post and pics featuring these shirts.
http://aunnajames.blogspot.com/2011/06/captain-america-tee-and-my-first-post.html

Thank you so much for this great tutorial! I made up a few of these for my boys and my nephew for the 4th of July. They came out great! Here is the link http://twincess.blogspot.com/2011/07/captain-america-shirts-and-happy-4th.html

Pinning this so I remember it for the 4th next year. VERY cute!

You are such an inspiration!

I have just printed your Captain America Shield jpg to update my sons curtain pole! I will send a photo when completed!

Thank you so much for finding me a project now my children are at school full time!

I love this. Great gift for my 3 year old to be this spring! Thank you.

so cute, thanks!!! I'm making these for all 3 of my boys this week. Love your blog...I'm a follower now.

I know this post is an oldie, but I love it and included it in a round-up on my blog today. Come check it out!