I've been adding the final touches on the craft room.  I wanted an area where I could pin up some inspiration ideas when I rip something out of a magazine.  Back when I was doing the SYTYC competition, one of the challenges was a dollar store craft.  I bought these burner covers to scheme up an idea, but I ended up doing something else.  Well, I found a fun way to use them.  See? 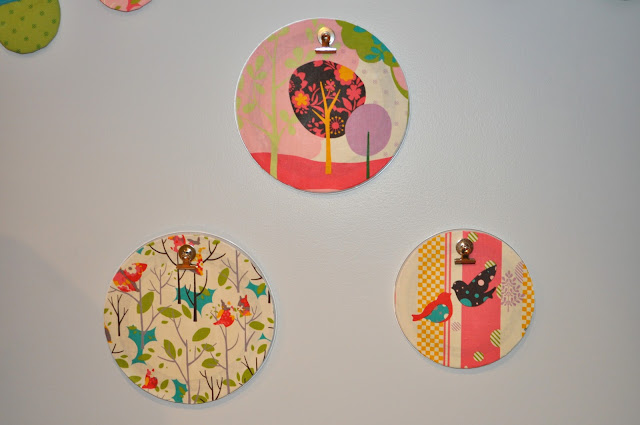 They look like this in the store.  There's 2 in a pack - one smaller and one larger.﻿ 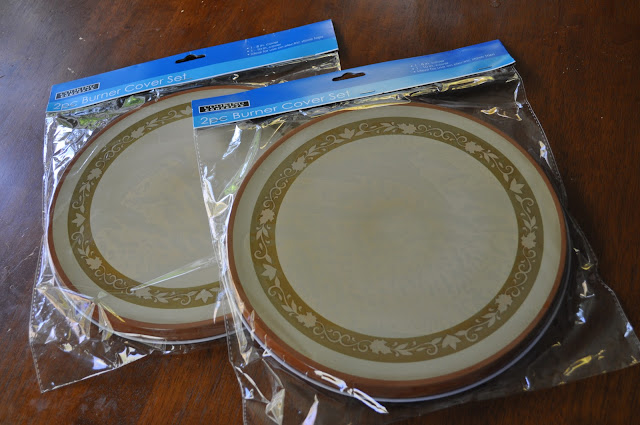 I spray painted the edges, since they wouldn't be covered.﻿ 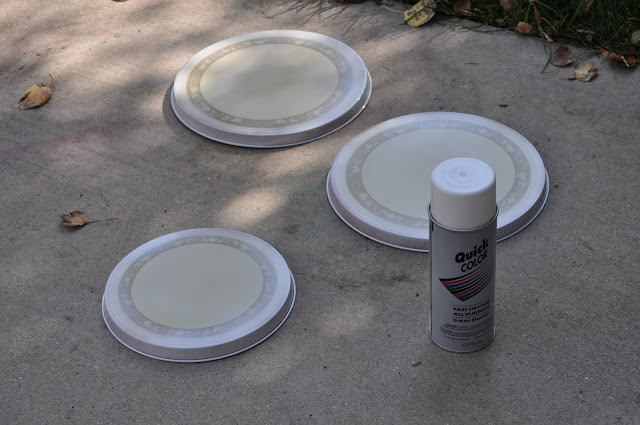 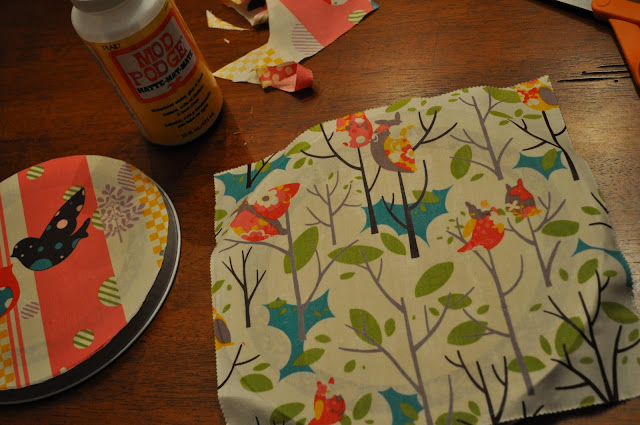 Then I bought some magnetic clips.  They were $1.50 for 4.  Since the burner covers are metal, they stay on perfectly.﻿  I hung them up in my craft room so I could post inpiration on them or even leave them blank.  It kind of has the same feel as the embroidery hoops I've seen hung up in a lot of places. 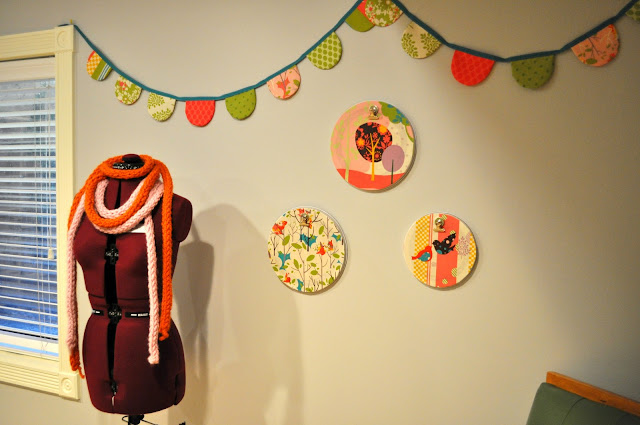 Even if you don't want to do the same project, I think there are a lot of things you could do with the burner covers.  They could be the center of giant flowers in a little girls room.  I think they would look cool spray painted different colors, glued together in an interesting formation, and used as a memo board.  Let your mind run wild! 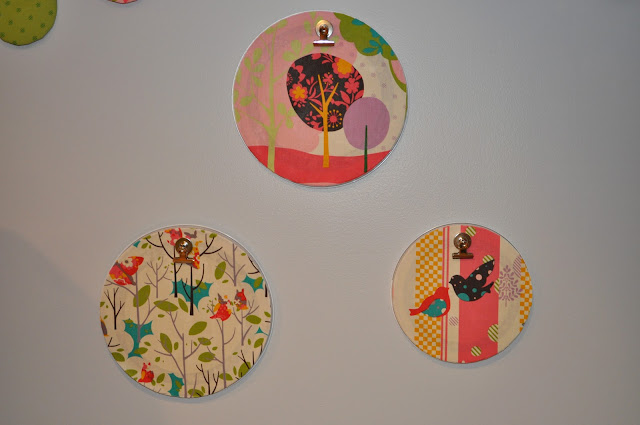 The whole craft room reveal is soon to come.  Thanks for reading my blog.  Have a lovely day.
Pin It
Email ThisBlogThis!Share to TwitterShare to FacebookShare to Pinterest
by iammommahearmeroar at 6:44 AM

Jenni at Treacle and Ink said...

So, so pretty. Such a lovely room!

What a great idea!! I may be stealing this-- Thanks!

You never cease to amaze me! I'm glad you share all these things!

Hope you'll link up for Craftify It Thursday! :D Also, we have a guest crafter - Kim from A Girl & A Glue Gun
http://lebedafamily.blogspot.com/2010/10/craftify-it-thursday-guest-craft.html

Jennifer @ Life with the Lebedas

How clever! Only you would have thought to use burner covers ; ) ha! Thanks for sharing!

This is AMAZING! Thank you for the inspiration. I've been looking for just the thing to adorn my daughters great big BLANK wall. A flower is a great idea, I'll have to give it a try and send you a pic. THANK YOU!

That's a really fun idea! Thanks for sharing.

I've been wondering how I could make an inspiration area in my sewing room, which I share with my husband (he uses it for photography & work stuff). We have a lot of cabinets in that room to close off all of our stuff, and I have this little slice of wall space that I could perhaps get away with turning into an inspiration area. This might be just contemporary enough where he won't balk at the idea!

Great idea! Love how you decorated them!

cute idea! I have burner covers from my old apt.. and I can't use them bc I have a different stove now. Definitely looking forward to up cycling them. :D

What a great idea! The possibilities are endless for these

I love these!!! My boys have been stealing tape and hanging their creations wherever they want. But when they come down so does the paint. These would be perfect. Thanks for the great idea.

These are so cute!I'm going to be coping parts of this idea!

what a good idea! You know, I've seen those burner covers at the dollar store and always think to myself, "I know I could make something cute out of that..." but i never figured out what!

These are so fun! Thanks for sharing and inspiring up:-)

really cute. loving that i found your blog...ideas gallore!

Cute fabrics! I really like those things draped over your dress form's neck.

So cute! I love that idea! The family I nanny for is adopting two girls from Ethiopia and they'll be coming home at the end of December, and she's asked me for decorating ideas for the room 3 girls will be sharing... definitely passing this along! Quick question... how did you hang yours on the wall? I'd love to make them for the girls to use as little memo boards for their artwork or notes, but I want to make sure that they'll stay attached to the wall!

When you do a post on the whole room, can you mention your dress form and whether you like it a lot...I'm wondering if it would be worthwhile to get one. Thanks, cute covers by the way. Nice use of something as something else.

I love that fabric, who makes it? Such a cute idea!

oh those are super cute! I want a craft room!

Wow! This is such a cute idea! We have been searching for a way to display our daughter's artwork and these will be perfect to hang up in the kitchen! Thank you.

what a great idea!

Brilliant idea! What fabric line is the tree fabric? So cute!

This is an awesome idea :) like Stacey I'm curious how you hung them too?

You are so BRILLIANT! I love the burner covers (and I'm planning on making mammaroars style tee-shirts for the men in my life this christmas! I'm totally gonna use this. I like to change the art in my dining room frequently - I think I'll use some of the retro christmas fabric. Thank you so much for blogging. It's SO HARD to find crafts that are cool for boys. I'll have my third in November, so glad to this new resource!

Hey Ladies, Let me answer some of your questions.

The fabric is from Moda. It's called "What a Hoot." I have an upcoming Moda post, so I'll have all the details soon and you'll also see the coordinating fabrics they sell with it. It's a super cute line.

I hung them with plastic tacks, which worked fine for me. If you're hanging them within the reach of a child, you'll probably have to do something more than that, though.

I love this idea. But instead of using fabric I am thinking of using my kids artwork and display them in their playroom. I think they would love to see them up like that.

And to think I almost threw out my burner covers! Wow this is so cool!!!