Sunshine Sunday - catching up and health

Last week was a little overwhelming for me.  I felt pretty swamped.  However, I love the feeling you get when things finally start to slow down a little more and you get to catch up.  I'm still working on the catch up part, but I love getting my house back in order and starting to check things off my list that have been waiting a while.
One of those things was giving my boys haircuts.  Even Superman gets haircuts, you know. 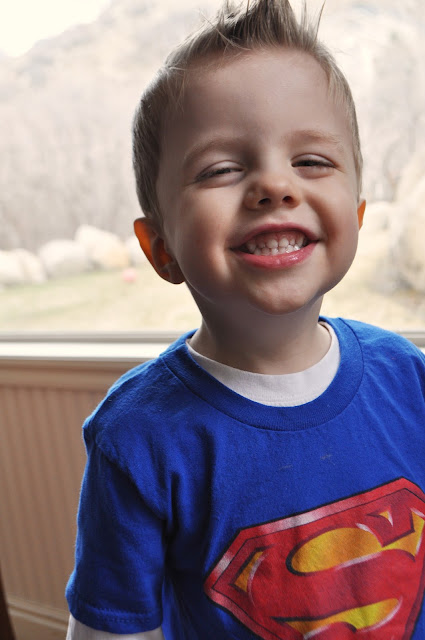 As much as I was loving Baden's hair long it was starting to bug him.  It was getting in his eyes.  So, I took off like two and a half inches.  Now he matches his brother.  He may have even lost a few pounds.  This kid has a ton of hair. 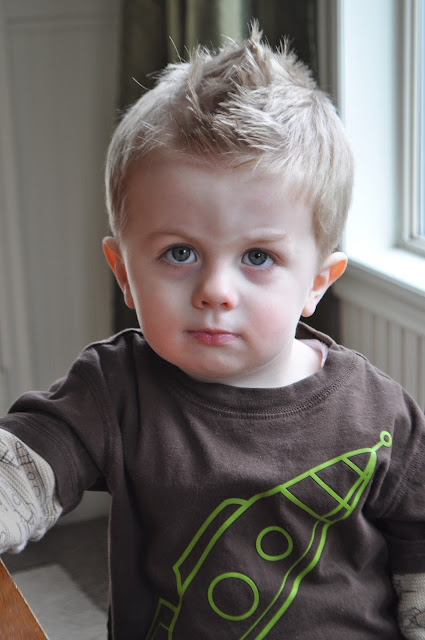 There's nothing that makes me more thankful for my health than getting sick.  I've been so lucky this winter, but something finally hit me yesterday.
A whole different thing hit Rex as well.  This is going to be too much information, but I'm going to share it anyhow.  We went to the grocery store as a family yesterday.  Rex was whining about not feeling good, but we kind of thought he was being dramtic.  In the produce area my husband had pulled out a bag to put some veggies in and Rex said he had to throw up.  The timing couldn't have been better.  My husband held out the bag and Rex tossed his cookies right into it.  Is that great teamwork or what?  I know.  Gross, but good teamwork :)﻿  We didn't even have to hear, "Clean up on aisle 12."
What were you thankful for this week?
Pin It
Email ThisBlogThis!Share to TwitterShare to FacebookShare to Pinterest
by iammommahearmeroar at 6:00 AM

Awwww, poor kid!
I hope you both get better.

It's always a bummer when the little guys get sick. Worse when mama gets sick though. Hope you all get feeling better. Great teamwork by the way! Good catch!

What a great save by Dad!

Not to be gross, but I told my sister who just had a baby that you know you are a real mom when you catch that stuff in your hands! Yuck! I always have that experience of I can't believe I just did that!

Sorry to hear you are under the weather...but I also have this awful stomach bug. So today, I am very grateful for my wonderful hubby who has let me sleep most of the weekend to get better! He also let me sew yesterday without complaining as it was a good distraction from feeling bad. I have the best hubby ever. Best wishes to you too.

Only a parent can appreciate that! Way to go Super Parents!! Hope you all feel better soon!
P.S. I love your blog!!!

aw, bummer. we've all got colds up in here, no throwing up though thankfully. I don't do well with throwing up. I like my kids to throw up when daddy is home to do the cleanup.
Great save! Nicely done. I had to laugh at the previous poster who mentioned trying to catch it in your hands. Olivia gagged the other day and I totally went to do that, and then looked at my SIL in horror and went, "I can't believe I just did that!" She laughed and said, "better that than having to clean it up off the floor!" Thankfully no throwing up actually occured.

Baden shirt is adorable!! Where'd it come from?

I'm always (ok, usually) thankful for all my boys for making me laugh. But this week I'm thankful for my friends....two consecutive sundays, two home cooked sunday roasts!

What are the chances of Pa being there with a bag??! That never happens.
Hope you feel better soon
fee x

Feel better! When I taught my friends and I noticed that we would all get sick on break. We figured that the stress of finals and grading hid it, and that the relaxed body let the germs finally do their deed.

Wow! What great teamwork! I was thankful for a healthy family this week after a couple weeks of the kids being sick. Sick kids are no fun!

I'm sorry but that totally made me laugh. Great timing with the bag! I am sorry to hear that you were both sick though.

I wonder how Superman cuts his super hard hair? Your kids look adorable as usual. It's nice your husband had a bag all ready!
I'm thankful this week for the warm weather and sunshine!

I think the guys look so handsome after a haircut. Hope ur fam feels better soon.

Great timing. Something happens between 3 and 13 when your kids puke goes from manageable to not so much. Had to manhandle a barf bag from my teenager....way gross! When I recovered I felt sappy that he had grown up so much. I know supa freaky, right?

Oh that sucks being sick at the same time as the kids! Hope you both feel better! This week I am grateful I finally got to bring my hubby home from the hospital!

Talk about efficient sick management! I know I get only one chance and it goes, "Mummy, I feel...sick..." BANG! Timing is everything.

My superhero got the chop today. He has a ton of hair too (I think that's the source of their power).

So sorry to hear you are sick. Get better soon you guys x

I hope you all get better soon, but that was the best throw up story!

I am totally thankful for my little girl! She has brought me sooo many smiles this week! She is almost 8 months so she is starting to become more mobile and aware of her surroundings so she can react to certain things, you know how that goes haha im just rambling anywho! Cute blog!!

I"m sorry yall aren't feeling well, but that is a great family story! I also laughed when I saw the rocket tshirt. My son had that one and for some reason it seemed to fit him for over a year... Then we got another one from his cousin, the next size up. So my son has been photographed in that shirt for about 2 years. It looks like he hasn't grown, but he has! Love it! Hope yall feel better soon!

Cherie- His shirt is from Carter's but it's a few years old. It used to be Rex's.

took my guy for a hair cut too.... worst ever!!!! it was like the hair dresser took a dull axe to his hair... close up it's all choppy. when i said short sides and back with some length in the front she said "oh a mohawk?" i should have clued in then... check out my blog for how she interpreted my instructions.... go to last thurdays post 'picture day'

Hope you're both feeling better now. I'm so thankful for technology and perfect eyesite now - had lasik surgery on Thursday.