Let me give you a little background info to introduce today's post.  My kids don't like napkins.  They are almost insulted when I push one their way.  Rex prefers to use his shirt, which isn't my favorite.  If they really need a napkin for a spill, they use a LOT for them.  Or they might only use a tiny corner of the napkin on their mouth and then they're done.  I find a lot of barely used but questionable napkins on the table throughout the day.

Well, I put an end to that.  I decided to make them some fabric ones.  It's easy, it's green, and you can save money on napkins.  It's win-win baby. 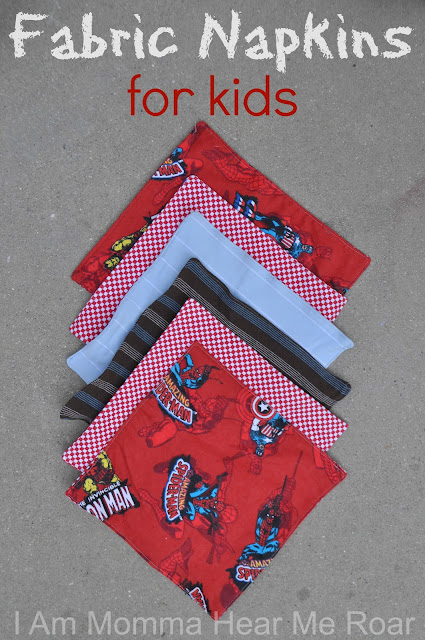 I tried to decide what would be the best fabric for the job.  I remembered that I had some burp clothes that were thicker and flannel that I really liked when the boys were babies.  I let Rex pick some flannel to start.  He picked this print - no shock there. 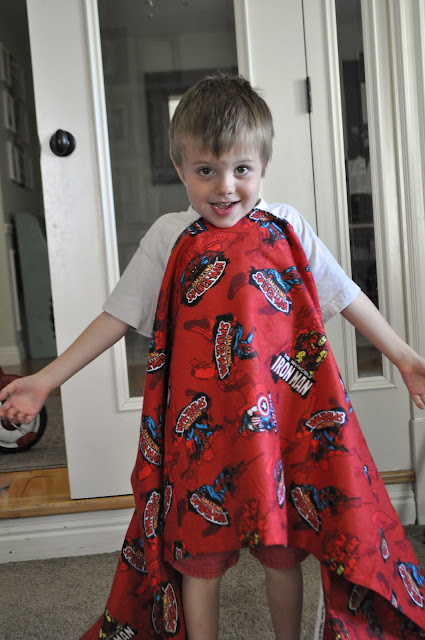 I also made some from t-shirts.  I just cut out an 11" square.  If you are unsure about sewing with knits (stretchy fabric) this would be GREAT practice for you.  If you mess up, it's just a napkin.  No biggie. 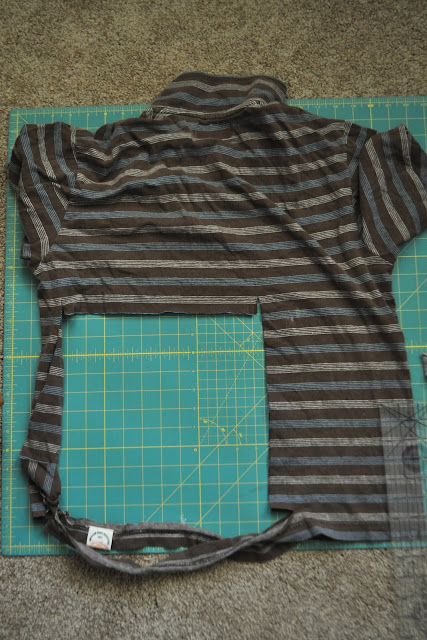 Place right sides together and sew where shown.  (Tip: I like to start in the middle of a side as shown because if you start at the corner it's a little trickier when you invert it and try to sew the hole shut.) 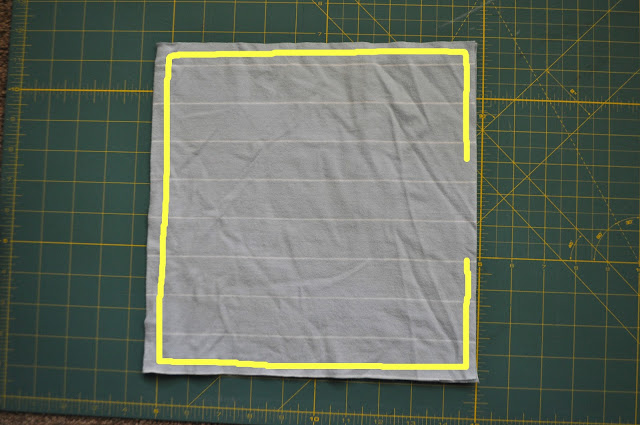 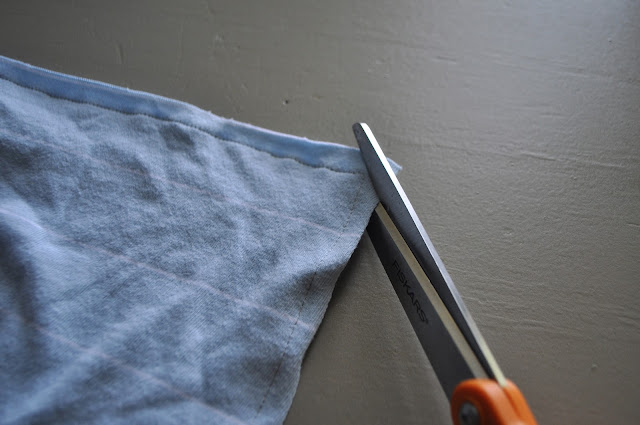 Invert, press, and top stitch the napkin all the way around, closing the hole as you do so. 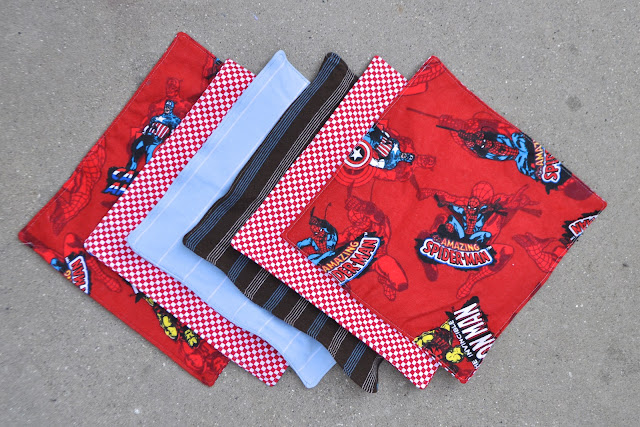 After sewing the flannel and the knit I decided to test them out, pretending I was on a detergent or diaper commercial :)  I filled two little glasses equally high and dumped them on the floor. 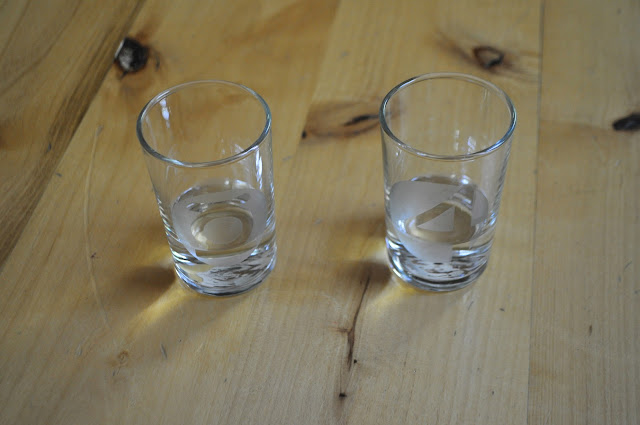 I wiped up each puddle with a different napkin.  And?  The knit one was quite a bit faster to absorb the liquid.  I think the flannel will get better with more washings, but the knit was really great. 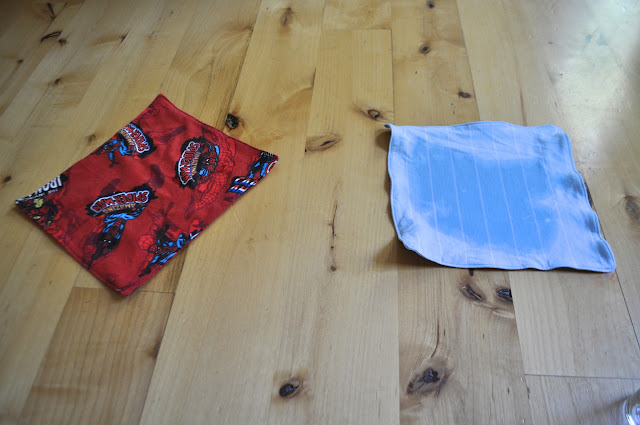 So?  Whip out those old, used t-shirts and make some napkins!

- Our shower is leaking somewhere and the water is wicking up the drywall.  Not cool.  Hello new shower.  Goodbye money I didn't want to spend on it.  Ugh.

- Want to create your own signature watermark rather then typing your blog title on every pic?  Don't have photoshop?  Check out THIS brilliant post on how to do just that.  Super smart and I'm making one.

- Rex is on HGTV's facebook page HERE as the Viking.  HGTV is doing a countdown for Halloween and you can sign up there to follow it all.
Pin It
Email ThisBlogThis!Share to TwitterShare to FacebookShare to Pinterest
by iammommahearmeroar at 6:00 AM

Yes! Yes! Yes! to fabric napkins. We did this one year for Earth day and haven't looked back. We just use the cheap college washcloths from Kohls/Target. Once I bought paper napkins, as we were having guests over, My oldest son said, "Mom you bought napkins?" Oh kiddo, you know me well.

Lovely and a great idea!
Hope you have an amazing week!

This is so Clever!! I love the idea of washable napkins. I think I'm going to make some of these this weekend!! Thanks!!

Great Mamas think alike...I made some for my girls school lunches. They think they are fun and love using them! I love your idea of different materials, I'm going to have try that!

I love this idea. And they probably love using them because they are super heroes and stuff! And the viking picture on facebook is awesome! Thanks for sharing today!

A tip... your flannel ones (and the t-shirt ones, and your towels and dish towels, too) might absorb faster if you do not use fabric softener on them (either in the rinse cycle or in the dryer).

our washer has been leaking...for a month. and i totally don't want to call a repair man cause i just don't even want to know how much to fix it! (if it's fixable!) it's always something! and that is freakin awesome that rex is on hgtv! congrats!

Wow! Rex is on the fast track to becoming a star! Way to go Cher! Your hard work is paying off.

Love this idea. Once my kids stop wanting to use a face washer then I might try this (although not sure when that will happen - they are 10 and 7 now!).

Great idea! My boy loves using his sleeve as a napkin, drives me crazy.

I just made some for my son too (to match his "new"-eBay- Tupperware). I also made some "tissues" from his old flannel PJs. Flannel is so much nicer to the nose than paper, especially if you have a cold and go thru a lot.

we've always used cloth napkins (I'm cheap!) and just started getting bandanas for the boys to use as napkins. they have fun placemats so I thought fun napkins would be cute too. we get them at hobby lobby and when I'm there, we usually pick out a new one or two (depending on who is with me ;)

Now, this makes sense. I have a hubby who doesn't much like to use a napkin, so I'm in the same boat. I hate those cheapo paper napkins, so I buy good paper ones, but I don't like to waste a barely used one. If I give him a big ole fancy store bought fabric one, he won't use it, reasoning he'll save me laundering it. A friendly little jersey napkin should break him of that habit. Maybe.

This is great. We've got quite a few fabric napkins and some wash cloths and old burp cloths and muslins that we often use as napkins. BUT I've been thinking about making some new(ish) ones from an old sheet I found at a charity shop. I just dreaded hemming all four edges of each napkin and don't have a serger...I never thought to use the method you explained in your post. THANK YOU!! This is now officially on my to-do list.

I totally agree...I remember this tip from when we used cloth diapers with our little girl.

My boys' school requires them to bring two cloth napkins in their lunchbox everyday, and for some reason (only three weeks into the school year!) I'm already missing 1/3 of the ones that I had previously made for them. I love the idea of upcycling their old tees, and I bet they will too!

Hey! Thanks for the mention! Made my day :) And what awesome kid-napkins!

I made cloth napkins for my kiddos almost 2 years ago. They're great! I like the idea of knit ones

I also made a version of this for my preschooler to use at school. Just a slight twist. I made it large enough to be a placemat. He sets his lunch out on it during lunch time each day, then uses it as a napkin as he finishes. I did the exact this you did, even used flannel, just made it rectangular.

I love this, I've been struggling with using napkins & papertowels and was going to go buy some cloth ones, so thanks for your simple idea, I'm gonna grab some shirts and go make some! You ROCK Mommie! :) Michelle W

I realize my idea isn’t anywhere near as cool but I thought I’d share nonetheless – my mom used to work for Delta as a flight attendant. She usually worked first class. You know those hot towels with lemon that they used to (still do?) give people in first class? Well, way back when, they used to THROW THEM AWAY afterwards – yep… perfectly good cotton towels… straight into the trash. My mom started bringing them home. She doesn’t fly anymore but we purchase something similar from Walmart – they’re just packs of white cotton washcloths (they come in packs of 20 I think?). They’re cheap, like $5, and wash/wear great. We use them for EVERYTHING. Then, once a week I just run a hot hot hot white load with lots of bleach and oxiclean and we use ‘em again next week. (side note: we do the same thing with flour sacks, again from Walmart, which make the MOST ABSORBANT DRYING TOWELS EVER).

That's super smart to use washcloths. What are the flour sacks? Where are those at Wal-mart? I'd love to hear more about them. Thanks!

We use cloth napkins. I haven't tried making them. I have purchased cloth napkins from the the thrift store. We use washcloths and dish towels too. Most of the time, we use "sharing napkins". Maybe some people would be weirded out by that, but most times, only my 3-year old gets a napkin fully dirty.

Flour sacks are a type of towel. They are modeled after old school flour sacks. Now they are made from a thin cotton. They do work really well. Target sells them as well. I think they are $6 for 3 or something close to that.

We were inspired to use cloth napkins by some family friends who bought four sets of cloth napkins - one for each family member. That way everyone knows whose is whose and you don't have to wash them every time. We also have a set for guests so they don't end up with my 3 year old's spaghetti-sauce encrusted one!

Another option would be to use different napkin rings for each family member (or glue a Scrabble tile to a plain ring for each person's initials) to keep the napkins separate.

I like this idea of making smaller ones for the kids (my 2 year old insists on having one like the rest of us but he usually just ends up dragging it through his food...) I'm also tempted to make a set for when we have parties - I use all glassware and "real" plates/silverware, but still bust out the paper napkins (that usually get composted, but still...).

I just cut up old t-shirts with pinking shears to use as napkins. They're not the prettiest but they work, and we don't use them for company.

I love these napkins! This is on my short list of projects to do.

And sorry about the shower... call the landlord and have them fix it. Doh. Homeownership. ;)