We don't really do allowance at our house, but usually I'll give Rex the chance to earn a dollar once a week or so.  He'll do a bunch of extra chores and then he earns his dollar.  He's not a saver yet.  He likes to blow his money on random toys he thinks are cool (but since he's only earning a dollar a week, it takes him a while to buy one.)  His latest purchase was a Hexbug. 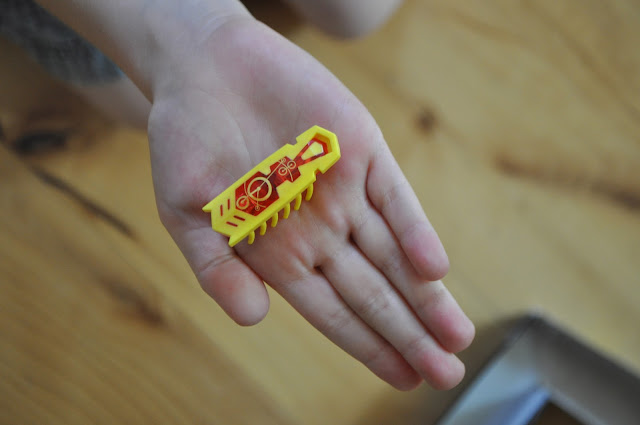 If you haven't seen them, they are these little plastic and rubber bugs that vibrate and walk around.  They're actually kind of fun.  He bought a nano, which is small and only costs $6.  I definitely wasn't going to whip out the big bucks to purchase any tracks or accessories.  I thought it would be fun to show him what we could make on our own.  So we got out some shoe boxes and cereal boxes and went to work. 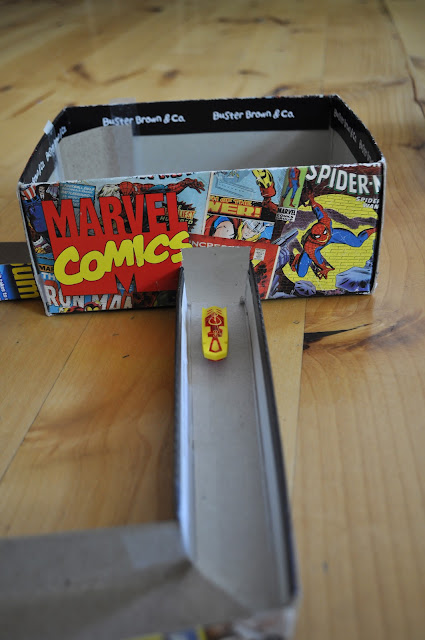 We cut and folded pieces to make tracks and taped it all together. 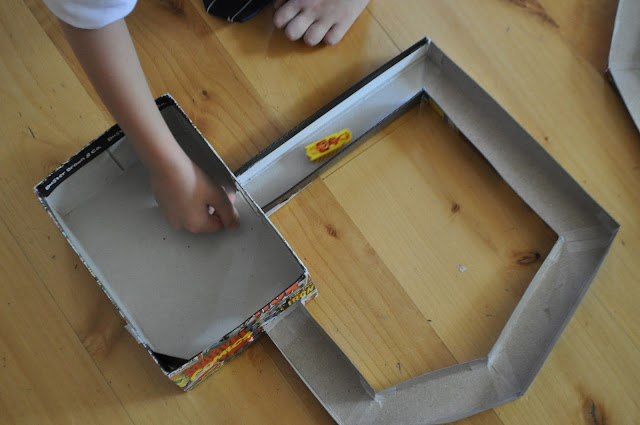 After saving his own money to buy one, Rex was really excited to know that we could make our own tracks instead of saving more money to buy some. 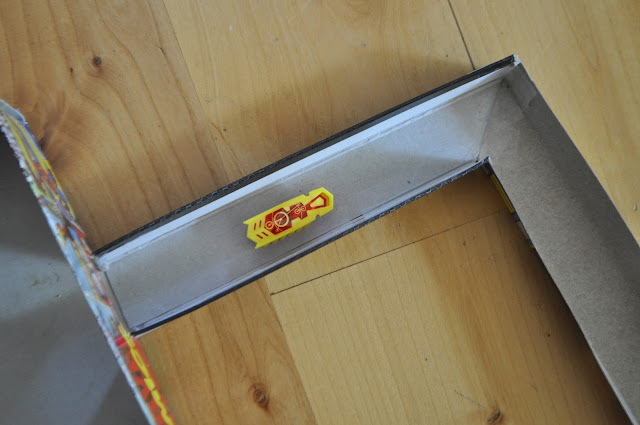 We learned quickly that they can get a little stuck in 90 degree angles so we added bumpers. 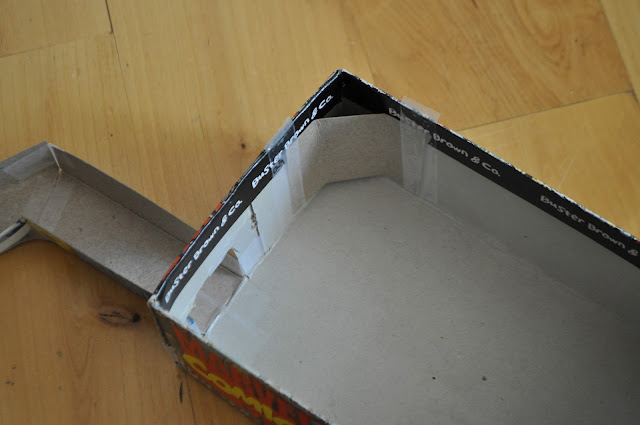 Baden bought one and we made him a track as well. 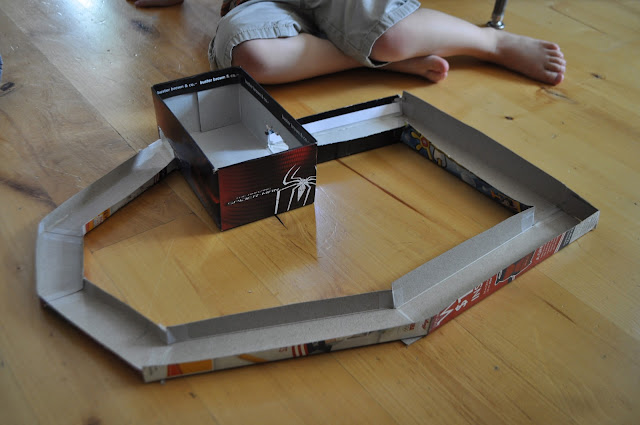 They've been the hit of the household this week.  Have you made anything fun with cereal and shoe boxes?  Feel free to leave a link.

Thanks for stopping by.  See you tomorrow.

- Look at this headboard made from rubber mats HERE.  I never would have thought of that, but it looks pretty amazing.

- Did you see Kimbo's play quilt HERE?  I thought it was so cool and smart.  If you were a quilter that would be the coolest baby gift ever.
Pin It
Email ThisBlogThis!Share to TwitterShare to FacebookShare to Pinterest
by iammommahearmeroar at 6:00 AM

This would even be great with little matchbox cars! I love that you are teaching your kids about fiscal responsibility at this tender age.

My boys have been wanting these. I didn't even know what they were, or what they did. lol Glad I know, now! Thanks for sharing.

This is just one cool track! I like the fact that your boys could personalize it and problem solve.

Love it!! And it also helps because you need all of the money you can save for Hexbug batteries!! My 20 month old likes to release them all over the house and by the time we find them they are dead...

We love hex bugs too. I have had some amazing 'habitats' constructed around here. I think it is great for their imaginations to make their own. We have some bought track as well but the most fun is had in making our own.

We love hex bugs too!!! When they need new batteries go to the watch battery section in Walmart. Near the jewelry counter.

You're a genius - my son has a farm of hex bugs and no track. However, I do have boxes!

Aren't you clever? I used to make all kinds of things like this for my kids. Do you ever look at the family fun magazine, so many great ideas like this! And thanks for the great new blogs I can follow, very cool ideas! You know I am saving that quilt idea for the grandkids.

Cute!! You are genius!!!
Aljonushka from faraway Belarus

I'm anti-allowance, too. I figure we're a Team and a Team works together to get the job done. That's not to say going above and beyond doesn't get rewarded -- it does. I think this teaches expectations, teamwork, responsibility and reliability. Good on you!

Those bugs are too cute. Sometimes I wish me teenagers were little again (sigh).

Amazon sells 100 batteries for approx $5-6 ! We had to call Hexbug because of a small issue with a bug (they are a great customer service company) and they even send the generic batteries instead of the ultra expensive Hexbug batteries :)

Genius! And what fun they had, I'm sure! My boys would love this :)
Loved the links in the watercooler too. I'm loving that feature in your daily posts!

We haven't gotten into Hexbugs yet, but I am sensing that I just stumbled upon a Christmas gift. Definitely keeping your tracks idea in mind. Very cool.

my boys love the hex bugs, too. they make tracks, rooms, etc. for them out of legos. there are infinite possibilities with them.

Super cool idea :) These would be a hit around here no doubt. This would make it so my littler guy could get into the hexbug thing better too :)