After making the fabric napkins for kids last week I needed a place to store the napkins.  They had to be accessible, but I didn't want them to be an eyesore on the table.  Here's what I came up with. 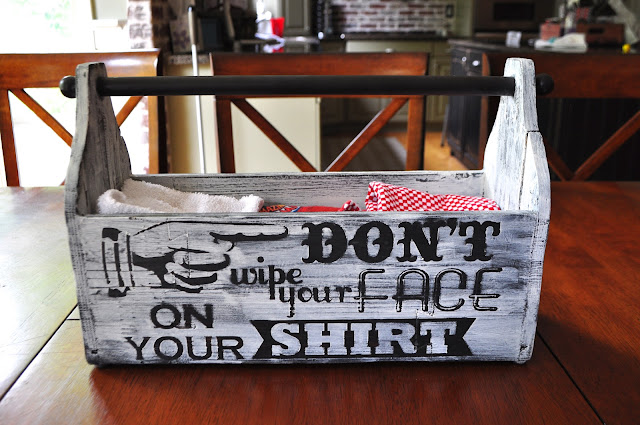 I found the holder at Hobby Lobby at 50% off.  I first bought a trunk-looking thing, but it was just too big.  I went back and got this instead. 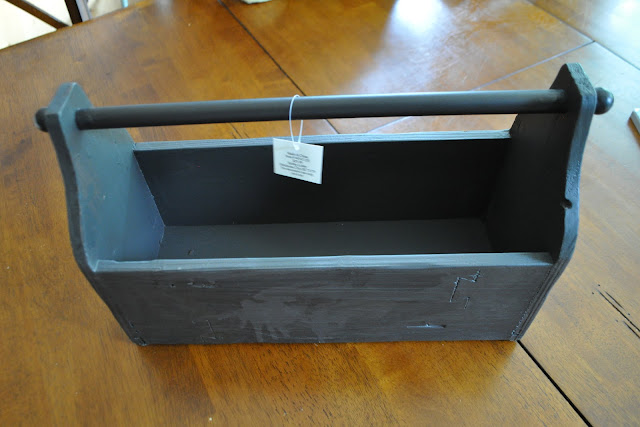 Random Sidenote: A long time ago I found a really funny song on iTunes called, "Don't Wipe Your Face On Your Shirt."  It's a silly song that talks about how the kids can do pretty much anything EXCEPT wiping their face on their shirt.  It says, "You can eat that tub of lard but if you throw up in the yard, don't wipe your face on your shirt."  My boys and I think it's pretty funny.

So I designed and cut some vinyl and stuck it to the napkin holder.  It didn't adhere super well due to the cracks on the wood, so I thought I'd paint over it, using it as a stencil and then peel off the vinyl.  (You could also just easily hand-paint something on it or buy letter stickers and do what I did here.)

I used Annie Sloan's Chalk Paint for the first time.  I've heard people rave about it and I have a bigger project I'm using it for.  However, I thought this would be the best way to try it out before tackling the big project with it.  I liked it because it distressed really well. 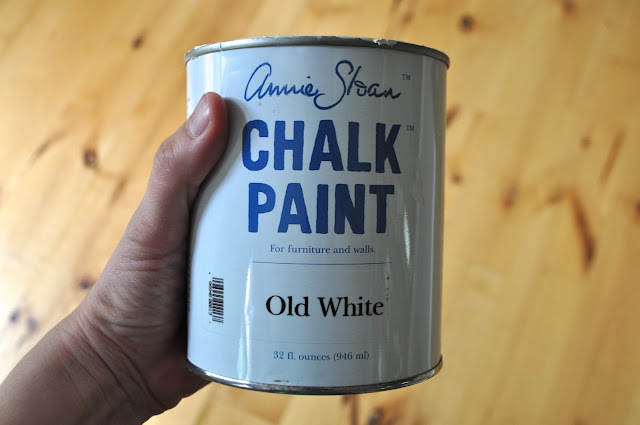 I dry-brushed it on. 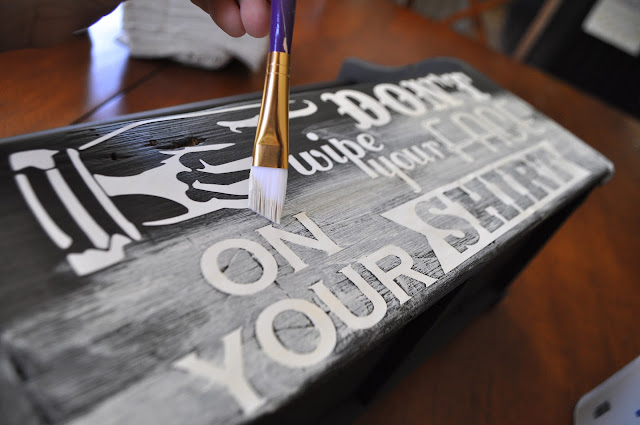 I removed the vinyl and then I sanded more of it off to make it look even more aged. 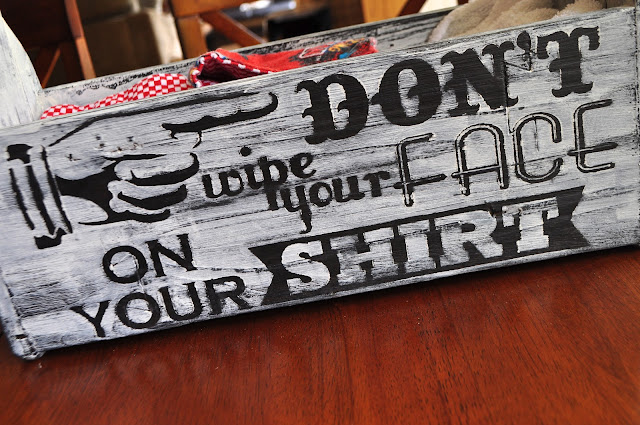 Now it holds the napkins and becomes a centerpiece all at the same time.  I added some dish rags to the pile as well (like a couple of you recommended) since I hadn't sewed enough napkins to keep it stocked 24/7. 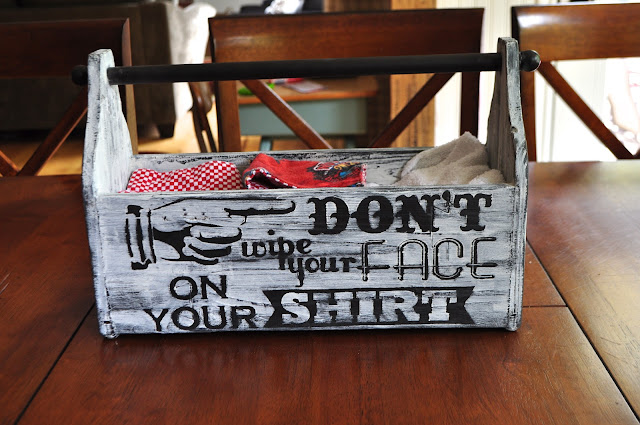 And so far the fabric napkin thing is working well.  We aren't throwing away countless napkins anymore.  Yay!

- Are you guys familiar with Project Run and Play?  It's a sewing for kids competition and it's pretty amazing to see what the contestants whip up.  Check out last week's style icon challenge HERE.

- Want to read a quick uplifting story?  I loved THIS POST by Ashley at Little Miss Momma.  She has a great way with words.
Pin It
Email ThisBlogThis!Share to TwitterShare to FacebookShare to Pinterest
by iammommahearmeroar at 6:00 AM

I love it! I find myself saying that at least 3 times a day.

Love it! So creative! I loved the napkin idea when I read it, and now a perfet home for them. I just got on the internet to research Annie Sloan paint and here is your blog with you using it the first time. Thanks for the tutorial!!!

I am a big believer in cloth napkins. I realized after leaving my parents' house 10 years ago that we wasted so many paper napkins that I barely used. No matter what, I wound up with a crumpled paper napkin in my lap, bound for the trashcan immediately after dinner. Maybe the crumpled napkin relates to the TMI question of "are you a toilet paper folder or a wadder?"

Courtney @ Ordinary Happily Ever After said...

Love it! I need to make a napkin holder now ;)

What fonts do you use? Also, where did you get that pointing finger image? I haven't been able to find one like that - not even in the online store!

Thanks for the watercooler story and reminder to "always be a little kinder than necessary". It's so true, you never know just what someone may be going through. I like the watercooler feature & appreciate the research & hunting you do to bring us all the little extras.

Crazy crazy cute! I am forever addicted to Annie's chalk paint! I've used it for at least one project in every single room of our house! I think I'll be sewing up some napkins this weekend for sure!

SUPER cute---I am totally going to make fabric napkins for my boys! They ask all the time for a napkin and I feel so wasteful:)

I just wanted to say how much I LOVE 'at the watercooler'!! I look forward to seeing what little surprise I might find at the end of each of your blogs.

Wow- that is supremely creative! I've had my silhoutte cutting machine for over a year and i still struggle to get just plain old letters out of it. I'm positive it is user error...but that is precious. We've been using cloth napkins for a while (but I still have paper towels...crazy, I know) and this looks just right for holding them. Thanks for sharing!

Wowz- totally off topic and random, but I just saw a DIY for superhero ornaments you *might* could do with Rex and the cousins. Not sure if B would be ok with glass. Anyway. Here's the link: http://www.happylooksgoodonyou.com/superhero-ornaments/#.UGI0w64mGCQ

I went and looked at Project Run and Play. WOW. Those adorable kiddos are dressed better than I am!! And I would LOVE that "First Baby" dress in my size. I totally lost my cool with the organza shoulders. Gorgeous!

You are so thoughtful! Thanks, Lacey! Those are so cool and Rex would adore them.

Cute! We use a large cookie jar on the kitchen counter. I'm hoping when the little are older I can put out napkins on the table.