When I was at Hobby Lobby the other day I saw that they now have canvas chevron there.  I purchased a yard of gray and a 1/4 yard of red with the intent to make a bag for my church stuff.  (My Granny Chic Tote has served me well, but it's so big that I knock people out in the hallways :)

Here's how it came out. 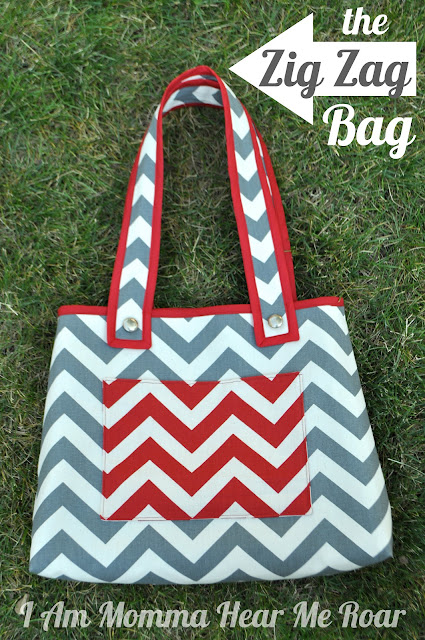 This tutorial will be rather brief in pictures, but if you have questions about any of the terms or instructions, you can reference the Tohoku Tote.  (It has really detailed instructions and the concepts are the same.)

I wanted the bag to be just big enough for a binder and a few folders.  I picked a bright cheery fabric for the inside as well. 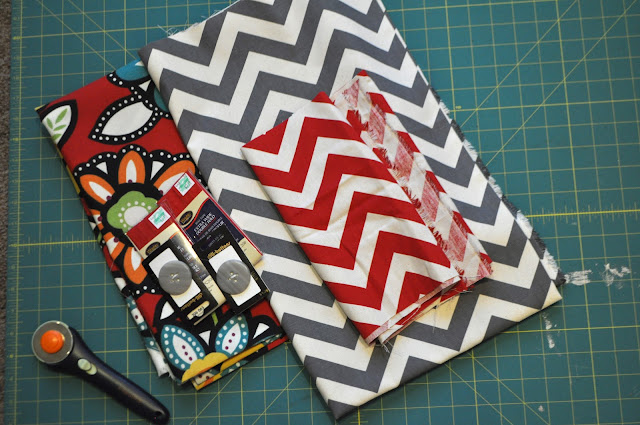 I started by cutting two pieces each of the gray chevron, sewable interfacing, and the interior fabric all this exact shape.  The measurements are included on the picture. 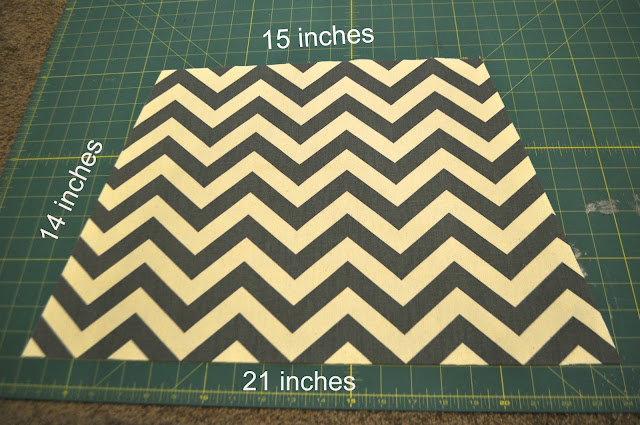 I wanted to sew the pocket on before sewing the bag together, because it's a whole lot easier.  I laid the red chevron accross the front of the bag so that the chevron would line up correctly.  Then I cut a large rectangle centered in the middle of the bag for a pocket. 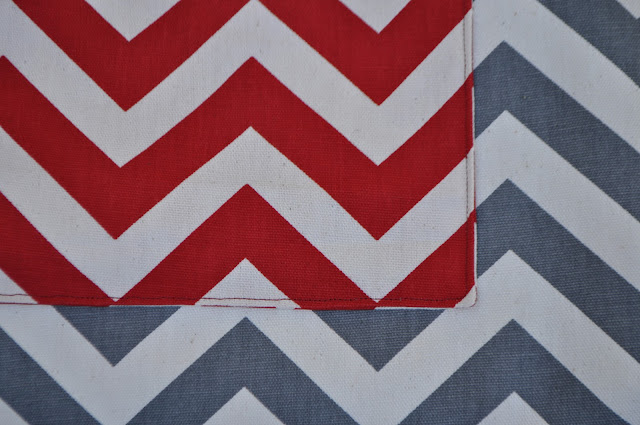 To sew the pocket I cut another piece to match it, placed them right sides together, sewed along the edges (but leaving an opening), and clipped the corners.  I inverted it, pressed it, sewed across the opening, and then sewed it onto the bag.  I sewed it slowly, trying my best to have the chevron line up. 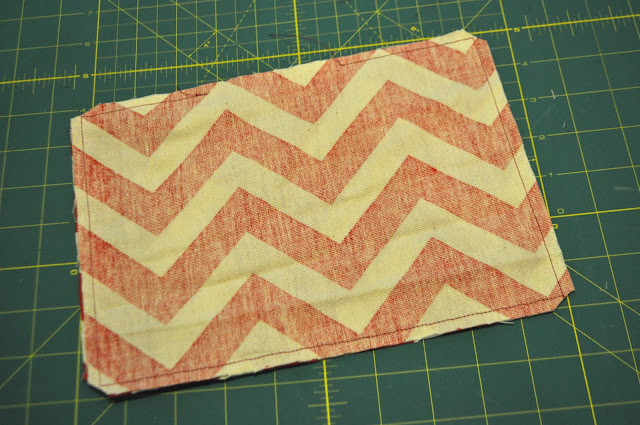 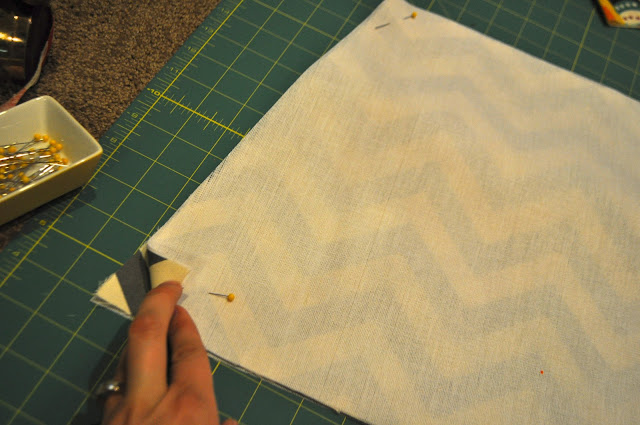 I boxed the corners of the bag about two inches up.  (Once again, if you don't know what I mean you can see the Tohoku Tote tutorial for more info on that.)

I sewed the interior pieces together the exact same way (boxing the corners as well, but not using more interfacing).  I inverted the exterior and then put the interior inside.  I used double-sided bias tape to go around the top of the bag (just like I did on the Granny Chic Tote.)  I'm not a pinner.  I just hold the bias tape on and sew along.  There is a more "proper" way to sew it on, but this works for me and it's faster. 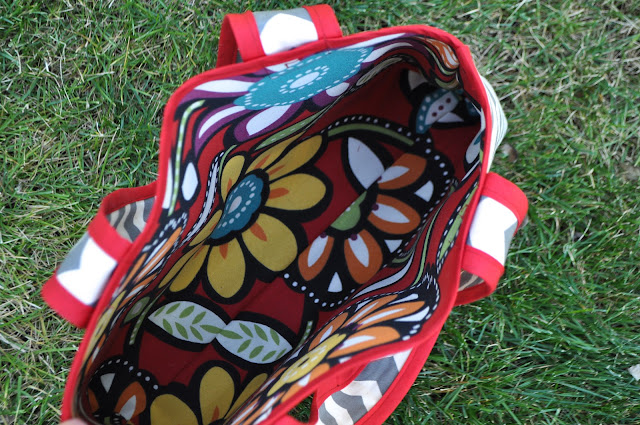 Lastly, I cut straps.  I tried to center the chevron on the strap.  I outlined them with the bias tape as well, so there was no inverting to do.  I liked how the bias tape added some additional color to the bag.  I folded the bias tape on the corners to look like a nice mitered corner, but once again there is a more proper way to do this.  I took a short cut. 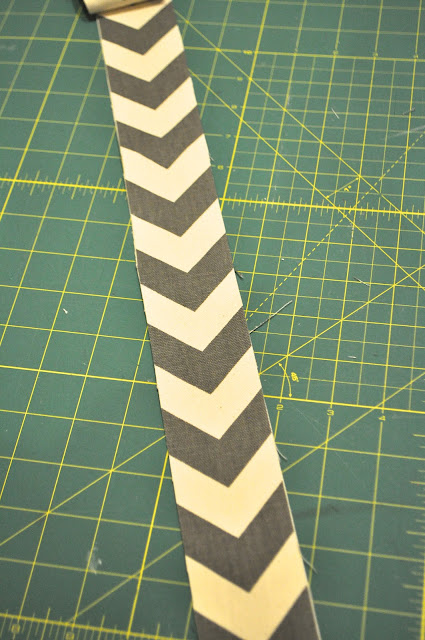 After I sewed on the straps I got some advice from an expert on which buttons to add.  Rex picked the little silver ones.  I stitched them on and called it done. 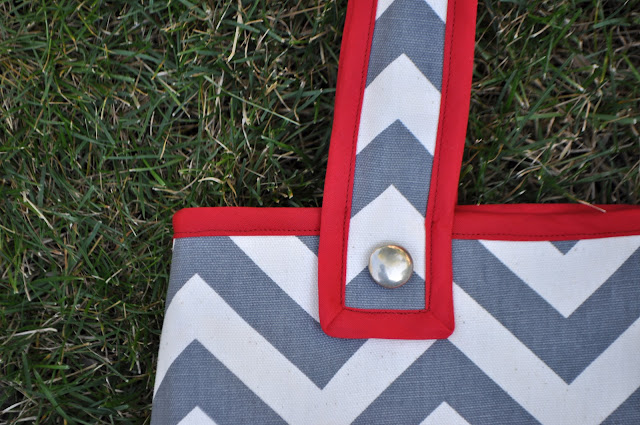 I'm loving the size and proportions of this bag.  Now no one in the hallways at church will be injured when I walk by.  Whew. 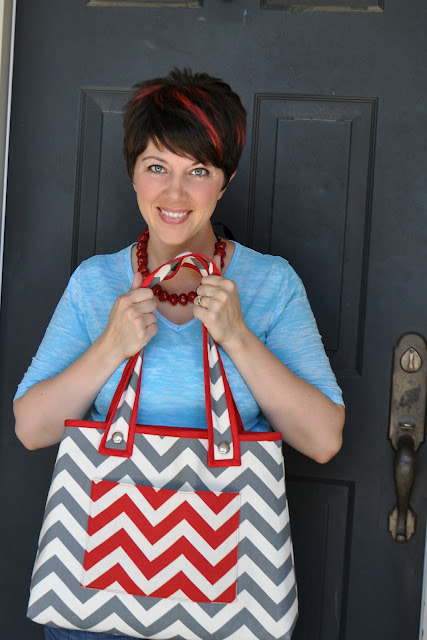 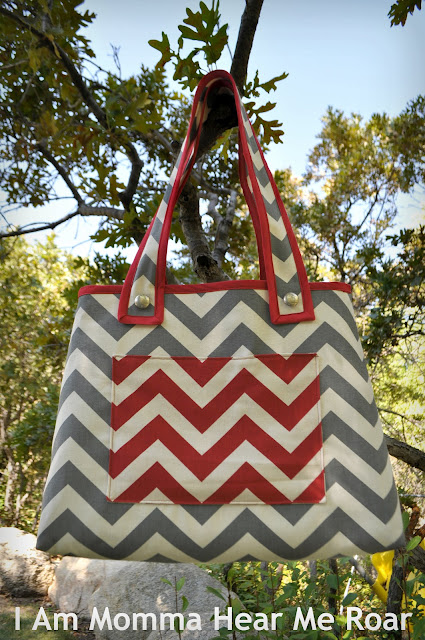 - Do you ever check stuff out at the library for yourself?  I'm watching season 5 of Project Runway when I work out right now.  I sure love that show.  Too bad I only discovered it until season 8 (I think).  We don't have cable, so I'm way behind, but I still love it.  I think it's hilarious when some of them have obvious self-given names like Suede and talk in third person.

- I thought this entry way idea was pretty fun HERE at East Coast Creative.
Pin It
Email ThisBlogThis!Share to TwitterShare to FacebookShare to Pinterest
by iammommahearmeroar at 6:00 AM

That's super cute- and looks easy enough. Thanks! And I'm sure your church friends will thank you and feel safer too :P

Very cute bag! I'm liking the chevron prints, but haven't purchased any just yet. Rex is definitely a talented picker-outer. Thanks for another sweet project!

Your bag is a-dorable! I love that you matched the pocket chevrons with the bag chevrons. And library? Oh yes, I use it. I love that my library has the option of reserving the books online, so in the way to the k I'd section, I breeze by and grab .my. books.

I am going to try to make it to the library today to pick up a book I can read while feeding my baby. And we don't have cable either! Yay for others like us! I love the lining fabric of the bag. Looks like hobby lobby got some new stuff. Too bad I don't have one here.

Love the fabric placement on the straps -- and could there ever be a better pic of you? Too cute.

Great bag! Way to match up the chevrons!!!

I think I need a library bag, too. Do you think the canvas (with the liner and all) will be too thick to use grommets to attatch the straps with instead of the buttons? I am just really into grommets right now and think the little extra detail would be a cute addition. :)

Of course grown-ups should get stuff for themselves at the library as well. Model for the little ones (though I'm sure it's hard to make the time ... I don't have any of my own but I'm around them all day at school!). If you want a couple of "quick" reads (cause they are actually middle-grade juvenile fic) you should TOTALLY request The One and Only Ivan (by Katherine Applegate) and Wonder (by R.J. Palacio). Best books on friendship and compassion and accepting others I've read in a long time.
I am now going to send my mom this link and "order" a bag. She does all my bag sewing for me. She's a little behind, though. Still waiting on MY Scaredy-Squirrel inspired one. ;]

Completely adorable! And canvas chevron?!? Yes please! I so wish we lived near a hobby lobby.....one day maybe. For now I have to order my fabric online.

its really late and I may be missing something- did you sew a button hole on the strap ends and the button on the bag and connect them that way, or were they stitched onto the bag, and button for decoration only?

LOVE this bag and it is a great size! I may have to make a church bag too!

A great, simple bag. Thanks for the tutorial. I am not a pinner, either. :-)

I love this! And your matching pattern on the front pocket is great. And I totally relate to "sewing slow" to keep the lines matched up.
I would add a pocket to the lining as well and sew a seam from top to bottom to make a narrow pocket for a couple of pens or pencils.
Here's how added inside pockets to a little bag I made. I http://janmadeit.wordpress.com/2010/12/14/size-two-denim-shorts-purse/

What an awesome bag!

I love the grey and red combo...and the bias tape totally makes it pop!

yay! i'm glad you are featured on sewmamasew!!! this bag is great.

Super cute bag! Thanks for sharing! I really love the lining!