As I mentioned at the beginning of the year, one of the things I wanted to do was design a room for Baden.  He's been in a room with frames that say "Rex" for a couple of years now and he's never picked anything himself.  At first he was stuck on a fire station, but as his project got pushed off (due to the bathroom and nursery needs) his opinion changed.

He decided he wanted a tree fort room.  We used this surf shack bed from Pottery Barn for some inspiration. 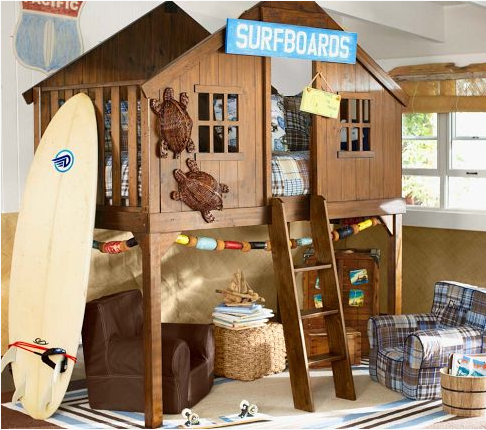 We also used this room's color scheme for inspiration.  Baden has been saying blue and orange are his favorite and I just love this color scheme too. 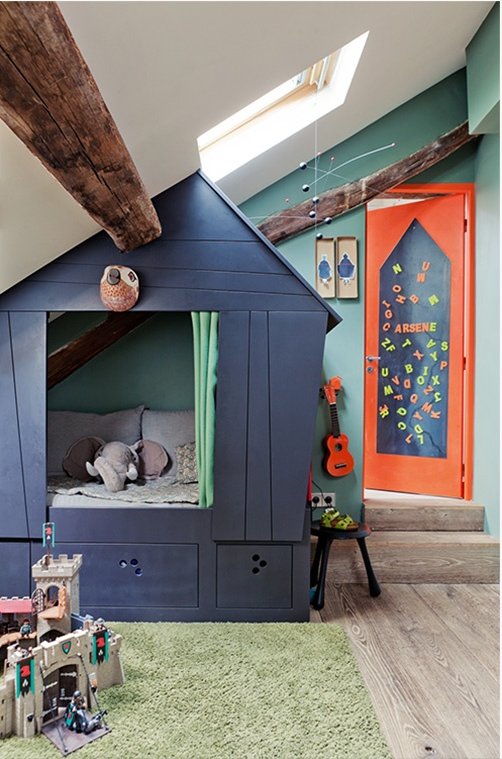 So, the building portion of the room is done (thanks to my dad who whipped this up amazingly fast), but I have a lot of painting left and then decorating.  We're now debating whether it should be a tree fort room or a surf shack, because we all think it looks like a surf shack.  Plus, Baden thinks the surf shack idea is really cool.

The shack holds his twin mattress, with room to walk around it. 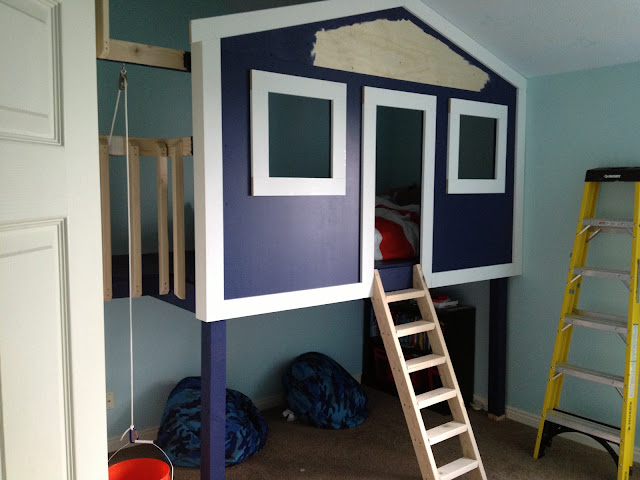 As you turn to the left there's a pulley with a bucket.  My Dad built us a real tree fort when we were kids and it had a pulley.  I remember LOVING it.  The boys are playing with it non-stop. 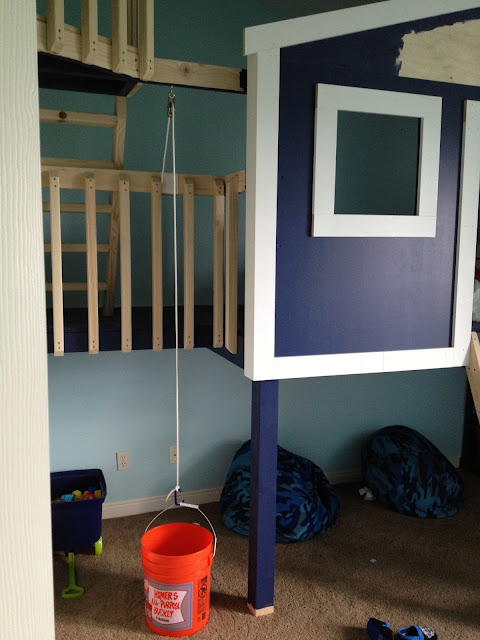 The little ladder on the left leads up to a little loft. 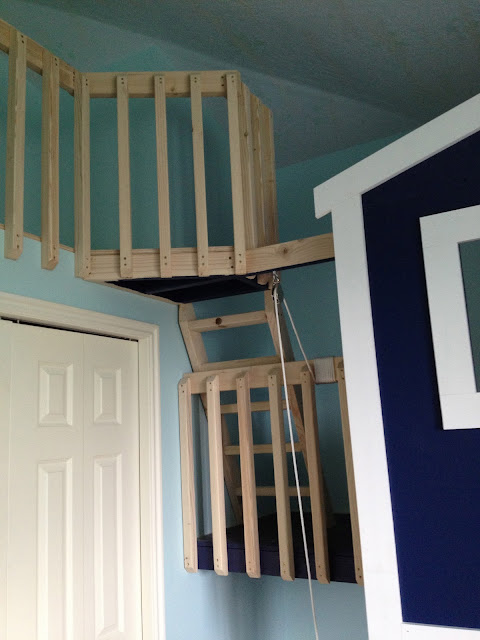 The cool thing about this particular room that we wanted to take advantage of is that there is this unused portion above the closet.  My Dad put plywood down on it to create a sturdy floor along with railing and now it's a useable, fun portion of the room. 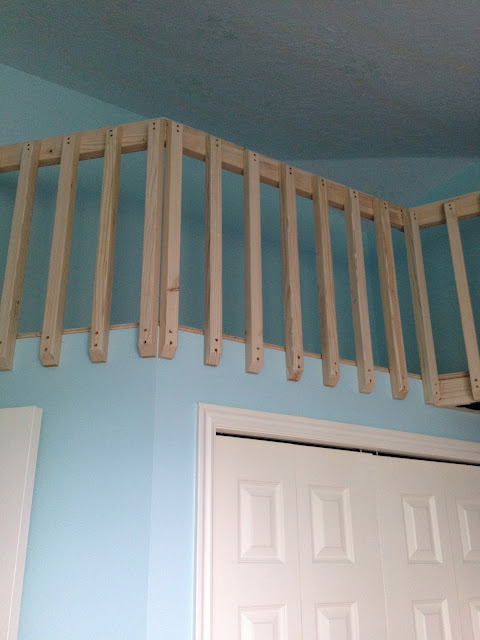 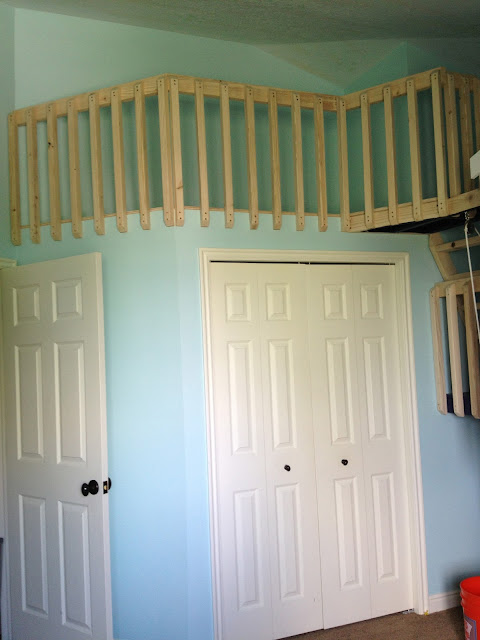 Once again, my parents have rocked it.  When we design a room I try to think about ways I can still use the room when they get older and their tastes change.  I figure this could go in the direction of a tree fort, surf shack, doll house for Elsa, or a lot of different ways.  It just depends on how you paint it and decorate the room.

So, when I come back in September I'll show you the totally finished look and the accessories, etc.  It'll be the cliffhanger episode/post here :)

Tomorrow is June and I have a few pregnancy pictures to post, but other than that I'm now signing off until September (I will post pictures of Elsa when she comes next week, though.)  I really appreciate your support and understanding as I take a break.  Thank you for the comments, the emails, the visits here, and the friendship you've offered.  I feel so lucky to have readers like you.
Pin It
Email ThisBlogThis!Share to TwitterShare to FacebookShare to Pinterest
by iammommahearmeroar at 6:00 AM

That bed is amazing! Can I borrow your dad? I love blue and orange for boys, such a nice color scheme. I'll miss your posts this summer, but it's definitely good to take a break. Can't wait to see pictures of Elsa!

This looks immense! I can't believe how talented your Dad is to make this! Good luck for when Elsa arrives, can't wait to see pics of her.

That is incredible! Way to go, I hope he loves it!
Kerri at HollyMuffin

OH man, that is so awesome! I was so impressed with the playroom (and still am!) but this takes the cake!! I've been a longtime follower of your blog and I will miss you this summer! I can't wait to see pictures of sweet Elsa!!!

Oh my!! What an awesome room!! That will be such fun!! Sounds like it already is! :)

Really cool room. Can`t wait ti see it finished in September. I have to say that I'll really miss your blog posts this summer. You're the first blog I check in on every morning. With that said, have a FANTASTIC summer with your family! Can't wait to see pictures of Elsa! You'll see, girls are so much fun (I have 2). Take care!

I want Baden's room! It looks amazing! You're parents are amazing too!
Good luck next week. I'm so excited to meet my sweet niece. Love you!

Your family totally rocks! I think the top of the closet would be an awesome reading space. I'm sure Baden will come up with something fun. I have so enjoyed looking at your blog in the mornings and will be sad for your break, but totally understand. I can't wait to see pictures of your new angel!

Fantastic room - how exciting for Baden. :) Wishing you and your family all the best this summer!!
~ Tasha

That is super cool! Love using that unused space!

Wow- You have the luckiest kids and the most handy folks! I look at those rooms and think, "oh that would be so cool" knowing I would NEVER actually get to do it, but you did! That's awesome. Enjoy your quiet time on your break with your older ones and your newest one!

amazing! this is so awesome... now I'm going to be trolling your dad's blog for details on how he did it!

Oh my goodness! Get out of my brain! I pinned the exact same picture (second in your list) for "big boy" room inspiration ( I have a two-year-old who will be welcoming a little sister this Fall). We'll be wading into this venture soon- thankfully, my hubs can build anything. I just give him a picture! :)
I'm so excited to see your end results- what a fun room for your son! Good luck with the birth of your little one- what a wonderful time for you and your growing family!

Super cool! I love the surf shack too, but any of it would be fun! That pulley is awesome, and I'm sure the kids love the loft up high too. What a great way to use the space! I will probably read tomorrows post next week (saturdays are super busy for me) so I just wanted to say that I hope everything goes well next week with delivery and that you both have a quick and good recovery. Have a wonderful summer off! Your whole family deserves it. Thanks for sharing our life with us, and I can't wait to see a picture of sweet Elsa!

Wow, what a fantastic room!! The little loft above the closet, I love that!! (I mean, kids would love that :o) )

So fun! I'll have to come over to see it when it's finished, I don't think I can wait until September. :) It will be a darling dollhouse down the road for Elsa.

You'll be missed! Best of luck with baby Elsa. Enjoy your summer!

This is so cool I wish *I* could have a room like it (for myself..haha!) Great job already! Always so impressed how much energy you have, esp. at almost-40 weeks! How are you feeling about the upcoming delivery? My due date is the 8th, and I'm getting nervous, even though I've been through it once already... :) Looking forward to seeing your little girl!

Your house must be the most fun house to grow up in. Your boys (and girl!) are so lucky!

Enjoy your summer off - looking forward to reading posts again in September. I sincerely hope the next few months are wonderful with your new baby girl!

That is super awesome! Can't wait to see the final look. Your kiddos are sure lucky to have such a fun momma.

What a great place to play and use their imaginations!

Wishing you and your family the utmost joy with the arrival of Elsa. Enjoy your summer!

That loft is amazing! Great cliffhanger. :) Can't wait to see Elsa and have a WONDERFUL summer!

That's awesome! Enjoy your new baby and the summer sun!

Wow! Was not expecting that!! Hi room is awesome! We have also decided to make our son a loft bed and he wants a slide in it. May have to include the pulley though. I'm so excite for your family as you patiently await the arrival of your newest addition and am very happy that you have decided to take some time fr you an your family. Can't wait to meet her and to see all of you back this Fall.

That room is amazing! Your kids are so lucky to have awesome parents and grandparents. Enjoy your summer and your new sweet baby!

WOW, it's a wonder your kids ever want to go outside!! They have so much cool stuff inside! Have a great summer!

Can you be my mom? Seriously that is the coolest room ever!
Ps good luck next week!

Wishing a wonderful summer off, a speedy and safe delivery and one healthy baby Elsa!

The Elephant of Surprise said...

Holy moly! That is every kid's (and maybe still mine..)dream come true!! Amazing. Enjoy your time off--hope all goes smoothly next week!

what a fantastically fun room. the amount of projects you have gotten done (while pregnant!) is astounding. is it weird to say i'll miss you over the summer? i will. enjoy that soon to come baby. good luck with everything.

Wow! Your dad is amazing! I can't wait to see Elsa. Enjoy your summer with your sweet family.

That's amazing! I can't wait to see the finished product...although, it would be every little girl's dream to turn it into a dollhouse or a castle in the sky!! thanks for sharing and have a great weekend!

ohhhh I am so jealous.. do you need another sister?? oops too old for that. you are genetically crafty, artistic.. I am so glad you are getting org ready for Elsa.anized and all

The room is amazing! I love how you used the space above with the loft! That is the perfect bedroom!!! Cannot wait to hear about Miss Elsa's arrival and I pray for a quick and healthy delivery! See you in September! :)

Wow! What a fun, fun room! I had a shelf above my closet when I lived at home, we decorated it, but what a fun idea for a child loft. Best of luck with the new baby.

Once again you have outdone yourself. This room is amazing!! What lucky kids you have.

I will miss you this summer! Hope it's full of sweet times with your growing family. Take care.

That bed is awesome and that loft idea above the closet is a perfect little hang out spot. Love it!

i love this room!!! and i love this blog! i will miss you while your gone. hope you soak up all that baby love!

Wow! What an incredible space. Your dad is amazing, and I can't wait to see what you do with it! Good luck next week. :)