I wanted to share the Valentine's I'm making for Rex to hand out so you'll have time to use the idea if you'd like.  It wasn't too hard, but it's fun and personalized - which I love.  Here they are!  They make me giggle everytime I see them. 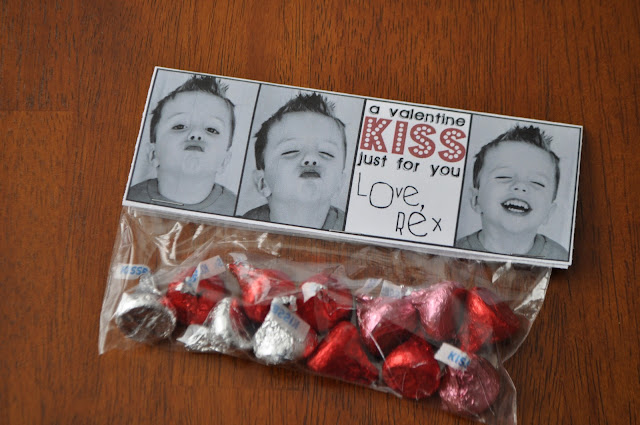 Here a close up of the label.

Want to make some?  Here are some easy steps and sneaky tips.
1) I took about 20 photos of Rex with a blank wall behind him.  That gave me 3 good ones to use.
2) I went to Picnik, clicked on collage, and uploaded the 3 pictures of Rex.  I picked the collage that has 4 squares in a line and I made the spacing tight between﻿ the pictures.  I made the backround black and adjusted the proportions until I was happy.  Then I clicked "next."
3) I edited the photos a little and switched them to black and white.  I went to "stickers" then "geometric" and used the rectangle to create the white area where I placed the text.  I added the text and saved the file.
4) I printed this one out on my own printer, but it's not the best.  I'll probably print them at Kinko's when I finish the rest.  I imported the picture into Word to make it the right size.  I wanted it to be the same width as the snack bag I was using.
5) I printed it off and cut it out, but I cut it out leaving extra paper accross the top to fold along the back.  It just folds over the baggie and gets stapled on.  Don't buy the fancy clear bags from the party section.  They are crazy expensive and a ziplock works just fine.  You can use the small snack ones or just fold over the top of a sandwich sized one.
There you have it!  Not too hard, but pretty fun.  Now he's ready to hand them out and he's been asking how many days until Valentine's day over and over.  Whoops.  I guess I shouldn't have let him see them so soon. 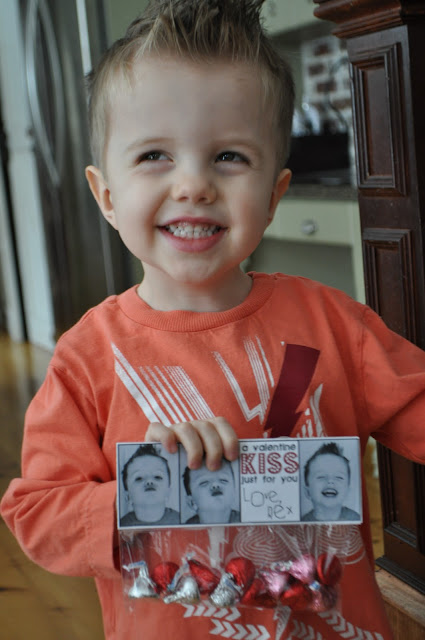 Thanks for dropping by.  Tomorrow will be a "You Roared" segment, so if you've made something inspired by this blog and haven't shown it to me just send me a picture or a link.  See you tomorrow!
Linking to Somewhat Simple, House of Hepworth's, Finding Fabulous, Fingerprints on the Fridge, and Tatertots and Jello
Pin It
Email ThisBlogThis!Share to TwitterShare to FacebookShare to Pinterest
by iammommahearmeroar at 6:00 AM

Omg, those are adorable and so creative. Thanks for the idea. I've been googling all morning for ideas.

This is such a cute idea! I wanted to do something similar for my girls preschool valentines, but alas...they won't let us pass out food items! LAME!

These are super cute! I'm puting this in my idea folder for my boys!

I adore this idea!
And Rex is crazy cute. His expressions are priceless.

Loving this!!!! Thanks for sharing.

This is too cute. I've been trying to come up with an idea for my daughter. This is great. Thanks for sharing.

those are seriously sooo adorable!!!! I made some lables for my daughter too, but I didnt think of actually using her photo. Next yesar I will have to do this! LOVE it! :) I found some adorable baggies at the dollar tree with hearts all over them, thats what we are using. :)

I don't have kids but I am going to make them for my kid's friends.

I love this!!! I am going to use it for my 4 yr old pre-k class. I was wanting to do something more unique than the average Valentine cards!!! Thank you!!!

Ha! Now that is just adorable! Rex is such a handsome little guy : ) Baby brother is a cutie pie too.

Lovin' all the crafty little projects you post. Thanks for always sharing them with us!

What a cute idea. Rex is so cute in his pictures. Way to go mom!

That is a CUTE kid!

So creative! Can you please send some of your creativity my way? Please?! ;)

Rex is so adorable!

I did something similar, but using scrapbook paper, for a baby shower. Instead of stapling the paper to the top of the bag, I sewed it on my sewing machine {in case someone doesn't have a stapler and needs another idea on how to attach}.

But I love this idea for a Valentine treat to pass out to friends at school! I wouldn't have thought to do that. Thanks for the inspiration!

Thank you SO much for the tutorial! Ive been wanting to do this but didnt know which site would be best! THANKS you're awesome!

I LOVE this! I know grandparents would enjoy getting this from my kids. I might even make one of myself to give to my husband! He would get a kick out of it!

totally gonna have to steal this idea. too cute.

Seriously, I cannot get over your creativity. This is absolutely adorable! I can't wait to try it!

GREAT idea! I just made some of these for my daughter. Thanks so much, so creative!

Umm yeah, don't look at ours on Valentine's Day they will definitely not be as cute as this!!!! So cute and creative, well done!!!!

Your a g-e-n-i-u-s!
I might have to use this idea for gift favors at a bridal shower...do you think that's corny? Oh well ;)
Biz

Once again, you amaze me! I am usually computer illiterate but I managed to figure (most) of it out! I put it up on my blog today with a link back. Thanks for the idea!

Loving this! Am pretty sure I will be dong it for my daughter's preschool. Thanks so much!

What a great idea! I love this! And your little guy is so handsome!

so so sweet, but not too sugary sweet. Love his little punk look. :)

These are gorgeous! You are a whiz on Picnic, i tell you. Our school has a no chocolate policy :( but these would be great for family.

These are so cute! I can't wait to make them!!! For those that had issues with doing food/chocolate... you could fill them with something else? There are all types of valentine items at our local stores. Stickers, erasers, a red red or pink balloon (heart shaped maybe) or Family fun tells you how to melt crayons into heart shapes...Just some ideas!

These are awesome...we did a version like this last year but had our little girl put a "valentine heart candy" the ones with the words...in between her lips! super cute! Great idea! thanks

ccaaaauuutttteee! i love his little kissy face! what an awesome idea.. i just started using picknic the other day and have yet to figure it all out, i'll have to go back to your tutorial about it!

This is adorably clever Cheri! It think it turned out great.

i love this so much! doing it right NOW!!! ♥erica

holy snot! those are cute. I think I'll do those for my youngest. My older two are way too anti-anything kiss/girl/love and I wouldn't appreciate them.

Saw this on TT&J Weekend Party and had to come see. You're little guy is such a cutie -- LOVE this idea!!

Those are SO CUTE!

These Valentines are absolutely adorable! What a great thing for Valentines Day!!

LOVE LOVE LOVE this, and tried it, but can't figure out how to make it the right size to be able to print it on 4 x 6...any tips??

I'd love for you to come link up at Inspire Me Mondays
http://singingthreelittlebirds.blogspot.com

I just made mine!!! I will post them tomorrow and link back to your post!!! I love all your ideas! Brooke
http://girlboygirlinspired.blogspot.com/
brookedouglass@yahoo.com

i just made these! thanks for such a great and unique idea. My son can't wait to hand these out

Thanks Cheri for the idea. I made some up and did a post about them. I think your site has inspired me to do more new things than any other. Thanks for all your work.
God Bless!
LT

These aer so cute. Do you know what size you used to print them out

2nd comment, just wanted to come back and say thanks again! I just did mine on Picnik for both kiddos. We had a lot of fun with it. Hope to print tomorrow!

Great post...love the idea. I just made some for my boys and posted it here:

I am LOVING this one of a kind Valentine! I better get started on mine...

Thanks for these instructions - I used them for St Patty's treats
http://www.confessionsofacookbookqueen.com/2011/01/chocolate-heart-brownie-bites.html

Darling! I'm linking to your post in my VDay round-up either today or tomorrow. :)

Thanks for the awesome tute. I'll be using this for Valentine's this year : )

Love, love, love this idea! Thank you so much.

Just got done taking my 3 kids pics. This will be so fun to send to grams and gramps that live very far away.

This is the cutest Valentine I have ever seen! I am going to use it for my babies! Thanks so much for sharing!!! :)

so cute. have you heard anything about picnik shutting down? and are there any other similar sites?

I featured this post in the round up this morning as well!

This is by far my favorite for Valentine's Day. We made these last year to give to friends. Since Picnik has shut down, is there a similar online photo editing website out there that will do the same??? I've tried searching but have come up with nothing as good as Picnik. We want to make again this year!