How I Made the Video

I was going to take the day off, in celebration of 1 year, but a few of you asked about the video and how it was made.  I thought I'd throw out a few tips if you want to make one yourself.  If you're wondering what I'm talking about, it was the video from yesterday's post.

Alright, it wasn't as hard as it looks and you don't even need a video camera.  It's just a ton of pictures.  So, get some motion going on and snap as fast as you can.  If you have a DSLR camera chances are you'll be able to snap them really quickly, especially if you put it on the sports setting.  (If you have a point and shoot camera you can still do it, but it will be a little less smooth because there will be more spacing between the pictures.)  Snap away.

Then when I loaded them onto my computer they were still in the same order, which saved me a ton of time.  My computer came with "Windows Movie Maker" which is what I used.  This is what it looks like and it's not too hard to figure out.  You import the pictures.  (I recommend having them in a folder to keep them separate and reduce confusion.) 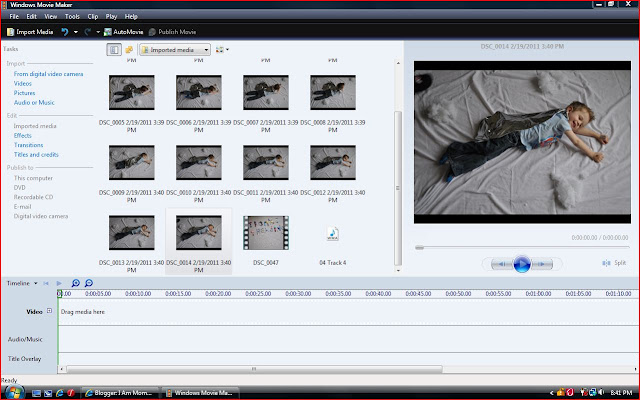 Rather than importing them into the program one by one, you can click on the first in a sequence, hold shift and click on the last picture in the sequence.  That way you grab them all.  You can do the same to grab them and drag them into the timeline at the bottom of the page.  That's where you put everything you're putting in the video.  That's like your canvas.  On this particular program I set the photo duration at .25 of a second and I did that before I started dragging the pictures into the timeline.  (Go to Tools, Options, then the Advanced tab and change the duration.)

Those are the basics to making the video.  You might have a different program, but the concepts are the same.  If you don't have a movie making program on your computer I would guess there's something free you could use online.  Anybody know of something like that?  (If you do please tell us in the comment section.)

It's pretty fun and there are a billion cool things you could do with it.  Let your mind run wild.  That's it for today.  See you tomorrow.  Thanks for reading.
Pin It
Email ThisBlogThis!Share to TwitterShare to FacebookShare to Pinterest
by iammommahearmeroar at 6:00 AM

Cool!
I didn't ask... but I was really wondering how you did that.
It was great!
and thanks for the tips.
I'm off to see if I have movie maker!

Cheri - You so read my mind! I didn't ask either, but was very curious how you created that movie. How fun! Thanks so much for taking time to share how you created it. So helpful!

looks like fun, i'm going to have to try this!

I lOVE your blog!!! I've referred to it in my own personal blog a couple times, I just can't get enough! Keep the posts a-comin'!

For a minute, I thought the song with the vid might be yours. I realized it wasn't, but you should post some of your stuff. We'd love to hear it!

i was wondering. i like the kind of video rather than a smooth video. looks really cool that way!!

This is great! My grandma's 90th birthday is coming up in a week and I've been stumped as to what to do for her. Now I'll just make a spiffy video of my kids for her! Thanks so much!

That's cool Cheri!!! I loved the video and have used Movie Maker before but never made the leap to using a bunch of stills to that effect. See, you're inspiring even when you're not trying :) I also thought it was you singing as I imagined that's how your voice would sound!

Quite possibly the cutest video ever! Your family is so much fun!
Biz

LOVE THIS!!! Thank you for sharing... I had NO IDEA it was that simple and that I even had a movie maker program on my computer!!!! Mother's Day gift DONE! Much love... love your blog...

Amanda - It's Mushaboom by Feist.

That's great! I have movie maker too and I took a series of pics like this once - I am going to have to try this soon. I'm bookmarking this for future reference in case I forget.

(p.s. this is my first time visiting your blog. hi!)

New to your blog, love this post though. I wish I could find the video you are talking about. Would it be possible to have a link put in the article.

blogger - There is a link in the first paragraph, or you can click on "Older Post" at the end and it'll take you there as well.