This week's experience was really fun for us.  I bought some cookies.  (I always buy them if I'm giving them to someone I don't know so they don't throw away homemade ones, thinking I'm a nut case.)  We originally were going to try and take them to some dispatchers, but we went on a wild goose chase trying and never found them.  So, we headed to the fire station instead. 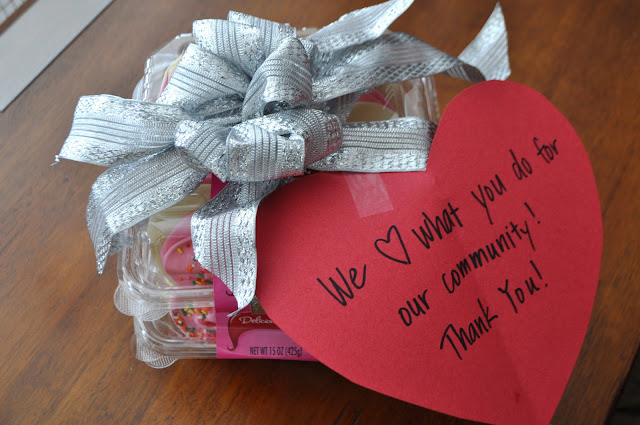 We were greeted by a really kind firefighter who offered to let my boys see the fire trucks and sit in them.  He let me take pictures (which are on my phone and I'm not sure how to get them off) and he gave the boys stickers and pencils.
While we were there they had to leave for a call and we got to watch them pull away with their sirens on and everything.  I thought it would be more fun to hear Rex vlog about it rather than me.  (The video is super short and he doesn't mention anything I didn't say already, so if you can't watch it you're not missing out.  The second part is hard to hear, but he's saying "hear my momma roar.") ﻿
Rex wasn't as playful at the fire station as he was in the video.  He was more like a teenager meeting a rock star.  He just stared at the firefighter with his little mouth hanging open.  It was seriously funny.
Okay, let's talk about this week's challenge.  This challenge may not even seem like a good deed, but it's something I'm trying to work on personally.  The challenge is to listen.  Sometimes I find myself saying, "I don't know" to my kids' questions because I'm busy doing something else.  This week I'm going to try hard to give them my full attention when they are talking.  This doesn't have to be about kids, though.  It's a challenge to truly listen to everyone you come across.  Maybe it's a stressed friend who just needs to know you care.  Maybe it's someone who needs to vent.  Maybe it's a person who feels alone.
I know that this challenge is a hard thing to gauge, but I also know it's really important.  I might write it on my hand to help me remember it throughout the week.
“Listening is a magnetic and strange thing, a creative force. The friends who listen to us are the ones we move toward. When we are listened to, it creates us, makes us unfold and expand.”
-Anonymous
Now, how did your week go?  Did you do something for a public service worker?  Let's hear about it!
Thanks for reading.
Pin It
Email ThisBlogThis!Share to TwitterShare to FacebookShare to Pinterest
by iammommahearmeroar at 6:00 AM

lol as an ex-dispatcher, I thank you for at least thinking of them! They really tend to be under-loved. Also, they're usually in the PD or Sheriff's Department in a tiny little office that may or may not be accessible through a little window to the public. The best way to catch them may be to CALL the department and ask for dispatch, and ask them directly. Nobody's going to object to cookies!

Also, you have the cutest son!

O M G I LOVE seeing your sweet men but to actually SEE one of them is even more heart-melting!!! Thank you for that!~

I look forward to reading your blog every single morning! It always manages to me bring a smile, some encouragement, or some wonderfully creative ideas! I just wanted to say thank you to you and that I would send YOU some cookies if I could! Your boys are so adorable and you are doing such an awesome thing working so hard to teach them to be so thoughtful and so considerate of others. You rock! Just wanted you to know.

So I really love the fact that your son wants to be iron man when he grows up. I literally lol'd when he said that. Soooo cute! I have a little 1 year old and I know that super hero facination is not too far away :)

What a WONDERFUL idea. I'm always trying to think of ways to give back but with two little ones in tow ... it isn't always so easy. This is an awesome idea that benefits everyone involved. Plus we have a fire station right around the corner!

I love your Wake up Wednesday posts. Oh, and this is the first time I have been by your blog without the help of Reader since you redesigned it. Love it!

oh Rex is so dang cute! i loved his video. from what you've told us about him, i knew he was going to say he wanted to be iron man haha

I am very lucky to a wonderful firefighter. They LOVE getting any sort of food, cards, and thank yous! They work very hard at what they do! Thank you for thinking of the ones in your neighborhood!
(Also, my kids still get awed at the trucks every time we go to the firehouse.)

I was planning on doing that tomorrow for our garbage man! He is just the best -- he actually comes up to the house to get the can if we forget to put it out! So we are going to leave him some cookies on the can with a big bow, and hope that they don't also get taken with the trash! (We'll be watching from the window - if it were warmer outside we would hand-deliver) I appreciate your idea of store-bought cookies, I was thinking that he might be wary of eating homemade ones from a stranger!

that's such a nice thing to do! it must have been so cute watching your son being awed!

What a great thing you did! I bet they loved it! I 4 year old LOVES Iron Man too :D

Hi :) Just found your blog a few days ago, but wanted to thank you for the challenge this week. I definitely do the "I don't know" thing way too often. And strangely I say "yes" to things without thinking, too. Then I have to say, "wait, I meant no." You can guess how that goes over.

I love your Wednesday challenges. We baked chocolate chip cookies today for our mail man and plan to leave them for him tomorrow. I too wonder if public service people will eat homebaked goods so I introduced myself to him on Monday and asked him if he would accept it and he said yes! I will definitely try to listen more this week too. :)

That is such a great idea! Thanks for the inspiration I think I will have my son take some cookies to the either the police station or fire house (his choice)! SPREADING THE LOVE!

Thanks so much for the thought! We dispatchers love cookies :) But the boys getting to see a firefighter is WAY more fun for sure! So cute.

so often we are so caught up in telling our life story we forget the most important part of a relationship-listening. thanks for making me stop and re-think my approach to everyday situations. great advice!

At Halloween time when you get SOOO much candy, I drop all the extras to the police station or the fire station.. They are all excited and just love all that candy..
Going to go see the grandchildren in couple of weeks.ages 10-12 and 14. I told them I was going to teach them how to made yeast bread and cookies and we were going to give it away...to the nieghbors. They were excited.

You are adorable. I love your blog and the way you inspire people to be better. Thank you for trying to find the dispatchers. That was so sweet. The listening challenge will be challenging this week. I'm very good at multi-tasking but that doesn't usually make for great listening. Thanks for all you do. Your son is so stinkin' cute!

i don't know if you've figured out how to get the pictures off your phone yet, but you can just text them to your e-mail. set up a picture text like normal, then put your e-mail address in the place you normally put the telephone number. it'll work.

Thanks for sharing-what a great challenge to simply listen. This is something I must work on as a teacher who is asked hundreds of questions each day by my 2nd graders. I need to intently listen to each question and give meaningful responses instead of "later" or "we'll see". I have a great quote displayed in my home that resonates with this post: "Real friends are those who ask how you are and wait to hear the answer." Blessings on your day!

Thanks so much for this post yesterday... It made me wanna get out and get to the fire station! When I told my daughter Isabella (3 yrs old) she was super excited!! We took some Cookies and pictures she colored and went to our local fire station! The fire fighters were so pleasant and even let her sit in a truck!! Thanks for the sweet ideas!!

Just started reading your blog, but I wanted to let you know I love it so far! Also, as a police & fire dispatcher, I think that's really cool you thought of the ones in your city! If their dispatch center is anything like mine, it's probably hidden in an old basement somewhere in the city! lol =) Anyhow, I know our firefighters love the surprises people drop off for them at the stations & I'm sure yours did to! Thanks for all the great ideas on your blog! =)

Great idea! Rex is too cute in the video - you are so lucky, your boys are precious!
Thanks for another inspiring Wake Up Wednesday

I love this weeks challenge. I think I accidently started mine today :) .Your boy is adorable x

Keeping you in mind, I met my mail carrier at the box with a few chocolate dipped oreos (which I did not make, but were sent to me by a friend!)... :-)