This year I picked a word to focus on.  My goals are centered around this word.  My word is "stretch."  I'm trying to reach outside myself a bit more this year and I wanted to put my word up somewhere where I would see it.  So, today I'm going to show you what I did.  It was cheap and fairly easy to do. 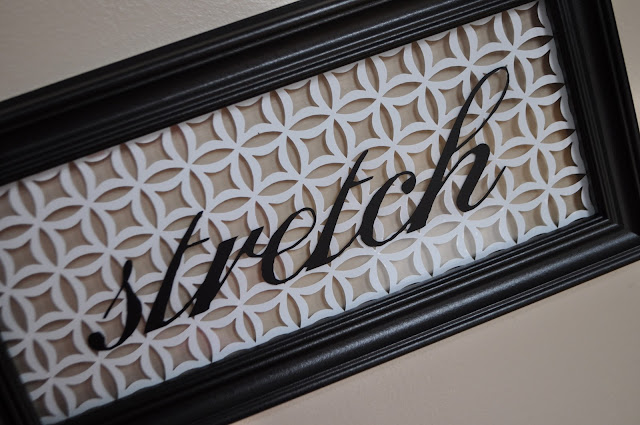 I bought a long narrow frame from Wal-mart for $3.  I used my Silhouette to cut out the white background.  (It's "starburst grid" if you want it in their online store.)   I pressed it onto the backside of the glass so that what you actually see when you look at the frame straight on is the sticky part.  I cut off the flap on the back of the frame. 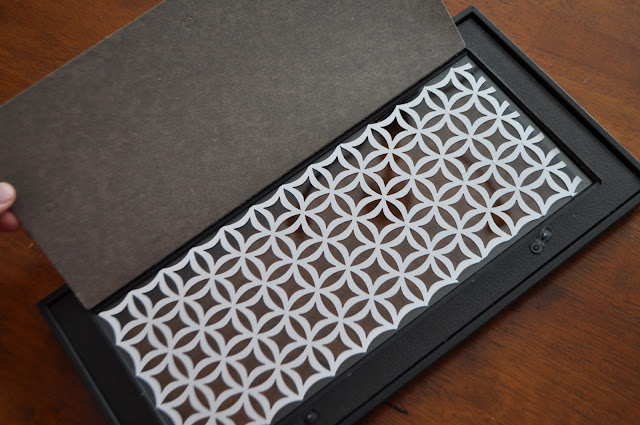 Now this is what I had left.  I cut out my word, which I placed on the front side of the glass.  That way when I want to change my word next year I can peel it off, but the white background will remain because it's on the other side.  I'll add my new word on the front again. 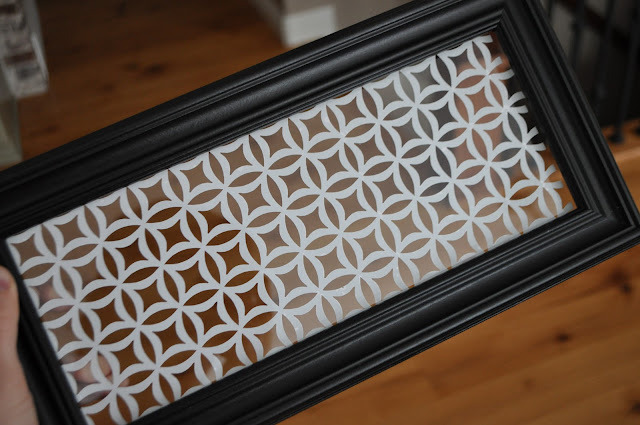 I used some glue dots to keep the glass in since I removed the flap that would normally hold it. 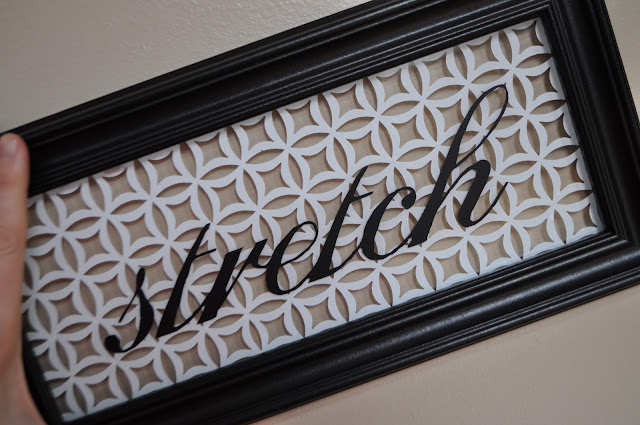 And there you have it.  It's not hung up yet (hence my hand is in the picture holding it up).  It's actually part of a big gallery area I'm finishing that goes down my stairway.  I'll show it to you later this week.  (Oh...the suspense.)
Thank you so much for reading.
Pin It
Email ThisBlogThis!Share to TwitterShare to FacebookShare to Pinterest
by iammommahearmeroar at 6:00 AM

What a beautiful reminder of your goals this year. I love the idea of having a word and relating your goals and plans to it.

Thanks for the inspiration. :)

Awesome! I LOVE it!

I love this!!!! I wish I were better at being so creative. Maybe if I get me a silhouette it will help me ;)

I love this idea! I am going to definitely do something fun like this in my house, too.

Very creative. I like the word you chose. It seems like there is nothin' you can't do with that silloette. It's awesome! I can't wait to see what you do down the stairs because I've been thinking of doing something to my stairway. I'm not sure it will survive the kids with all the stuff they throw around-- but I might try anyway.

I love it. It is so neat. You just keep creating. You are so talented and a great mom and wife. I can't wait to see the wall going down stairs.

It turned out cute, and it is a great theme for the year. At New Beginnigs last year, one of the other leaders used the example of how when you stand under a spotlight you are surrounded by a tiny sphere of light. You don't know what's beyond in the darkness. If you step out of your comfort zone to learn something new, your sphere of light a tiny bit more, as well as your knowledge. The main point that I loved was...The more you step out of the comfort zone the larger your light becomes:)

What a great idea I never thought of making a background with my cricit!

This is perfect! I'm in the middle of making a gallery for our bedroom wall...I may need to figure out how to get my hands on vinyl lettering to make myself one of these with my word of the year.

DUNDUNDUNNNN... cliffhanger post!
I really like that sign. I can't remember if I was going to do a word of the year or a text of the year or what. I don't know. What did i have for breakfast again?
Actually, in my jokingness I just realized I forgot to eat breakfast. Point in case. Wow.

I have to redo my gallery wall soonish. It's missing something. Uh, someONE. Should really put the baby in there, hey? Plus I'm moving it to the opposite wall because the layout of the house has changed and the gallery wall went from being centered over a couch in the center of the room .... to be offcentered to the couch on the far side of a really long wall. It's like my house is in the awkward teenager phase. renos. What can I say.

This is so funny, I picked the word determined this year and last night as I lay in my bed instead of sleeping I was thinking about the word and visualizing about what that looks like for me and I thought I need to have that word all over my house! Hmmmm, think I need to pop out the Silhouette machine!

I love that you have a new word that covers so many bases! Just think how fit you will get too :)

I totally agree that we all need to stretch outside ourselves and find new challenges. I love your sign and wish I had a Silhouette to duplicate it!

I love this idea! I think words are powerful. I love the way you have framed it, too. What will my word of the year be? or maybe I will choose a verse of the year. Great project!

Thank you! I saw this yesterday and thought it would be perfect for a quick bday gift I needed. Got my $3 frame today and put it together but I ended up etching the glass and removing the vinyl after the etching was done. I LOVE IT! I never would have come up with it on my own! Good thing the frames were $3 and i bought one for me too :)

I love this project! I have a cricut though but would love to find an svg file to cut that out!

This is really cool! Makes me wish I had a silhouette.