Last week's challenge was to do something kind for someone that bugs you.  I did that, but frankly, I don't want to disclose all the details.  It went well. 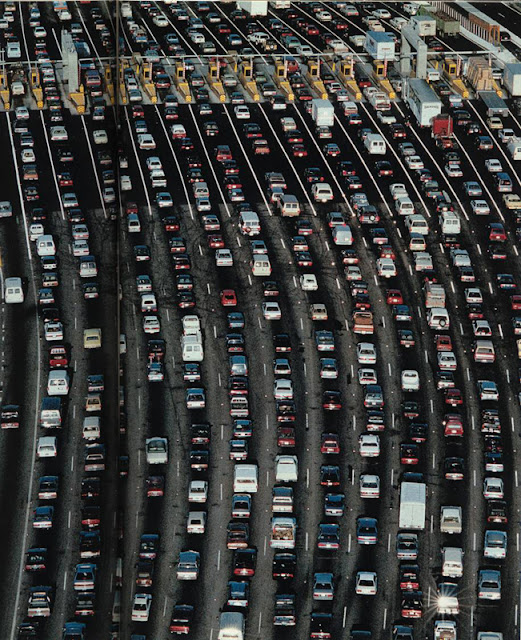 [Source]
This week's challenge is to be a patient driver.  This was actually suggested by a reader:
This morning I had to run an errand, and to be honest, I'm not a fan of driving. I'm especially not a fan of crossing the street when there's a TON of traffic. On top of that, I needed to turn left, and the people GOING left had a red light. More and more traffic was coming. I was getting irritated. To my surprise, a man actually stopped pretty far back to let me in.


I was so happy. I even, out loud, said "Oh that was so nice of him!" and I think I thanked him at least three times.


Then I thought of you and your Wake Up Wednesday. Maybe a theme could be to "be a better driver." Let someone cut infront of you, don't drive in the left lane unless you're passing, don't cut people off, etc. I don't know. Just a suggestion! :)
I can definitely work on that one myself.  I also hate driving and I can recognize my impatience by the fact that whenever we are stopped at a light or stop sign Baden pipes up from the back seat and says, "Come on, dude!"  He's heard me that from me a bit, I guess :)  Whoops!
So, did you get a chance to do something kind for someone that bugs you?  I'd love to hear about it!  Thanks for being here.
Pin It
Email ThisBlogThis!Share to TwitterShare to FacebookShare to Pinterest
by iammommahearmeroar at 6:00 AM

I have this one in the bag. I have told my husband the very fact that bad stuff happens to be is proof that there is no such thing as karma, because my driving along should have me stocked up with good. I really hate it trying to cut in and stuff like that, so I always let people go ahead of me. Unless they're those jerks that know there is a merge at the end of the road during a jam but they scoot into the other lane anyways just to try cut in the front because they are somehow much too important to wait, burns my butt every time. I always have to giggle when the truckers get on in there and govern the road by taking up half of each line to enforce a 'take turns, kids' policy!

I did this, but it didn't turn out the way I had planned in my head.:) I am recently divorced, and my kids and I had to move to the town where my ex-in-laws live so that my son can attend a school that has better programs for his special needs. My ex mother-in-law has been HORRIBLE to me, and what makes it worse is that the only apartment for rent in the tiny town happens to be IN HER WARD! Yuck! People in the ward had heard so many bad things about me and my kids from her that no one would talk to us. People even told their kids to stay away from my kids:( So I decided to take your challenge and kill her with kindness. I worked really hard at it even though it actually seemed to make her treat me worse, I didn't give up. In the end I figured it made me feel better because I was doing all I could to help the situation, and it was a good example to my kids. But you know what? A few people at church who had seen me throughout the week were nicer this Sunday, and my daughter made a friend in primary! Maybe seeing that my actions didn't match up with the stories they had heard about me made a little difference. It can't hurt anyway!
I know I've written a lot now, but I wanted to say that I am excited for this challenge too. I am going to college and have to commute an hour each way every day-sometimes twice. I live in the country, so there isn't loads of traffic, but with that much driving I can still appreciate a kind driver. I'm excited to consciously think about being one myself. Thanks for your challenges. Who knew you could make such a difference in all of our lives?:)

This will be a difficult one for me, as I rarely drive a car.
Hence my suggestion for a following Wake Up Wednesday: try to avoid using your car. Good for your nerves & the environment.
I go to work by train, followed by a 15 min walk. I could recommend it to anyone: I arrive much more relaxed at work. The train (or public transport) might be a bit slower than a car, but the time you spend on it is not wasted: you can read, write, knit, ...
I get my son from daycare using my bike, and a lot of our shopping is done by bike.
It takes a bit more organisation if you go by public transport or by bike, but I really think it is worth the effort!
(Btw: we do have a car, my husband uses it to get to work)

I just have to say that I caught myself saying "come on dude" yesterday to someone, and I know my 2 year old sponge is going to start repeating that soon.

This is such a good idea!! Thank you for giving us opportunities to be more Christlike and loving of others!

I used to be a bad driver but now I'm a nice driver! It did take me hearing my then 2 year old cuss out a car during a trip. Whoopies!

I wasn't able to do last weeks challenge, but we are going to be seeing my challenge person next week, so I will definitely do it then. Like I said before, it is going to be super tough, but I am absolutely going to do it.

Another tough challenge. Man. Two in a row! Driving on the east coast is difficult. The aggression and attitude out here is through the roof. I get really frustrated every time I drive. Hoo buddy. I promise to take this challenge, but it is not going to be easy!

Came across your blog - LOVING IT! I'm also here in Utah (not born and raised) and LDS, and married to my Mr. Right :) Thanks for sharing your blog - its very uplifting and fun!

I was really thankful for last weeks challenge. The second I read it I knew exactly whom I needed to do something for. My mother-in-law. We don't really see eye to eye on most things. I wrote her a little note and left it on her table with a fresh bouquet of flowers. It really meant a lot to her. It also helped me to start looking for the good and be a little more patient with the things that normally bug me so much. This has really helped our relationship! Thanks again!!!

THis one is definitely for me! Yikes.