Homemade Pants for a Rockstar

I love finding clothing for my boys that's a little funky.  I love stuff that has some rock 'n roll flavor to it.  However, it's too hard to find cool clothing like that without a giant price tag.  So, I made Rex these pants the other day. 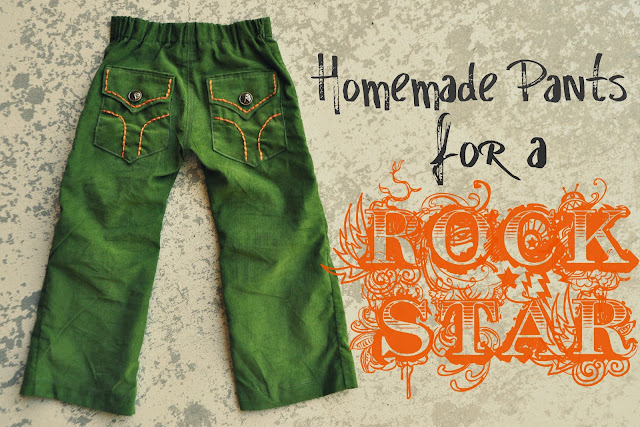 He likes them. I love them and I smile when I see his little bum in them. 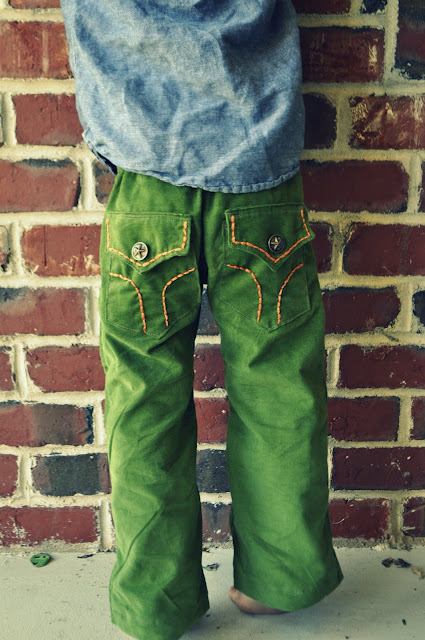 They are made of thin corduroy.  They are green because Rex adores anything that's green and if I was going to go through the effort of making them I wanted to know that he'd wear them.  Luckily, he's a big fan. 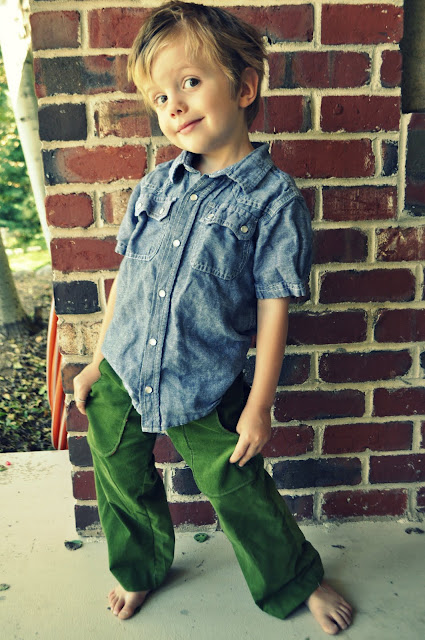 So here's how it went.  For the pants I used Dana's pants pattern and tutorial (with the flat front option).  If you need a different size than 2-3T you can always try tracing a currently-fitting pair of pants to make your own pattern.  I also used her pocket tutorial for the pockets in front.
For the back pockets I made my own little pattern on paper.  The paper was the exact size I wanted the pockets to be, so I cut two pieces a bit larger than the paper. 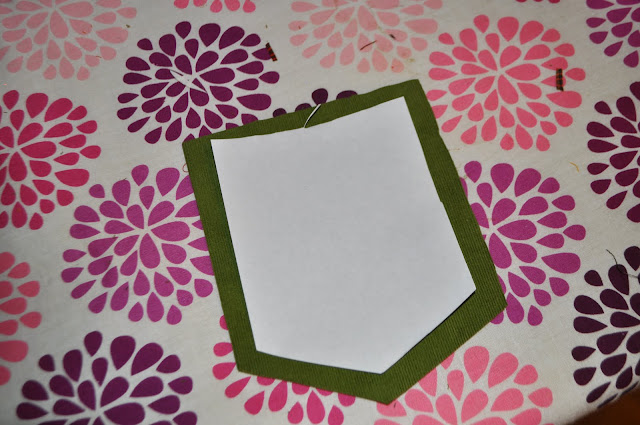 I pressed the edges inward and then topstitched around the entire pocket. 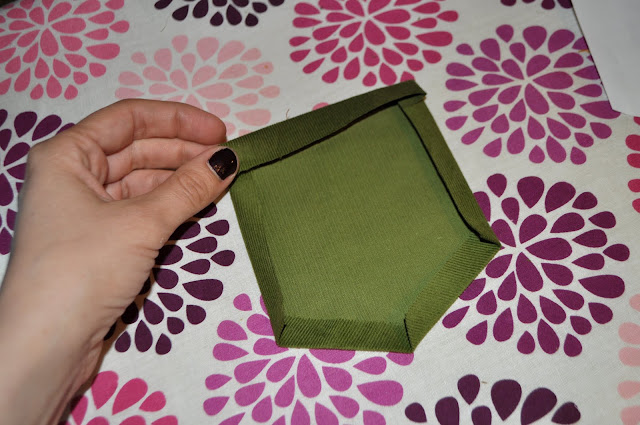 For the flaps I cut two pieces for each pocket.  (I wouldn't have been able to get the curve I wanted by folding the fabric under like I did on the main pocket.) 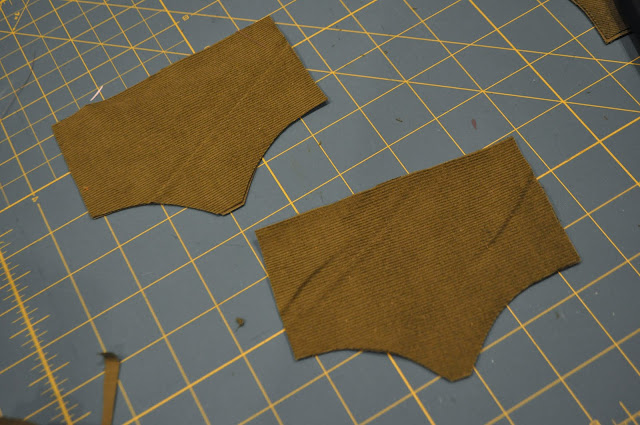 I put them right sides together and sewed them, leaving the top open.  I clipped the corners, inverted the flap, and folded the open area across the top in.  I pressed it and topstitched the whole flap. 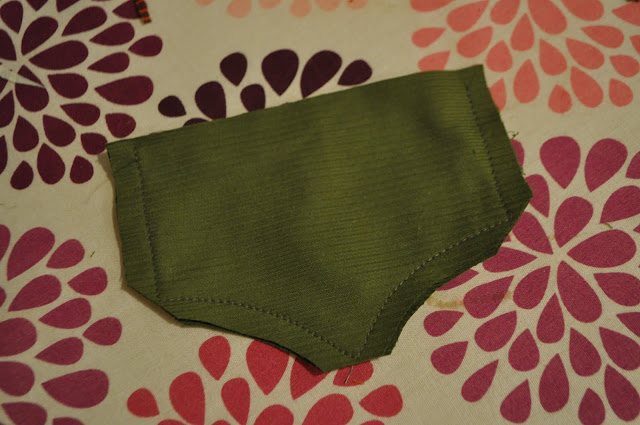 I used embroidery floss to embellish the pockets.  If you aren't familiar with how to embroider, you can see my short tutorial HERE.  It's not hard, but it does always take a little longer than I think it will.
Once the pockets were finished I pinned them in place.  (It would have been easier to sew them on before sewing the pants together, but I really wanted to make sure their placement was perfect since I hadn't tried these pockets before.) 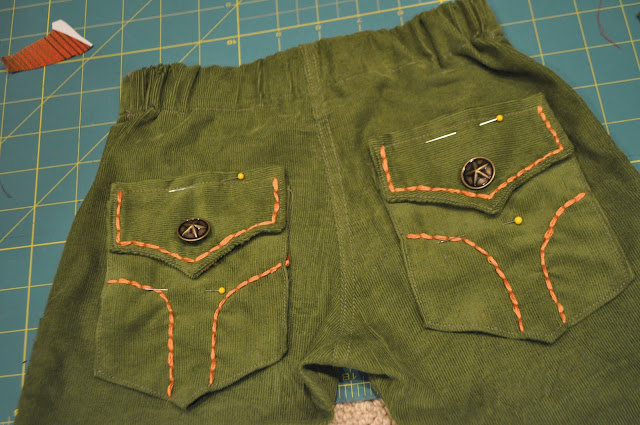 I stitched the pockets on (three sides of the bottom pocket and just across the top of the flap.)  Before stitching I sewed on the buttons.  My little guy isn't going to be using the back pockets, so I thought it would be easiest to have them buttoned closed.  (They could easily be made useable by making a buttonhole on the flap.) 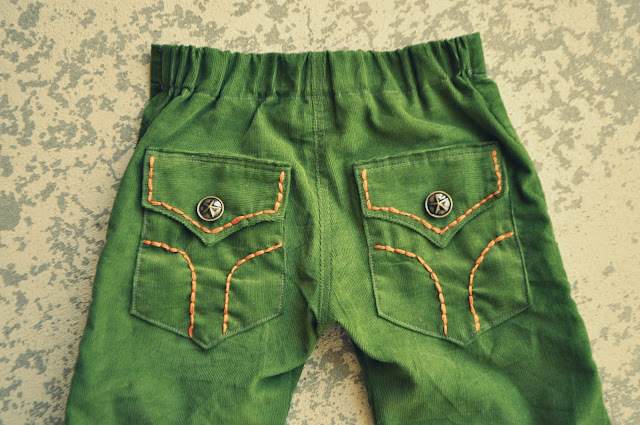 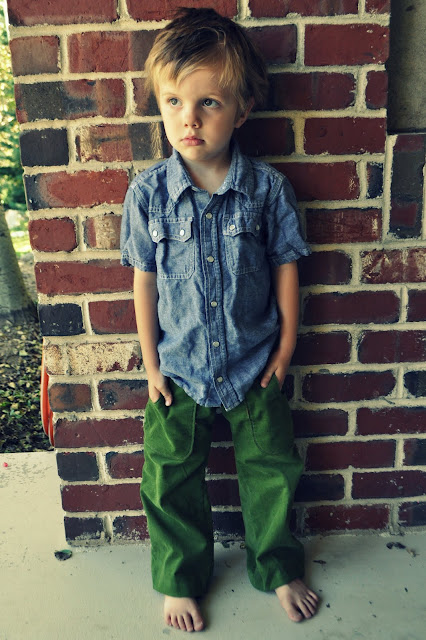 He's currently decided, however, that he has much better posing ideas than I do.  Here are some of his own. 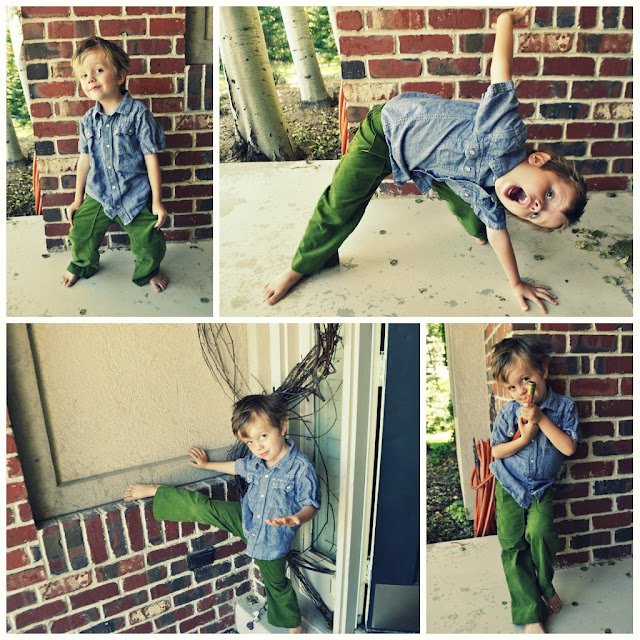 Yes, he IS indeed posing with the garden hose.  Let's just say he's creative :)
That's it for today.  Thank you so much for stopping by.
Linking to Tea Rose Home, Someday Crafts
Pin It
Email ThisBlogThis!Share to TwitterShare to FacebookShare to Pinterest
by iammommahearmeroar at 6:00 AM

They turned out amazingly!

At first glance, I thought it was going to be a tutorial about jazzing up a pair of pants you bought. Then I read the title with the photo and read the post. Homemade! Awesome!

Love the colour and style (I especially love the posing at the end!)

Wonder where he gets that creative side?! The pants are adorable - you did a great job on them!

The pants are adorable!! However, I moreso wanted to leave a comment of 'thanks' for those adorable pictures at te end of the post!!! They are so cute and innocent and a great reminder of how awesome kids are :)

These are amazing! I LOVE them. I totally want to make some for my little man - I was saying to my husband just last night that I'm pretty sure I'm going to have to make most of Sam's pants for the fall - he's kinda small. We got away with it in the summer because the shorts were just a bit shorter (yeah, my 14 month old cheerfully wears 3-6 month shorts). But to get the length in the pants I'd be in trouble.

So yes! Will be making many pairs of pants, and I appreciate this idea so much.

And you know, Rex's poses are hilarious but it actually is really helpful to me to see how easy it is for him to move and jump and bend in them! So thanks Rex! Awesome posing!

Those pics are awesome - I love his poses - hahaha
The pants turned out great too! You should sell these in your etsy shop - my 3yr old would look so cute in those!!!

those are soooo awesome! I might have to try my hand at them for my super silly guy!

Those pants are fantastic! I'm pinning them! And your little boy is so stinkin' cute! I love the J Crew pose. And it was fun to see his own poses too.

those are awesome!!!! great job! pinning as we speak!

Love the color, and I love the pose where he has his leg kicked up in a total karate move:)

Smiling big right now, don't know if it's your great idea and style or his poses, just perfectly adorable!!!! I think you need to change your blog name to that if you are gonna keep showing these boys with such great expressions! And I think you should be in a magazine or book or something for your creativity. Once again I wish my boys were young. Not sure I could get them to play along at their ages now! They did rock out lots of "jams" that I made, remember those? Great job!!!!

Such cute pants! LOVE the color! Rex is adorable!

He at least he will post for you! my kids refuse, cute pants!

First, those pants are freaking awesome. I think I could even get my nine year old to wear them. I might have to reconsider my thoughts that he is too old to sew for.
Second, love the poses. My kids are always getting creative with their poses. I usually have to take several shots with their ideas before they are open to normal poses.

Very cute! You're getting really good at pants! They look totally professional Cheri. Love the New Religion stitching on the back pockets. very cool.

He is absolutely darling! (the pants are too) Got a good laugh this morning as I drank my coffee. Thanks for your "boy" inspiration.

These look SO great Cheri!

Your amazing! Love this! I am trying to catch up with all that I have missed ; )

Love them! Funky yet cute and Rex is adorable modelling them!

Seriously laughed my head off at the hose picture. Soooo funny. I love the way little boys think

GREAT pants, and ZOMG, I nearly did a spit-take at the pose with the garden hose. So hilarious.

Great job on those! I need to make some! Did you used a twin needle on the top stitching for the crotch? They look so professional!

I'm not sure which I like more: the pants or Rex's modeling ideas! :) I've got to make my daughter a pair: we have trouble finding her pants that fit right!

Those pants are amazing! I have some gray corduroy sitting on a shelf at home. I think I just found my weekend project! Thanks :0)

LOVE the garden hose...I have a feeling we'll be seeing it next season. :)

Love them! The green corduroy is so cool. And I love his poses. What a fun kid. :)

Those turned out so adorbs!! Love the color & embellishment :) And I totally think J Crew will be calling soon for Rex & the garden hose...haha! What a cutie pie :)

Jcrew will surely be calling aftervthose moves. How could they not?

Oh man- makes me laugh! My four year old would be doing similar poses too! LOVE your pants- stinkin' cute!

The poses just crack me up. What a way to show off his awesome new pants.
-Stephanie

You have wayyy more patience than I do, I'll tell ya that much! This is awesome. :)

Oh well done! I just made a pair of pants from the same pattern from my little boy too. I love your little back pocket additions - so cute!

Love these! I just used the same tutorial to make a pair of wide striped pants for my baby boy. I love the addition of the back pockets. I'll definitely have to try that. Awesome!

I just have to thank you for creating such an awesome little dude and sharing him with us! I too have a little dirty blonde maniac who couldn't have a "normal" look on his face if he tried! I love me some silly boys!
Love the pants, def. one of my fave boy patterns!

Love the pants! And the color too.I bet my five year old would love a pair.
I linked you Alphabet Rocks tutorial to my blog today! jennishaytaylor.blospot.com
Have a great weekend!

wow Cheri! these are fantastic! I love the details you added oh and the modeling poses - totally rad!

Love these pants and that model!!! Hope he was paid well for his time :)

sooooo jealous of your creativity and your TIME! i think it would take me 6 months to accomplish a task like this. my son would LOVE these... guess i just need to practice and get gutsy!! thanks for sharing your creations, they are so inspiring!!!

Great Job! They look like you could by them off the rack for $50 (not that I would ever spend that much on childrens' clothes. Hmm... thinking about Ladies pants?)

Perfect timing! I have just begun sewing my little guy's fall stuff. It is starting to feel like fall up here in Canada. These pockets will definitely be on his jeans.

Kara @ Mine for the Making said...

Seriously the cutest boy pants ever! Not only that...but could your little rocker be ANY cuter??? Seriously these pictures are hilar!

I just started a new DIY fashion linky party on my blog. Id be honored if youd stop by and link these cute pants up to DIY Diva Thursdays :)

Have a great weekend!
Kara
www.mineforthemaking.com

I love the color, I would give my right arm for some green corduroy. (well maybe not, then I couldn't sew them haha!).

They came out awesome, and you've got quite a little model on your hands. :D

Adorable pants - and little boy. I think my little guy would love these in blue. Gotta go find me some corduroy. :)

i love these pants. i have made many pairs for my son. i love the back pockets too. what material did you use?

Adorable! First I need to finish my son's backpack for preschool then I'm going make him a pair of these fun pants!

I love this idea. I'll have to remember it next time I make some pants.

Loved the added pockets. A wonderful addition. I posted about these pants on my blog, and linked to yours. Hopefully thats ok!

These are rockstar awesome@! I featured these tonight!

I need these for my son!!! SO AWesome!

I'm hosting a party tomorrow & would love it if you'd come link up!!
http://formamas.blogspot.com/

I LOVE these pants!! Your son is amazingly cute in them, what a fun project!

Love the green corduroy and the stitch detailing, what a fantastic idea!I have plans to make a pair of Dana's pants in black corduroy so I think I might try adding some embroidery detail too to liven it up!

This is the first time I have visited your site, but oh my goodness, I have four boys and I just love these pants. Will have to make soon. I love, love love the stiching detail.
Thank you so much for sharing
Wendy