Valentines from a Rockstar

If by some chance you're arriving here to today because you saw me on Martha Stewart today, then WELCOME!!!  I hope you enjoy my blog and spend some time peeking around.  Today's project is for Valentine's day.

I wanted to come up with a new fun Valentine for my son Rex this year.  I had so much fun making last year's.  I wanted to include a photo again this time around.  Here's what I came up with. 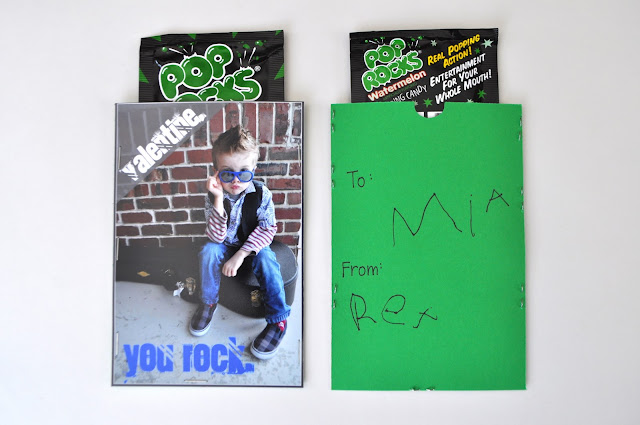 They were easy to make.  Here's the how to:


I dressed Rex us a little more funky than normal and took some pictures of him with my guitar case.  He happened to be a total ham that day, which was perfect.  I had a hard time deciding which picture to use.  Here are a couple others.  (I can't help but share them :) 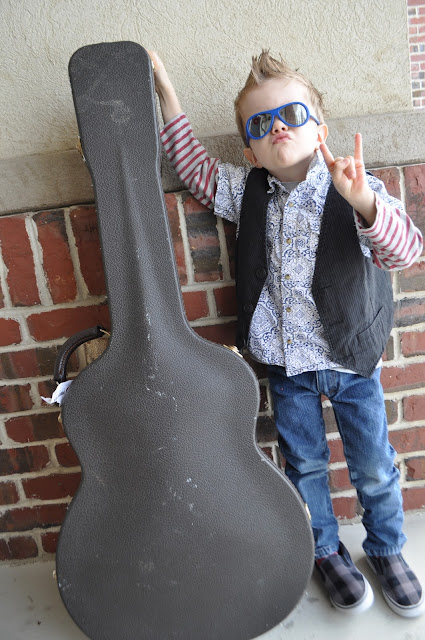 Oh yeah.  It's the smoulder. 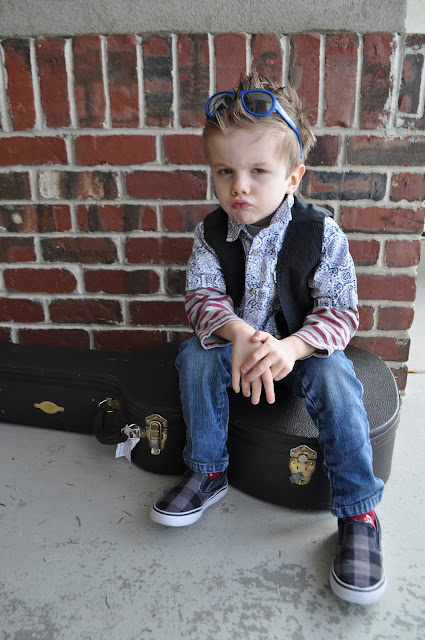 I added some text to the pictures on Picnik.  (Yes, I know.  It's going to be closing in a few months, but hopefully they'll carry the whole thing over to Google + and not just parts of it.)

I printed the pictures as 4x6s because that made them bigger than the pop rock packet. 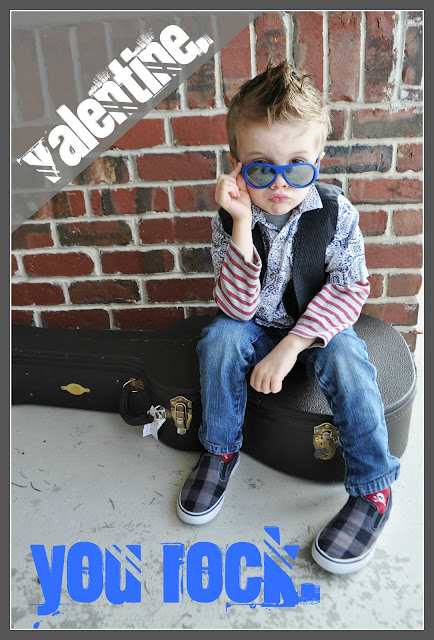 Then I cut a piece of paper to match the size of the picture.  I also cut a little half circle out at the top so it would be easier to slide out the candy.  I stapled 3 sides.  It forms a pocket for the pop rocks to slide into.  Then I let Rex practice writing his name and his friends' names on the back. 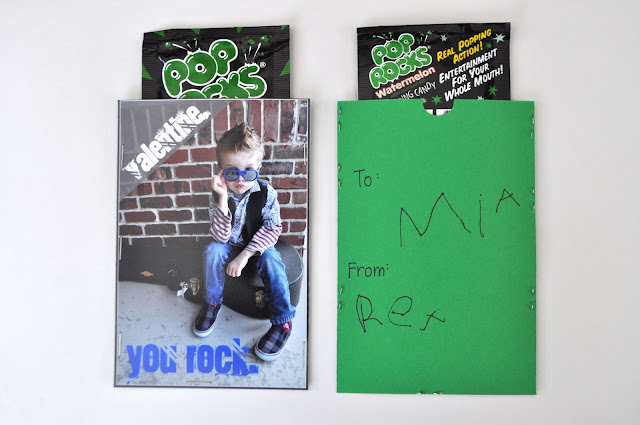 And that's it.  They kind of make me giggle. 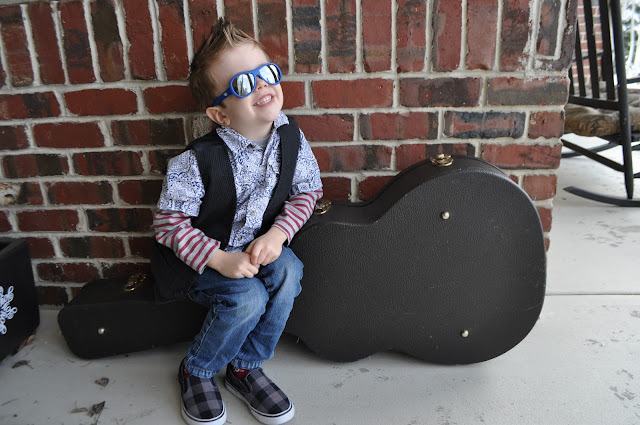 And we're ready for Valentine's Day.  I think he'll have fun giving them out to his buddies.

Thanks for reading.  See you tomorrow.

oh goodness his duck face rocks!! haha! I heart him!! love the idea!

The smoulder! That is beyond fantastic. I love all his expressions. Absolutely adorable.

These are too cute! I love the Rockstar theme. Also Congratulations on your opportunity to be on Martha! I've set the DVR to check your segment out. I've been following your blog for awhile and love everything you do. Especially your Wake Up Wednesday!

oh man, that's awesome! I love the pictures. It's great when children are hams when you need them to be! And when I found out that picnik was closing, I thought of you instantly! I hope they move everything over too.

Just saw the Martha show! You did great!

I saw this on Pinterest! Cant wiat til my little one is old enough for Valentines!

Ps. I gave you the Versatile Award! http://hgifford.blogspot.com/2012/01/ooooh-award.html

I love your blog. Lots of great ideas!

You got me into using picnik and now it's closing. Have you found a comparable program that allows you to easily make posters like you did? I use it to make invitations and that sticker feature is a must. I'm panicking about what to do when it closes. If you have found a substitute, let me know.
Thanks!
Melanie - melhoney@gmail

I love your valentine ideas! I've loved reading your blog for awhile now. I had no idea picnik was closing though, I'm a little sad!

I think these are so great! Thanks for sharing!

Ah these are just precious! You always have the best ideas for valentines day. I used the Kiss one last year..everyone loved it!
I dvr'd Martha today..you did amazing...i think Jessica Alba was more nervous than you. You're a natural! congrats!
I know you're a busy superstar now but if you get a minute could you tell me of another photo editing site..i discovered Picnik because of you and now they are closing. I have to admit im pretty bummed. Im just interested in what you plan to use next.

Those are hillarious! I think you need to do a whole rock star room now with those pics. Rugs is ready for you to update his pics. He says he looks really 5 in them-- so 3 years ago!

Cheri what font did you use on Picnik for those! lOVE THEM!!

Love this idea! Your boys are adorable! I was so excited to see you on Martha today! It was fun seeing you and not just reading!

I have been following you for a while and absolutely LOVE your blog. So I made sure to watch Martha today. I not only think of you as an awesome blogger,a mom of 2 cute boys, but a celebrity to boot now! How exciting to watch you on tv and feel like I know you :)

What an adorable ham! Love it. I'm trying to figure out how to watch Martha online right now! :)

The font is "olympiques" on picnik.

Where did you buy your pop rocks? I can't find them anywhere here!! (Henderson, NV)

I just saw the show and you did great! You seemed so comfortable in front of the cameras.

oh man, how i love it! you always have the best Valentine ideas!

You were great on Martha today!! I would have passed out! lol

I love this! It is SO cute! I +1'd it because I wanted to like, the way you can on facebook and that was the only other thing I could think to do. Such a great idea!

What a fantastic idea! This is going to be my weekend project :)

Watched you on Martha today--so fun! You were fabulous! This Valentine is pretty cute too.

I thought of you as soon as I read that Picnik is 'closing'. I will be at a loss if they disappear (but will certainly stalk them all over the web)!

Another great Valentine idea!! Thanks for sharing. And your Martha debut was awesome!

Another great Valentine idea!! Thanks for sharing. And your Martha debut was awesome!

What a cute idea! I also just wanted to say you were great on Martha today! Way to go!

SO CUTE Cheri ! And awesome job on Martha - you were so relaxed and calm, you're a natural. So when is your show coming out ? ;) GREAT job !

of course today when my son came home with His Valentines list I came straight to you!! We used your idea last year with Glows stick and it said you make my hear glow! Everyone loved it.
I'm totally going to share this with my son and hopefully we get a thumbs up!! And your little guy looks to cool!!

Your model is adorable.

I love this idea! thanks so much for sharing. I included your project in the round up of the best photo valentines from around the web this morning here: http://www.creativecarissa.com/2012/02/capture-love-withphoto-valentines.html