Picnik Substitute - you asked for it.

I've received a lot of emails over the past month asking about an alternative to Picnik.  (I think that's because you all know I'm addicted to it as well.)  We all know that Google is trying to push everyone to use Google+ where there's the "Creative Kit" that looks like a cheap, shortened version of Picnik.  I don't know if it'll end up being the full version when Picnik officially closes, but either way - I want a substitute rather than being toyed with.  Finding a new option is my way of sticking it to the man :)

So, I did some hunting for some good photo editing software and I'm happy to report that I now have a great substitute.  It's called Foto Flexer and I really like it.  Here's a screen shot of what it looks like. 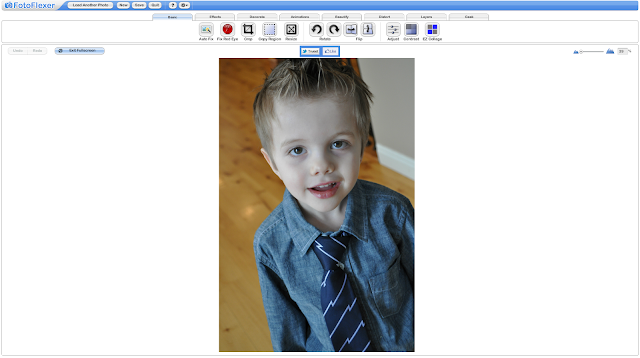 I thought it might be easiest to take you on a little video tour, to show you where everything is.  There are even a few things Foto Flexer has that picnik doesn't.  While there are less fonts and stickers, I don't think you'll be disappointed overall.  Take a look.

So here's the bullet point comparison, in my view. 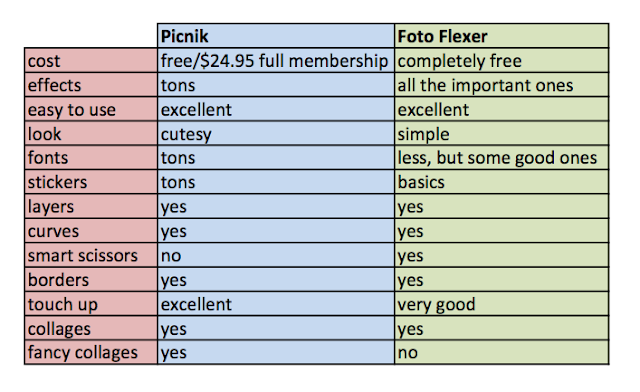 I'm excited to use it more and get totally comfortable with it.  There are also some cool features that I'm anxious to try out and learn.

So, goodbye Picnik.  We had some good times, but I've found someone else.....and it's getting serious.  So I'm dumping you before you can dump me.

Cheri, thank you SO MUCH for doing the research and tutorial for us! You rock! I'll definitely check this out!

thank you for posting this!! I too have been trying to find a Picnik substitute - I'll take a look at this one - thanks!!!!

I've been using Picasa as most of Picnik's features have been moved over there too.

OH BLESS YOU HONEY CHILD. This is amazing - thank you! I've been so sad about Picnik closing and this is just amazing. SO HAPPY to have an alternative!!!

Oh thank you thank you! I knew you'd find something! I have been using BeFunky that doesn't seem to be so bad. They have some different effects that picnik didn't have. I'll have to check out the one you suggested too. Take That Picnik and Google..lol!

You are awesome. You did all of the investigating for us and it looks like you found a fantastic program! I will be downloading it today. Thanks for all you do.

Recently, I've been using fotoflexer as my picnik alternative, but it's hard getting used to a new program! I'm having problems with a couple aspects of it....One being, when I'm done editing a photo, I save it to my computer, upload another photo and it's not the full photo. I's been cropped! The only thing that seems to be working for me is if I close out of the program completely and get back into it. Do you have any other ideas? Thanks, Jill

Thanks for the heads up & the tutorial!!!

Have you tried Picasa? I've used for years, and though it doesn't have stickers and the more cutesy stuff, I really like it for just plain editing...
it's also great for organizing photos and digital images! :o)

I felt the same way - thanks for finding a good alternative and helping me "stick it to the man" as well! :)

Not sure if I've commented before on your blog, but I've been a reader for a while now. I just think that your commentary is so funny! I enjoy your posts, what you have to say, your tutes, etc. Thanks again for all your work on your blog - me gusta!

I will have to give it a try, everything I know about picnik I know because of you. I hope you will give up a tutorial too! :) Gesh, all we do is want, want, want! Thanks!

Thanks so much! I really didn't want to switch to the whole google+ thing, so thanks for finding something else! My sister will be happy about this too.

Four Marrs and One Venus said...

Thank you for sharing! I am going to check that out and play around with it! Have a wonderful day!!

Love your video overview! Thank you for sharing this great find!

I am also very sad that picnik is closing.... but iI'll stick to it until the end :)

Same here. The only thing that bugs me is it's a Google product which are the people taking Picnik away from us. :/

I HAVE a Mac and it works just fine. Give it a shot.

Yes! Thank you for doing the research! I'm really excited.

i just found fotoflexer the other day and I think I'm just so annoyed that picnik is closing that I am refusing to try something new haha. I'll have no choice soon!

Thank you so much for finding a new photo editor for us to use, doing the research, and showing us how to use it! You rock!

Oh, and I would LOVE future tutorials on the extra stuff you mentioned!

Yay! thank you SOOOOO much!

I couldn't get it to work on my mac either. I got an error that said it was a windows based program.

Thank you so much for the information! I too, have been looking for a Picnik alternative (they are breaking my heart). Your opinion means a lot to me so I'll be switching over too! Thank you!

Thank you for doing all of the hard work for us. I love your blog!

Thanks sooo much for finding a replacement for Picnic.. Do you know if it has the eye bright feature??? Is there another way to do it??? Thanks for all your tips and looking forward to future tutorials.

thank you ! awesome find for us!

hurrah!!! i've been wondering what you'd find next! i kept checking to see if you would have anything to say on the subject of picnik's closing.

Ha, take that Google!! I love how you were prepared to do the hard yards on this. I got hooked on Picnik too but didn't sign up. I think they have dropped the collage too now they are packing up shop (I couldn't find it).

I think I used them once a while ago and stopped to use Picnik...Well, guess who I'm running back to. =D Thanks for doing the searching on this one!

Thanks, Cheri! You're awesome!

The Rooster and The Hen said...

Thank you! We had just found Picnik and were bummed that they were closing, so this is a great option! I love that it links up with Photobucket too!

You are amazing! Thank you so much for this. I was making my boys' Valentines today on Picnik and lamenting it's demise. I even told my kids they should decide now what they want for V-day cards next year, so I can hurry and make them now! They didn't understand my need for the rush, and now there is no need. YAY!

Thank you for this. I've been using Picnik since you blogged about it ages ago. I use it for my work and I wasn't sure what I was going to do without it, so I am pleased to see you've found something else I can try. Thanks again.

So happy to find you and your Foto Flexer find! This looks to be a good substitute for Picnik!
Thank you,
Tracy G.

Worked fine on my Mac.

I think this is going to be a great substitute for Picnik. Thanks for finding and sharing.

Hmmm...I haven't had those problems, so I'm not sure what to say. I'm glad it works if you close out and re-enter, but I don't know why it would do that. Have you tried to contact them to ask about it? Sorry I can't be more helpful!

Thanks for finding an alternative. I alternate being sad and angry about Google's decision to close down Picnik. I learned a lot from your tutorials and have developed a "look" for my photos that I can't seem to duplicate yet using any other editing site. Very frustrating. I've been dipping my toe into Pixlr editor (free), which is a lot like Photoshop, which means that it's not very intuitive (at least not for me). I haven't really found anything yet with the sheer amount of creative possibilities that Picnik offers so I think it might be time to bite the bullet and buy/learn how to use Photoshop. Once I own it, I know it's not going anywhere and I never have to go through this again.

Thanks for the info. I use the Picassa online albums, I loved they they linked directly to Picnik- I guess maybe they'll link to Google+ in the future? Either way, nice to have a good online alternative for when I don't have Photoshop handy! Thanks for doing the research and making a recommendation!

Thank you! I never figured out Picnik, so this (and hopefully future) tutorial is great!

Not only did you just make by day telling me about fotoflexer, but your wit just makes me smile :) Thank you for sharing!

You are fantastic! I've been sitting moping and whining about picnik closing, but I haven't done any replacement software research, and now I don't have to. Thank you!

Thanks for finding an alternative.

Dam I love picnik and wish it wasn't closing! I found this which has given me some hope that Picnik might live on: Picnik Alternative

Have you checked out PicMonkey.com?
Just launched today, but seems like a pretty close replacement for Picnik.
I'm excited!