Summer break is only a month away.  I've been trying to think of some ways I can add structure to the summer so we won't go crazy.  I wanted to create a visual display of the things my boys need to do each day.  I've seen a lot of great chore charts, but I also wanted a way to regulate their screen time (TV and iPhone, etc.).  Here's what I came up with. 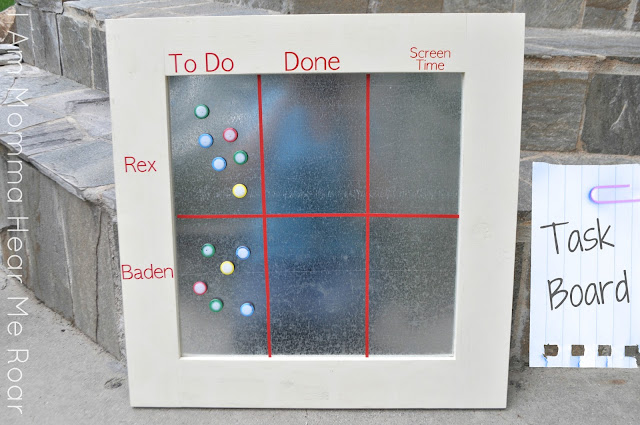 I got out some magnets I already had and some circular stickers I had as well.  They happened to be the same size.  Score. 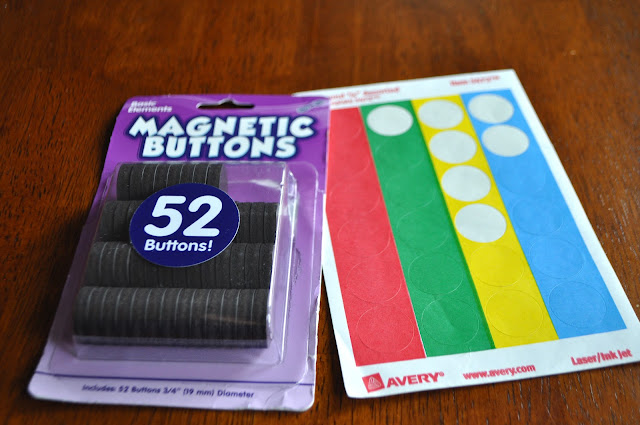 I applied the stickers to the magnets and then drew little pictures to symbolize different tasks they need to complete each day.  (i.e.  toothbrush for brushing teeth, toy for putting away toys, shirt for getting dressed.  And yes, that green one in front is indeed a potty.  My boys fight me on this every morning.) 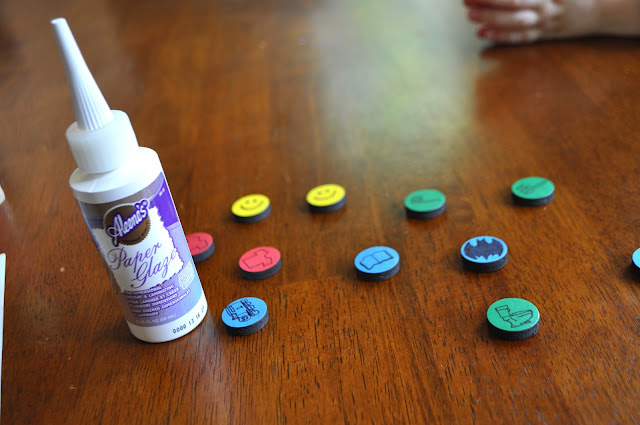 Then I applied a generous layer of Aleene's paper glaze.  I think this product is so cool.  I've been dying to try it out.  I creates a glass-looking layer over things.  My boys thought the "bubble magnets" were so cool. 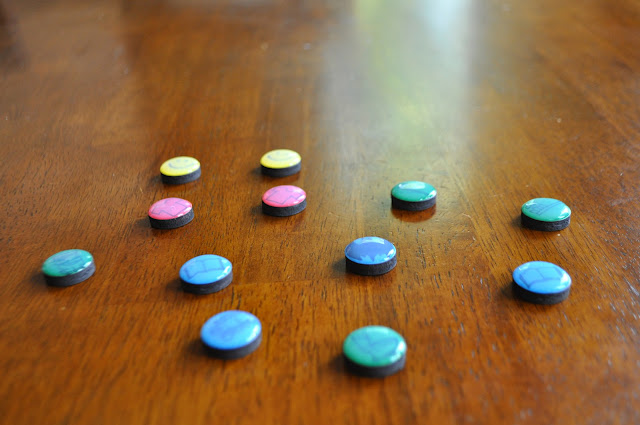 They look like this at first and then they turn kind of white.  When they are finally all dry they are clear.  That takes a long time, though.  I did mine early in the morning and they were still white that evening.  (Hence they are still white in the pictures, but I'll take a new picture and update it soon :) 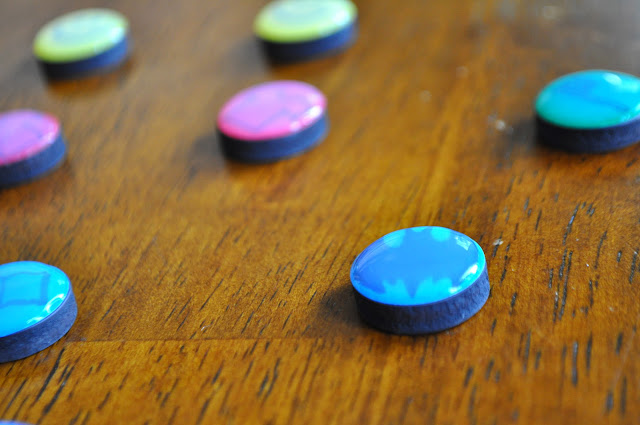 For the board I used a magnet board I already had.  (If you don't have one and don't know a store that sells them, you can buy a frame you like and then buy some sheet metal at a home improvement store.  Bring a magnet to be sure it'll hold the magnets.  Then cut it with tin snips and put it in the frame.)

I added vinyl, but you could easily use paper and glue the words on or write on it with a marker. 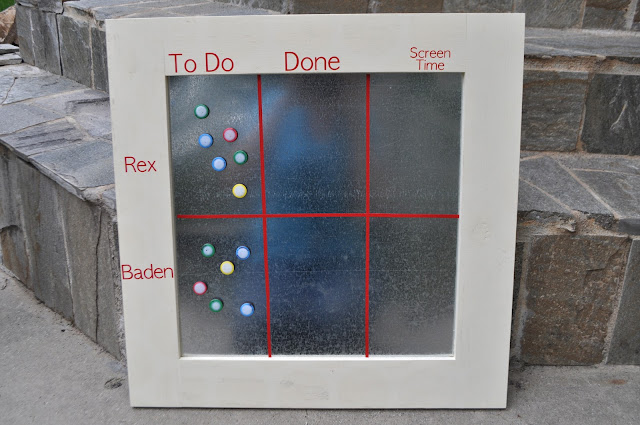 If you're interested in the details of the chart, here's how it goes. 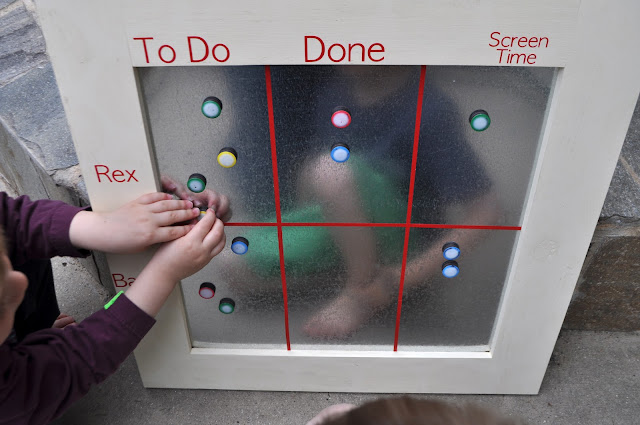 The boys are pretty excited about it.  I love finding ways to visually teach them principles.  Visual learning always helps me understand things better and I hope it will help them as well. 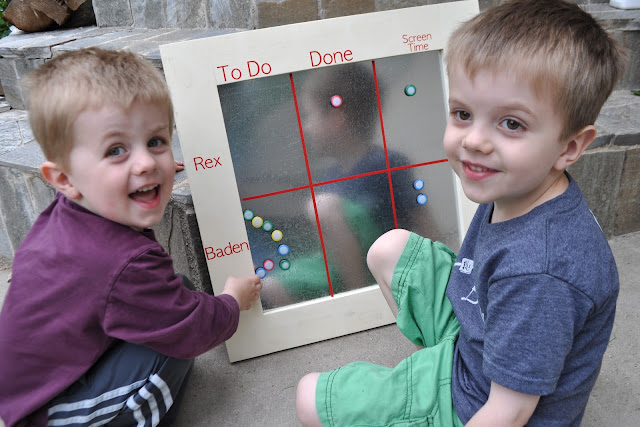 That is genius! I'm totally stealing this one. :)

What a great idea, I'll have to remember this one when my kiddos get a little older. Thanks for aharing!

Really great idea, especially with the screen time! But honestly, I am most. Thankful for the knowledge that I am not the only one with two little guys that just "don't have to go" in the morning!

you always have the best ideas! thanks for sharing. you are a great mom.

Clever idea. I a struggle with having structure during the school year - don't know where to begin with the summer! You're a smart mom to get it implemented early. Love the bubble magnets too.

Love this! I like that they earn screen time. Thanks for the idea!

I love this idea - I'm always looking for ways to manage my kids screen time. Actually, I should do something like this to manage MY computer time. Do the dishes = 10 minutes of internet, fold the laundry ...
My house would be much improved!

Thanks for sharing this idea. I've been trying to figure out how I wanted to do a chore chart for my girls and this will be ideal.

this is exactly what i wanted to do for my daughter! i even bought those same magnets! :) thankds

I'm doing this this afternoon! I have a magnatized COOKIE SHEET on hand to use. Thank you for the inspiration.

These are so clever Cheri! You have to market them for sure.

What a great idea! I actually have most of the supplies already and my kiddo certainly needs the structure this summer! Thanks for sharing!

I <3 LOVE <3 this and can't wait to make one for my little one! Thanks for the great idea!!! Would it be okay with you if I featured this post on my facebook page, StuckLikeGlueCrafts?

You are more than welcome to feature anything anytime. Thanks!