Thank you SO much for your kind feedback about sharing mommy school ideas.  I had no idea that so many of you liked these posts.  I think I'll share my favorite three ideas we've used during the week and post them on Fridays for the summer.  So, that being said, here are our three favorites from this week. 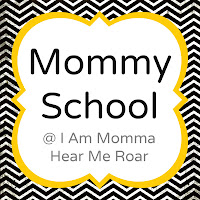 A few of you also asked me to mention the ages of my boys, so you could see which activities are good for which ages.  Rex is almost 5 now.  He'll go to kindergarten in the fall and Baden just turned 3.  He'll start preschool 2 days a week for just 2 hours in the fall.

1) Paintable Cardboard Dog Houses.  For our art day we dragged out two cardboard boxes.  I cut and taped them until they resembled a dog house.  Then I got out our washable paints and let the boys paint them. 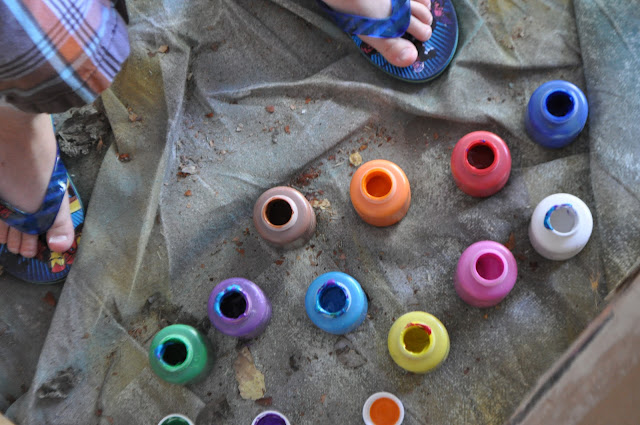 They both designed a dog house for their stuffed animals. 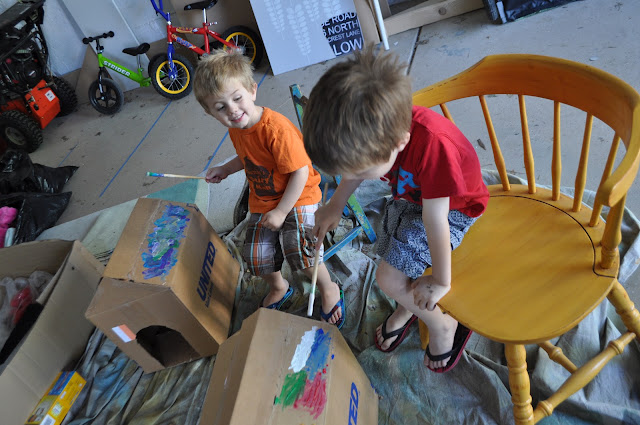 I was floored by how much they liked this activity.  Baden painted his three separate times during the day.  He just wanted to go out to the garage and paint some more. 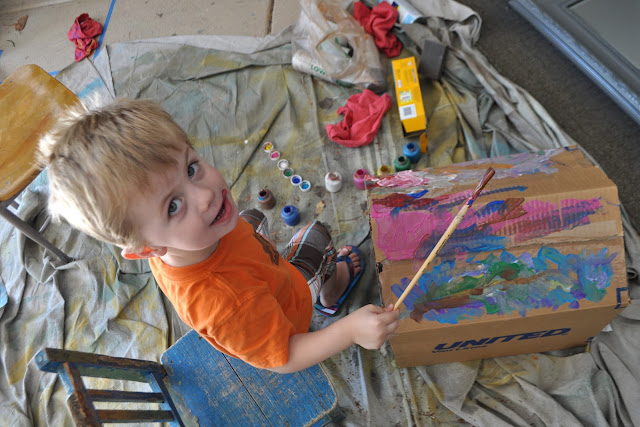 I had a drop cloth under them and the paint was washable, so I didn't have to worry about keeping things spotless.  This is the box the paint came in, if you're looking for some.  The project was cost-free since we had the boxes and the paint on hand. 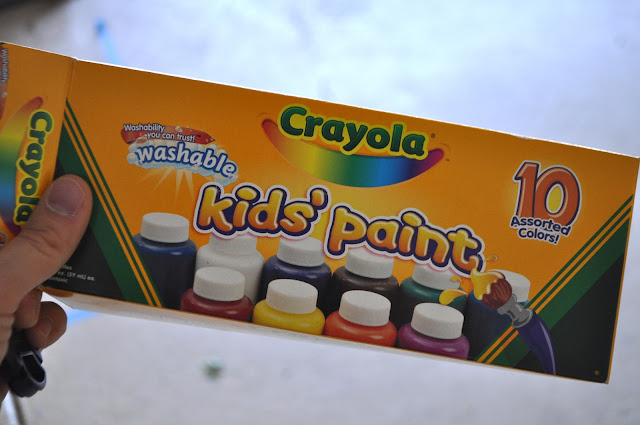 2) I'm calling this idea "My City."  (I adapted this idea from HERE, but changed things from delivering pizza to running basic errands.)  Before the boys woke up one day I put painter's tape on the ground to resemble streets. 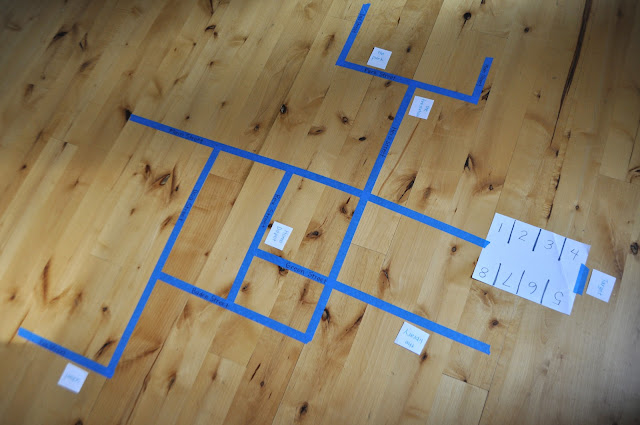 I labeled the streets with names that were easy enough for Rex to sound out.  I added buildings/places that we frequent.  I also added a parking lot with numbered stalls. 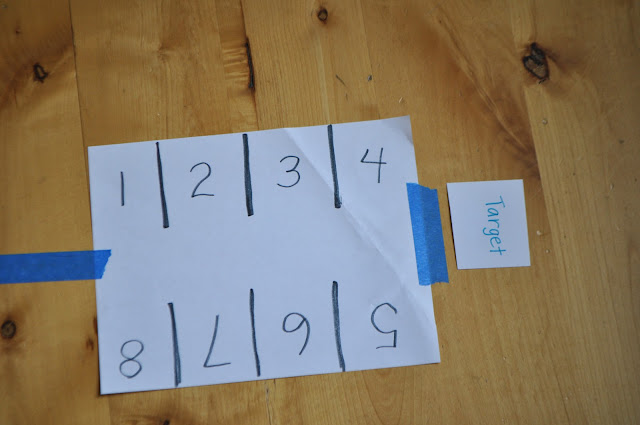 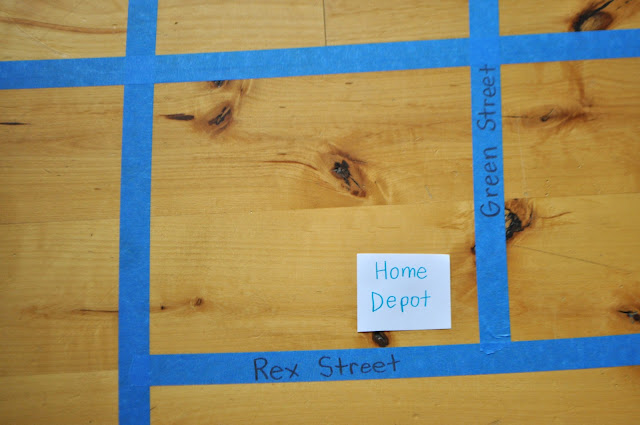 When the boys woke up I let them pick a car and "run some errands."  I helped Rex sound out the street names before we began.  Rex's lesson went something like this. 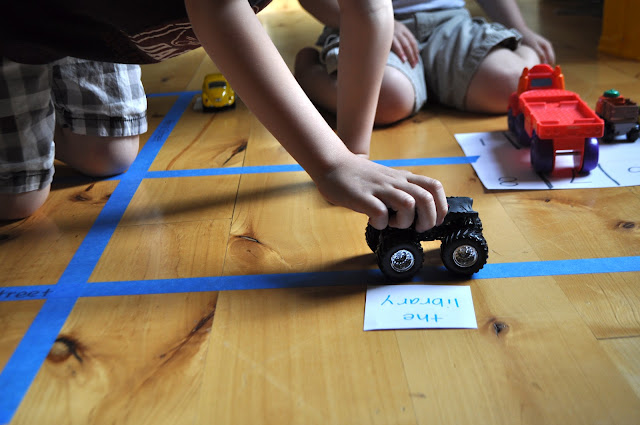 I kept things simpler for Baden.  I got out seven different colored cars and had him put them in specific parking spots.

"Drive the yellow car to parking spot 1.  Drive the purple car to slot 3."  You get the idea.  He's already great with colors and this reminded him of them and pushed him a little with some of the bigger numbers. 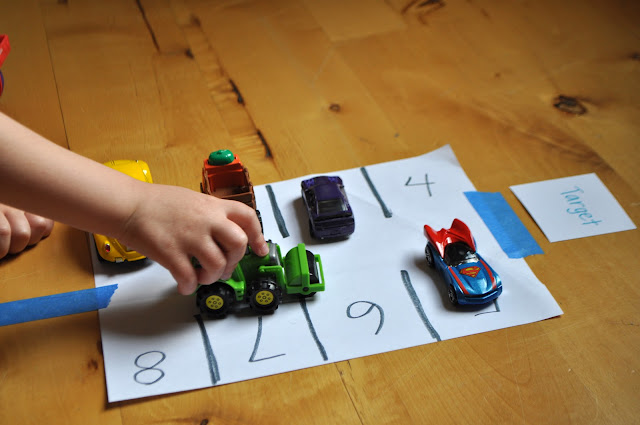 Then I did some more scenarios for Rex.  "Use the tow truck to pick up the purple car in the Target parking lot.  Tow it to the school." 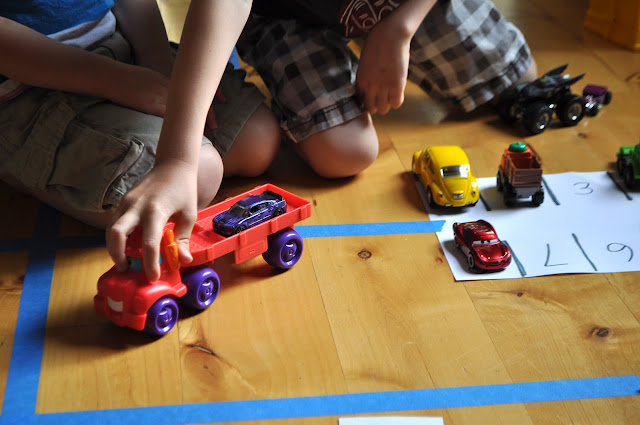 The boys liked this one as well.  I think there's a lot of teaching you could do with this set up.  In fact, I haven't ripped it off the floor yet. 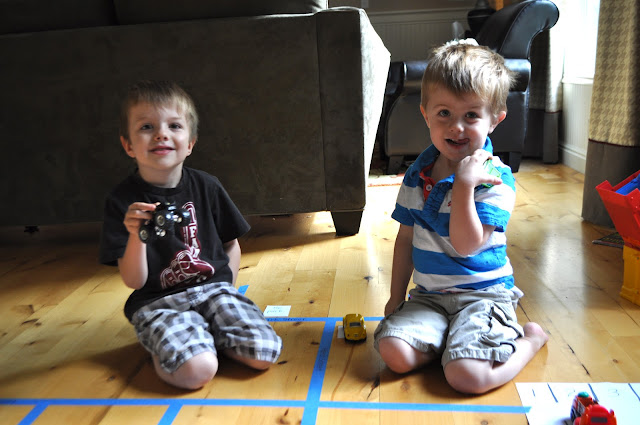 3) For our science day we made and decorated three types of paper airplanes/rockets.  I cut the papers the right sizes and let the boys color them.  Then we tested them to see which one could go further.


This straw plane I found HERE at All for the Boys.  It does fly a lot better than you'd think it would. 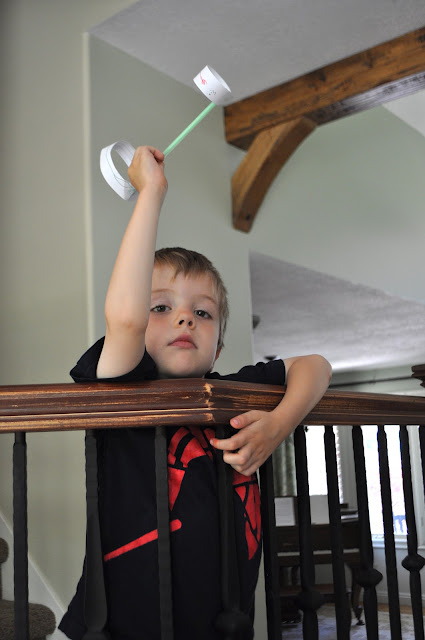 We tested a normal airplane as well.  (I love the look on their faces when they first let it go.  Joy.) 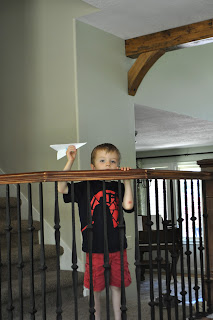 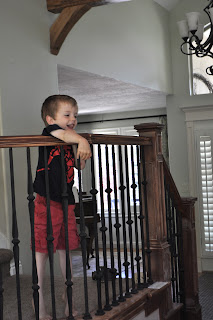 Then we did this paper rocket found HERE (via UCreate With Kids).  This one was the boys' favorite to play with.  (It's kind of the same concept as blowing your straw wrapper off like they want to at a restaurant, but there are not random strangers to catch it in the face when we're at home.  Whew.) 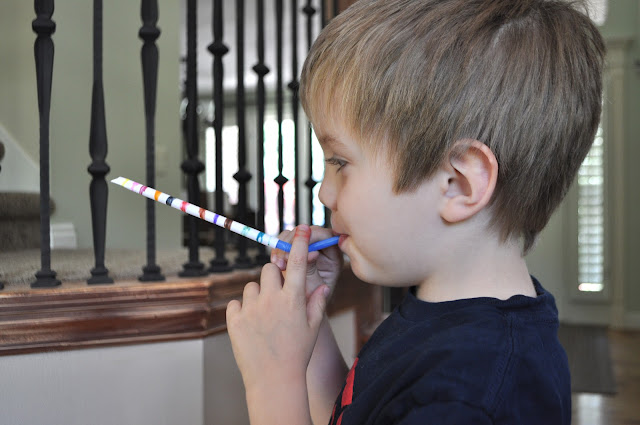 And that was the best of mommy school this week.  I'm really glad we've been doing it.  It's given us a little structure in the day and the boys actually look forward to it.  I do, too.

Great ideas! I have been working on the whole "left and right" thing with my son so this roadway idea would be perfect - fun + learning!!

This is awesome! You are doing soo great :)

We must make the streets for cars! Both my kids would LOVE it.

What wonderful ideas! I'm a nanny and I'm going to save these games for my munchkin. She'd love them. :)

I'm so glad you'll be posting about this weekly! Thank you! I'm definitely going to steal some of these ideas to try with my son this week. He's 4 1/2, but not as far along academically as your son is, we're still trying to cement all the letters into his head. Not quite ready for reading yet, but he will be in kindergarten in the fall. Thanks again!

I love this! Such fun ideas!

Oh wow, that painter's tape thing is a GREAT idea! I think I'll use that with my 6-year-old this summer. Someone gave me the idea of teaching him about maps and this would fit perfectly with that!

Love, love, love all the great ideas! I can't wait to try a couple with my six (almost 7) year old son this weekend. He'll especially love the dog house.

Wonderful ideas! I am definitely taking copious notes to do these activities when the Lord blesses me with children~

I love these ideas! Keep on being amazing!!

Thank you so much for those great ideas. I will try to keep those in mind. My son is only 8 months old, but time goes by so fast that I will need ideas soon enough. Thanks a lot.

Notice the tape runs up the stairs!

I love tape roads!! We left ours on for over a week and it wasn't so fun to take off of our wood floors though :P Keep on schoolin' momma!!
xo
Heather

Great ideas! My 5 year old was looking over my shoulder while I was reading this and was very enthusiastic about the painters tape roads, so I think we'll have to try that one today!

Those are fantastic ideas! I love all three ideas.

What fun ideas! I think I want to try them ALL! I was wondering how my little guy lined up with your boys, so thanks for sharing their ages!

There are tons of great ideas on here.
http://www.shabbybeachnest.com/101-idea-im-bored-jar/

I love these ideas!

My husband is a professional painter, so I know that painter's tape can lift the finish off of hard wood flooring (especially if it is old!) I HIGHLY recommend testing the tape on a small, hidden area before getting to work on your road system.

There is also an ultra sensitive type of tape for flooring made by 3M that shouldn't cause as much damage. Still, I would test it first!

Cheri, I need to be more like you. I love your fun and educational ideas. If my boys had their way they would watch TV all day. yuck. I've been needing some fresh ideas to help them learn while they play and these ideas are great. I just got some big boxes this week and I'm thinking they are just the right size for dog houses!

Great ideas! My son would love to paint his own dog house :) Thank you!

When I hear abot teaching little ones, I think about excruciating poors sitting by their desks) Thats why I was against early home teaching. But you showed me how funny can it be! It seems that they are just playing! You are a super-momma!
Aljonushka from faraway Belarus