So after the two month debate, Rex finally settled on Loki for Halloween.  He and I agreed that it would be fun if he and Baden were Loki and Thor, since they are brothers.  So, Baden will sport THIS Thor costume from last year and here is Rex in all his villain glory. 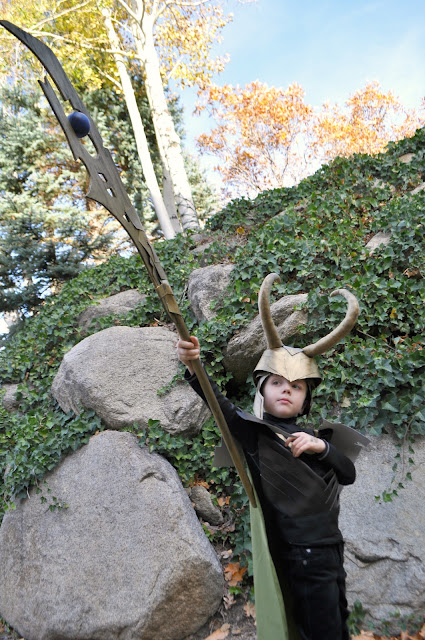 Are you scared?  Not yet?  Just think of the creepy movie line, "You were meant to be ruled!" 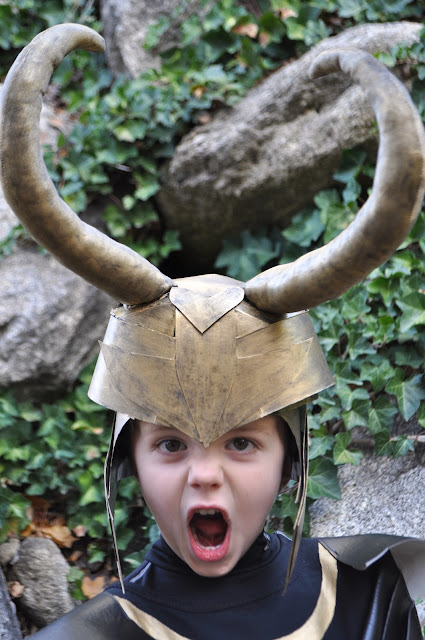 While I won't be doing a full tutorial, I'll give you a run through of what we did.
We used this Thor shot as our clothing inspiration, but obviously we didn't do the whole massive coat. 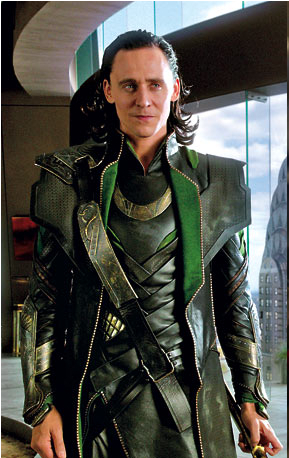 The scepter was made by my dad.  It's a wooden dowel at the bottom and that lightweight balsa-type wood at the top.  Where the dowel and wood meet there are a few layers of cardboard to bridge the gap and add decoration.  My parents happened to have a blue ball lying around the house just like Loki's scepter in the movie.  Random, I know :) 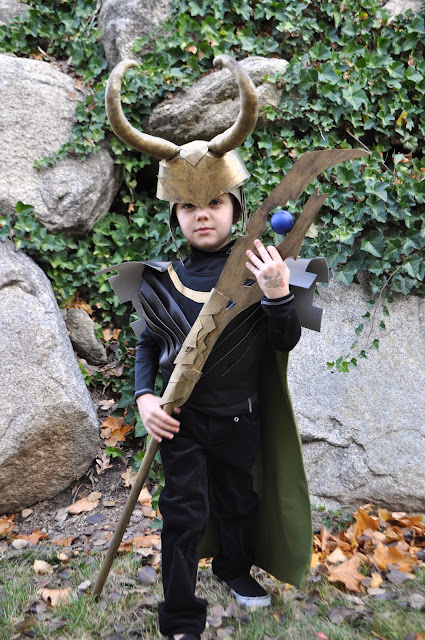 I painted the scepter black first and then dry-brushed gold over the top.  I think that's the best way to have things look metal. 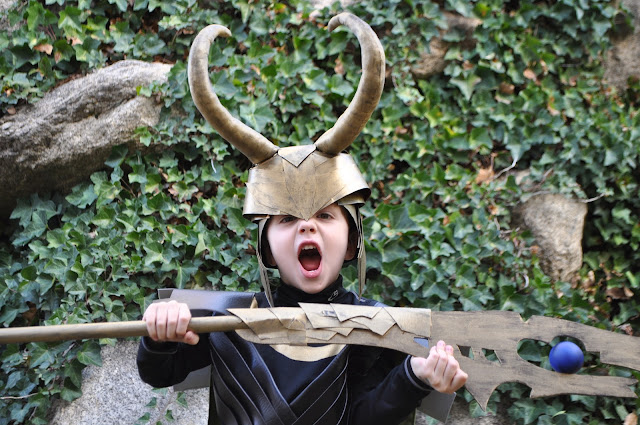 I made the helmet from cereal boxes.  Really. 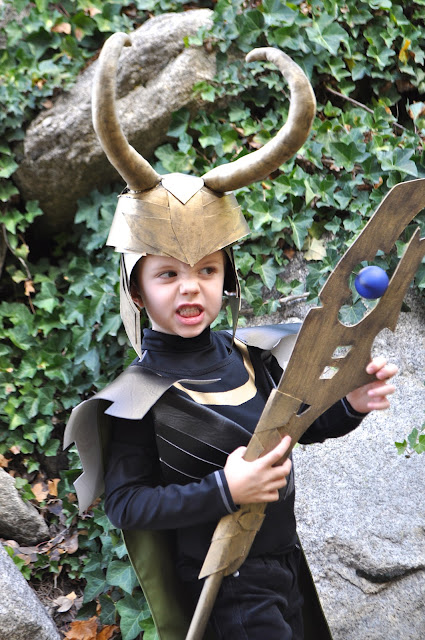 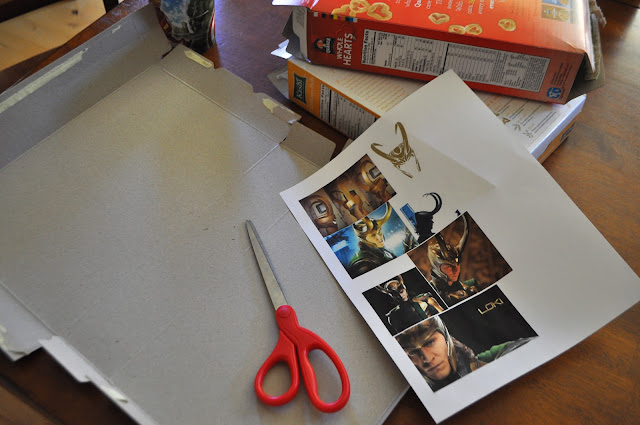 I started with a band around Rex's head, making it fairly tight and then I just added layer after layer.  It's kind of one of things you can't write a tutorial for.  I just kept going until it looked right. 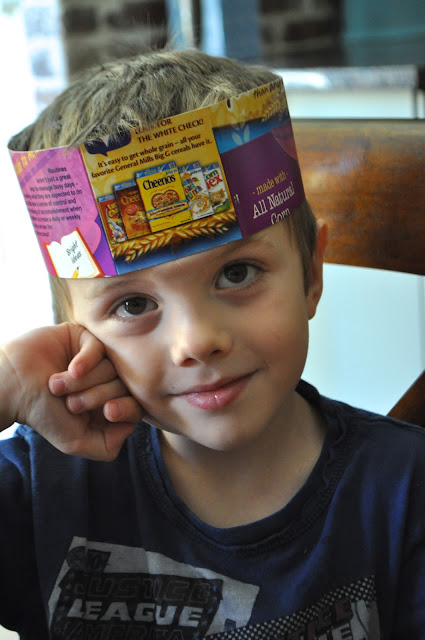 I tried a few things for the horns that didn't work and then my mom suggested sewing them.  She sewed and stuffed the horns out of satin.  Then I hot glued them on and secured the top of them with more cardboard, also concealing the ends of them. 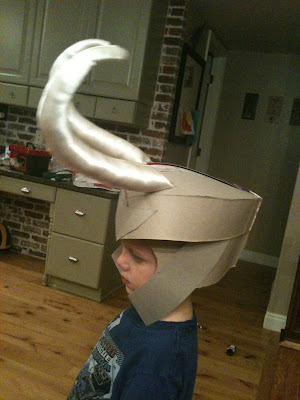 The helmet got the same paint job - black first and then dry brushed with gold.  I even painted the satin horns the same way. 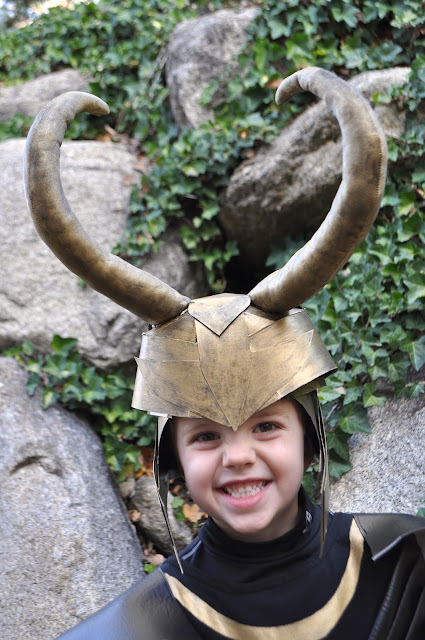 The cape is my mom's pattern from her etsy shop, but with black vinyl sewn on over the front.  At first I thought about doing cardboard armor, but then I figured if we used my mom's pattern he could use the costume in his dress up bin.  He plays superhero dress up a LOT. 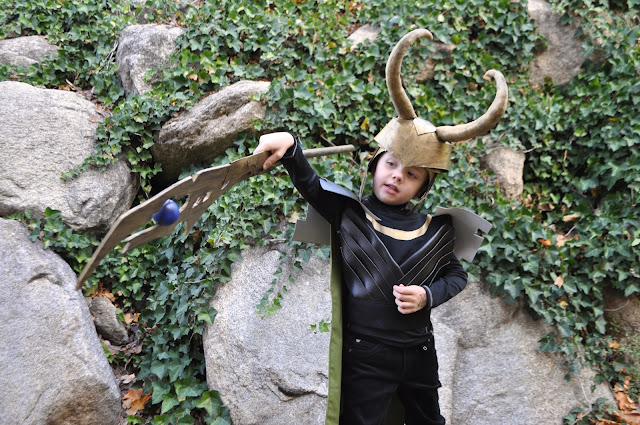 My mom made the cape and added the vinyl to the shoulders as well, for dramatic effect.  The gold line around the neckline is just fabric paint.  Then I just made sure he wore all black underneath - shirts pants, and shoes. 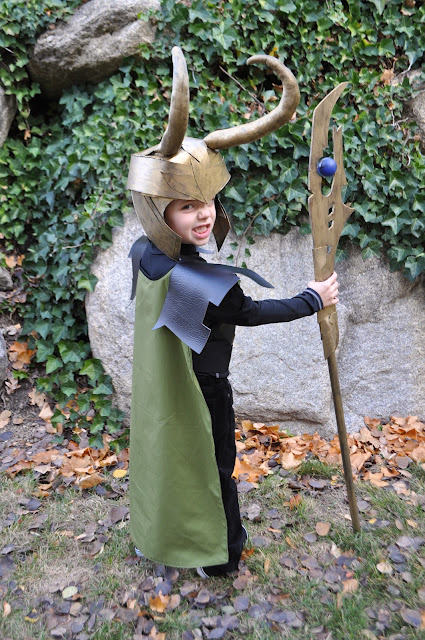 And as you can see, he doesn't have a lot of problems getting "into character."  We can hardly wait to hit the streets trick or treating. 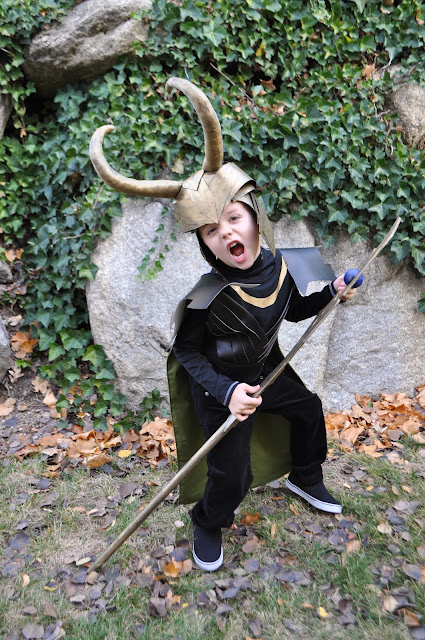 And Halloween costumes are ready.  Whew!

Thanks for the help, mom and dad.  And thank you all for reading.

- Funniest costume I've seen yet this year HERE.
Pin It
Email ThisBlogThis!Share to TwitterShare to FacebookShare to Pinterest
by iammommahearmeroar at 6:00 AM

How fun to see Old Norse mythology being a trend - though growing up in Norway, hearing about these mythical figures, I really never pictured them like this! Tor and Loke (Norw spelling) to me are like the old vikings - big, strong, rough and tough!

Your son looks so GOOD!

I am in awe that you made that helmet out of cereal boxes!

Awesome! The headpiece is fantastic. We have a little Thor and a Captain America this year. I'm loving the superhero phase! :)

Could this be any more awesome?! So cool!!

That is amazing!! Love it!

Funny. I made a pterodactyl head in almost the same way for my six year-old this year. He won most creative costume at his school festival this weekend.

Amazing is really the only word for it.

So awesome! My boys are going to be Hawkeye and the Hulk for Halloween. And yes, I made both their costumes!

This is incredible. From here, the cardboard and satin actually look like metal. How is that possible??

That is the BEST costume EVER! My kids and I will be jealous for years to come. Way to go team!

I LOVE Halloween:). I just finished up a purple princess dress and a dinosaur(or dragon if you ask my daughter) for her little brother. Can't wait to take pics!

Love how it turned out. And love the 'in the works,' shots of the cereal box finished but not yet painted. It made me giggle to think it's cereal boxes. :) It looks awesome finished! Thanks for sharing!

OMG you're awesome! I love it! I just hope I'm as good at making costumes for my kiddo when the time comes. Great job!

holy cow, you are a genius! what an amazing costume - can't believe you made the hat out of cereal boxes. amazing.

He has the coolest mom, dad, grandpa and grandma ever! And you prove necessity is the mother of invention.

That is amazing! What a great homemade costume!

I'm wordless (don't know if there such a word in english))) The helmet and horns are fantastic!!! I couldn't even imagine that the helmet was made from boxs!!!! Your parents and you are a really great team!!!!
Aljonushka from faraway Belarus

So awesome!!! i am just in awe of the helmet! great job!!! it really looks like metal too!

Those are awesome Cheri! My husband and I went to a Halloween party dressed as Flo and Mayhem! We were a hit. You should check out the picture on my facebook page.

I love that you used cereal boxes! It really makes this costume 500x cooler. Him and Thor will look awesome trick or treating!

My son would have died to have this costume. He is going to be the Dark Knight Batman but told me yesterday I want to be Loki. Sure you do sweets but we are doing Batman this year. LOL Love this.

I love the staff. Very impressive

How cool! I love that the costume making was a family affair.

Wow! such Talent. My kids also went through a superhero phase, but they never got into the actual characters. How do your kids know all these characters? do they watch the shows or movies?

Very awesome. We managed to make our 3-year-old daughter a Thor costume (per her request) but were unable to figure out a suitable Loki for the 18 month old. So the baby just gets to be a fairy princess.

Ahhhhhhhh! I love Loki. And I love cardboard. And dowels. You've combined all my favorite things in one place. It is beyond awesome! And did I mention I love Loki?