Refashionista Day 7 - with No Big Dill

Today we have Katy from No Big Dill as our guest, which makes us very, very lucky.  Katy floors me pretty much every time I click onto her blog.  Her sewing skills and her inherent artistic ability make her blog so fun to follow.  To add to that, her photos are incredible and so are her subjects - 5 daughters and 1 son.  I've said it before and I'll say it again.  I would LOVE to see Katy on Project Runway.  Welcome Katy!

I love when an article of clothing has a story.  Refashions are more apt to have a story than something made from a cut of fabric off a bolt.  This one starts a few months ago.  I got a call from Ryan's brother.  I never get a call from him.  Ever.  Ryan's dad had somewhat unexpectedly passed away and I needed to let Ryan and the children know.  They were all heartbroken.  We immediately made plans to fly in for the funeral.  While we were there, we put the kids to bed and gathered as adults in Papa Thom's room, going through his boxes of collected items, drawers of miscellany, and closet of clothes.  I sat back and watched as his boys reminisced about old cards they made and how shocked they were that he saved them.  They laughed at the styles of clothes, and wondered about some never seen before treasures uncovered.  It was beautiful to witness.  He was a smaller man than all three of his sons, so many of the clothes were put in the giveaway pile.  As this sweater was pulled out, I asked if I could have it.  I wasn't sure what I was going to do with it, but somehow, it needed to come home with us.  I loved the heaviness and quality, I knew something else was in store for it. 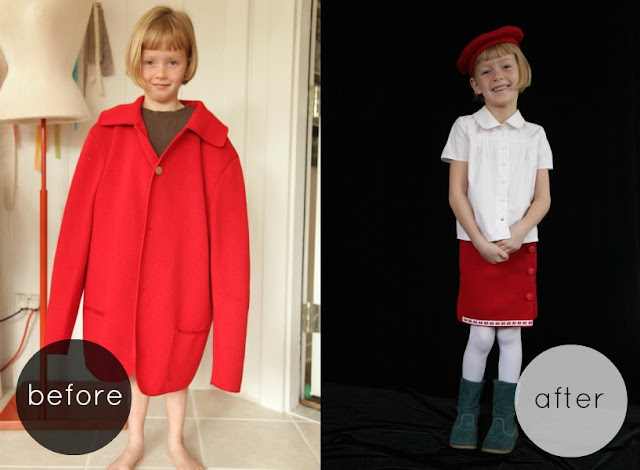 We got home and as I was unpacking, I pulled it out and wondered what in the world I was thinking, to bring it home.  I didn't have any plans for it, but, I wasn't ready to part with it quite yet, so I put it in with my fabric.  I always have a hard time refashioning articles of clothing because I feel so restricted with what I can do, but it's a good exercise in being creative, and I was so please with how this came out, even if it was different than what I had planned. 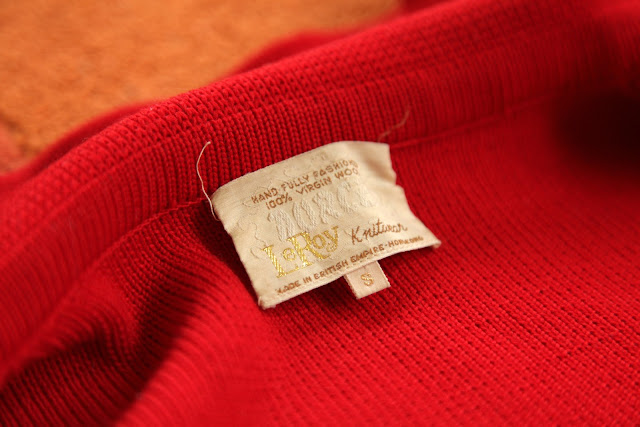 Originally I wanted to make a pleated skirt, but as I sat and played with the sweater, I realized it was much too thick, and decided on a skirt with tiny tucks in the back and a button down panel in the front. Since I wasn't using as much of the sweater as I would have with the pleated skirt, I had enough left over for a hat, a beret!  I also decided to use the wrong side of the sweater since it wasn't as worn and it had a daintier look than the outside. 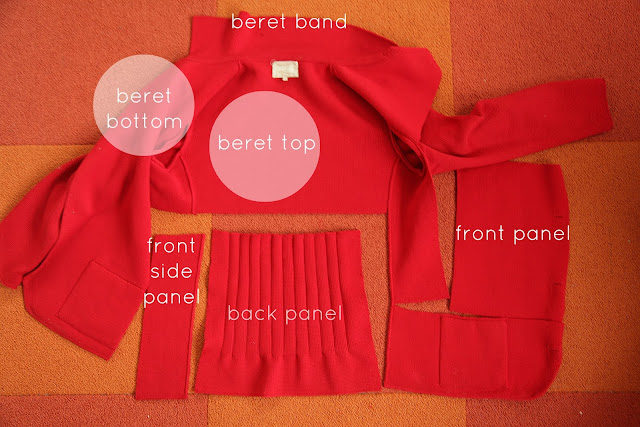 For the tucks, I counted every 7 rows of knit and folded it in half, and stitched an eighth of an inch until four inches above the hemline. 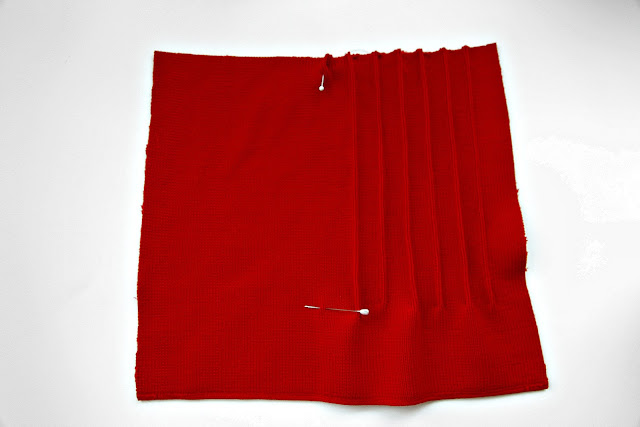 Since I used the original hem for the back, I didn't need to do anything else to it, but I couldn't finagle how to use a finished edge for the front hem.  Sewing with a knit piece is tricky because it wants to stretch, so I basted the raw edge to keep it from making a lettuce edge.  I still needed to finish the edge, but didn't have enough to fold it under (plus it was too thick), so I decided to add a ribbon, but needed the edge encased.  I added some white bias tape.  Then changed my mind and did some red over it so there would be a bit of red showing on both sides of the ribbon.  It's all about flexibility and creativity with a refashion! 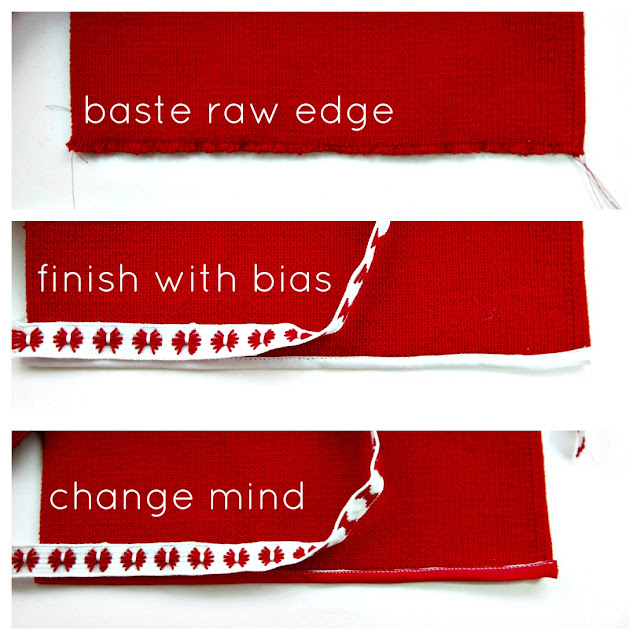 I sewed the panels together and added an elastic to the waist.  I stretched the elastic as I sewed it on the back to gather it a bit and folded it under to finish the edge. 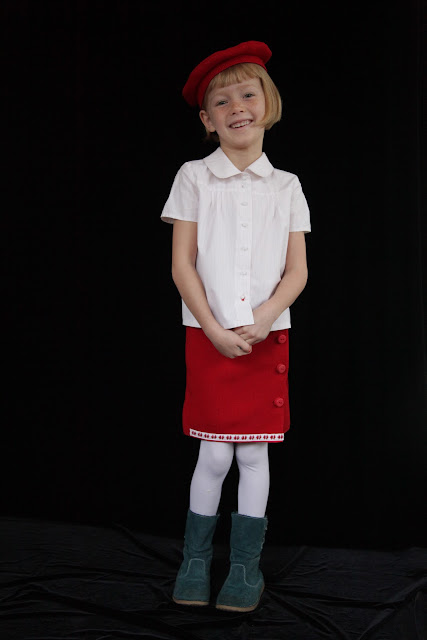 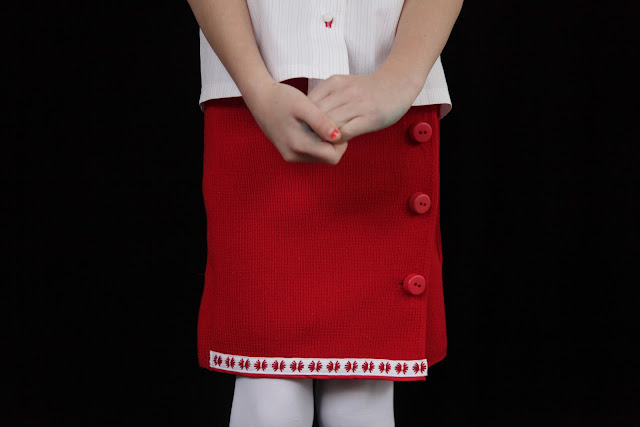 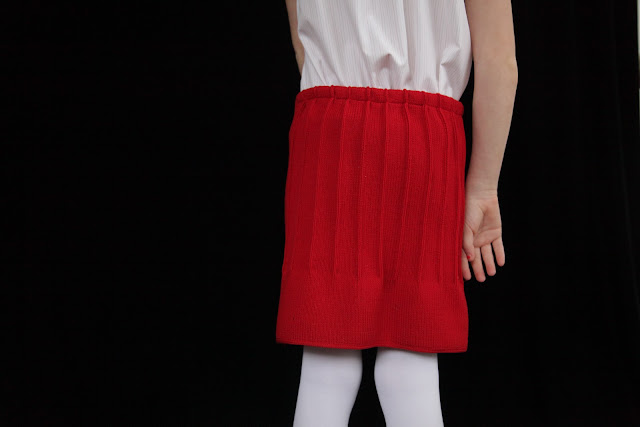 The hat is just a solid circle on top, a hollow circle on the bottom with a band sewn around the opening.  Using the collar gave it a nice finished edge with a fun detail in the back.  I added a small sting of beads on top. 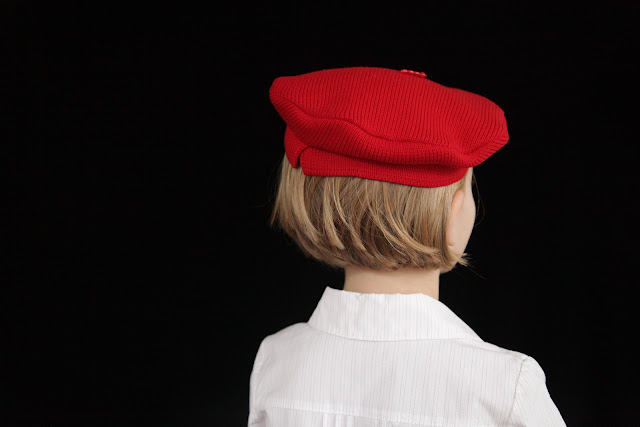 All I had left of the sweater were the sleeves.  They've been requested by the resident ballerina as leg warmers. 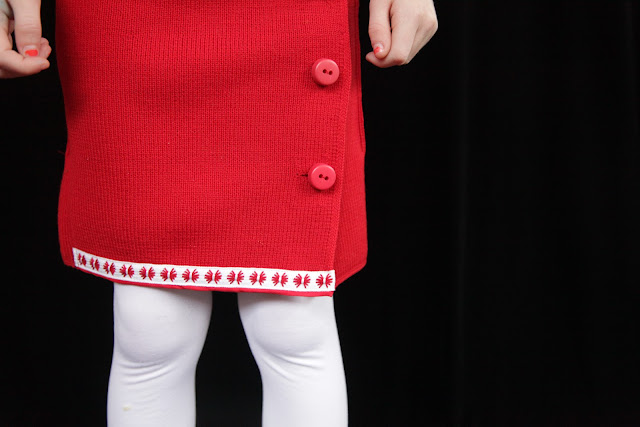 Now Azure has one more special memory of her grandpa. 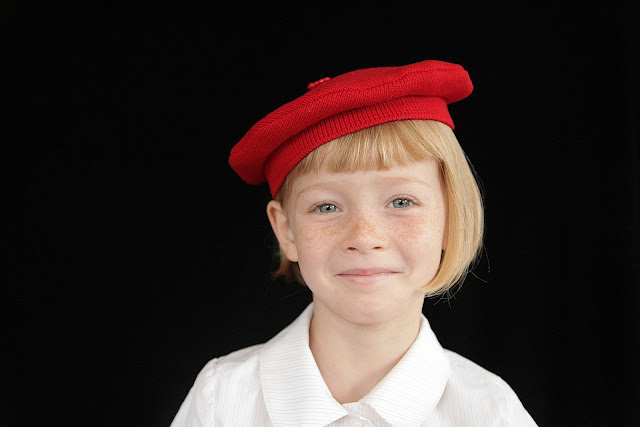 Thank you, Cheri, for inviting me to play!


Thank you so much, Katy!  If you haven't visited No Big Dill I recommend heading over HERE to browse through her tutorial page.  You will fall in love and pin like you've never pinned :)

I love the skirt-- and the story behind it! How wonderful to have this sweater enjoyed again.

I love that story. The skirt and hat turned out great! I have to admit, I had to re-read and look at the pictures about three times to figure out what you did to the hem of the front of the skirt. Wow, my brain is fried! :) It turned out really cute, and I love that ribbon on the front.

That is so cute and your little girl is an adorable model. I love the hat on her too. Thanks for sharing!

I'm sure her Grandpa loves the skirt as much as Azure does!

I love this! It's fantastic!

oh gosh, what a fantastic story to have with this adorable outfit. Lucky girl.

Incredible! And how meaningful that it was her grandfather's sweater! What a waste it would have been if it had ended up on a dusty Goodwill rack.

That's incredible. I love that it has such a touching story behind it.

Love the story and the outfit. That Azure is such a beauty.

Lynette--sorry I fried your brain!

Thank you, everyone, for your kind words, and thank you Cheri, for such a fun series!