So you may notice that I didn't post the last two days.  We actually went on a little family trip.  You see we had this golden little window - baby still inside me, no napping kids, no diapers, etc - so we took it. I'm really glad we did.  We made some great memories and I have no idea when we'll really be able to do another family trip.


So here's the recap if you want to hear about it.  I really wanted to take the boys to Legoland, since I've heard that this is a great age for it.  They've never been to Disney and had nothing to compare it to.

I searched on the internet a lot before buying tickets and finally found San Diego Go Passes on Costco's web site.  (I can't find them there any more though.  Maybe they'll come back?)  The passes gave us entry into a billion different places for 3 days only.  That's exactly how long we were going to stay and it had all the places we wanted to go so it was perfect and it saved us a lot of dough.

We also wanted to hit these locations during a not-so-busy time of year.  The weather was chilly as times, but I would take that over long lines any day.  Legoland was awesome.  If my kids were much older I probably wouldn't have thought so, but they were at the perfect age for it.  The rides were pretty mellow, so even I could ride most of them pregnant.  (Don't worry.  They were extremely mellow.)  We had no lines and a sunny day.  It couldn't have been better. 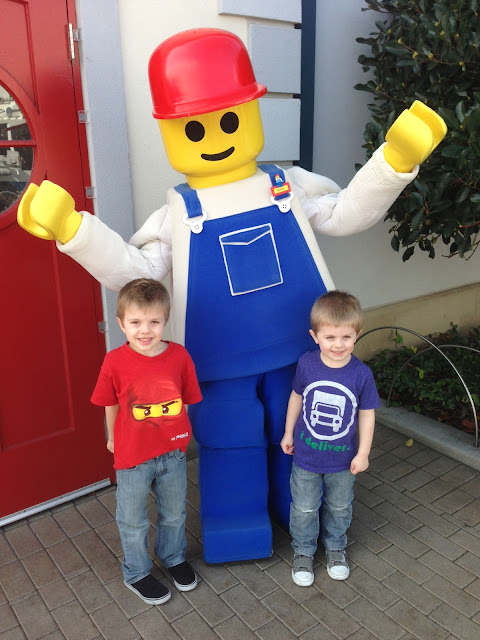 Legoland was super clean and the employees were really nice.  I'm glad we only planned to spend one day there, though.  We had plenty of time to ride pretty much everything. 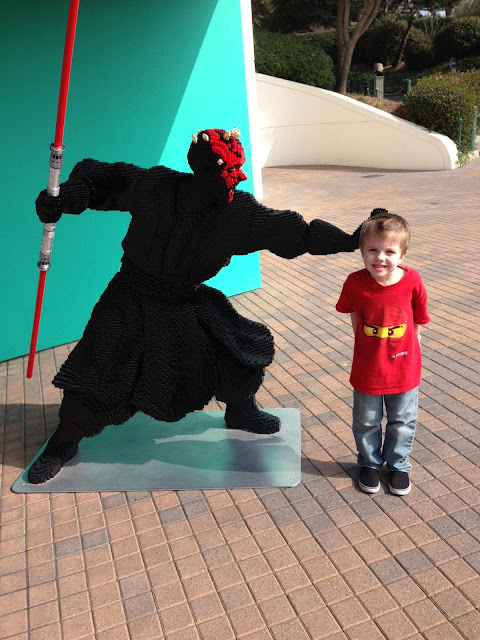 The next day we hit the San Diego Zoo.  Now I see why people rave about it.  That place was incredible.  Rex was really excited to see a panda, after he'd learned about them in school. 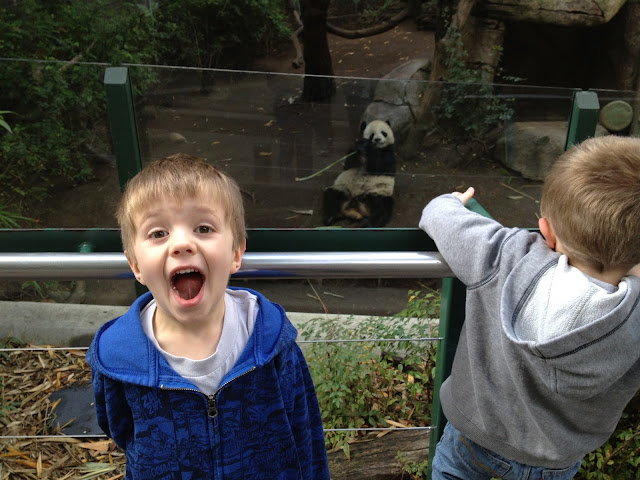 There's a sky tram, moving platforms, tons of animals (obviously), bus tours, and the grounds are absolutely gorgeous.  (We didn't get to the safari park since we didn't have enough days to do it, but I've heard that's pretty cool too.)  We thought the zoo itself would be more exciting to our boys.  We had some really cold, rainy weather that day so we had to retire a little early. 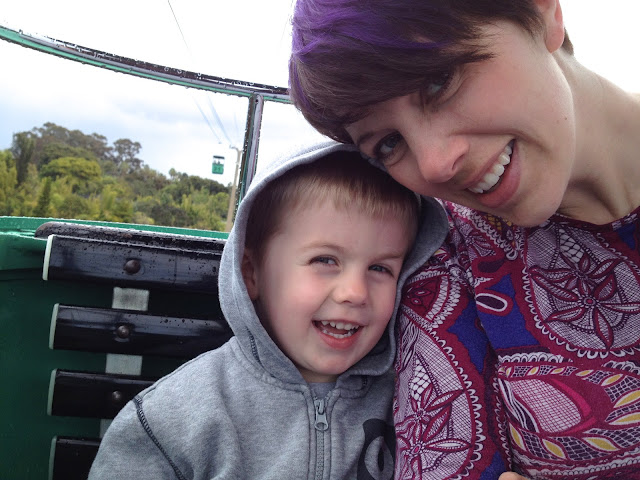 Later in the day when the rain stopped we saw Balboa Park and walked along the beach.  The boys had never been to a beach before and we thought Rex needed to see it.  Why?  Because the other day he told me he's never getting married and he's going to live on the beach.  Now he's at least seen one :) 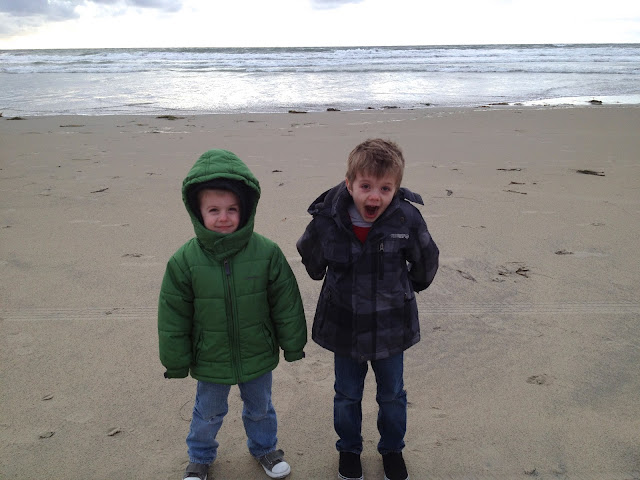 The last day we hit SeaWorld.  I preferred Legoland overall, but there were some amazing things at SeaWorld as well.  I loved the whale show and at the end of the day we actually got to touch the dolphins.  The dolphins are in this pool at the front and sometimes they come up to the surface and you can pet them.  We had come to the pool a few times that day without any luck, but right before we left we each got our chance.  We were way too into it to snap a picture.  It was awesome.

And that's out trip in a nutshell.  It was worth the 11 our drive each way.  We ranked this trip as 10 times better than the little cruise we did last year.  We're learning :)

That's really cool, glad you guys had a great weekend getaway. My son (5) has been begging to go to Legoland, but the closest one to us is in Florida and we live on Long Island, so it'd require a plane trip. I must say that it's funny to me that this was the first time they've been to a beach, but I guess that's because we live 2 mins from the closest beach. Thanks for sharing.

My son was four when we went to the San Diego Zoo and loved it. I loved it too, did not get to spend enough time there though. As for Lego Land, I have a seven year old boy and we are about 40 minutes from the one in Florida. He LOVES it. Will choose that anytime over Disney World.

We have been planning the same trip for this June. I'm due in August and my son is 3 so we wanted to hit up those same places. Glad to hear it was good for your boys. Do you mind telling us where you stayed? I've been looking at hotels vs vacation rentals and trying to decide. I'd love a small kitchenette so we could make some of our meals instead of eating out all the time. Just wondering what you did about that. Thanks!

How funny, we just spent 4 days in Disneyland last week. This is the only time of year we go, decent weather and not long lines! This was the first time I've taken my kids (2 and 3) and was pleasantly surprised how much they could actually do and how much fun they had. Even after 4 jam packed days we could have used one more... Glad you had fun, looks like the perfect getaway!

It took me several days but finally I could go your website! Yes, I found on Pinterest and since I did not stop there, they are a beautiful family, you're a great mother, and you have some beautiful children, I admire the crafts you do, but on all things, I appreciate how you educate your children (values, entreteniminetos, care of the planet, etc.)
What else to say? God will continue to bless
A hug from Argentina Marisa
PS: To read your site translated with a translator your post, haha

I took my two youngest to Legoland last year and we had a blast! It was such a great park and they were the perfect ages to enjoy it. The first day we got to San Diego we went to the zoo, and while we had polar opposite weather (90's in late October), our kids weren't super impressed. It was so expensive!!! And mid day, the kids wanted to leave and hit the pool. I couldn't blame them. Sounds like you guys had a great time. It's the perfect family trip!

What a great idea! I love Rex's panda face, it's classic!! His beach face is pretty cool too.

We live just across the border in Tijuana but visit the SD Zoo all the time. It's great! Glad you enjoyed your stay in SD.

Wow! Never been to a beach before? My goodness.

We have had SD Zoo passes since our first son was born, and it is one of our favorite places to visit! We were actually at the Wild Animal Park on Sunday, and even though it was quite cold, it was worth it :) So glad you guys got to have such an amazing trip with the boys. TFS!

We stayed at the West Inn and Suites while in Carlsbad (by Legoland). That place was awesome. I picked it because the reviews for it online were outstanding. The service was great and the rooms were big and clean. It's best to book it through their site instead of Expedia because when you work through a 3rd party like Expedia they often get the room-type request wrong. Expedia listed us for a tiny room with one bed even though I booked something different. The hotel changed it easily for us, but if they had been booked that night that change might not have been possible.

Once we headed to SanDiego we stayed at Residence Inn Mission Valley. It had pretty good reviews and they always have the kitchenette there. It was nice. Both places had a big breakfast buffet in the morning, which is great for cutting costs as well.

Good luck with your trip! I hope it's awesome!

How fun! I am graduating from college this spring, and my kids and I are planning of going to San Diego for a "graduation celebration vacation." We got a city pass as well, and are planning on going to the zoo, balboa park, and sea world as well as a few other places. We are also staying in a beach house and spending some time with the kids' birth family who lives nearby! I can hardly wait. I have a question about the zoo though. I know you said you left because of the rain, but do you think if it had been good weather you would have stayed all day? Is there enough to do there, would your kids have gotten bored? I'm trying to plan out our schedule, and I want to know how much time to give to the zoo. The only zoo I've ever been to is the Hoagle zoo which we have never spent more than a few hours at. I realize that San Diego is massive in comparison, but I just wondered what you think.

Good for you Katie! Congrats! You guys will have a blast I'm sure!

I think that if the weather had been nice we could have easily stayed there the whole day. It's big and there's so many animals to see. We missed seeing a lot of them that we wanted to. Plus, you can walk around for a while and then do the bus tour when you get tired. That's at least a 1/2 hour I think. There's the tram too. If you want to squeeze more into your day you could probably see it all in 2/3 a day, but I think your kids would be fine there the whole day.

how about orange said...

I was just looking at your lego land photos and my 7 year old little boy, Jude, wanders over and says, 'I think I know those boys Mum!" I had to explain that would be pretty impressive as they lived in America and he lives in South East Asia. He decided they would still be friends though! So Hope your boys are up for an imaginary online friendship with a very energetic British boy! Hope you r keeping well.
Clarex