Before we get started today I wanted to say thank you SO, SO much for all your input on our car decision.  You guys are so stinkin' helpful and I appreciate you taking the time to share your insights.  Okay, on to today's tutorial.

When I saw these knit shorts at Mini Boden, I had a few thoughts.

1) I love how comfy they look.  I normally don't like elastic tops, but with a t-shirt out it really doesn't matter because no one sees it.
2) Who the heck pays $28 for little boy shorts?
3) If I made some of these for Baden this summer I wouldn't have to worry about buttoning his pants for him after he goes potty.
4) I could use some old shirts to make these.


Yes, all that went through my head rather quickly.  So, I whipped out an old shirt of my husband's and went to work.  I don't consider myself to be a fast sewer, but this actually is a fast project.  I promise. 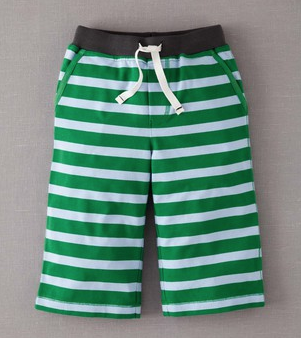 
While I would have loved to have had time to show you these shorts on Baden wearing a sweet outfit, running on the beach like the Mini Boden catalog, I was short on time and a beach.  He was actually excited about them and whipped off his pants to try them on.  So instead, here's my mismatched little ninja.  We probably won't be wearing these shorts with pulled up socks nor a striped tee....hopefully. 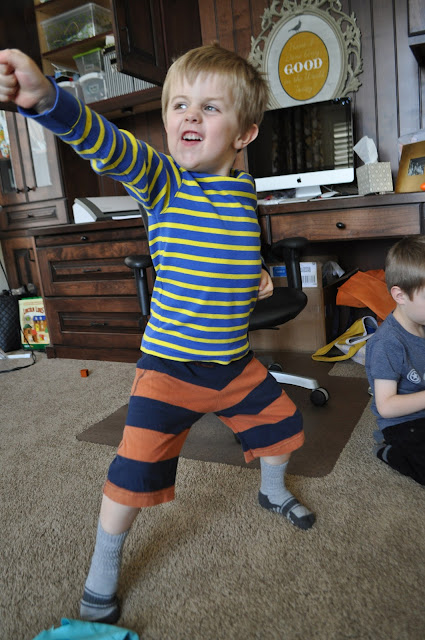 So as I mentioned, I started with an old shirt of my husband's. 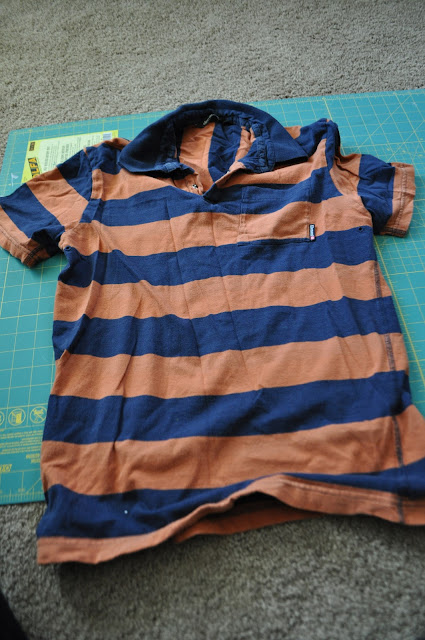 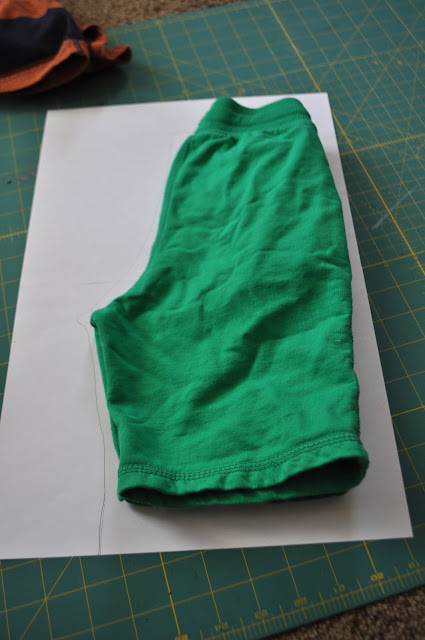 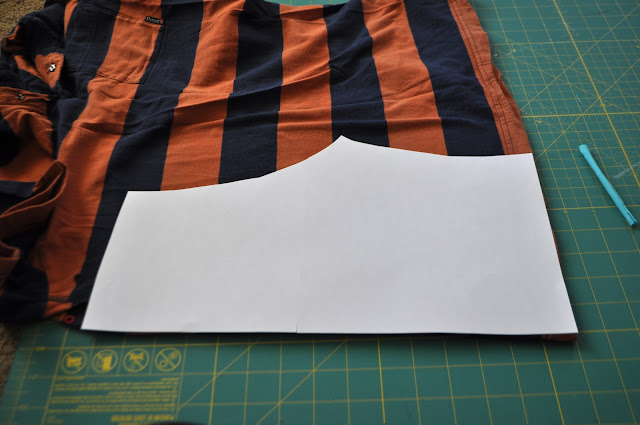 After cutting out both sides I had this. 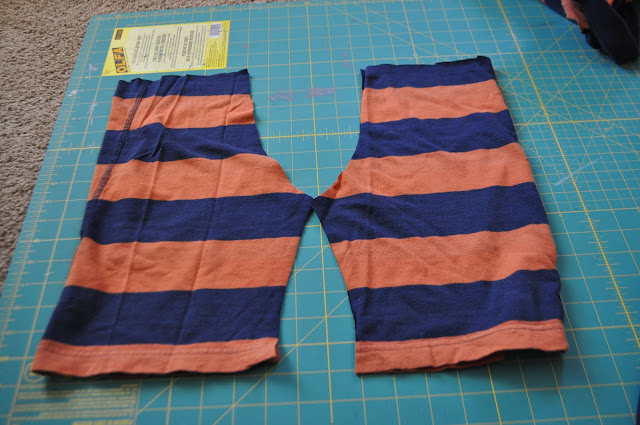 Next I opened the short and put right sides together and sewed along the white dotted lines in the picture.  (See what I mean about that side seam not being perfect?  It doesn't really matter in the end and this way the stripes ended matching up perfectly.) 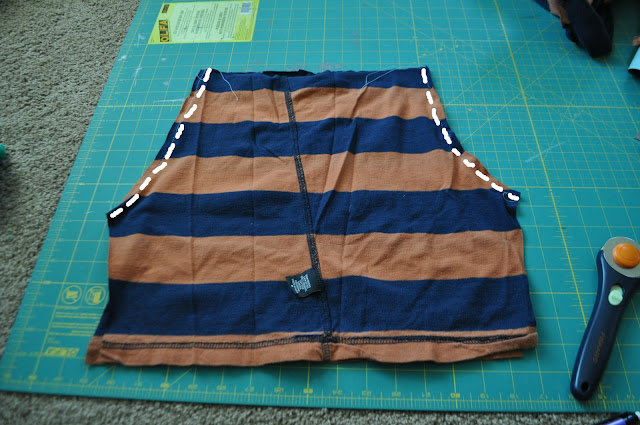 Then I folded the fabric the other direction to sew the crotch (as shown.) 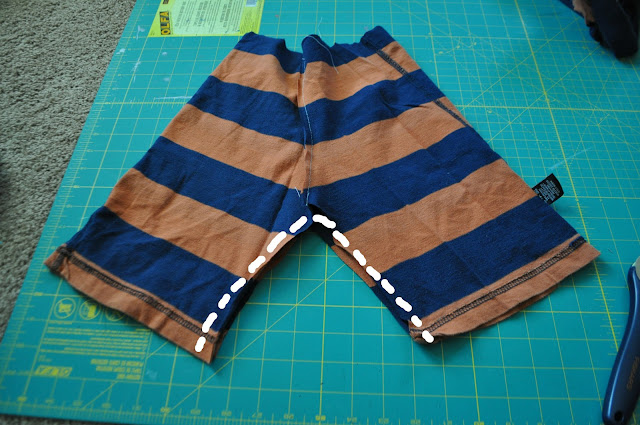 I folded over the top to create a waistband, leaving a whole to insert the elastic.  I sewed it using a zigzag stitch to allow for stretch when putting them on. 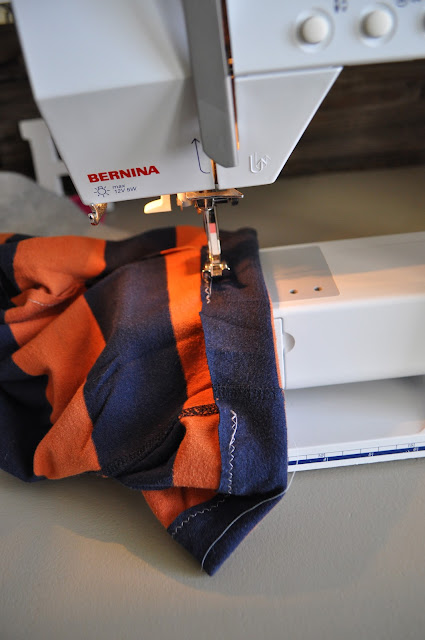 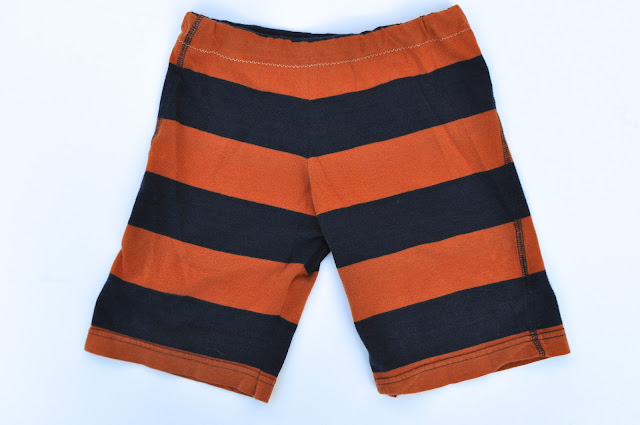 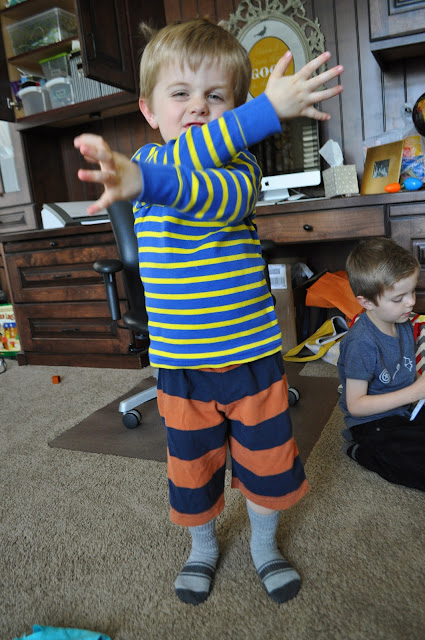 And I'm pretty sure they'll be crazy comfy for the summer and all his ninja moves. 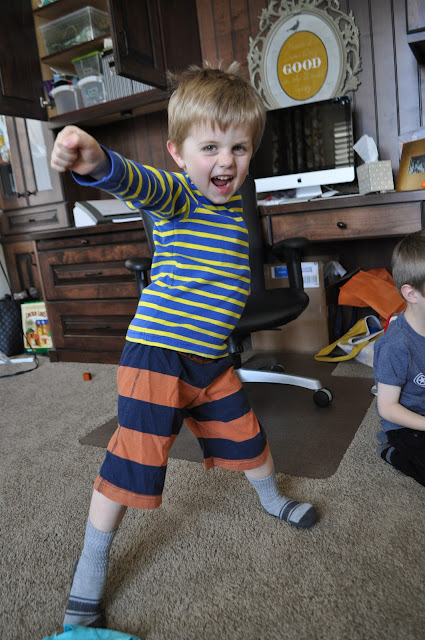 I have a whole bag of old t-shirts I was hoping to turn into t-shirt yarn to use to knit or braid a rug, but I think whipping out a couple pairs of these shorts for my son is a much more realistic goal. :-) Thanks for the great idea.

My son would love these!!! He only likes "soft" pants/shorts - he refuses khakis or jeans - shorts from a t-shirt - brilliant!

Your reason #3 is the main reason I *LOVE* elastic-waist shorts for kids!

Those are super cute.

That outfit is absolutely historical! Love seeing his fun personality! :) And I think this is just simple enough to be the perfect project for me to try!

This is exactly how I made a few pairs of pants for my almost 1 year old. They are comfy, and have worked well! I will have to make some shorts for the summer for sure. Thanks for the tutorial, I will have to refer to yours if I ever post pictures of my pants. I love how you can use the hem of the shirt for the pants, because I dislike hemming...A LOT!

Wow, I'm excited to whip some of these up for the grandson! Thanks so much for the idea.

I've made similar shorts for mine over the years and they are awesomely comfy. I have suggestion to offer....after threading the elastic and sewing the casing closed, I stitch in the ditch on both outside seams, crossing the elastic casing. This keeps the elastic from rolling and flipping. Does that make sense?

Those are really cute! I can't believe you whipped those up so fast.

how resourceful.i would imagine using Mommas knit shirts would work for some little girls shorts ?? super savings days at a thrift store could produce some great fabric too.

Yay yay yay!!! I will be doing this over the weekend! How awesome! Thanks so much for always sharing your ideas with us! Really, you rock! Oh and we did your nature scavenger hunt with the boys on our camping trip....HUGE hit! Happy Weekending to yall!

I think it's so funny how kids ham it up when they know their picture is being taken. When I need a blog photo of my boys all of sudden they're all karate-kid posing or something. Cute poses and cute shorts. Thanks for sharing how to make them.

Baden's such a character! Love his moves! :)
Great job on his shorts - love a bit of upcycling.

I would have never thought to use one of my hubby's shirts - I'm not sure why. I did make some pretty awesome pajama shorts out of a couple of hand-me-down shirts from a neighbor. Because they were smaller than a man's shirt, I had to use two shirts.

Here's a link to my project. The process was exactly the same.
http://confessionsofadesperatemom.blogspot.com/2012/06/old-t-shirts-become-new-pjs.html

Awesome idea there waterworks! Thanks!

response to #2. According to a friend in the biz back in the '80's these were called, "Granny grabbers". That's who spends $28 bucks on a pair of shorts for a kid.
Thanks for the post. This granny will be using it soon.