The Quest for the Perfect Playroom - Part 2

Today I'm going to show you these fun frames in the playroom.  Come on.  Let's take a little tour and I'll share some of the room's history, too. 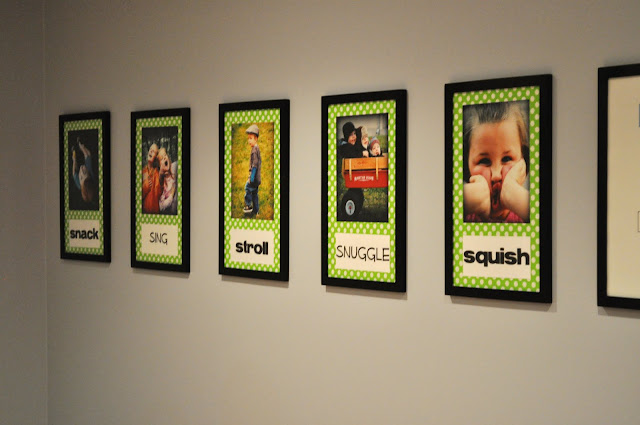 This is what the playroom looked like before we lived in this house.  Wow, lots to take in....really bright colors, toy overload, cardboard cut-out of Hannah Montana?  Yikes.  It was a bit overwhelming. 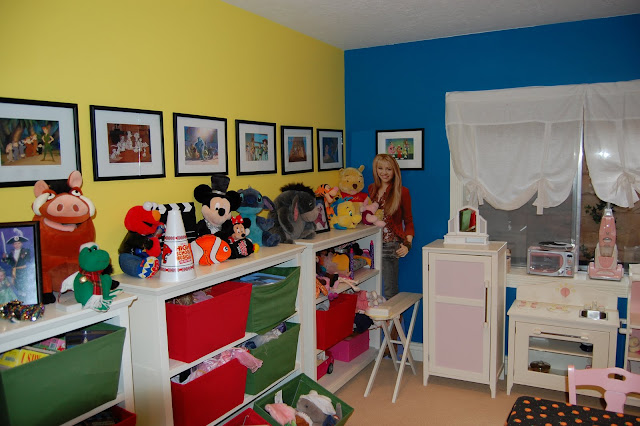 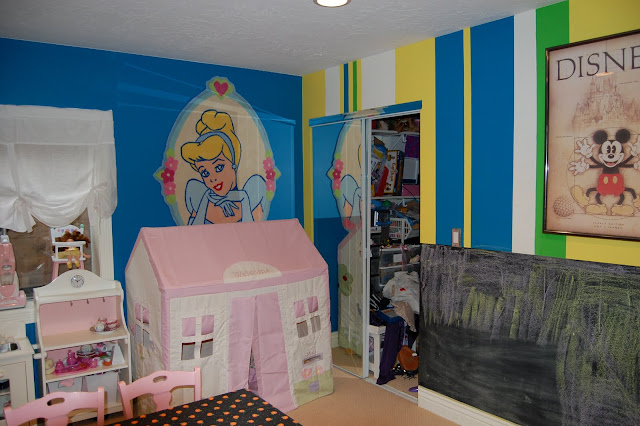 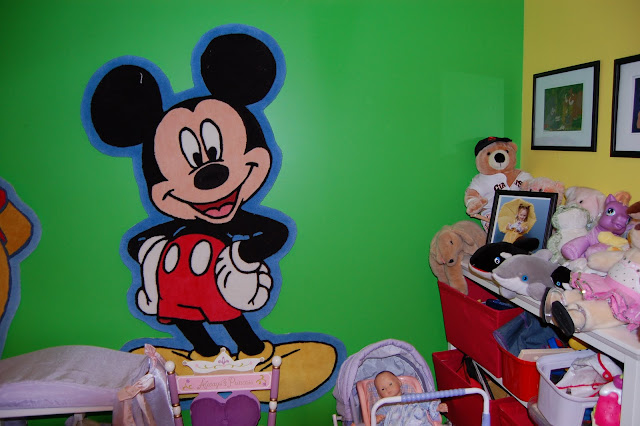 When we moved in, the room had been emptied, but there were tons of nail holes. I have never seen so many nail holes in a home and eventually I got sick of filling them.  I decided to keep them on the wall that had Disney pictures accross it.
So, it transformed to this... 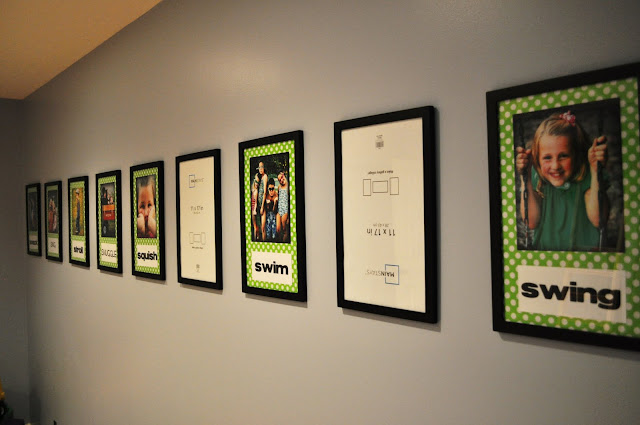 I bought a bunch of cheap frames.  I added an "s" verb to each picture for fun.  The backing is wrapping paper, so it was a cheap project.  They are all pictures of cousins.  (You can see I still have a few to fill.)  I love this idea because it helps my kids remember all their cousins, seeing that many of them live far away.  I also like the strong statement that repetition makes when decorating.
We also now have a ladder for the apple tree, thanks to my wonderful, talented father-in-law.  You can see Rex likes it.  (And I like his jammies and bed head.) 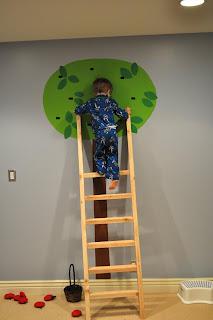 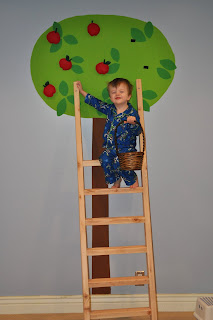 I thought I'd also show you these Ikea swings.  We have two in there (to avoid fights).  They are a hit and they're not too pricey - especially of you sew a pillow to go in them, rather than buying the blow-up cushion they sell. 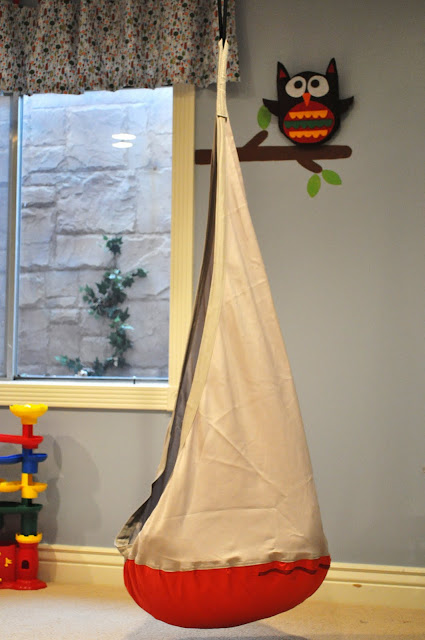 I have a couple more BIG ideas in progress for the playroom and I'm so excited to share them, but they are taking a little longer to make than I'd thought.  Stay tuned.  It's going to be really fun!
Pin It
Email ThisBlogThis!Share to TwitterShare to FacebookShare to Pinterest
by iammommahearmeroar at 8:00 AM

It is a real ladder. Rex must love to climb it. I would like to crawl into one of those chairs and read a book. Such cute ideas.

Can I come there to play? I love it!

You are just the craftiest lady EVER! I love it all! :)

These are so cute..all of it. I love the frames. THat is adorable.

I love, love, LOVE the pictures and...everything. I will feature this at somedaycrafts.blogspot.com. Grab my "featured" button.

This is such a fun playroom. I bet the kids never want to leave! I love the pictures on the wall, I so have to copy that!

I love your playroom! I SO wish I had a place to do this in my house!

What a great idea! Lucky boys

Hi, I'm in love with this tree. I just found your blog. What type of paint did you paint the tree on with? Just acrylic from the craft store or did you guy buy it from Lowe's or something?

p.s. I served a mission in Ukraine (russian speaking) and my husband served in Samara. Best wishes to your parents in Russia. Those snr. couples did AMAZING work there.

gave you an award and featured your pictures...all in one post! Love your playroom. LOVE!

I love the pictures of cousins. All of my DC's cousins live far away, such a great idea. And I love the curtains. But what I really love is your window well. Did you do that yourself, or was it already like that?

You are one crafty Momma!! I LOVE the playroom!

The room turned out great! I love it! And I esppecially love the cousin wall! My daughter has a lot of cousins too and that is such a great way for her to see and remember them all. Thanks for sharing!

The playroom is fantastic! I love all of the creativity and love that went into everything! Great job!

I hope you stop by my blog and check out my son's playhouse. I love creating fun kid spaces, too.

I am planning on doing something similar in our playroom. I LOVE this idea since all of our nieces and nephews live far away. And I pinned it to Pinterest :)