The Quest for the Perfect Playroom - Part 4

As you probably know, I have slowly been turning our playroom into the playroom of my the boys' dreams.  The last and final project is an interactive train mounted on the wall.  Because it's been a BIG project, I'm going to post it in pieces.  There are 3 carts involved and I'll showcase one each day.  My super-talented sister Cassie and her hubby have helped make all this possible.  Thanks guys!
Today is the steam engine and Monday and Tuesday you'll see the other two parts.  So, here is the little engine that could. 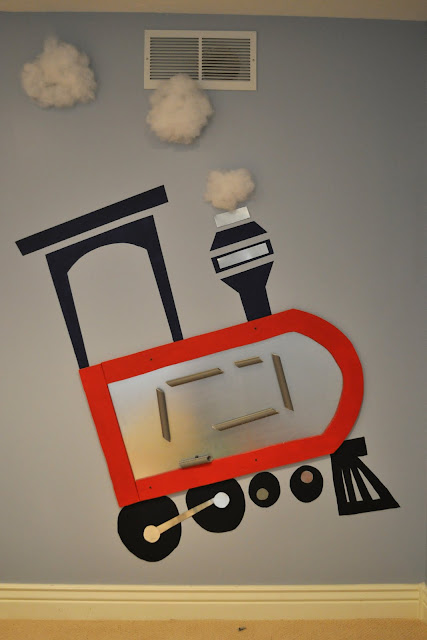 I bought a sheet of MDF and a piece of sheet metal.  I cut out the steam engine shape from the MDF like a frame.  The sheet metal is screwed into the back so there's nothing sharp for little fingers.  The frame is then screwed into the studs on the wall.
The rest of the train is just painted on.  The steam puffs are batting that I spray glued onto the wall.  They are high enough so that the boys can't mess with them.  I used a little bit of the excess sheet metal to dress up the rest of the train. 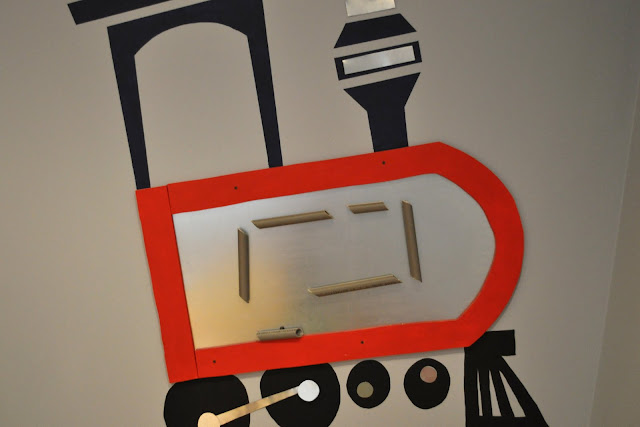 Now you might be wondering what the gray tubes are on the magnet area.  I bought this plastic pipe for about a buck.  I used a the same cutter that you use to cut branches to cut the pipes.  They are cut at an angle and they have magnets attached to them.  It's a marble run.  The boys will be able to rearrange the pipes in endless different ways to create their own marble runs.  I got the idea from this post on Ohdeedoh. 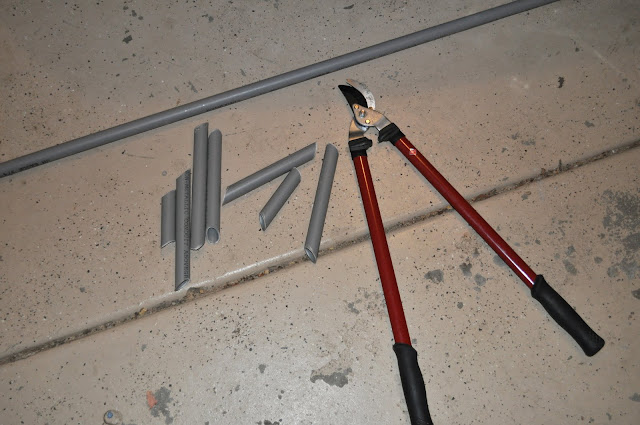 Like I said, I'll show you the next two carts on Monday and Tuesday.  I can't wait to get them totally finished and to show you!!!! 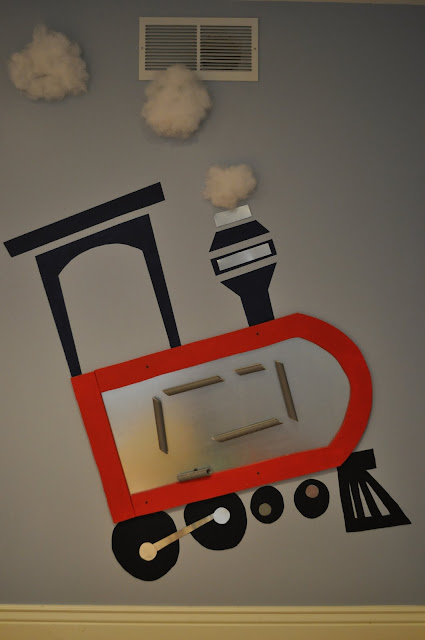 Tomorrow I have a nice, simple, springy Feature Friday.  See you then!  Thanks for dropping in.
Pin It
Email ThisBlogThis!Share to TwitterShare to FacebookShare to Pinterest
by iammommahearmeroar at 6:00 AM

This is so cute! and I love it that you have something for the boys to play with on the train itself! Let's just hope they don't find a ladder and mess with the 'steam.' (I have three boys and lots of experience.) :-)

I love it that the train is at an angle - just like the Little Engine That Could. Great idea!!

Very cute! I dream of the day we don't live in an apartment and can do fun things like this.

Love the idea for a marble run! You could do that on a fridge, too!

Cheri that is adorable! Can't wait to see the rest of the room.

WOW. seriously awesome playroom! My son would love that choo-choo!

Fabulous. Oh my word fabulous. I am totally loving this. You are seriously so creative!

You have some serious amount of creativity there!! I love this idea. What little kid wouldn't LOVE having a playroom with things like that. I'm looking forward to your other posts. :)

Oh my goodness...cute and my boys would love this! Too bad we are renting right now. I will have to file this idea away for later!

Best playroom ever! Loved the tree & mailbox ideas, this is the icing on the cake. Love it & I am sure the boys do too!