We had a pretty good week around here.  Rex has been requesting "Wolverine hair" for the days he has preschool.  Instead of telling him he might look a little crazy I just went with it.  I love his confidence and I hope he always feels comfortable expressing himself.  Here's the do along with his flexed muscles. 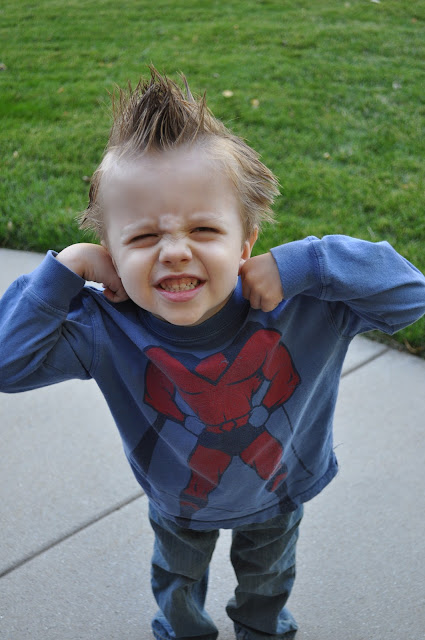 I was having a tough day with the boys a few days ago, so I decided we needed to do something fun.  I let the boys strip down to diapers and undies and paint themselves (with washable paint, of course).  Rex had a blast and asked if we could do it everyday.  Baden was clueless but we helped him out.

Lastly, I am most thankful for my husband this week.  He had a really close call.  He's been into cycling for many years and has never had a fall.  Wednesday morning at 7am he called and told me he had gone down.  I can't figure out how he landed because he had holes all over the front and back of his cycling clothing, on his gloves and he was bleeding in a lot of different places.  He must have flipped and rolled a lot.  He was really blessed, though.  He was fine and the sweetest man picked him up and brought him home.  When the man dropped him off he explained that he doesn't usually drive that route, but he just felt like he should that day.
Life is great.  I sure love me three men.
Pin It
Email ThisBlogThis!Share to TwitterShare to FacebookShare to Pinterest
by iammommahearmeroar at 7:32 AM

I love the painting pictures!! I used to do that with my little ones. We had a small apartment and we would all get cabin fever so I would tape a shower curtain to the carpet and tape sheets of paper to it and let them go crazy painting the paper and themselves! Thanks for bringing back a sweet memory. I hope your hubby is OK and any injuries heal quickly.

love that hair! And hop your husband recovers soon. That's always scary. My husband was in a car accident a month or so ago and had to spend a night in the hospital, scary stuff.

First of all, LOVE the shirt Rex has on. So cute :)

Secondly, isn't it awesome how God just sends people exactly where they need to be! Thank the Lord that man listened and went where he was told. So glad to hear you hubby is doing well.

Love the hair! And how letting kids be themselves inspires confidence. We love your blog and have given you an award. Pop over to the Green Phone Booth (www.greenphonebooth.com) to accept.

I really enjoy your blog, you are genuine and so creative!

If you would like you can pick up the award at my blog. If not, just know your blog has impact and is a joy to read!
Blessings,
Aubrey
aubrey-transformed.blogspot.com

We are glad Jeff is doing better too. Love ya!
P.S. The boys are adorable as usual....and I don't think I'm parshal at all! :)

wow - that is so scary!! my husband bikes to work everyday, so i think about things like this a lot. so glad that your hubby is alright! what a blessing that the man who picked him up drove that way.

We live in a city where bikes have the right of way at all times but most people don't pay much attention. I'm nervous everytime my husband rides in to work.

I love that your son asks for Wolverine hair. I can't believe my oldest hasn't thought of that yet. He's going to be Wolverine for Halloween so we'll have to let his hair grow until then so he can have the hair to match.

So glad your husband is ok! and the kids are adorable as usual...I dont know if I'd be brave enough to let my kids run around with paints...lol but it sure looks like they had fun!

Tell your son he rocks Wolverine hair! He makes ME wanna wear it like that! :o) Love the paint idea!

sweet stories today. they sure have a way of making one feel blessed and thankful. cheers.

Love it!! I totally have at least two sets of pictures of my boys doing that on rainy days in our garage.

Looks like the kids had a great time playing artists! I have never done this with my boys, I may have to try it. Glad to hear your hubby is okay. Things always happen for a reason :) Have a great week.