Not too long ago Disney from Ruffles and Stuff did this fabulous shoe refashion.  While I have painted my shoes before, I hadn't thought of what she did and I happened to have a really similiar pair of shoes to try it out on.  Here's Disney's before shot.﻿ 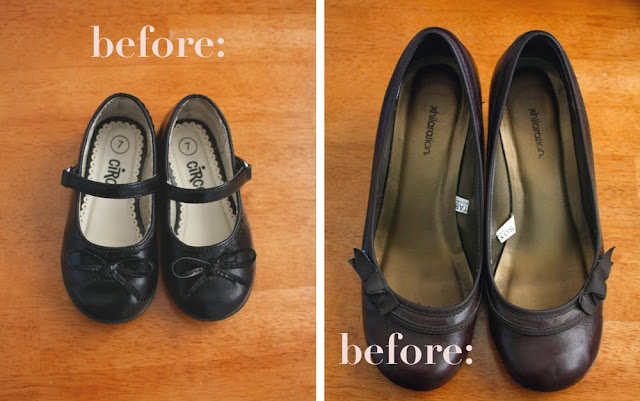 Here is her after.  I thought it was super smart and chic.﻿ 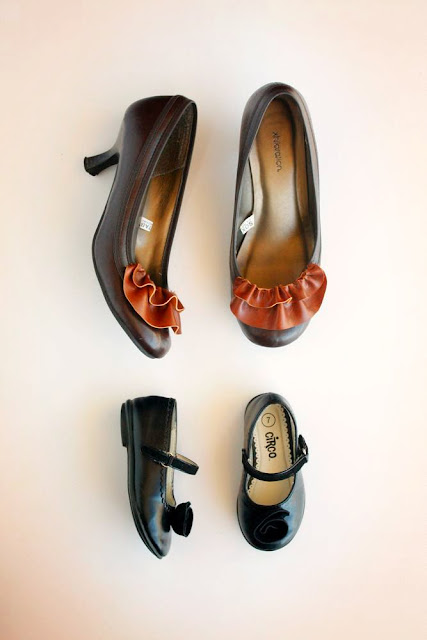 While I ended up doing something different, I still credit Disney with the idea because I never would have thought of refashioning these shoes.  I've had them for years, but I didn't really like them any more and I might have sent them on their way.  Here's my before. 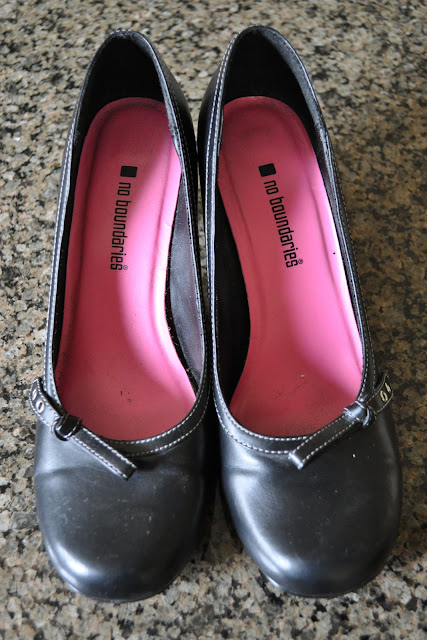 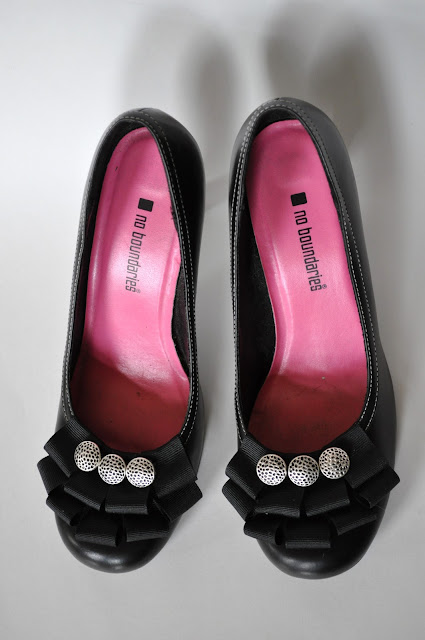 ﻿
I'll give you a quick run-down on what I did in case you want to do some similiar shoe surgery.  First I removed the bow-loop-thingy.  (Yes, that is what it's called.  Surprised you didn't know that.)  It was really on there!  I had to lift it up and saw off the glue with a knife, but I won.
Then I made some loops with grograin ribbon and hot glue. 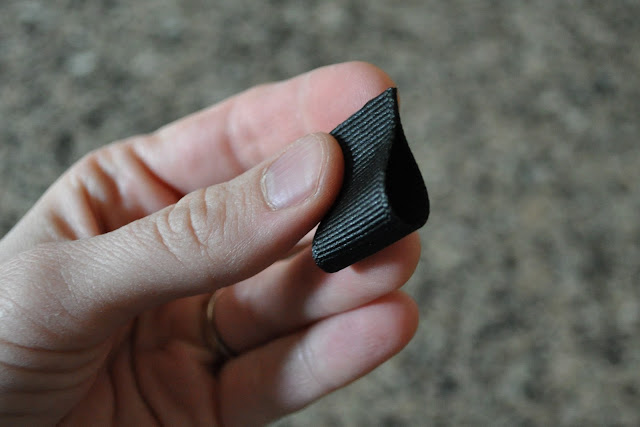 I glued five loops in a row (overlapping a bit) about an inch from the top.﻿  (This picture shows three loops, but I ended up adding more.) 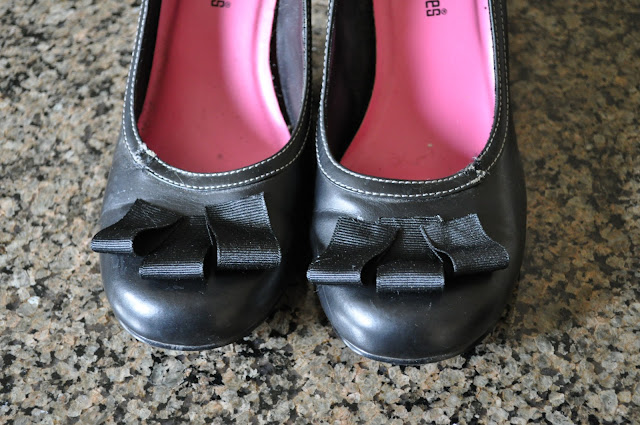 When I made loops for the top row I left a bit of ribbon at the top so I could fold the ribbon over into the shoe. 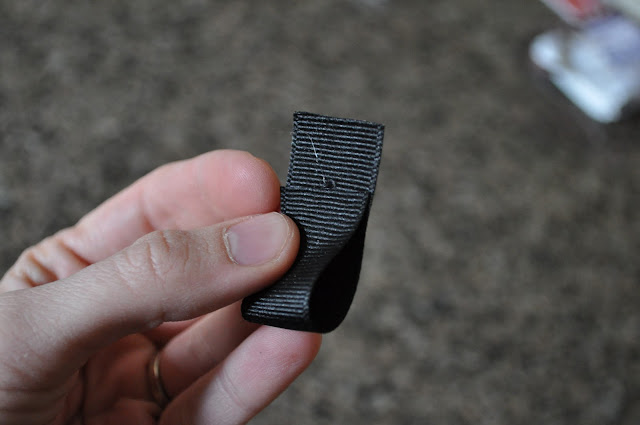 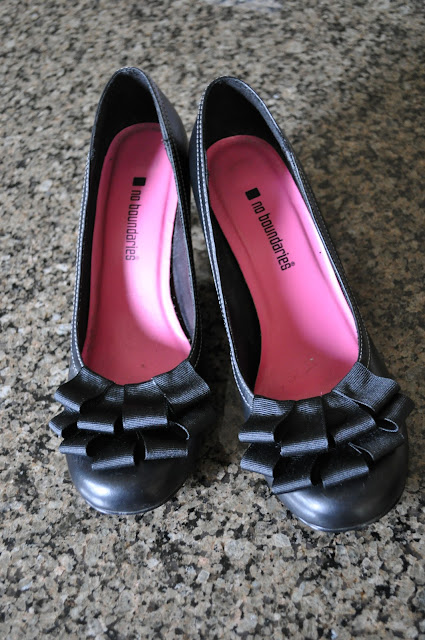 They didn't feel totally done, so I bought these in the jewelry department at Hobby Lobby.  They were 50% off and I liked them. 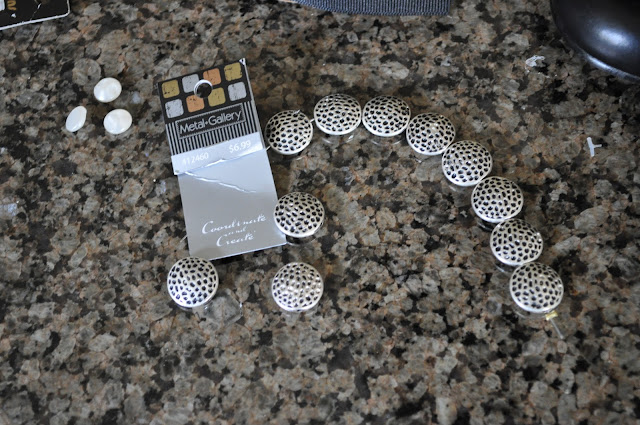 I glued three to the top as shown.﻿  You could always embellish with buttons or flowers. 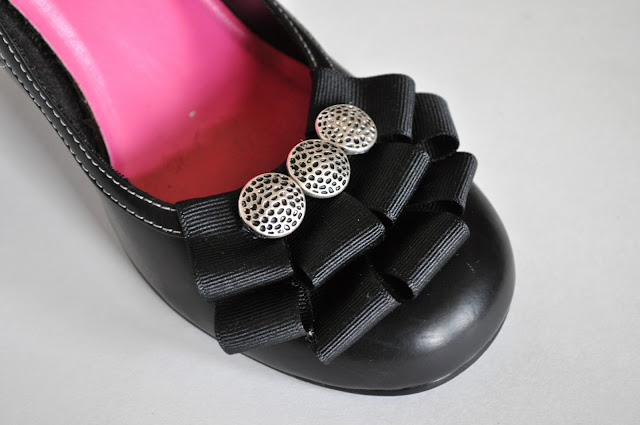 And now I'm much happier sliding my feet into these. 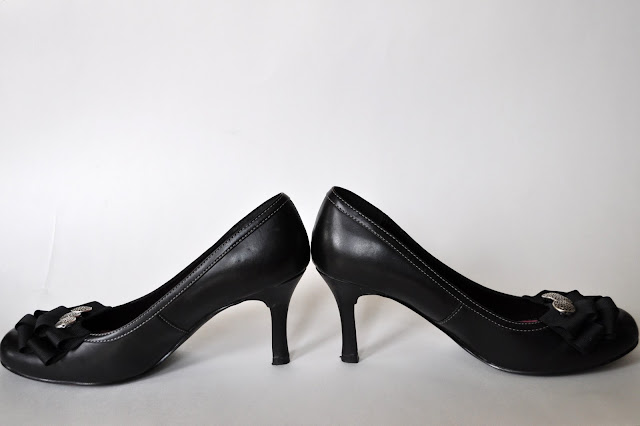 I would have loved to have shown a picture of them being worn, but it just wasn't going to happen.  Yeah, one of those days.  Imagine though, that there's a really cute picture of me with funky tights and a gorgeous kelly green dress with black piping and I'm walking down a busy street in New York.  (Okay, so I don't have a dress like that and I live in Utah, but a girl can dream, right?﻿) 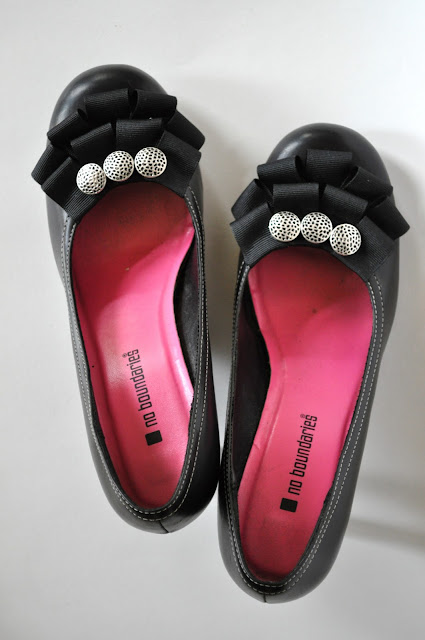 You can check out Disney's fun tutorial HERE.  Thanks for reading my blog.  Have a great weekend!
Pin It
Email ThisBlogThis!Share to TwitterShare to FacebookShare to Pinterest
by iammommahearmeroar at 7:15 AM

Oh fantastic!! I saw the original post you were inspired from, and thought, what a great idea, but the leather intimidated me...this ribbon action I could TOTALLY handle! I think I will have to try this...off to rummage through my old shoes!! thanks so much :D

Gorgeous shoes! They look so much better now. You should make yourself that kelly green dress ;-)

LOVE!!! i actually have the very same pair of shoes... though i have no idea where they are in my closet... or if i even still have them! but what you did with them is great! i never would have thought of that!

That's super spiffy! I've seen people alter shoes, but it always comes out looking ridiculously like a third grader did it, these are awesome!

I. LOVE. THIS. I want a pair!!! It sounds kind of silly for me to go out and buy a pair just to do that to-- right? It defeats the purpose of refashioning to save money but I don't even care. That's how cute those are.

You are a very clever rabbit~! Must be that mountain air you breathe everyday...clears your head for all this creativness~!~!
Good Work on those shoes..
Ta Ta For Now from Iowa,,annieptigger@aol.com

Great job altering your shoes...love the last pair and I too dream of being fashionably dressed while walking thru Manhattan.

Oh my heavens! So. Fabulous.

I love the "jewelry" detail you added! I had to stop and think about my shoes, but I think I like all of them just how they are. Trip to the Thrift Store is in order!

Awesome! I love how they turned out, I wouldn't believe that the old ones were the same shoes if you didn't have evidence!

These are beautiful! I really want to try my hand at shoe refashioning!

You have vision girl! I love these. You made these so beautiful!

I love the way they turned out.

Woman of Many Thoughts said...

My husband's not too excited about this blog post...I had a whole box of shoes that I was getting rid of until I saw this post. Moohahahahah ;)

I LOVE THIS!!! I love Disney's tutorial, but I was afraid to do the vinal ruffle. I know I can do this!! Thank you!!!

Cute!!!! I have a ton of shoes and need to drag them out and play

Oh my! These are so beautiful! Hurray for the glue gun! I totally would have glue mine if I weren't so rough on my shoes.
Thanks so much for the feature! :o)

Ooohhh... so cute! I just redid a pair of shoes and now I'm kind of wishing I had seen this first. It's super cute. Guess I'll have to find another pair of shoes to "fancy".

Jennifer from The Craft Patch

oh I really like these. I may have to do this to my black shoes that are just boring to me now. I like that these are different than the typical ruffles I see everywhere. Thanks for the idea!