A couple of weeks ago I got a sweet e-mail from a thoughtful reader named Kelley.  She told me about this free printable Batman preschool pack that she had found right HERE.  She thought Rex would like it and she was absolutely right.  It's from Carisa's blog which is called 1+1+1=1.  Her blog it is full of awesome printable eductional awesomeness.  Yes, that's right.
We downloaded the Batman pack.  Rex was literally jumping up and down as he watched the pages come out of the printer.  There are some pages that require cutting, pasting, and coloring, so I printed them off on regular paper. 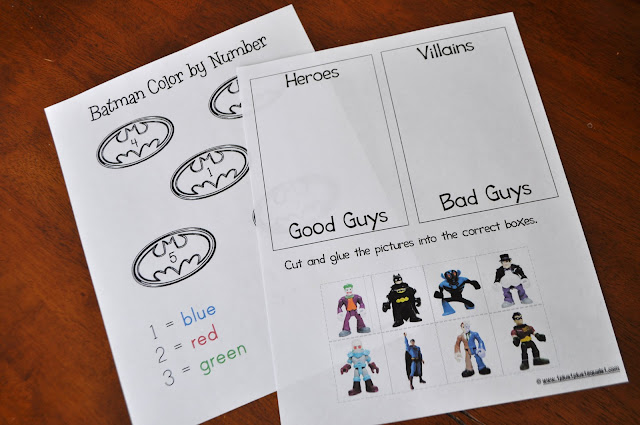 Rex is getting pretty good with scissors and he was giddy about cutting out the characters and sorting them as "good guys" and "bad guys." 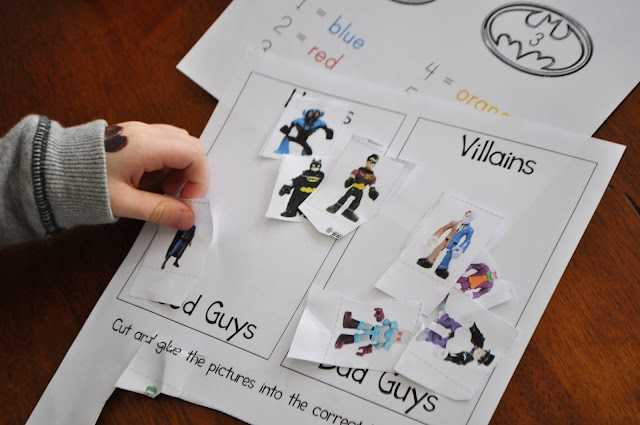 For some of the other sheets that just required some tracing I printed them off on cardstock and put them in a page protector﻿.  (This page was meant to be used as a matching worksheet, but until Rex knows his numbers well he just counts them and then traces over the number.) 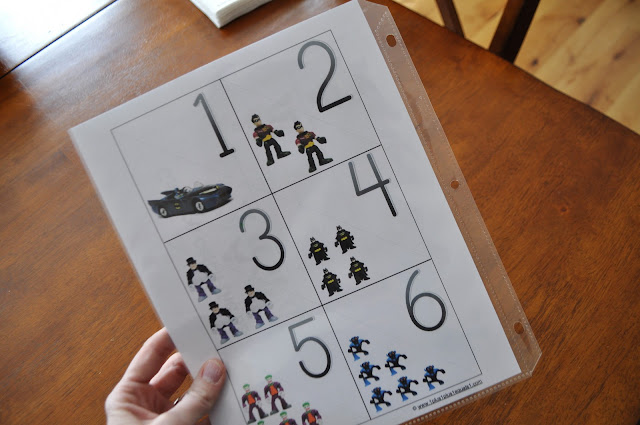 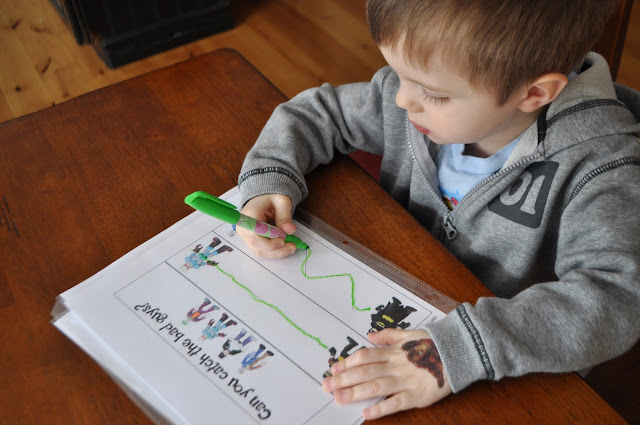 Do you want to see the other preschool packs Carisa has made?  Click HERE.  She's made them all free for anyone to use and there's something for everyone.  Thank you Carisa for performing such a kind service.﻿  You made Rex and I both so happy today!

And, in other news.....we're going to have a fun contest here that I'll tell you about on Monday.  Think boy.  See you tomorrow!
Pin It
Email ThisBlogThis!Share to TwitterShare to FacebookShare to Pinterest
by iammommahearmeroar at 6:00 AM

This is so perfect! I have a nephew who thinks the is Robin (some days he's Iron Man) and my other nephew is Batman. His birthday is on Monday so I will print these out and add them to his birthday gift. Thank You!

Thanks so much for sharing. I am going to share this post with my readers, and send them your way! :)

Here's my link where I featured your blog in my Fridays Favorites :)

holy batman. my son is going to FLIP! Coincidentally I am in charge of preschool next week! SO THANKS! I'm going to be linking on my facebook page!

This is so cute! What a great way to get preschoolers excited about doing their worksheets :)

(And very generous of Carisa!)

I just wanted to say thank you for linking to this site! I have been wanting to do more structured activities for my little ones and this site has so many ideas, it is PERFECT! You just made my day. :)

Thank you! (and Kelly. And Carisa.). I am always looking for neat ways to educate my son while having fun. I might laminate the practice pats.

These are awesome! Thanks a ton!

definitely have to check out that site. I was just texting my SIL this morning about how I'm going to try homeschooling Nicole preschool. IF that makes sense, it seems sortof like "uhuh... durrrrr" in some ways, for a SAHM. But anywho, I was doing some activity books with Nicole this morning on learning things like letters and numbers (Turns out Nicole can count to eighteen but doesn't recognize number symbols. My baaaaad!) and she was very into it.

And then she tried to pencil sharpen her finger and I gave her a bandaid and sent her downstairs to play Diego on Wii. Where's my parenting award?!

These are amazing!!! My son's preschool is doing "things that go" next month and several of the packs will work perfectly!

Thanks for posting. That is too cute!

Wo!!! That is awesome! I love the page protector idea. That will make great church quiet books.

I am so glad you enjoyed the Batman pack, thanks for posting about it!

I don't know what it is about dry erase markers, but my son will write just about anything I ask him to if he gets to use a dry erase marker. sheet protectors and laminated items are a must around here! ;-)

This is awesome! So perfect for boys! Thanks for the link to a great blog.

Thanks for the link! We did the How to Train Your Dragon pack yesterday. :)

how cool! thanks so much for sharing!

I love your blog. I love how you include your family and they make me laugh. Thanks for sharing all that you do.

Thank you sooo much for posting this, I found it today while trying to find preschool worksheets for my son! You are awesome!