I saw these glow stick lanterns on HERE on Lil Boo Blue a while back.  We had a friend over and explained that she had pinned them on pinterest.  I actually had some glowsticks lying around the house.  (They are often found in the dollar bin in various stores.)  So, we tried it out. 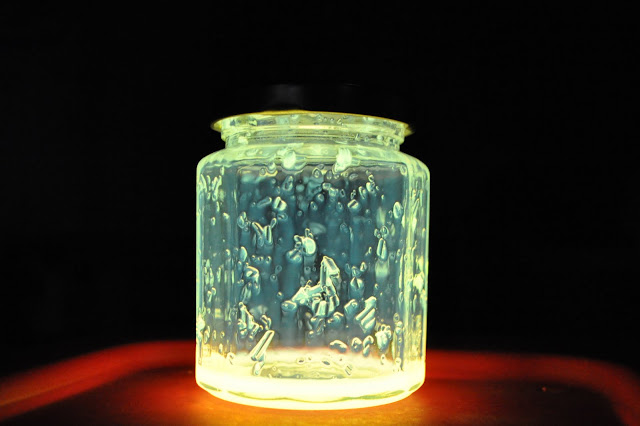 It was pretty cool and a great boredom buster.  Here are a few tips in case you want to try it out.
1) From the pictures, you'd think the stuff in the sticks is a gel.  It's not.  It's a thin liquid.  It also has these bits of thin glass or plastic in it.  Just dump them in too.  This part is a job for you and not your child. 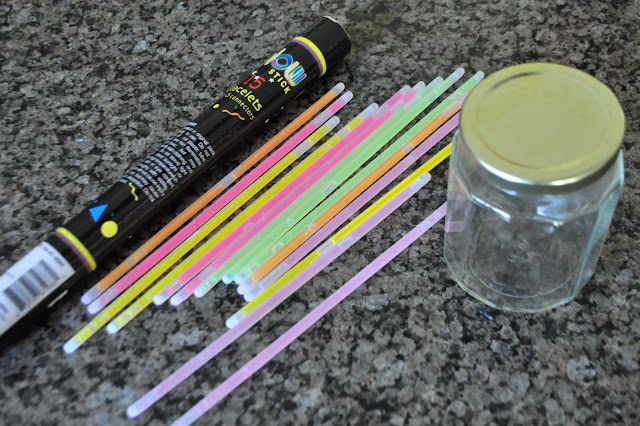 2) Cut them open while holding them in the jar.  I got some all over me the first time I cut one.  It kind of bursts.  It made me and my shirt glow.  It looks kind of cool, but I'm not sure if it's going to come out of my clothing.

3) They don't seem to glow as long as they do as sticks.  So, if you want to let your child go to bed with it, make it right before bed time. 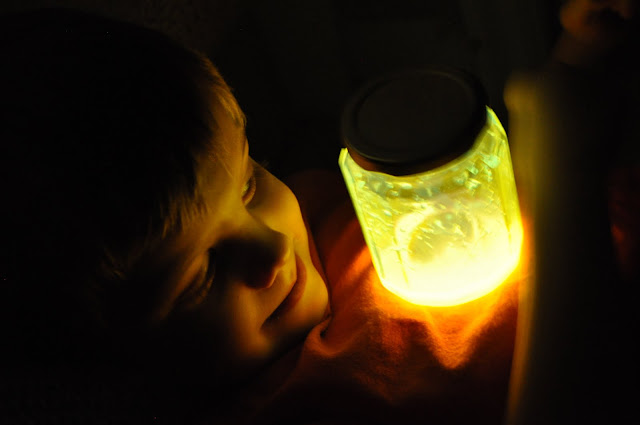 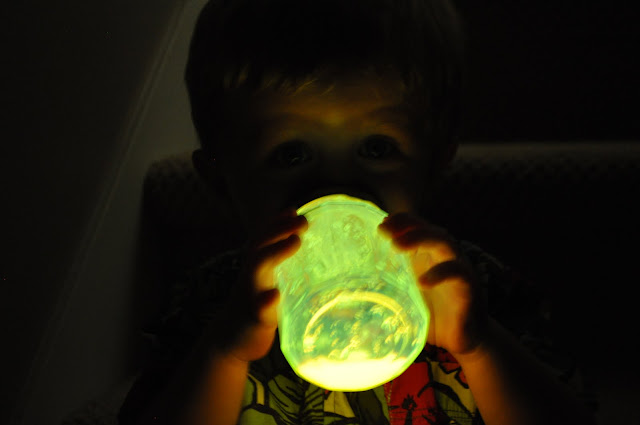 4) You can have a lot of fun taking pictures with them.  We went into our dark basement and turned off the flash on my camera.  That meant the shutter speed on my camera was crazy slow and we had some fun with it.  Rex thought this was awesome.  He whipped around doing superhero moves and then wanted to look at each picture. 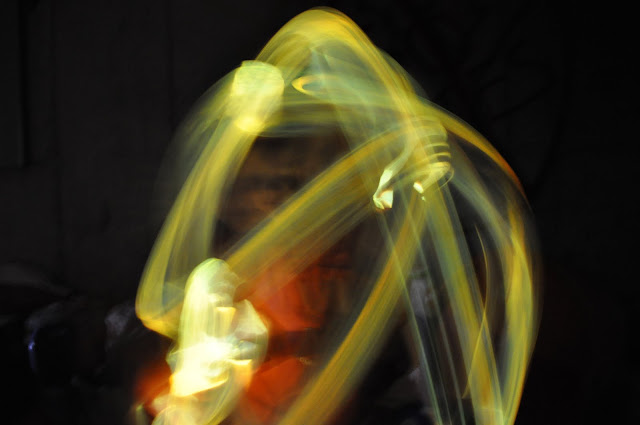 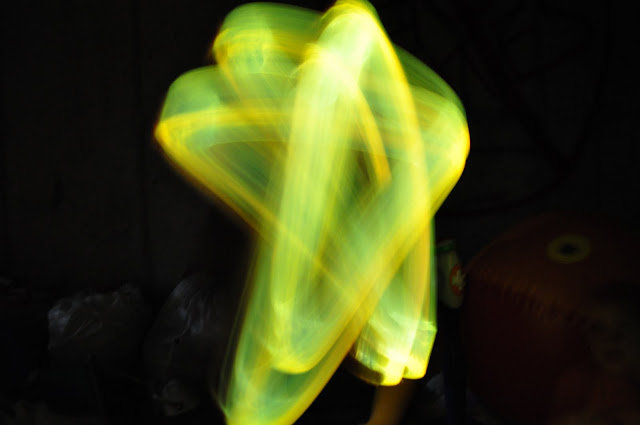 And there you have it.  Thanks for the sharing the idea, Ashley!
Thanks for reading.  Have a great day!
Pin It
Email ThisBlogThis!Share to TwitterShare to FacebookShare to Pinterest
by iammommahearmeroar at 6:00 AM

this looks like a fun idea! we love glow sticks - thanks!

I'm glad I stopped by! My grand daughters would LOVE this project!

How many glow sticks per jar did you put?

Oh my word, the kids are going to love this one! I love your Feature Fridays, I’m not able to keep up with all the crafty blogs I’d like, so it’s nice to know that I can find ideas that are actually manageable with small children here every week. :o) Thanks for all the hard work you do!

A must! I also have 2 boys and they are going to love it... thanks for sharing and enjoy your weekend!

Jenna - I think we did about 6 glowsticks in the jar. It's hard to get a ton of liquid out of them, so it took a few.

How fun and your pics are cool too!

Oh my - that takes me back to a party where they (the intoxicated) thought painting a guy's t-shirt with a surplus of glow sticks was a good idea. They painted the t-shirt, the white kitchen wall of the house we were renting, and the industrial wax I had just applied to the kitchen floor. The wall and floor had to be bleached to remove the remaining green tint. I hope you mileage varies!

What a fantastic idea!!!! So great! I'm sure you know about this already but do you know about the BULB setting on your camera? it lets you hold down your shutter button for as long as you want so you can take a really long exposure... it makes using glow sticks really fun!!! We (my husband and I) took some pictures using it... the pictures are at the very bottom of this post http://jacksonshappenins.blogspot.com/2011/07/independence-day.html also if you ever get caught in a fantastic lightning storm you could do this too :D http://jacksonshappenins.blogspot.com/2011/07/lightening-date.html

Such a fun idea!
The ones that I pinned on pinterest suggest using glow in the dark paint for something that will last a bit longer than a regular glow stick.
I like that they make me think of summer and fireflies!
Have a Blessed Weekend!
Biz

This looks awesome! I can't wait to try this!

It will probably come out of your shirt. Once, in college, we went into a big cave and broke a bunch open, then splattered them all over ourselves and the cave, then played hide and seek. It was probably not the greatest thing for the environment but it was a lot of fun and I don't remember it sticking around on my clothes.

I got some on my shirt this summer when one accidently broke and it came out with oxyclean...although I think any stain remover would work well.

This post is magical, the last two pictures are amazing.

Wow, that's a total flashback to our homecoming dance one year during high school, they gave out grow necklaces (and Mardi Gras beads). Really, who decided that was a good idea?!? In about 10 minutes the entire gym was splattered with glowing paint. Ah, to be in high school again.

Ah! I love this. We are definitely going to do this for Halloween. So...Owen bit through a glow stick one night and got it all over him and his sheets. I was super relieved to find it is non-toxic AND it does come out. Just treat it immediately. I washed his sheets that night and it was fine.

My glow stick addict daughters sincerely Thank you oodles for sharing this!
To the $1 Tree with us!!! :o)

Long and short, I was at a concert and the drunk person beside me sprayed me with her broken glowsticks. So for a few hours my favorite sweatshirt glowed, but it didn't stain. Threw it in the wash the next day, good as new.

The pictures were great, you should try gettting them to write messages, when it works it is amazing.

I love it ,what a wonderful idea
I wonder where I can buy some glowsticks?

Ooooh! Shiny! I *love* shiny! And don't get me started on glowy! I wonder how long they last. This would be great for a slumber party! I just don't know where to find glowsticks here in Portugal without going clubbing. :P

Haha! We did this too last week and the kids loved them! I added a pipe cleaner handle and they had a blast exploring the back yard in the dark! Such a clever idea! Saw it on Pinterest too! Also saw an idea to stick smaller glow sticks into a balloon before blowing them up. Might make for another fun evening!!

Sherrill, They last for a few hours I'd say, but you have to be in a really dark area to see them, so I don't know if they'd make a very goo centerpiece. Good luck!