The Grass is Always Greener Sign and a Silhouette Promo

Before I show you the project for the day I wanted to tell you about a Silhouette promotion going on from now until March 28th.  Here's the deal:

Today I wanted to show you a project I just used my Cameo to create.  Remember the quote you guys shared with me on Saturday?  I liked it so much I made a sign.  (There were a few different versions of the quote, so I went with this one.) 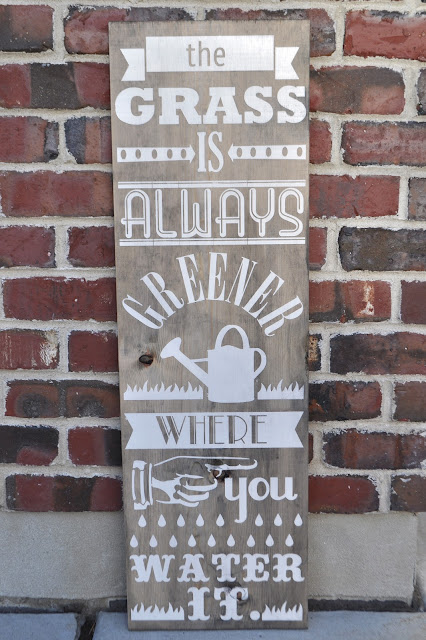 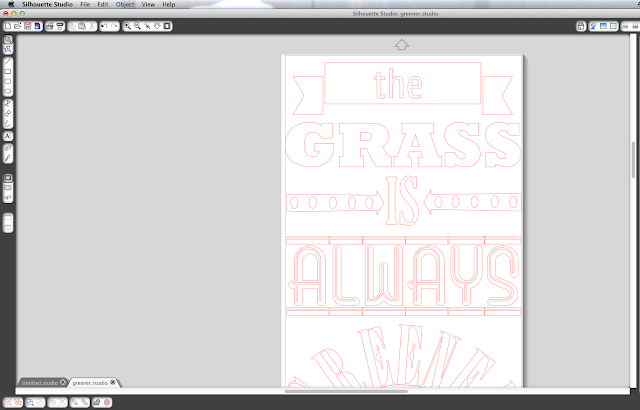 I cut the vinyl without a mat, which I had trouble with in the past.  No problems this time around.  It cut it perfectly.  Then I weeded out the negative space. 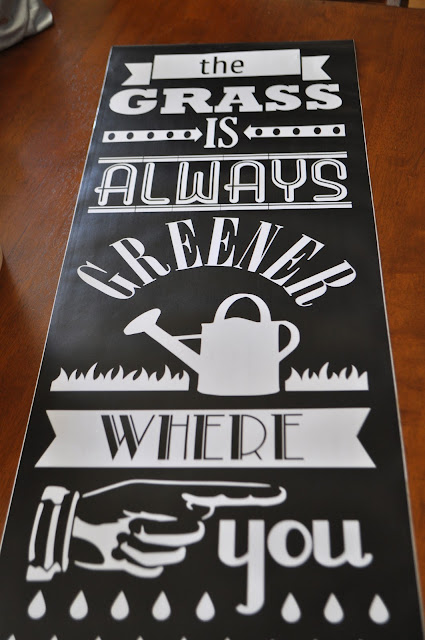 I applied the transfer tape....because I wouldn't dare not use it. 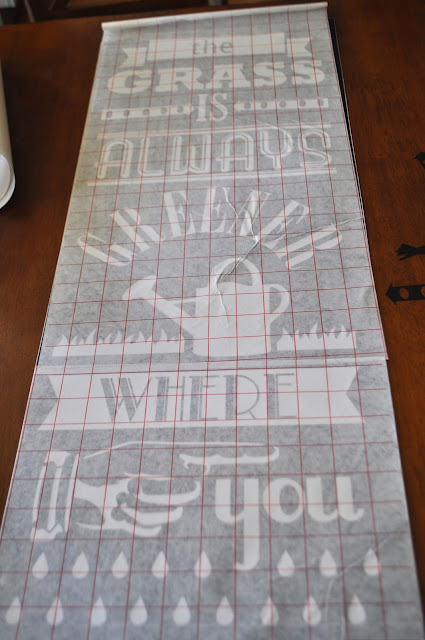 I applied the vinyl and sprayed white spray paint in three, separate, thin coats.  I removed the vinyl when the paint was barely dry.  I don't like to leave the paint too long or I think the vinyl ends up bringing some of the paint with it. 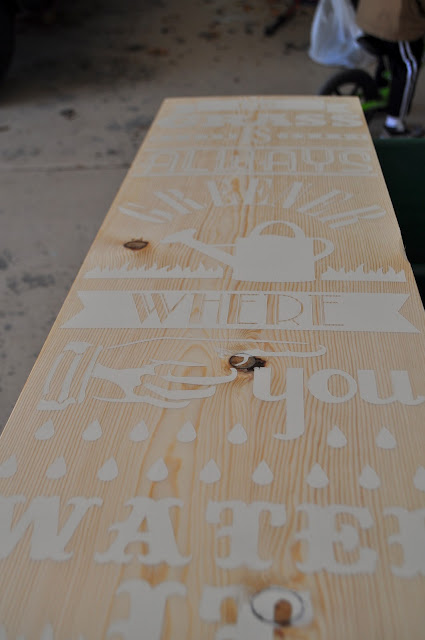 Now this is where things got crazy.  I wanted to weather the wood.  I read five hundred tutorials on how. I purchased a steel cleaning thing and white vinegar, but it wasn't actually steel wool (even though the package said "steel") so it didn't work.  Then I drove to five stores with my kids to find some.  I finally found it but I didn't have enough time for it to work properly.  I tried to rush it, but that didn't work.  It needs to sit in the vinegar for 24 hours.  Then I got super annoyed and took action. 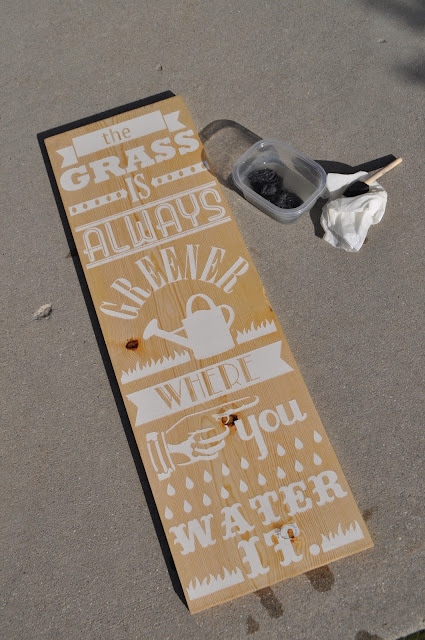 I decided to glaze it by watering down black acrylic paint.  I should have done this hours before hunting down all the stores for steel wool because it worked exactly how I wanted it to.  Yay. 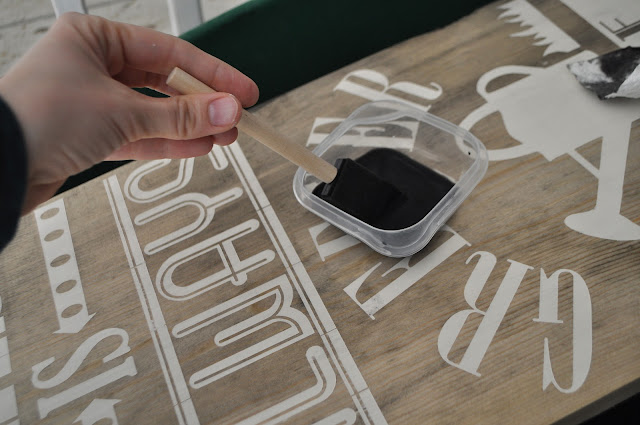 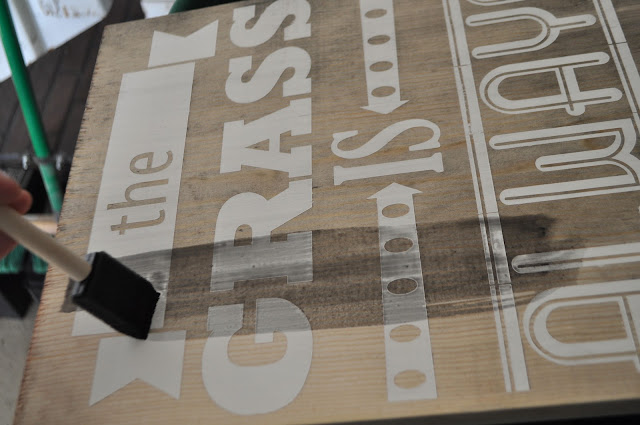 ...and then wiped it off with a paper towel.  Super easy and it still looks like gray, weathered wood. 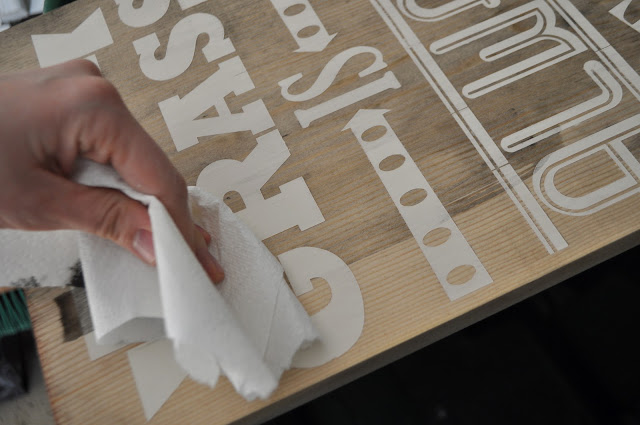 I need to give it a little clear coat, but it's essentially done.  Wahoo!

ADDENDUM: You can now buy the vinyl for this sign HERE for just $20 and there's another tutorial for how to complete it HERE.

I feel like I had a lot of project frustrations and fails this week, so I was really ecstatic when this turned out the way I had envisioned it.  Rex has told me multiple times this week, "Not every project works out Mom."  He's a funny little guy with a lot of advice for being a four-year-old.

What a super cute sign! Is there any deal on the Designer Studio software for those of us that already own the Cameo?

Absolutely adorable! I love the quote and the idea... you blended them flawlessly :D

I adore this!! You did a fantastic job - just perfect.

Where are you going to hang or place it? What about somewhere where the family gathers the most? There is a lot of watering that gets done when family is together.

P.S. How is the boys bathroom decorated? I went through the archives looking for a post on that topic but couldn't find one. I'm just curious because the rest of your house is done so nicely.

This is too cute! I don't think I would be able to pull off something so cleanly done - wish I could buy something like this!

I love this combo of the quote too, much better than the images I get with the ones that say the grass is always greener where you fertilize it. =)

I have done so many fun projects that have been inspired from your posts, probably because I have boys with similar ages.

I have the Cameo and have had issues using it with the mat so I have been reluctant to cut vinyl because I didn't want to waste it but would really like to try now. I would love more info on the layout for designing this if possible.

OMG I love this sign. You are so awesome!

I love this sign , and thanks for the promo code for the design studio !
I wonder if it would be possible for you to share what fonts you used , and where you got your graphics.
Glad I found your blog!

I love it! I so wish I could make my Silhouette sing like yours does! Wait, that totally goes against the message in your sign! :(

I am completely in love! Any chance you could get me your file for this so I don't have to reinvent the wheel here? I got my silhouette Cameo for Christmas and I am having so much fun using it to decorate my home and my little boys (2&4). Do you have a shop or something?

Great job...I bet it felt so good when it was finished!

Going from store to store with kids can be a bit stressful...glad it all worked out in the end ;)

Your sign looks awesome! You are a talented chick.

I absolutely love your sign!....Can you make this file available in your etsy shop as well? Pretty Please???

Any chance you could share the file? I have access to professional vinyl lettering machines and would love to do this sign on a door off my back deck :)

It's not an easy file to share because you have to go out and download every font I used. Otherwise, it won't work. It's not a PDF, it's just saved as a Silhouette file. I'm not sure how to easily get to people who want it. Sorry!

Yes. Just read the red lettering at the end of the post. The vinyl is for sale, but you have to apply it to your own sign.