This first week of summer was a hit.  The boys and I had a lot of fun.  One day we were working in the garage when Rex found an old trophy of Mr. Roar's.  It was from his middle school days.  Rex thought it was the coolest thing ever.  He asked if he could go clean it up.  A few minutes later he returned and declared the trophy to be new.  He asked if I could take a picture of him with it.  It cracked me up.  I loved his pose, too.

(Sidenote: You know how sometimes your kids call things the wrong name, but it's too cute to correct them?  Rex calls trophies "loafy trophies" and it makes me giggle.  I can't correct him because I enjoy it too much.) 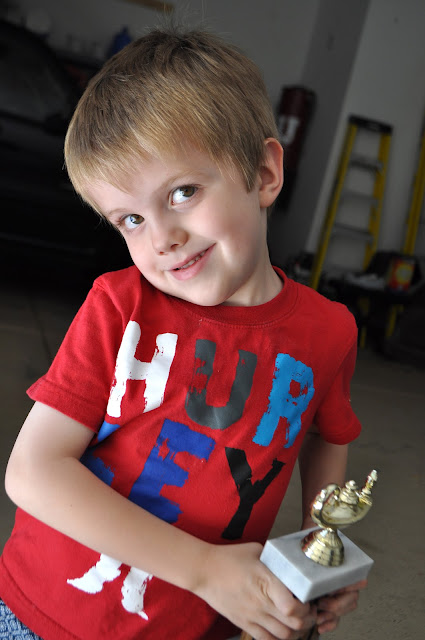 Maybe a star athlete one day?  (NOT if he gets my genes in that field.) 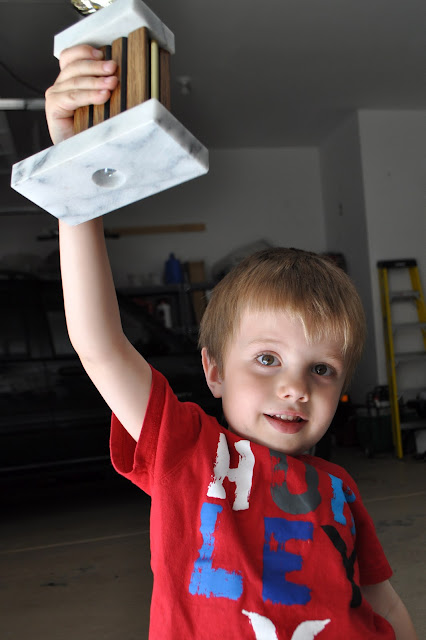 Yesterday we did something with the boys that I had a feeling they would love.  We took them to a demolition derby.  It was seriously fun and they really did love it. 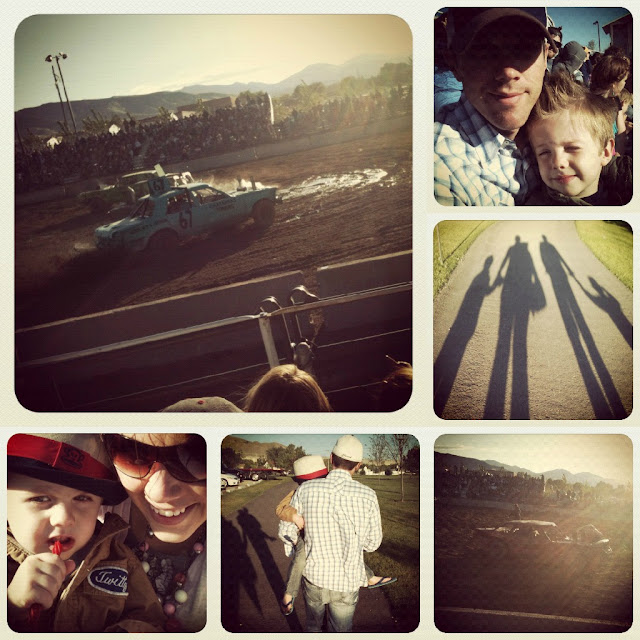 There are some things you only see at an event like a demolition derby.  They threw snack size cereal boxes into the stands.  What?  They had people sing random songs during the break from a rehearsal CD that kept having a woman's voice over the top of the song that would say "rehearsal CD."  It was a good time.  The boys are counting down the days till we go again next year.

I was also really grateful for you this week.  You guys are so awesome.  Thank you for all your comments about the mommy school ideas.  Thanks for your support and thank you for visiting here again and again.

I hope you had a great week.
Pin It
Email ThisBlogThis!Share to TwitterShare to FacebookShare to Pinterest
by iammommahearmeroar at 6:00 AM

Yes there own words are the sweetest. Kyas biggest now is froat, for throat.

I love the "loaf trophies". That is too cute. Your boys are always dressed so cute too! I love that hat!

You are so right in not correcting their speech. They will figure it out soon enough and you will dream of hearing those sweet mis-speaks once again. My daughter is six now and they are coming to an end. However, now I ask for definitions of words and that is pretty hilarious.

My 2yo loves to sing and often interprets songs wrong (or, his own way). He changed Queen's We Will Rock You to "We Will Rock You on the Boat." Kind of a Queen/Wiggles mashup. He asked my husband once what Phil Collins meant when he says, "no more, no more" in I Don't Care Anymore, and my husband said, "no more kids" (a little view into my husband's mental state at the time), so now he sings "no more kids."

You and your sweet family are too cute! What fun y'all have!

I love the shirt Rex is wearing! Did you make it? LOVE the derby. That is another thing I miss about being in Utah. They don't have derbies out here in Maryland. :(

Can I ask how you made that collage at the bottom? Looks like so much fun! My daughter has a hard time with "f" sound, so she always says "pood" instead of "food" and I think it's adorable!