Ever since I saw THIS POST at Mom's Crafty Space I have been dying to try my hand at making rock candy with the boys. 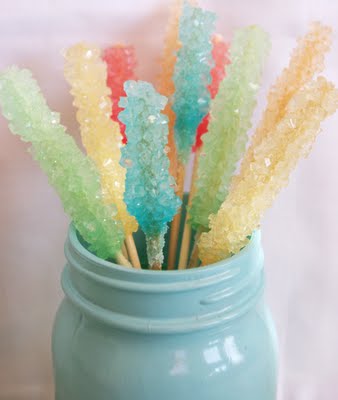 Last week we gave it a shot. 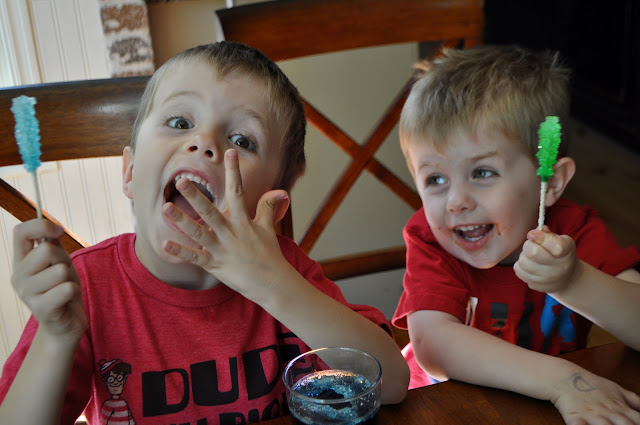 It takes about a week for it to turn into the rock candy.  We followed Heidi's instructions. 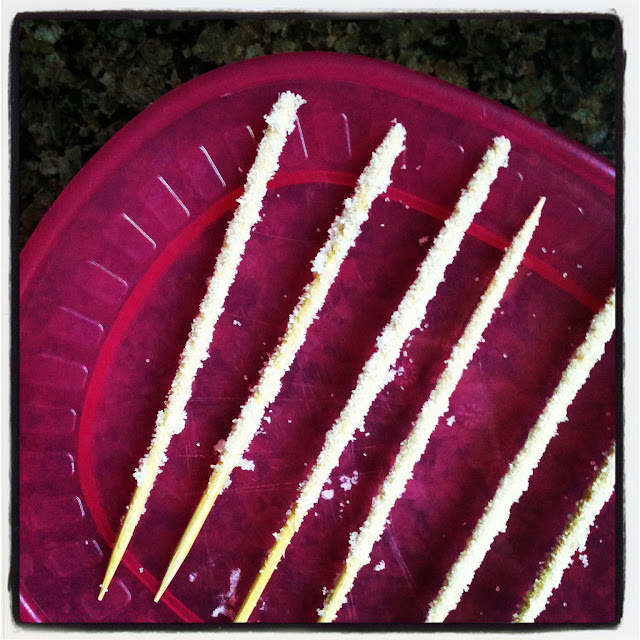 I also did a little more research since I saw that some people had some trouble with it working.  One post recommended putting the sticks an inch above the bottom of the glass to avoid having the glass itself get crystalized.  It did anyway, but it's easy to wash afterwards because the hot water dissolves the sugar. 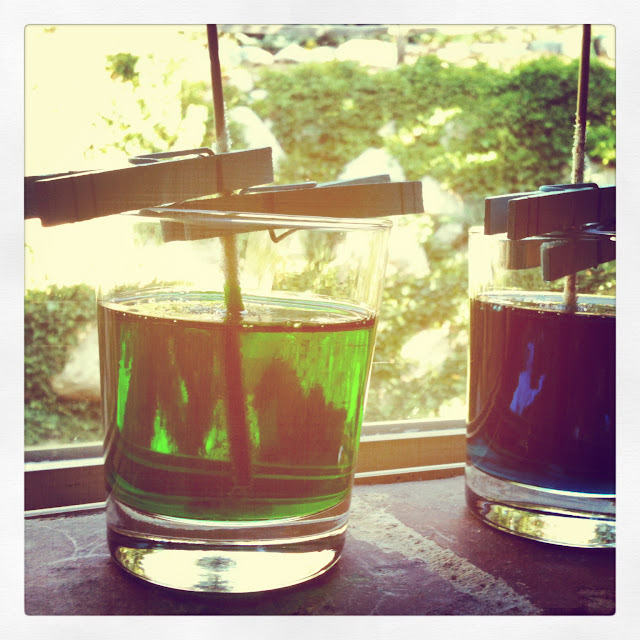 One post I found recommended covering the jars lightly with saran wrap.  I was worried that because the top of liquid got hard that it wasn't working, but it actually was.  You could see the sticks accumulate more crystals throughout the week.  You can't really see that from this picture, though. 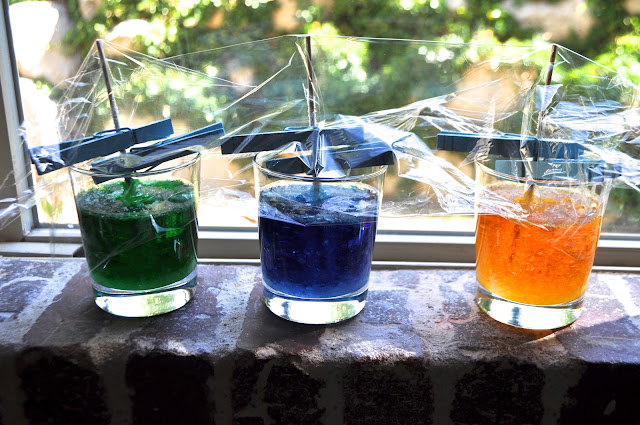 After a week we broke through the top layer and pulled out the rock candy. 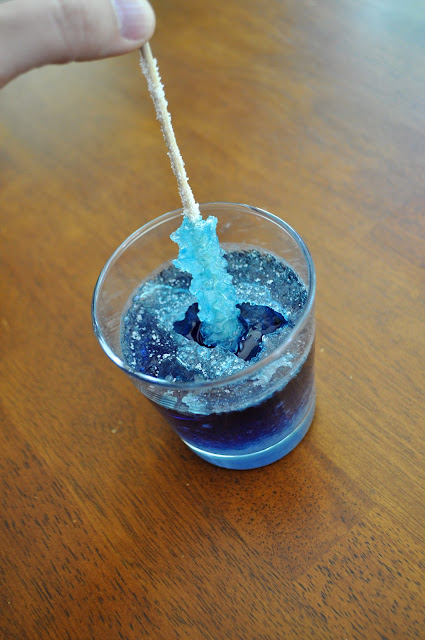 The color fades a lot from the original color. 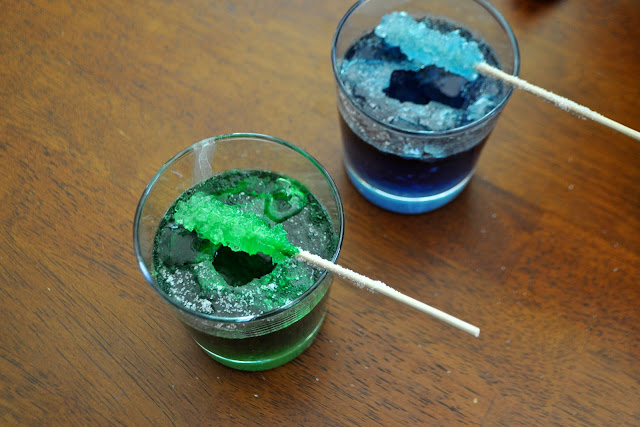 The boys were super excited to pull out the candy after watching it all week.  It was an exercise in patience for them.  (Just ignore that lunch hadn't been wiped off Baden's face yet in this picture :) 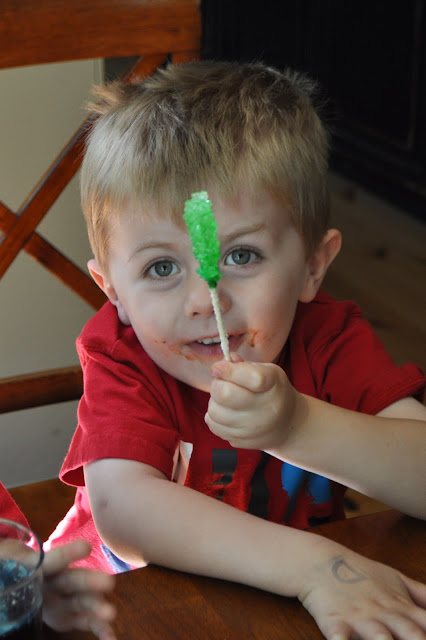 And my little ham Rex was amazed as well. 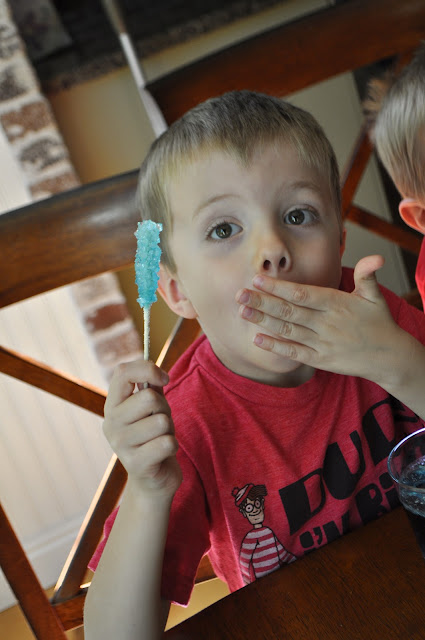 If you want to try your own, you can find Heidi's tutorial HERE.

- Can't find the original source of an image?  Susan just showed me how, directing me to THIS POST.  Awesome.

- I don't have a serger, but if you do and you want some tips, Palak just did an awesome series HERE on using a serger.
Pin It
Email ThisBlogThis!Share to TwitterShare to FacebookShare to Pinterest
by iammommahearmeroar at 6:00 AM

Just to let you know...still loving the next button. There is also a subscribe button. My blog reading life has just gotten easier and you will get credit for each post.

I remember doing this as a kid with my mom! Something cool you can do along the same lines for winter is make snowflake crystals. You use Borax and pipe cleaners in the shape of a snowflake and it grows crystals--they turn out really pretty!

Another fun activity I remember doing with crystals is growing them on charcoal briquets using bluing.

Thanks so much for the shout out Cheri!

I wanted to second what gccmom said. Thank you for sharing the next button feature. My blog reading has never been easier. :-)

We did this for science camp (just brought them after I had made them the week before) and some of ours worked awesome and some not. Glad to see a better tutorial for when I try again if I do!

same here- its been one day of blog reading with the next button, and i love it. and so glad it benefits you (and all the other bloggers) too!

Yay, I'm so glad that it worked out for you guys! Rex's sweet little face is priceless lol! My boys were actually just talking about doing this again too. Thanks for sharing! :)

Does Rex' shirt say "Dude, I'm right here!" Hahahaha! Thanks for sharing the survey results. I'm excited for what you have ahead.

Awesome! I'm going to try this Monday with my kids. They are out of school and we need a project! Thanks for sharing!

Thank you for sharing this and information about google reader...I am a very new baby blogger, and I had no idea. I use google reader all.the.time. Glad you shared. I always love ur ideas. (:

That's cool that it worked!! We tried it this summer, and it didn't work out. I didn't cover it with the Saran wrap, but it got kinda gross and weird-stinky..

Thank you Thank you for the tip about the serger!! I just got mine a week ago and I'm still trying to figure things out. This just answered SO many questions I had!!

Don't try this if you have an ant problem...don't ask me how I know ;)