You might have seen the glitter slime that I linked up at the water cooler last week.  You can find it HERE at 36th Avenue.  Well, Rex had a friend over so I whipped out the stuff to make the slime, attempting to be a cool mom :) 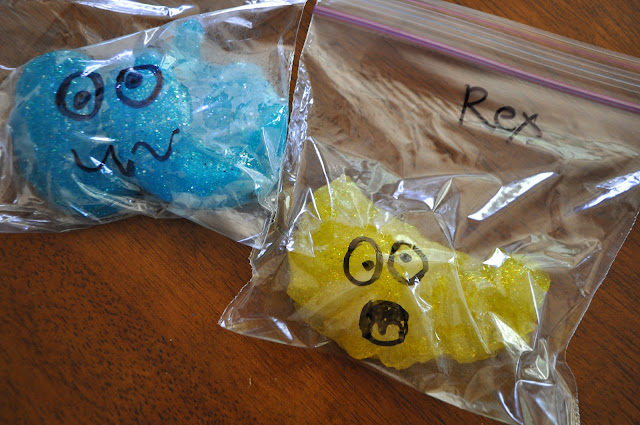 I initially had a lot of trouble finding Borax.  I went to Wal-mart, Home Depot, Walgreens, Smith's (a grocery store), and ShopKo.  No luck.  Then I called Target before going there.  They had it.  Why didn't I go there first?  Duh!  I go there more than any other store. 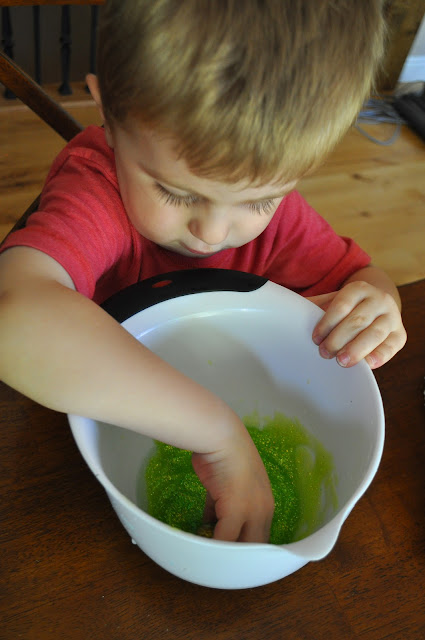 After mixing up the slime it's kind of hard to get it off the kids' hands.  After the slime is mixed then it's fine and won't be too sticky, but getting it off after the initial mixing took some scrubbing.


Rex and his friend thought it was awesome.  I did win the cool mom award.  Yes!

Baden, however, couldn't handle the slime.  He's funny that way. 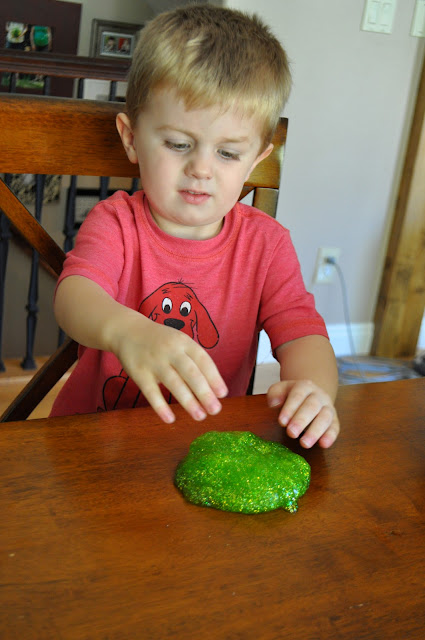 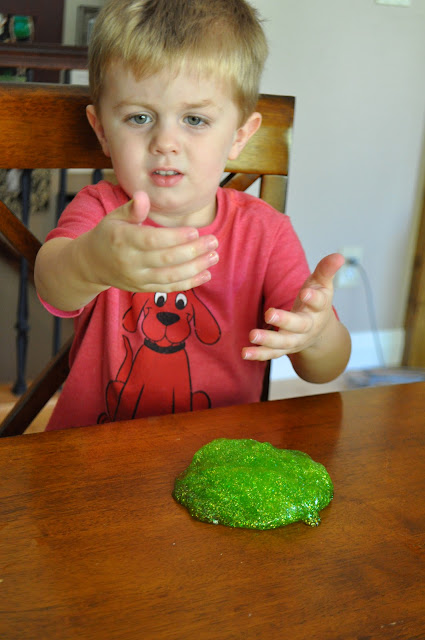 We let Rex's friend take his slime home with him.  I'm sure his mom was grateful :)

So, if you want to make some glitter slime just head over to 36th Avenue HERE.

Thanks for sharing your fun tutorial with us, Desirée.
Pin It
Email ThisBlogThis!Share to TwitterShare to FacebookShare to Pinterest
by iammommahearmeroar at 6:00 AM

Borax (and washing soda and other "old timey" cleaners) are hardware store items where we live. I couldn't find washing soda or fels-naphtha ANYWHERE when I was on a homemade detergent kick until I finally thought to hit up the hardware store. They also have the best spray paint color selection around. That place was my husband's best kept secret, but no more! :)

I've found Borax at my local Walmart and Fred Meyer in the laundry isle.

Love this! Thank you so much for sharing. ~ Tasha

Super cool! I've got some Borax...my boys would love to do this today :)

It's gak! please tell me that someone else remembers gak!

Weird that it was so hard to find the Borax. With the rise of people making their own laundry detergents, all the Walmarts and moat of the grocery stores I've shopped at (in two states) have carried it in the laundry aisle.

I remember gak -- and LOVED it!

My 2 yo would not be impressed by the mess either! He started screaming the other day because his cupcake "is getting me!" As in, he got frosting on his hands.

I don't blame them though..I don't like my hands dirty either!

The slime sure is pretty though, and I bet it still feels cool through the bag.

Super cool. And I love the faces you drew on the bags. :)

Yeah Borax is usually at Walmart. But there is usually only one slot on the shelf for it and it is at the very top or very bottom of the shelves and normally on the opposite side of the aisle from the brand name laundry soaps. So it can be a tough find. Plus, I think they rotate through their borax stock slowly because most of the time the stock boys have no idea what I'm talking about when I have to ask for it at a new store. All kinds of fun things you can do with it though. I think we made rubber balls out of Borax and glue once. Your boys would like that, there's a recipe online I'm sure. Have fun! LT

I've made plain ol' slime before, and my son would LOVE the glitter version. Since you have to buy a 95 lb box (I kid) of borax, I have PLENTY from my last batch to give this a shot. I also LOVE hopping to other blogs that you mention in your posts, because I find all kinds of other cool stuff to create! Have a great one!

So where did you find the glitter glue? I figured that would be the harder task.

I found the glue at Wal-mart. I'm pretty sure it's at Target as well.