Halloween Costumes over the years

So it's time to plan the Halloween costumes for this year.  The problem is, they keep changing their minds. I thought it would be fun to share our costumes through the years and then tell you what we're planning this year.

Here's Rex when he was one.  My mom sewed him this Elvis costume and we bedazzled it.  We sprayed his hair black and drew in side burns with eye liner.  This still might be my favorite. 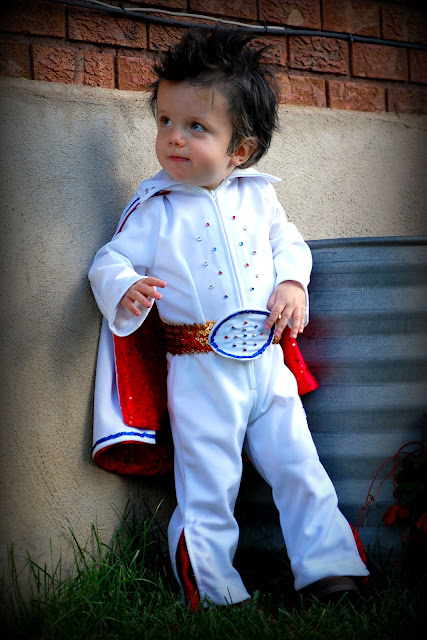 The next year we did fries and a hot dog.  I bought both costumes.  The french fries were from Pottery Barn, but I found them way cheaper on eBay.  The hotdog was an old one from Old Navy. 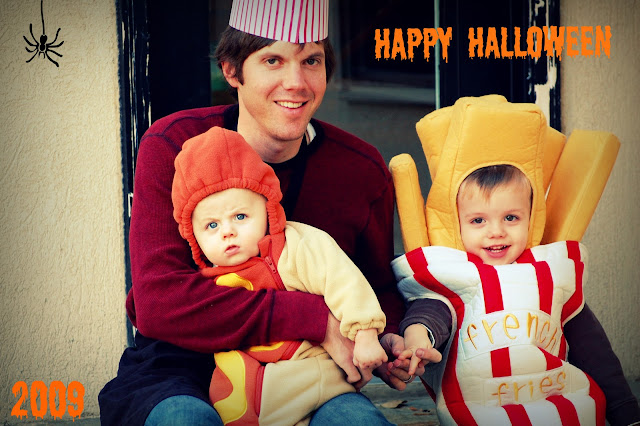 The next year Rex was dying over the Wolverine costume at Target, so I had to give in.  It had claws and I couldn't compete with that.  Baden wore a hand-me-down skunk costume because the gnome one I bought was way too small to squeeze him into. 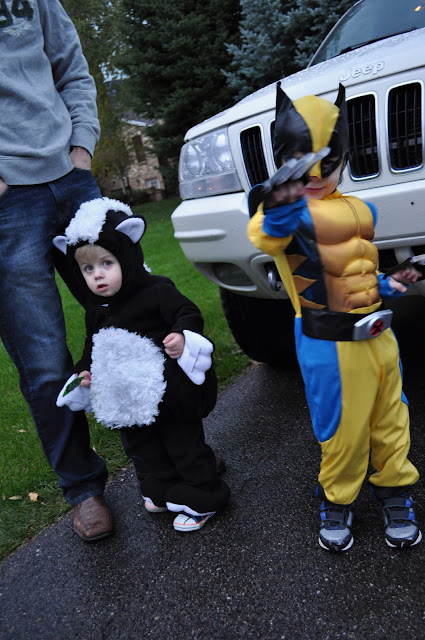 Last year you might recall that Rex was Thor (which you can see the creation of HERE). 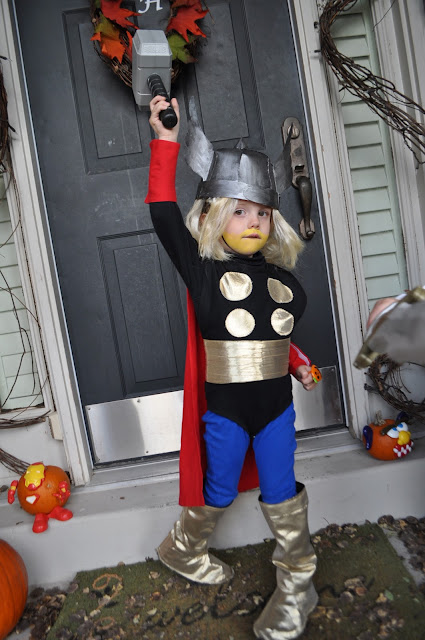 Baden was a viking (which you can find the tutorial for HERE). 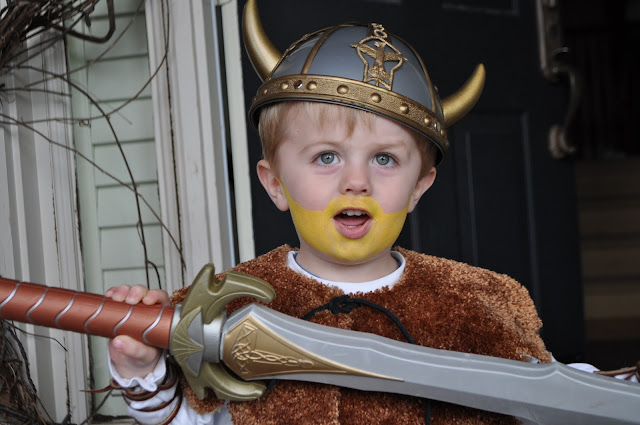 It's always fun when you can convince them to coordinate. 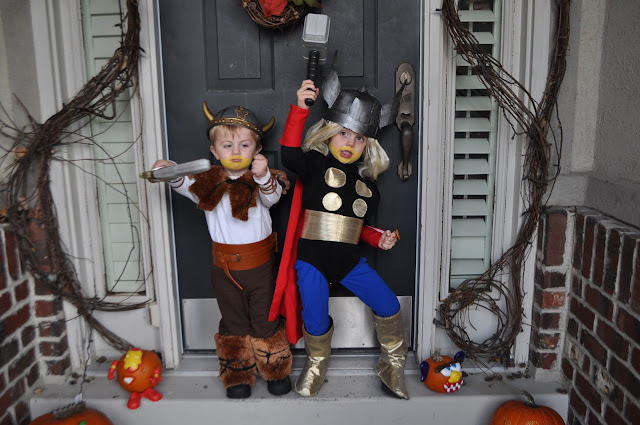 So what's coming this year?  Baden's debating between a sheep, kind of like this... 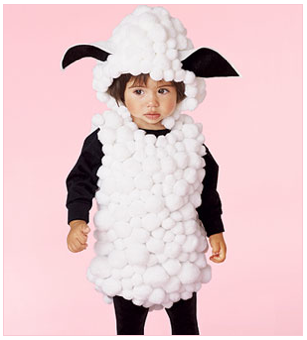 ...and the fry costume we already have. 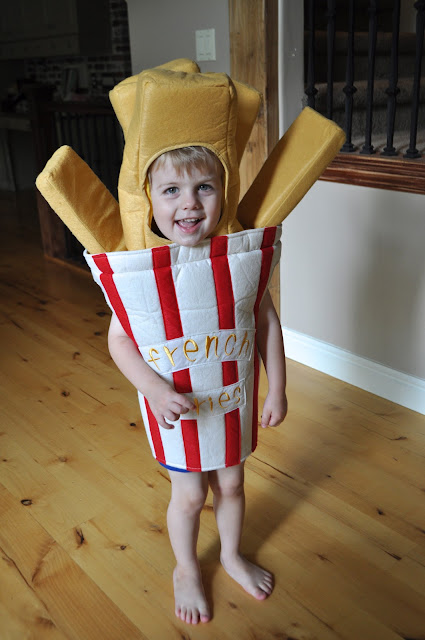 And Rex can't decide between Alvin from Alvin and the Chipmunks (which I already purchased some fabric to make, but I'm not super excited to make).... 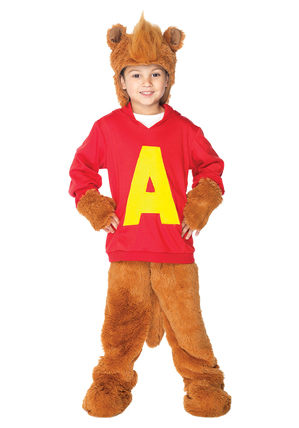 ....and a slurpee.  We'd probably make something similar to what Char did HERE.  It would be easier though, because Rex is still pretty small.  He does have a BIG slurpee obsession, though. 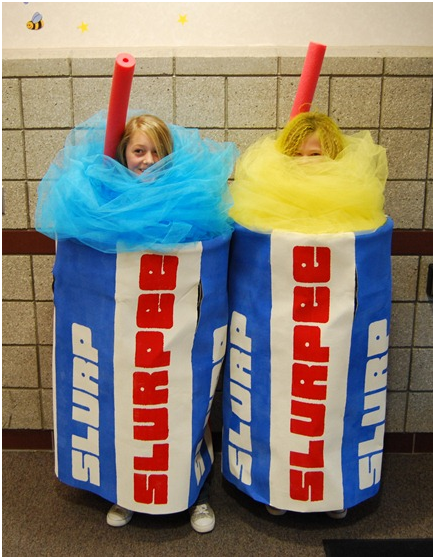 - Catching Fireflies had a fun Halloween costume round up HERE, that including our viking costume.  There's a tooth and tooth fairy one (originally from HERE) that's killing me.  Love it.

- Last week was Project Run and Play's boy week.  See the competition HERE.
Pin It
Email ThisBlogThis!Share to TwitterShare to FacebookShare to Pinterest
by iammommahearmeroar at 6:00 AM

They are too cute in all of them, and y'all ate so creative! Where did you find the gnome costume? That's what I want my almost two year old son to be!

I always wanted my 3 kids to be Alvin and the Chipmunks. I love the SLURPEE, like LOVE, I have a new obsession myself, I mix all the flavors together, so good, its my guilty pleasure.

And my two younger kiddos are going as Daddy and Peppa Pig: http://www.733blog.com/2012/09/peppa-and-daddy-pig-halloween-costume.html

We are also going to Disney World next week and will be attending Mickey's Not-so-scary Halloween Party where parents are encourage to dress up, so my hubby and I will be going as Mr & Mrs Potato Head. :) I'll be sharing the tutorial tomorrow!

That Elvis costume is the best, although your boys look cute in every single one. :)

Love the Elvis one, too! I must say that my daughter was a version of that sheep when she was 7 months old. It was horrible. Maybe I had higher expectations of the person who asked to make the costumer for her. She used pillow stuffing/batting and tufts pulled off easily, which wasn't great for a 7 mo old (not that you'd have that problem). I found an old photo from my blog: LE as a sheep

Oh, and I forgot to mention last year's: she was an owl that I made for her. I was most of the way done before I realized we were going to be at a hotel for Halloween. I did the fitted part (the onesie) after I realized that, so I made it in a way that could easily transfer to a bigger onesie for this year if we decided to have her wear it for real. Here's that costume: LE as an owl

My 2 year old is set on being a "Witchy-poo". I bought fabric yesterday, and *hopefully* will start on it today! I love to dress up too, I'm just not sure what I should be... any suggestions?? :D

I LOVE the Elvis!

We are moving this year and all of my sewing stuff is packed away, but I did manage to put together some no-sew Mary Poppins costumes. :)

We are having a Doc McStuffins (Lucy) and a giraffe (Grant). I made a pink skirt for Doc's outfit while my MIL is making a doctor's coat. The giraffe is a hand-me-down from Lucy's second year. They will be a great pair, but won't top last year's Princess Tiana and the frog!

I love Elvis! We are planning on being Harry Potter and Hermoine and our baby girl will be Hedwig the owl!

We are going as the Phineas and Ferb Family. I'm surprised that one of my boys is willing to wear purple pants.

Love this post!! how fun seeing the costumes over the last few years! my son is going to be Kermit!! can't wait to start sewing... or maybe i can because i bought the fabric 2 weeks ago and still haven't started it :)

My kidlet was given a genuine tigger onesie and hat from the disney store when he was born. They planned the sizing so well that it will fit around halloween. I found some cheap 5 dollar pants from target that match, and we'll be set. Perfect for a comfy 5 month old. I can't wait til we can do real costumes though! :)

I'm still waffling too-- and I don't want to do much or spend a lot of time on it! I posted some cheap and easy ideas on my blog:

Adorable. I need to do a round up of Halloweens past!

Last year I was a crayon and my son was a ninja. He wants to be a Ninja again, but this year we have a hand-me-down Ninja costume that is MUCH cooler than the one Mommy made.
http://bethstherapy.blogspot.com/2011/11/halloween-costumes.html

Adorable! That will be so fun!!

We will be having a Luigi, a Captain America and a dalmation puppy. Any ideas on how to do the Luigi one? I'm having a hard time finding a resonably priced pre made one.

I am pretty much finished with one Captain Hook and half way done with a fru-fru tinkerbell. 2nd Halloween with both the boy and girl and I LOVE to coordinate them. Last year they were Luke & Leia - it will be hard to ever top that. Baby Leia was to die for :)

my 3-1/2 yr old is going to be a robot. he's obsessed with robots!
the plan was to make it with boxes, but a local deal came up and I got a (used) fuzzy warm old navy robot costume for under $6 so, we'll be happy with that!

I just saw that HGTV pinned your viking costume, then I came to your site and here you are talking about it! I have to say, that one is probably my favorite. I'm not sure what we are going as this year. My kids keep "and then-ing". (You know, I want to be a vampire zombie cheerleader who is a dancer as her day job) We'll have to see what happens. I like coordinating costumes too, but my kids are way too cool for that now. I need a little one again so I can force them to be whatever I want. :)

It was from Target. I think they still have it online, but if you buy it you should buy it 1-2 sizes larger than you'd think. It ran so small!

Oh my gosh they are so cute!! Loved the skunk! My kids LOVE Alvin and the Chipmunks {me not so much} and are obsessed with Slurpies!!! Every time Darcy takes them out they expect a slurpie {we've created monsters} arg! Mine are going to be Ironman {Cam} and Spiderman {Isaiah} - homemade - when at preschool and Angry Birds - homemade - when we are all out together as a family... I'm slightly addicted to family halloween costumes :)

I had a Luigi and Mario last year. I found a tutorial for the hats, which is just half a yard of fleece each, and put them in solid colored t shirts and overalls, which they already had. Maybe try Goodwill if you don't have a green shirt overalls? Link for the hat: http://www.groovykidstuff.com/?p=167

We are being the Rubbles-Betty, Barney and Bam Bam. We had to add a pet dinosaur since we have two boys though. This is the first year in quite a few years where I put so much thought in to my costumes and I think it turned out great. I purchased the boys costumes, but have created mine and my husbands.

there is a great tut on smashed peas and carrots...http://smashedpeasandcarrots.blogspot.com/2011/10/how-to-make-mario-and-luigi-costumes.html my son is gonna to be mario with fire power, and my daughter is going to be tinkerbell

I DID IT I DID IT I DID IT!!!!!!!! I will upload photos soon... but with a lot of inspiration from your blog I DID IT! It isn't perfect, but it came together great! I even made a skirt to go with it. I'm feeling so giddy excited right now! My daughter LOVES it too. Pics to follow soon (napping now then school party tonight).