This week was a little crazy around here.  We thought Rex had chicken pox for a couple of days, but then the doctor confirmed that it wasn't.  Whew!  I had heard that people occasionally get them even thought they've had the vaccine and they spread just like they do.  After finding out what was wrong it was a relief and he got to go back to school.  He insisted on wearing these glasses grandma gave him at the doctor's office. 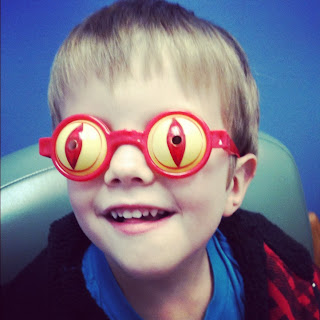 We finally had our Bagster picked up after filling it to the brim with the torn out bathroom.  It was pretty cool to watch. 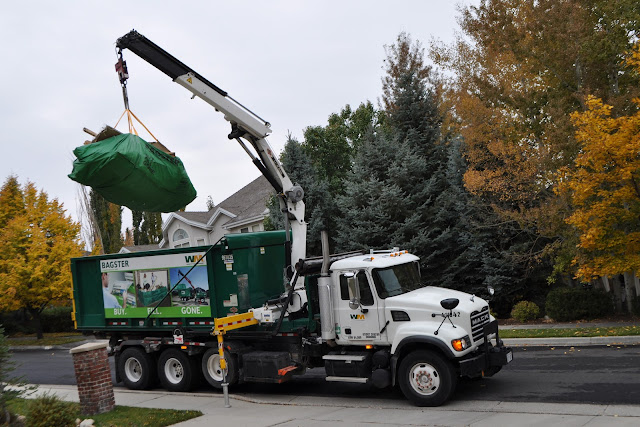 The boys watched the whole process very seriously.  They were impressed, to say the least. 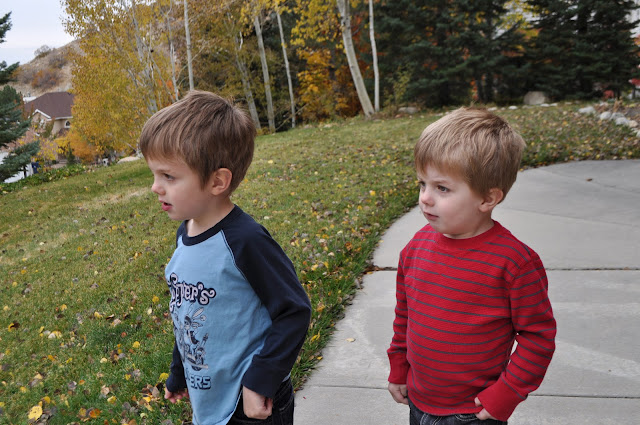 My husband was out of town most of the week, so one night we went to a playland.  There's a really big slide, but the first step to climb up to it is really high.  Baden couldn't quite jump up to it.  The kid doesn't really get air :)  I suggested an idea and they went for it.  Rex curled up into a ball and made himself into a step stool for Baden.  It worked and they raced up to the top about 87 times that way.  It made me laugh.  I love it when they team up. 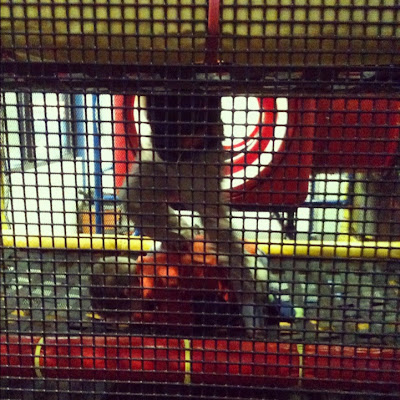 On the last night their dad was gone I let them sleep in my bed with me.  They were so excited.  It was great for memory making, bad for sleep. 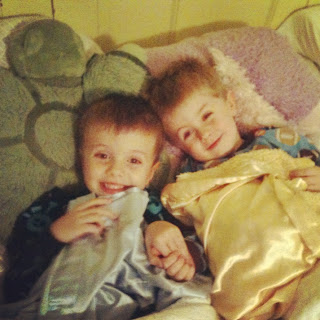 I am grateful for the little moments that make life fun.  I am also thankful for a supportive family who helped me out a whole lot this week.

Awww... this is so cute. It's great to do some 'great for memories, bad for sleep' stuff sometimes.

some of my favorite memories were of sleeping in my moms bed when my dad was gone hunting elk in the winter. i let my little girl in our bed now when her dads out of town for that same reason. such sweet memories, those slumber parties with mom.

I just love your blog. Thanks for being a positive place on the internet! I have bagster envy. I'm wondering HOW we could use it!?!?!? Love the last picture- they're holding hands! :) Baden is getting so big...not a baby anymore and looking more like a little boy! Have a great week!

hehe cool, I love how boys love trucks. Or kids I guess, my girls do get excited over big trucks too! If you ever come visit me I promise your boys can have a ride in my hubby's crane truck ;)

My husband is travelling every week at the moment so we are having lots of mummy slumber parties too! Like you said, good for memories but bad for sleep! ha ha. I love being able to snuggle my not so little babies again though (they are 10 and 7)!

What fun. We are hunkering down waiting for the wrath of Hurricane Sandy. We too are going to be making some fun memories....I hope. LOVE the pics of your boys. They are such cuties.


I feel so good to read your article of iammommahearmeroar.com.It is very helpful in using social media sites. Because here included so effective information. It may help me about related matter. I highly recommend it & like to share Some people have bad opinions about trucks provided on community selling at Auction for trucks, considering that many of the models on community auction are already poorly broken and with comprehensive problems. While this can be real, not all models were poorly managed and irresponsibly used by their past entrepreneurs. Actually, there are some Auction for trucks that are a little bit used with low usage, and they look like product new; they are also in ideal operating situation, yet they are still respected at very low costs.


Thank You Very Much For a Nice & Cool Article.