I spent a good portion of this week under the weather.  Motherhood is always a lot harder when you're not feeling well.  The other day when I was having a hard time Rex decided to make his own roads on the wood like we did for Mommy school a while ago.  (Don't worry.  It didn't damage the floor.) 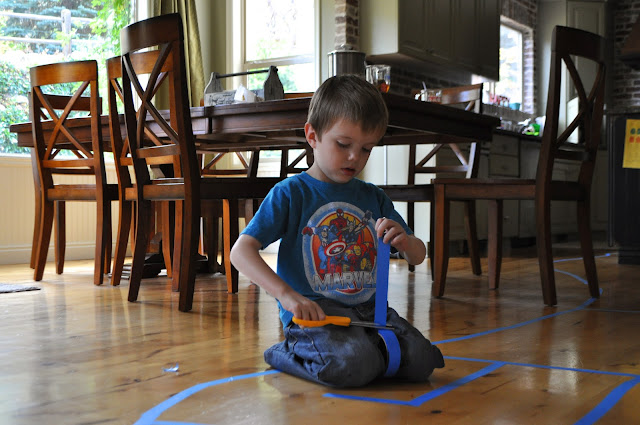 Every once in a while he finds himself a project and goes for it.  Well, it couldn't have come at a better time.  He taped roads all over the kitchen for well over an hour and Baden followed him around just watching.  It makes me so happy to see him enjoy a project (because I can relate) and I love those moments when the boys get along so well together.  He even made Baden his own little track. 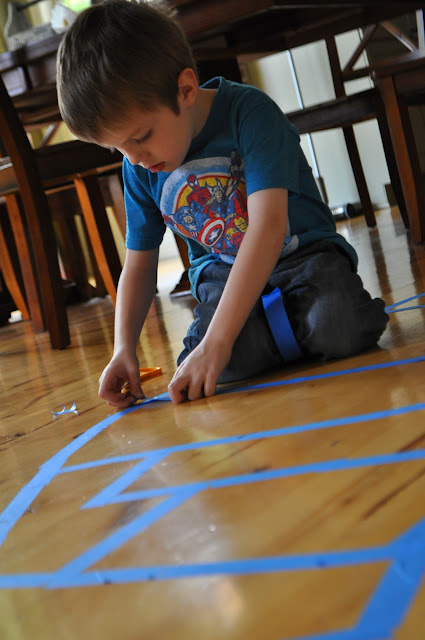 Rex has also started making lists.  He's asking how to spell everything and taking a real interest in writing.  Don't you think he nailed all the important items for our grocery list? 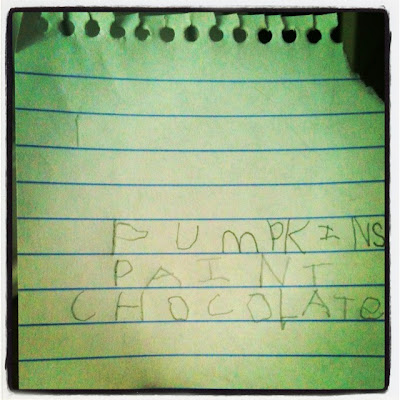 Now that it's autumn it's the perfect time to whip out herbal tea.  Rex would only join me if I said it wasn't a tea party.  He's not a fan of anything "girly."  It's kind of fun being the only girl he likes because that won't last too long :) 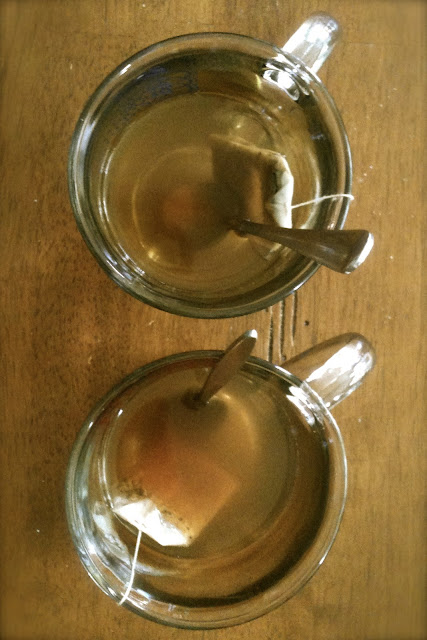 I'm excited about curtain week and about finishing Rex's costume.  Baden will be using Rex's Thor costume from last year, so he's set.  I can't wait to see them all dressed up together.

What are you looking forward to?

I'm so glad to hear that you are feeling a bit better! Can't wait to see Rex's costume!

Yes I agree with with Talia. Please post a DIY of Loki. Glad that you are feeling better too! :0)

I agree on them entertaining themselves! So lovely & fun! And the list....that is priceless :) Glad you are feeling better....when momma is down....everything shuts down!

I love kids handwriting, don't know why but it is one of my favorite fonts. Hope you feel better soon Cheri.

I'm sorry you were sick. No fun at all. Please do share what herbal tea you enjoy! I love a good hot bevi but my choices are very limited. ;)

Love the tape idea! We haven't tried that one before. Hope you feel better soon.
Sandy

We have a couple grocery lists written by my niece that we treasure. She did not ask for spelling help and they reflected her own priorities so they really showcase her personality at that age.