I'm not an incredible cook to start with, but on top of that our dinners have been dying a slow death since I've been pregnant.  Evenings are the worst for me and I can barely stand to look at food.  However, I saw this on Pinterest and the source is HERE.  You basically cook canned biscuits in a waffle maker and eat them as waffles.  It looked kind of fun to try and since it was ridiculously easy I gave it a shot. 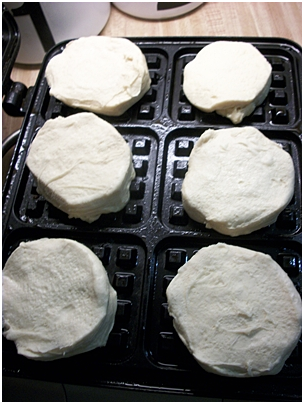 
And?  They were actually really good.  They didn't really taste so much like biscuits once they were covered in syrup, but they had the flakiness and slightly crispy outside of the biscuit.  The boys loved them and even my husband (who's fairly picky selective) liked them. 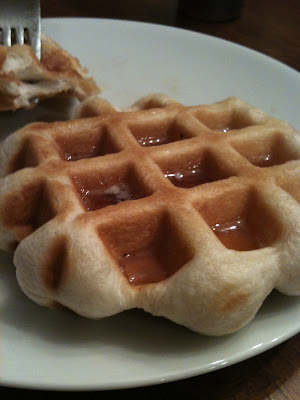 Have you tried any recipes on Pinterest that you love?  Does anyone have a link to a good baked french toast?  It's hard to choose from a lot of pins because you don't always know which one is the best.

Delish! We will have to give it a try! The two recipes that we have found on pintrest and keep coming back to are the No Bake Energy Bites and the Chocolate Chip Cookie Dough Truffles! Happy Friday!

We don't have a waffle maker, boo. But have you ever made donuts with canned biscuits? We call them ghetto donuts, so classy. I serve them hot (i make a glaze with powdered sugar and milk/water, just quick no measurements) and there is always a line for them around the island. These canned biscuits live a lot of lives.

http://www.beantownbaker.com/2010/01/overnight-french-toast.html
This over night french toast recipe is awesome! this blogger has never steered me wrong with a recipe, everything she shares is delicious and i have made dozens of the things she has shared.

we had weird dinners this year too when I was in the first 20 weeks. who knew morning sickness could last so long! i think my saddest dinner i cooked was pierogies and grilled cheese. not a veggie or meat was cooked in the house for over a month. we ordered out a lot. hopefully it passes soon!!

Love this idea! I think we will be having those for dinner!

How clever! I haven't seen these on Pinterest....but look so do-able! Gonna try it soon :) Hang in there momma....this too shall pass.

I tried this too. They were really good the first day but not so good as left-overs. They got incredibly hard and the kids had trouble eating them. Good for a quick breakfast/dinner - just not for making a bunch to have extras on hand.

Smitten Kitchen is one of my two go-tos for recipes. Great every time. Her baked french toast is on my list of things to make. http://smittenkitchen.com/blog/2012/04/cinnamon-toast-french-toast-cookbook-preview/

My family has been making chocolate waffles from scratch for years and years, but I saw on pinterest to use cake mix batter to make them. Maybe not as indulgent as the original, but so yummy! If you want to make them from scratch, here's the link to my family recipe: http://artsandcrofts.blogspot.com/2012/08/chocolate-waffles-two-ways.html

1. Spray a 9 x 13-inch baking pan with cooking spray. Tear French bread into chunks, or cut into cubes, and evenly place in the pan.

2. In a large bowl, mix together eggs, milk, cream, sugar, and vanilla extract. Pour evenly over bread. Cover pan with saran wrap and store in the refrigerator for several hours or overnight.

3. In a separate bowl, mix together flour, brown sugar, cinnamon, and salt. Add butter pieces and cut into the dry mixture using a fork or your hands. Combine until the mixture resembles sand with a few pea sized chunks. Cover and store mixture in the refrigerator.

4. When you’re ready to bake the French toast, preheat oven to 350 degrees. Remove casserole from refrigerator and sprinkle crumb mixture over the top. Bake for 45-55 minutes, or until the French toast is set and golden brown.

Recipe adapted from The Pionner Woman

I love trying out recipes from Pinterest! Here's a good baked french toast:
http://thepioneerwoman.com/cooking/2012/08/baked-french-toast/
We've done it a couple of times & love it!

I used canned cinnamon rolls and did this same process. Everyone LOVED them. You have to keep your waffle maker fairly greased or else the cinnamon and sugar wil stick hard and you'll end up with a mess, but SO fun.

What a cool idea! I'm going to have to get a waffle maker now. :)

My momma has a good baked French Toast recipe. Let's be honest though, everything she makes is good. :)

Making them with cinnamon rolls is amazing!

Gosh I understand the pregnancy and the dieing of meals. My husband had to make dinner often. Now that my 3rd boy is 11 weeks I´m getting better again. If you are craving sweets and wand a healthy chocolate chip cookie try this recipe. I made them today.

Full of the nutrition your body needs while pregnant like folic acid and omega 3s.Also full of fiber if you are having stomach issues. I often double the peanut butter and the flax seeds and wheat germ for an extra healthy cookie.

The waffle iron is my quick dinner friend...muffin mix, french toast, grilled cheese, cinnamon rolls...presto! I even make chocolate waffles with cake mix one in awhile for a fast dessert.

Where did you get your waffle maker? I like the six squares.

So sorry you have morning sickness! I just went through a horrid 4 month spell of that myself and am glad it finally passed! When I was sick I think the only thing I cooked once or twice was this recipe for german pancakes http://lightlycrunchy.wordpress.com/2012/07/24/german-pancake/. My husband cooked the rest of the time while I fled to the other extreme of the house to escape the cooking smells!, but the german pancakes actually went down pretty well and were quite easy to prepare. Hope your morning sickness passes soon!

French Toast waffles are the BEST! I have picky eaters too and we eat this a lot in our house... Basically you can fix any french toast recipe and cook them in the waffle maker. SO easy and good. We found that it is best to use better denser bread than regular sandwich bread.

Here is the recipe http://www.runnersworld.com/recipes/french-toast-waffles-delicious-worlds-collide

Also, we have tried the canned cinnamon rolls in the waffle maker from interest and they are awesome too!

I like this one:
http://www.the-girl-who-ate-everything.com/2011/03/overnight-french-toast-casserole.html
I also add more pecans/brown sugar/butter on top and also spread some softened cream cheese on the bread (so it's like a cinnamon roll with cream cheese frosting).

very cool Cherie! I used to like spending lots of time in the kitchen but having a baby makes that kind of work frustrating sometimes. I am totally doing this! Thanks for sharing.

I hope you are well. I'm miss your sweet post. Sending hugs your way.

Search for "toffee crack" on Pinterest, then make it immediately!! So simple and delicious!