Clothes for the Birthday Boy

So it finally happened.  Baden turned four.  If I weren't having a baby soon I might bawl my head off about it.  He's been such a fun and easy boy that it makes it so hard to see him grow up.  I want him to be my little 3-year-old sidekick forever. 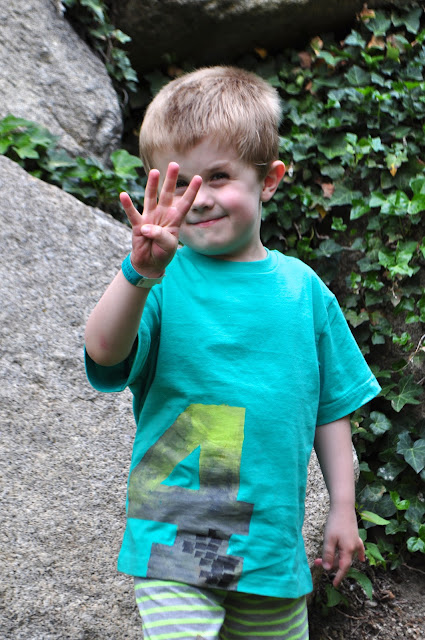 It's an easy way to let your child do it all by himself.  I only smoothed out the paint a little when he was done so there weren't any bumps.  He loved painting it. 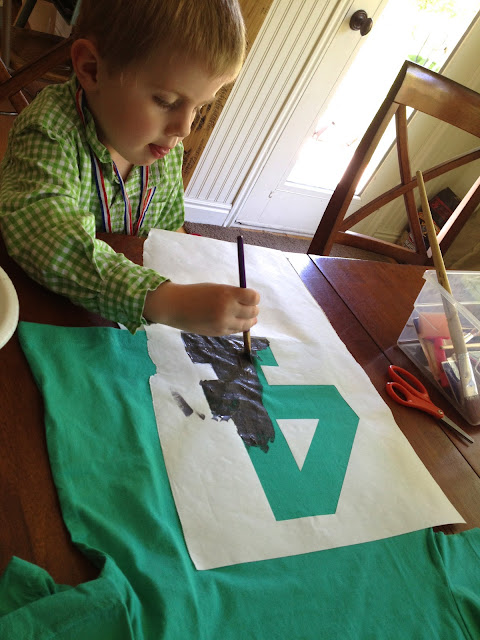 I also sewed up some shorts to match.  They are just like the ones I made from my husband's old t-shirt HERE.  (He happens to have them hiked up kind of high here, but I made them to cover his knees.) 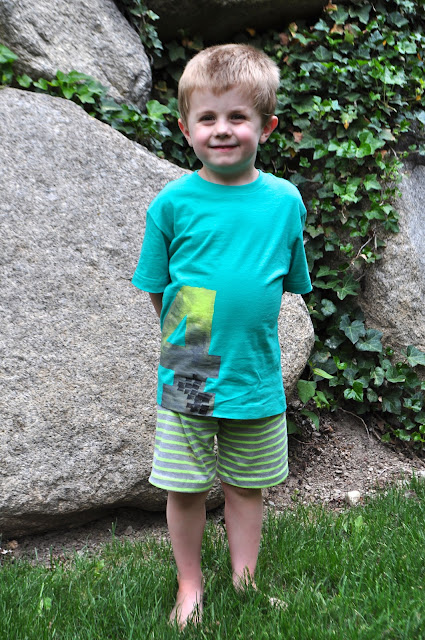 And my labels finally arrived!  I was so excited to put a little "ROAR" tag on the back of the shirt for him.  If you want to know more about where I got them, I totally followed my friend Christie's lead and ordered the same.  You can read about them on her blog HERE.  (She also happens to be having a baby girl on the same day as me.  I love Christie.)

(Another random sidenote: My boys both get ducktails.  This is only after like 2 weeks of my cutting their hair straight across the back.  It grows into the 80's tail right away.  Too bad we're not in the 80's anymore.  Anyone else have boys with that?) 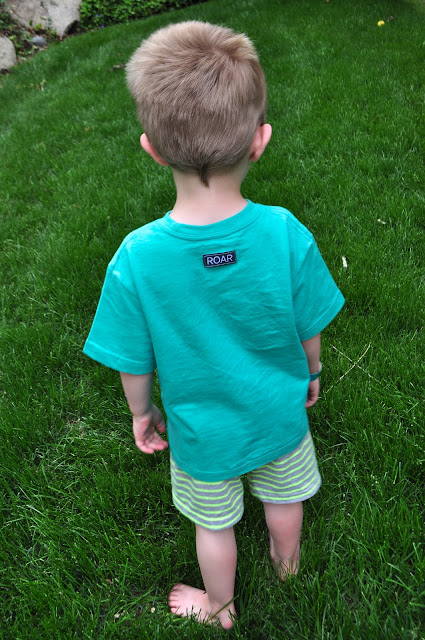 Bade also has a serious obsession with rubber duckies.  So, I made this shirt for him, by doing a freezer paper stencil.  (Click HERE for that video tutorial.)  The googley eye is a sew on one that I bought years ago at Hobby Lobby.  I'm sure they still carry them. 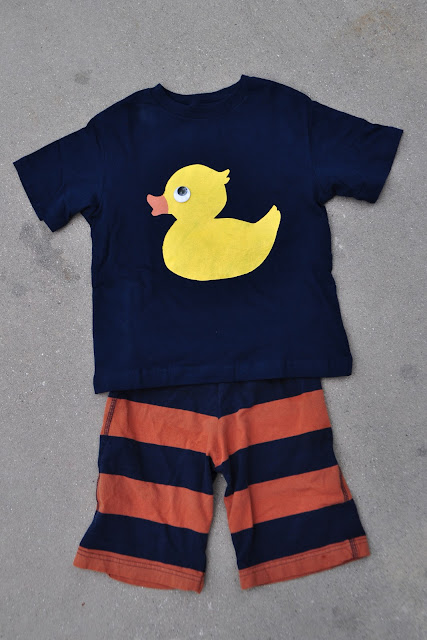 We celebrated his birthday yesterday and took him to Build a Bear.  He insisted on wearing his galoshes and party hat.  Even though he's pretty shy, he liked the idea of people knowing it was his birthday. 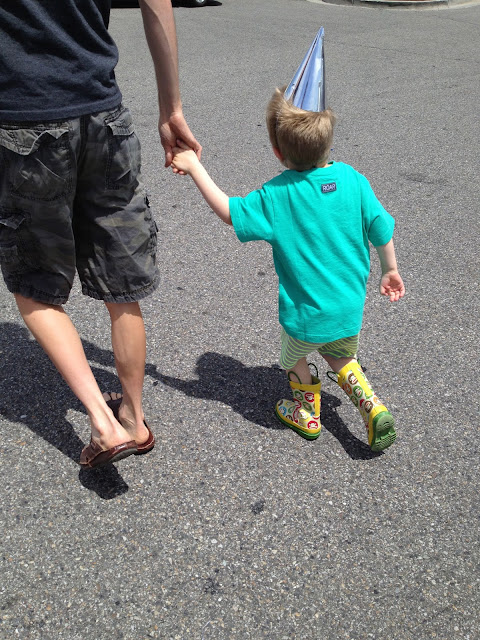 We made exceptions for his birthday regarding the healthy stuff and we baked a really delicious cake.  It was a great day. 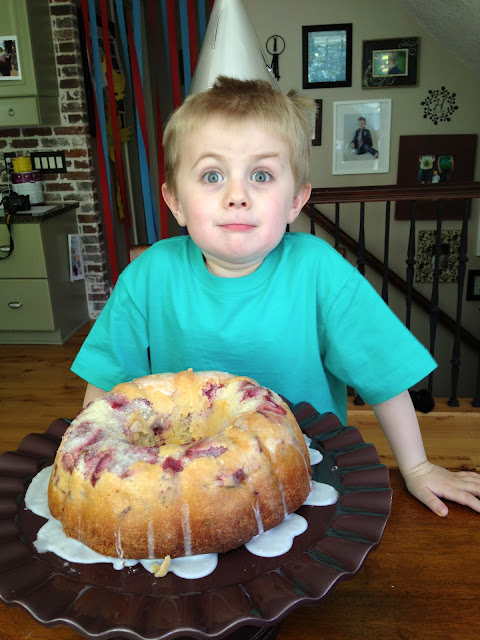 Hard to believe how fast four years has flown by. 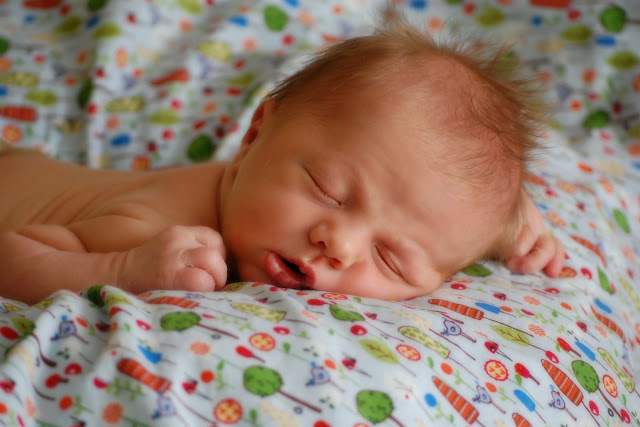 Oh, I love this boy.

Happy Birthday Baden! And Happy Birthing Day to you Momma.

Happy Happy Birthday to Baden!!! What a special day - four year olds are particularly awesome too I think. I'm struggling too - my little man will be three in a few weeks and I'm STILL kind of in shock about how it's been THAT LONG. Crazy.

Have a great day celebrating that boy!

Happy birthday Baden! I can't believe he is already four. That cake looks amazing and I love the shirts!

Happy birthday Baden! Sounds like he had a blast. I love those number shirts.

Love the galoshes! And my three year old gets the duck tail super fast too. Yay for birthdays! My daughters is tomorrow and I'm due with number three the day after you. Best time ever to have kiddos. :)

Happy Birthday Baden! What an adorable little guy. LOVE the shirts and shorts you made him. You rock!

Happy Birthday Baden! I can't believe he is 4 already! I need to sew up some quick shorts this week-we keep running out- especially since we play in the water daily around here while I water the garden/yard. :) That duck shirt is awesome.

I ran into you guys at the mall! It was so great seeing you in person! Your kids are darling. And you are awesome in person! Happy Birthday Baden.

My son has a serious ducktail too. One time I mentioned it and my friend said, "Oh! I thought you cut his hair like that on purpose!"

I know this is a long shot, but any chance you remember what material Baden is lying on in that baby picture? I love it!

My little girl will be 4 in 1 week and it is making me so sad! She's my only girl...I have a 9, 6, and 8-month-old boys, so my little princess growing up makes me want to cry! Why can't they stay squishy little babies forever?!?

I don't remember the name of the actual fabric, but I'm pretty sure it was by Heidi Grace and I bought it at JoAnn's. Sorry I don't know more than that!

What a sweet post, it is so hard to see them get older, but Bailey being 4 has been my favorite age for her so you have great things to come! And thanks for linking Cheri. You always are so nice to send traffic my way. AHHH!!! We're going to have our baby girls in a week!!!

I started following your blog when he was just a few months old, he is such a cute little man!

Try cutting the duck tail part a clipper length shorter. So if you use a 2 on the back there, use a 1. When I worked in a salon, I had to do that all the time. It was the only thing that made it so the duck tail didn't come back quite so soon. Hope that helps. Good luck!

Hello - I love your blog! Missed it during spring studies. Can you tell me what kind of cake that is, I am partial to bundt cakes and it looks fantastically flavorful. OR better yet a link to the recipe.

Yes! The recipe link is here and it's an amazing cake.

Happy Birthday to your sweetie Baden! He is looking very tall too. I love the Number 4 Shirt and that cake. My boys have duck tails too. Love them, but they definitely grow out better if you taper the neckline rather than square it off.