When you’ve got an awesome dirt bike you know it’s only a short matter of time before you start trying the crazy stunts. Stunts successfully pulled off earn you substantial credit and amazing bragging rights. However, not all crazy stunts go right and end in success. Some go horribly, horribly wrong. With everyone having a GoPro strapped to their helmet or another brand of the helmet cam, you only need to run a quick search to enjoy the endless supply of crazy dirt bike stunts gone wrong and other biking fails. 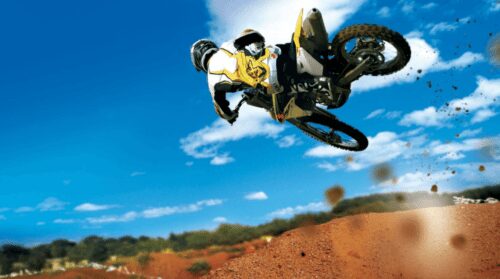 When the parachute fails to open while riding

A biker in Finland decided to tackle an amazing 40-meter jump off of a cliff with a river landing. He expected his ramp to shoot him up 40 meters above the water and figured it would give him enough time to deploy his parachute. Even though the parachute consistently failed to open in practice he still decided to take on the big jump. Running up to the ramp he was winding his way through trees in the forest. When he entered the straightaway he gave his bike full throttle and launched himself into the air. The helmet GoPro reveals the bike sailing away from him, which was exactly as he had planned. However, his parachute failed to open until the last second right as he hit the water barely offering him any stopping power. Miraculously he walked away. However, they did lose the GoPro bike cam into the river.

When the jump fails you and your bike

This crazy do it yourself course creator created his own jumps only he didn’t plan the landing out as carefully as he should have. In the forest with a throttle open he hit his ramp up and flew into the air. As he came down to land on his other mound, the entire bike sank straight into it and he smashed his face into the handlebars. Of course, this highly skilled course engineer wasn’t wearing a helmet in addition to failing to make his landing rat ramp sturdy enough to bear the weight and force of him and his bike landing.

There are hundreds or even thousands of casing compilations for your viewing pleasure on YouTube. And what’s not to love about watching people doing the same thing with their bike that you always fear you’re going to do? The casing can often end up with you having broken bones in your arms or legs. Several of the casing compilations feature broken bones. So if you’re not into extreme graphics stay away from these particular videos.

Extra props go to the guy who was jumping logs of various heights in competition. Trying to clear two stacks of double logs he spectacularly cased the second jump, launching himself into the air and sidelining his bike.

Not so softly ending

When taking jumps with a partner always make sure you have enough space. If you don’t have enough space and you take the jumps at different heights you can end up landing on top of your riding buddy. In one such video showing this, the first person to finish the jump didn’t get much air underneath the tires whereas the second one did. You get to hear him screaming right before he lands on top of his partner and wipes them both out.

If you plan on doing your own stunts, make sure to spend some time browsing YouTube for crazy stunts gone wrong. Take notes and make sure you don’t repeat their mistakes. If you do, make sure to get it on video!