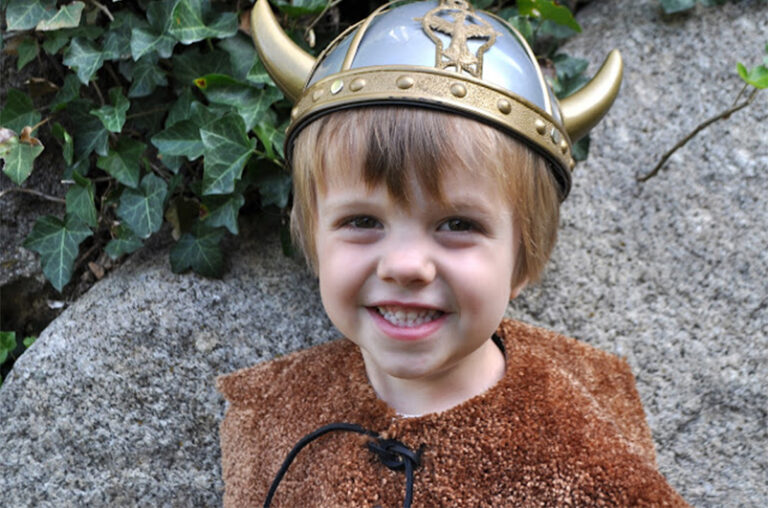 So, as I mentioned, Baden is going to be a Viking for Halloween. I was trying to think of a cheap way to make a costume for him as I roamed through the aisles of Target. They had some sweet faux-fur vests in the girl department that would have been awesome, but they were $25 and I didn’t plan on spending that much on the entire costume.

So I kept roaming until…I found it. There were fluffy toilet seat covers on clearance for $3 and I figured I could cut a hole in the middle and made it a caplet-kind of thing. I was laughing my head off….all by myself as I threw them in the cart. I kind of wanted the cashier to ask me about them so I could announce, “I’m going to make a sweet Viking costume with these babies!” She didn’t ask though 🙂

Toilet seat covers are a funny thing to me. You just can’t hide a toilet. I know they aren’t pretty, but we all need them. It’s not like when you have a cover on your toilet people say, “Wow, how nice! I hardly even noticed there was a toilet in this bathroom!” Okay, I’m on a tangent here. Back to the costume.

So, here’s the completed costume with Rex modeling it, since he was the cooperative one yesterday.

And here’s how it went down. I bought two of the toilet seat covers. 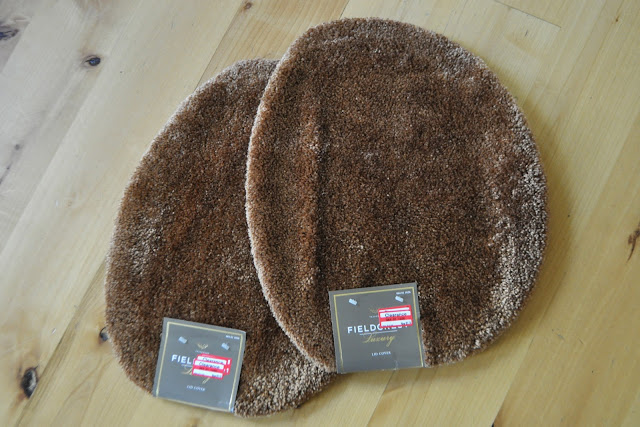 I trimmed off the elastic, leaving me with one large circle. (Trimming these was a bit messy because you get the strings everywhere. See the pile to the right? Yeah, messy.) 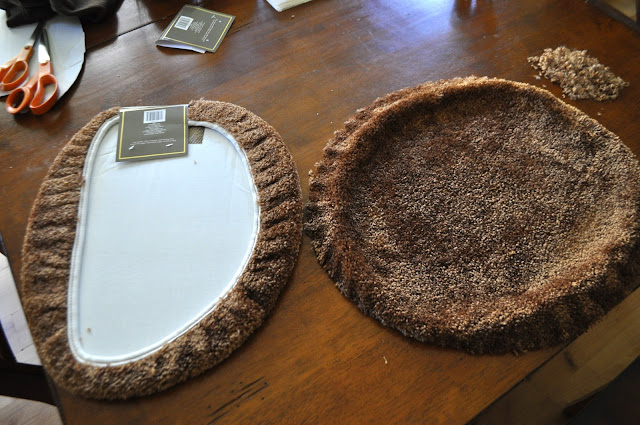 Then I cut out a small circle for his neck and I also cut back some of the entire circle so it would lay right on him. 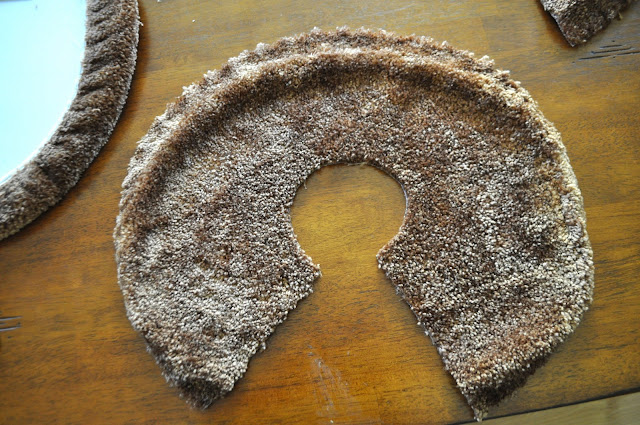 I ended up cutting the edges in a jagged way so it looked rougher. I took a craft knife and made two small slits so I could string my leather lace through it to tie it on. 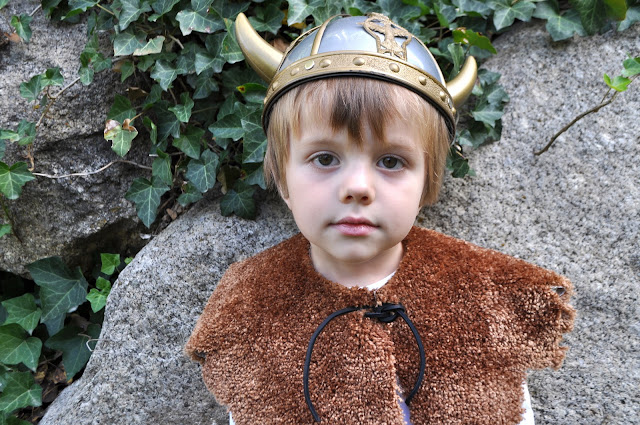 The shirt is just a $3 Walmart tee. I tied the same leather string around his wrists. I already had it on hand from a remnant bag I had purchased a while back. I didn’t want to do anything permanent to the shirt because I wanted to be able to use it later. 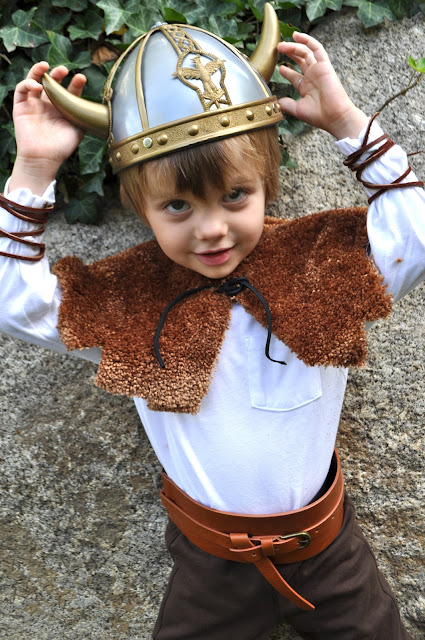 The pants were just brown sweat pants. I also didn’t want to do anything permanent for boots so I took out some snow boots and cut the other toilet cover in half (also trimming off the elastic). 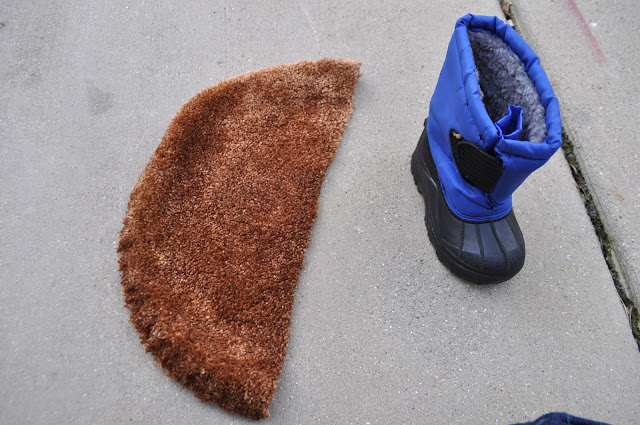 I wrapped the toilet cover around the top of the boot and tied my leather strings around them. 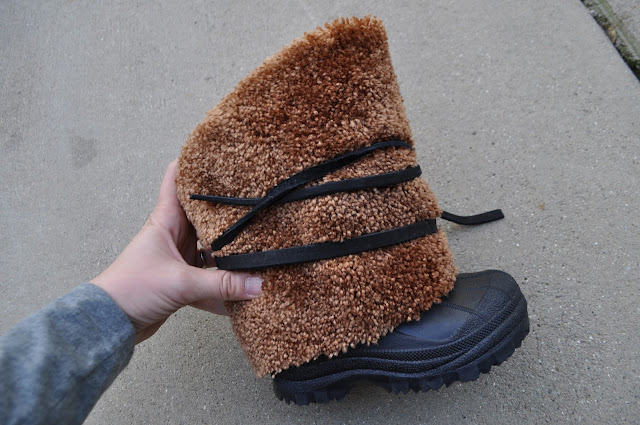 Lastly, I bought the hat at a toy store for $2.

We splurged on the Thor hammer. It’s dense foam (so they can’t really injure one another with it) and the boys think it’s the coolest thing ever. 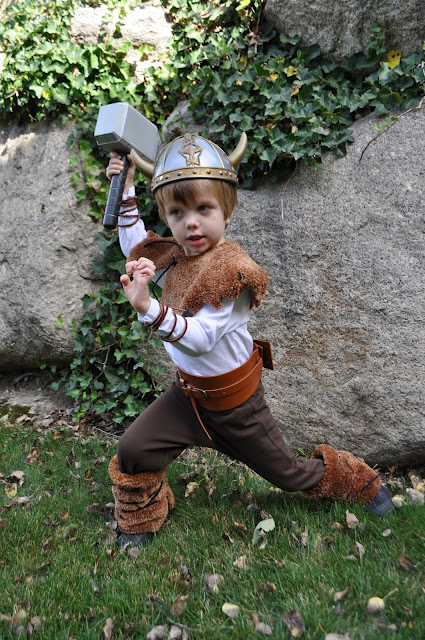 And? There’s one more thing that I won’t do until Halloween night. I’m going to paint a beard on Baden.

And there you have it. I’ve got one rough, tough Viking costume. That way when Baden makes the horrible crusty face everywhere we go thrice or treating, they’ll just think he’s “in character.” Rex might have to teach him some of his poses, too. 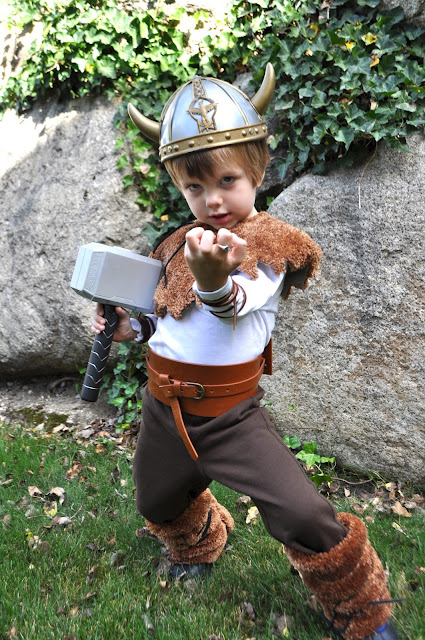 Yeah, you’re afraid. I know. It’s a bit intimidating for me to live in the same house with him 🙂 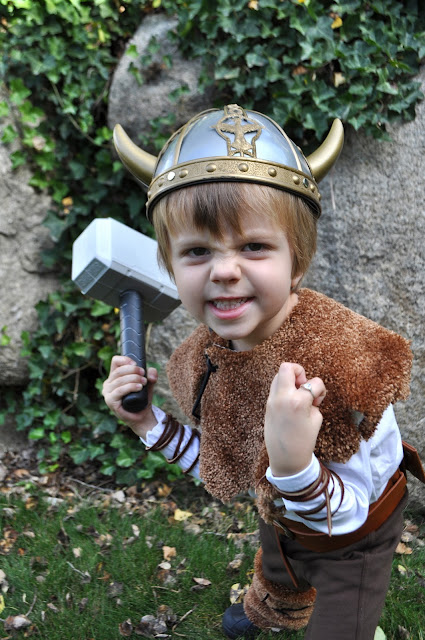 That’s all for today. Thanks for reading.