I have a lot of nephews and nieces.  Twenty-four to be exact.  I'm hoping to eventually make something for each of them, but it's going to take a while.  Anyhow, I have a cool nephew who loves the brand Skullcandy.  He also had a sweatshirt that needed repairing, so I patched the hole, added a logo, and made a t-shirt to go with it (since it's almost summer).
Here's what he's going home with....

...and here's the process.
I used a bleach pen on the shirt first.  (Click HERE for the bleach pen tutorial.)  Unfortunately, the bleach only removed the blue-ish tones and left the gray, so it's not very apparent.  No worries.  It still gave us some texture and interest. 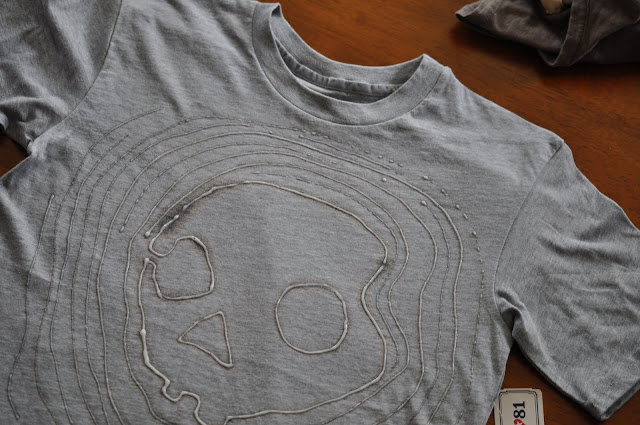 Next I did the skull outline in a messy embroidery.  If you want to try this, stitch around the outline once in a messy way.  Then, go around it one more time, allowing the lines to occasionally cross.  You can still see what the main object is, but it gives the shirt a funky, rock 'n roll look.
If your t-shirt is super thin, you might want to buy some fusible interfacing to iron onto the inside (just to beef the shirt up a little and make it easier to stitch).  I didn't do that, but it would have been easier that way. 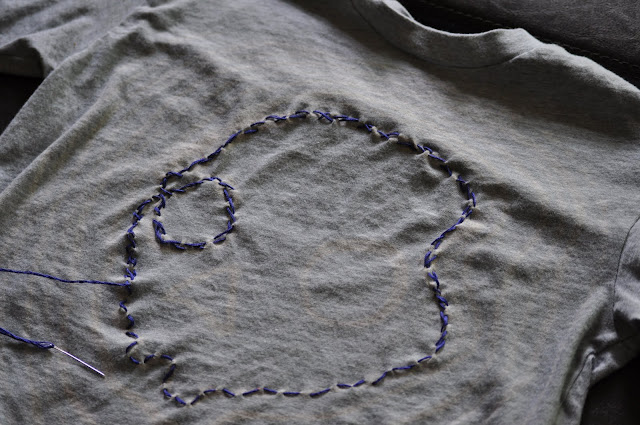 That's all for the shirt.  Now on to the sweatshirt.  It already had a big rip in it.  My 'lil sis gave me the idea to leave part of the hole for his ipod cord.  See?  You put the ipod in the pocket, lace the cord through the hole so it doesn't stick out and then the headphones will come out at the neckline.  Yeah, she's smart and cool.
I patched the hole from the inside with a scrap of fabric and some heat 'n bond.  Then I flossed the area (again for the funky look).  I even flossed around the hole part just to hold everything in place. 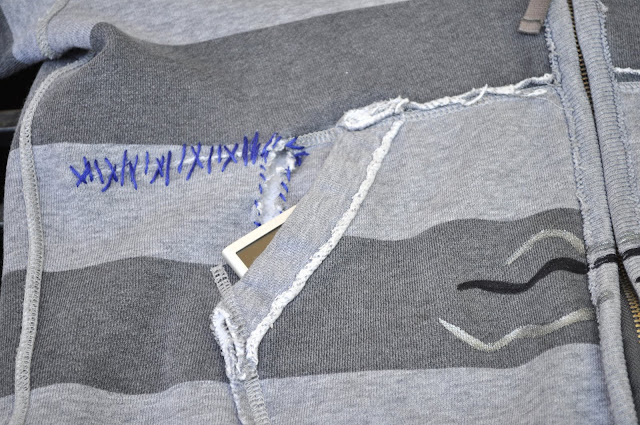 Next I stitched the logo on the pocket and painted the silver fabric paint on.  I didn't bother to create a freezer stencil.  I just had fun with it.  I used a sharpie to add a little more design.  (Fabric markers aren't that great and a sharpie is permanent, too.) 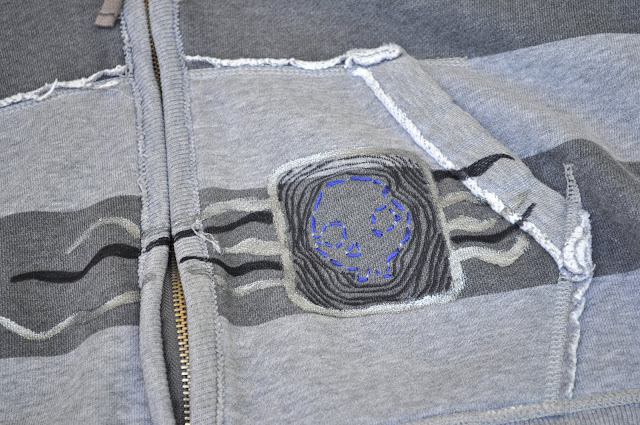 And there you have it......a Skullcandy-inspired outfit for a hip nephew.
Pin It
Email ThisBlogThis!Share to TwitterShare to FacebookShare to Pinterest
by iammommahearmeroar at 6:15 AM

LOVE IT! I never thought of doing something like that.

I think its cool that you have 24 nieces and nephews! I have 23 and by the end of this year I will have 25! how many kids are in your family?
I too would love to make all of them something but it will take a lot of time.

Be careful or he is going to start ripping holes in everything he has just so Aunt Cheri can "fix" it. You are the coolest! I love it.

You are much too creative! That looks like it would take forever, but the shirt is amazing. My son would LOVE it!!!

That shirt is totally rock and roll! I love a good boy craft! :)

I love the bleach pen idea. I have a 9yr old son who tends to take a backseat in the sewing department to his 4yr old sister. I will make him one of those inspired t's soon. Great Job!!