This week we had the chance to try out a new product from Kraft.  (I guess someone out there heard about my secret mac and cheese love.)  It's macaroni and cheese, but with "veggie pasta."  The idea is that it's a sneaky way to get veggies into your child's diet. 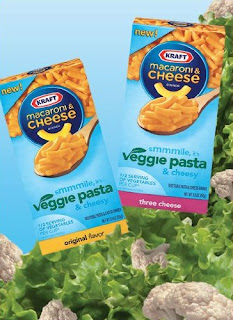 I hired some experienced taste testers to give me their valued opinions.  The taste was a thumbs up.  Both of my boys liked it.  Rex would normally eat veggies anyway, but Baden is extremely picky.  I was excited to sneak the veggies in on him.  The mac and cheese has a 1/2 a serving of veggies (the equivalent of 1/2 cup of cauliflower).  There isn't even a hint of cauliflower in the flavor of the pasta.  You can sense that it's a little heartier, but the flavor isn't any different. 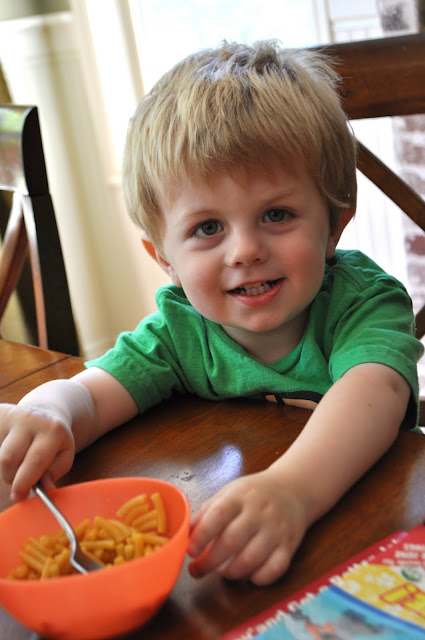 The only con we found was that the box contains a little less than the normal box of mac and cheese (just like the spiral kind). 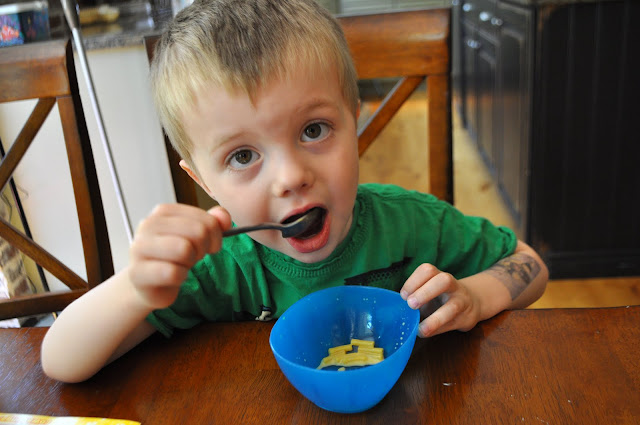 All in all, I think it's a great idea for picky kids.  It's tasty, easy, and fast (just like the original), but it packs a secret veggie weapon that any mom can appreciate.
Thanks for reading.
Pin It
Email ThisBlogThis!Share to TwitterShare to FacebookShare to Pinterest
by iammommahearmeroar at 7:51 AM

I randomly saw this in a store a couple weeks ago and tried it on my SUPER picky just-turned-three year old son-he loved it. He is the hardest kid in the world to feed so I'll be investing in many more boxes! Thanks for the coupon!

We've taken to adding a bag of california vegetables to our velvetta shells and cheese to add some more veg to our kids' diet. Looks like we'll have to try this new pasta to add a bit of oomph. Thanks for the tip!

I tried this a couple weeks ago and I enjoyed it. It was a great way for me to sneak more veggies into MY diet. Thanks for the coupon!

Sneaky sneaky! I love tricking my daughter (and husband) into eating healthy food. And I am thrilled to find a Kraft product thats healthy! I have quite an affinity to Kraft. Now I have a nice excuse. Thanks!

Glad to know this is good! Did you take down the link to the coupon? I saw it on my phone then came to the computer to print it and it was gone. Thanks!

Am I missing something? I see a couple of 'thanks for the coupon' comments but I don't see one!

I just noticed these boxes on the shelf at the store last night - saw the name but didn't have the time to actually see what it was. Thanks for the write up! We've got a house full of Mac-n-cheese lovin' kids so I think this will be in our pantry soon! Thanks!

Yeah, I removed the coupon because you had to install a program on your computer just to use it. It seemed a bit sketchy to me so I took it off. Sorry! You can use the link at your own disgression. Here it is:

Okay, so you've tried their boxed version Cheri, now you have to try this super easy -powder cheese free and just as fast- mac and cheese I did a post on.

I hope that you give this a try and love it.

YUM! I so want to try that.

Looks good, I'll have to try it to sneak some veggies into my diet as well!! Lol.

I haven't tried this yet but the Garden Delight spaghetti by Ronzoni is really good...I think it has carrots and spinach in it.
Another way to sneak veggies into mac n cheese is by adding pureed butternut squash into the sauce (I usually do this with homemade). It makes the sauce more of an orange color kids seem to like and adds an awesome depth to the flavor!

I have a question, is it a 1/2 serving in each serving of pasta, or for the whole box?

Becka - It's a 1/2 a serving of veggies in every serving of mac and cheese.