I have had more craft fails this week than ever.  Really.  I tried to make myself a skirt this week and it was the most unflattering thing I've ever put on.  I spent a couple of hours on it, too.  Bummer.  So, for my second attempt at Feature Friday I opted for a really simple project that I couldn't screw up.

I pinned this cool jar HERE on Pinterest a while ago.  The original source is HERE. 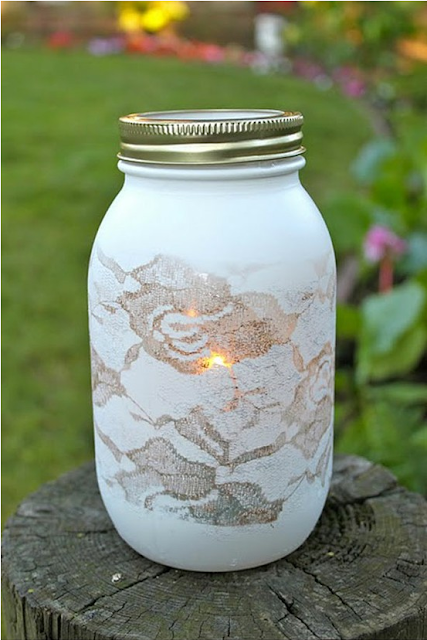 Anyhow, you wrap a mason jar in lace and spray paint it.  Remove the lace and you're done.  You can put a candle in them.  I think I might make a few in different colors and use them for vases for an upcoming baby shower I'm throwing.  They are pretty and easy.  I think they'd be pretty for centerpieces at a wedding as well.  Picture different colors and sizes with candles in them.

Here's a little yellow one I made.  It only took minutes and two coats of spray paint.  Kind of fun.  I didn't put a candle in it and I have stuff in the jar that's kind of showing through, but you get the idea. 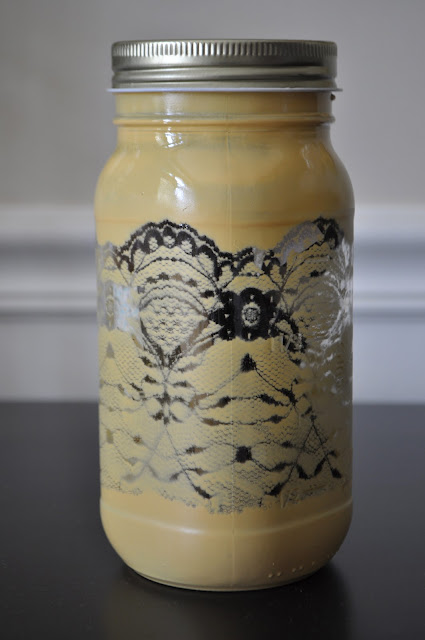 Now I also wanted to give you a heads up about next week.  I have a handful of projects around the house that just aren't really enthralling.  They don't scream fun, but I'm trying to get things in order.  So, I'm calling next week "Git 'er done week."  You're invited to join in, too.  I'm going to tackle all those annoying projects and you can see the befores and afters.  They aren't going to be Pinterest-worthy posts, but I'm pretty sure it'll help me get some important stuff knocked out. 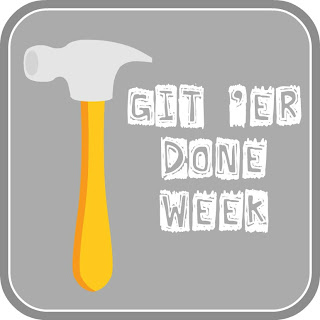 Thanks for dropping in!
Pin It
Email ThisBlogThis!Share to TwitterShare to FacebookShare to Pinterest
by iammommahearmeroar at 6:00 AM

Git 'er done! YES to that!! YAHOO! I've been neck deep in clothes sorting out over here, which does not make for very entertaining blog fodder, that's for sure. But I am so tired of hauling out 6 month sized shirts for my 21 month old (in fairness he's small and 6 month shirts fit him beautifully until a few months ago but still) every time I open his drawer. It is TIME.

Love the project, and I am so very sorry about the skirt fail. I always find it so extra sad when something you are making for yourself doesn't work out. It's just insulting somehow. Anyway, I hope next week is a better week!

Sometimes ya just gotta git 'er done, that's for sure. Life is not all raging exciting posts either so lets keep it real. Great idea!

This week I've been finishing projects I started. Some of them I started months ago. It's been good to get some of those things done. I'm excited for git 'er done week, it will probably motivate me to keep going. :)

Oh I am so loving your jar! Need to track down some lacy bits me thinks! I'm planning on a get things done week or 2 or 3 too.

YAY!! Today was going to be my git'r'done day anyway so I will get a jump start on next week! :)

They also make a Frosted Glass spray paint that I have been dying to try out with the same technique!

DIY is here - http://michaelanoelledesigns.blogspot.com/2011/09/pretty-lace-vase.html?m=1
And good news : it's in English ))))
But the information you've given, was full enough))) One more thing they've used was glitter.
Have a good time!
Aljona from faraway Belarus.

I am all about git'r'done week... with four kids running around the house like mad there are always at least a dozen things that need finishing!

It looks fab and such a simple idea, yet very effective.

Yep, I am with you on Git 'er Done week! I just seem to have all half finished projects going right now. Would be so good to get some COMPLETED.

This looks great - better than the original source! They almost look painted from the inside. What kind of paint did you use to get such a nice finish?

Thanks for your comment! I used spray paint. It's the easiest way to get a good even coat and no brush strokes.