Last weekend I got to host a baby shower for one of my friends.  I gave her a few theme options for the shower and she picked mustaches since she's having a boy.  That was great because I already had some mustache things and ideas from when Rex had that mustache fetish. 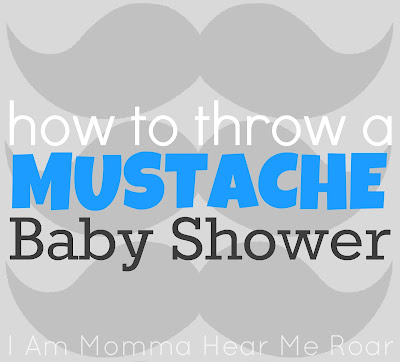 She opted to have the shower be an open house, which I think is always nice for everyone.  People could stop in when they wanted to.  Because of the open house style, it was a little tricky to think up some games.  I bought some butcher paper and drew this baby so people could play "Pin the 'Stache on the Baby." 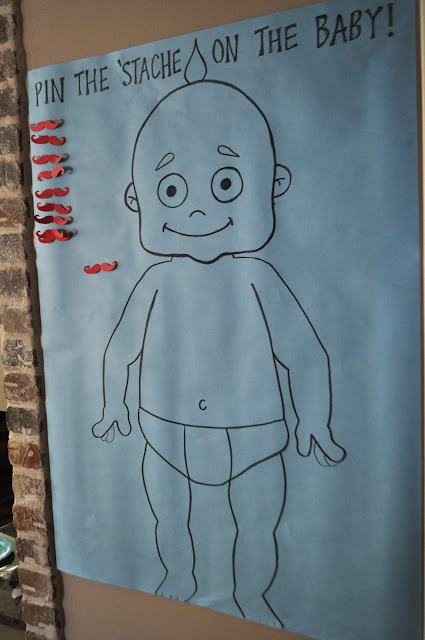 I also surfed the net for some famous mustaches and put out this "Name That 'Stache" game that people could play at leisure.  The red paper flipped up if you needed help guessing it. 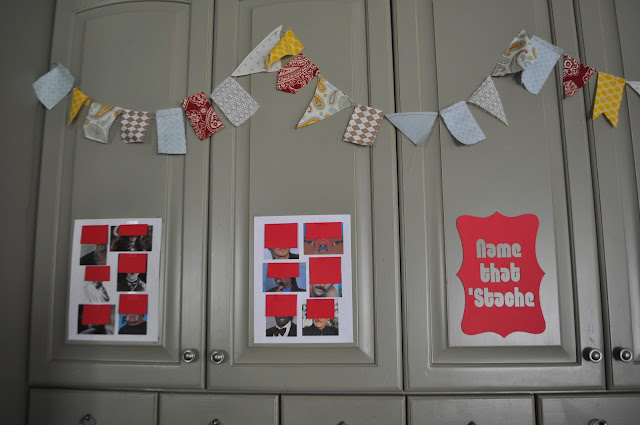 I made mustaches suckers for people to take home. 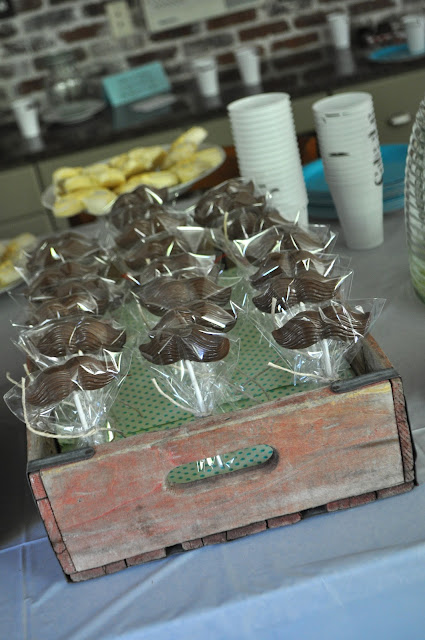 I put floral foam in the bottom of this crate I have and set scrapbook paper over the foam.  Then I just shoved the suckers into the foam. 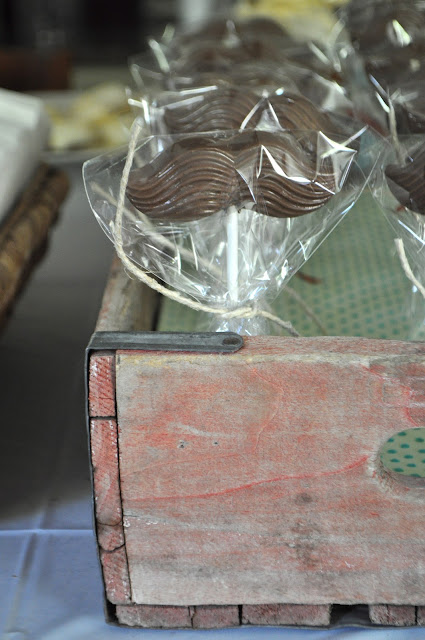 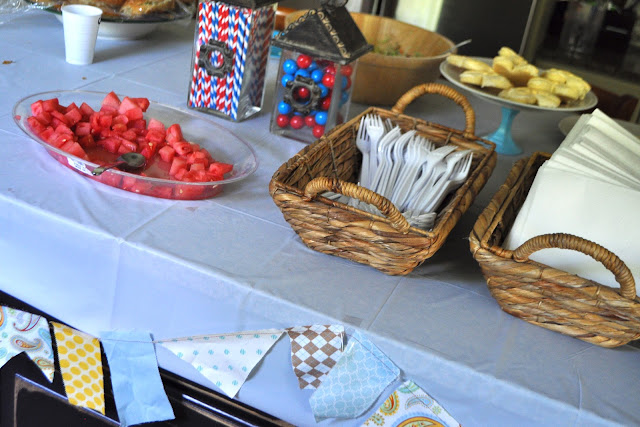 I went with red and turquoise, since I already had a lot of things those colors. 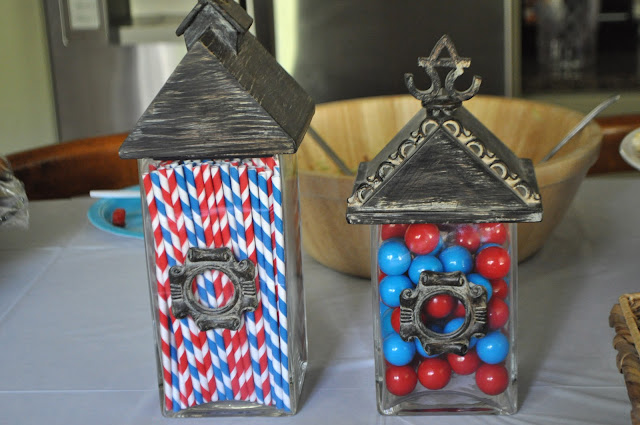 I also picked the wrong time of day to get a good picture here, but I strung up some onesies that I did freezer paper stencils and appliqués on. 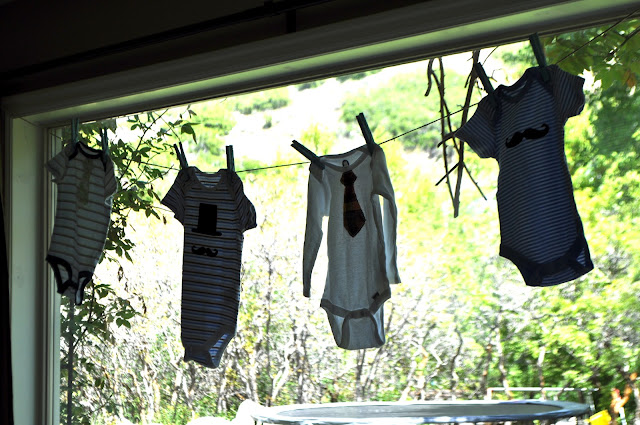 And I had some brown vinyl, so I cut out a ton of mustaches on my Silhouette and stuck them on the cups  for fun. 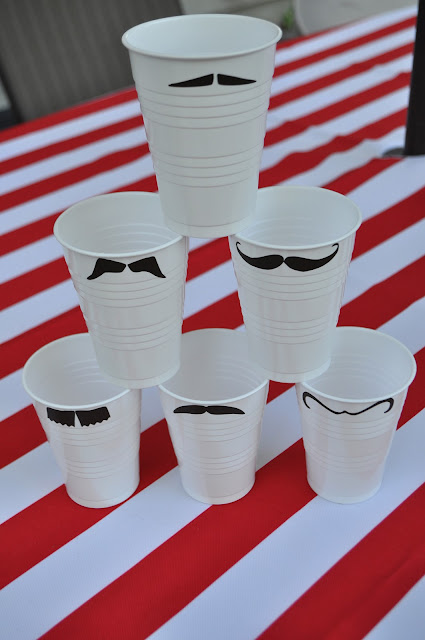 I wish I could show you pictures of all the people there, but I never want to just post pictures of people here without asking permission.  I bought a few packs of mustaches at the dollar store.  Even the older ladies were sporting them.  It was seriously funny.

Lastly, the mother-to-be and her husband brought their computer and set up a photo both for the guests.  They set it up in the entry way so people could take their pictures as they came in.  It actually kind of doubled as a guest book, which will be so fun for them to have. 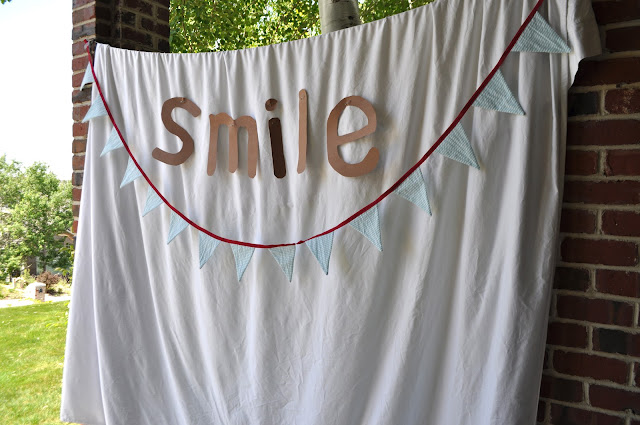 And there you have it.  The shower was fun and now we just have to wait for her little guy to make an appearance.

I love this so much! Pinned it! :D

What an awesome theme! You did a fantastic job! I bet that was so much fun for everyone! Thanks for sharing.

Great idea! Mustaches are all the rage. ;-)

What cool ideas! I can't wait until another one of my friends gets pregnant! We are absolutely going with this theme. Cute!

This is so darn cute. Way to change it up from trains, farms and cars! LOVE it!

Love this! Such a fab idea! Where did you find the vinyl for the cups?

Again, another great idea for shower. I am sure everyone got such a kick out of the whole thing. The lollipops came out great :-)

I love this idea! I am doing bow ties and mustaches for a "little man" shower this weekend! Who are your mustache celebrities? Love that idea!!

It's regular adhesive vinyl that you buy for cutting machines. You can find it at Hobby Lobby or any crafting store.

Such cute party ideas! so cute that my friend asked me to be in charge of pin the 'stache on the baby. I was wondering what you used to actually pin the stache?? is it just double stick take or thumbtacks? would love some feedback. I bought red paper and red foam based on a text pic of your cool project. Thanks for the feedback!

I either used double sided tape or that gummy stuff you use to hang posters. I don't remember for sure. Sorry!