I finally finished my organization station.  It had been on my list for a while. 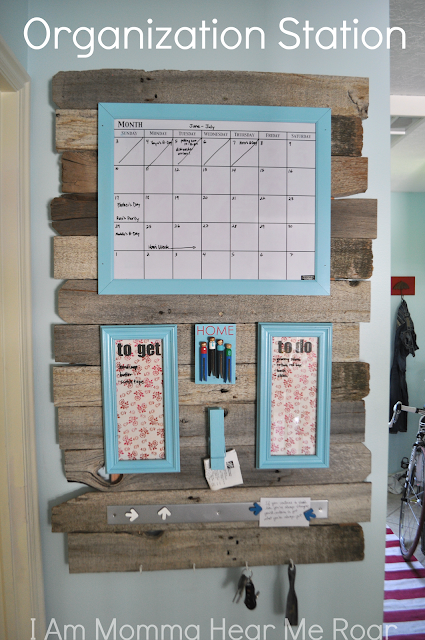 This project was completely inspired by THIS organization board from Girl Loves Glam.  It was one of those projects that I thought was brilliant and I was dying to recreate it.  Isn't it clever? 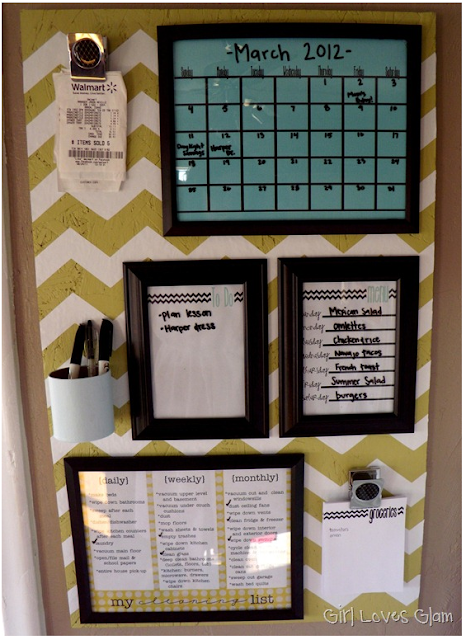 So, I put my own twist on it and made my own.  You see, I am an organization nerd.  It makes me ridiculously happy to have lists and calendars and now I love having them all in one place. 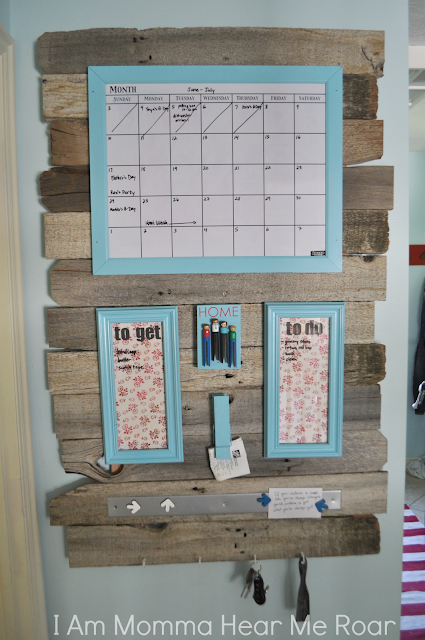 Here's how it went down.  I was helping my sister move and as we were taking the last load out I saw this aged wood from an old fence.  My sister wasn't taking it so I snatched it up.  I removed all the nails and staples I found in it. 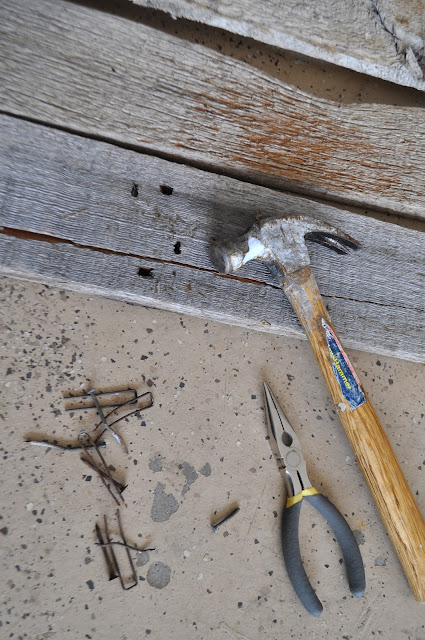 Then I loaded up the wood and got some help from my dad.  He has sweet equipment and even sweeter skills :)  We cut the boards slightly different lengths because I felt it fit the rustic look more. 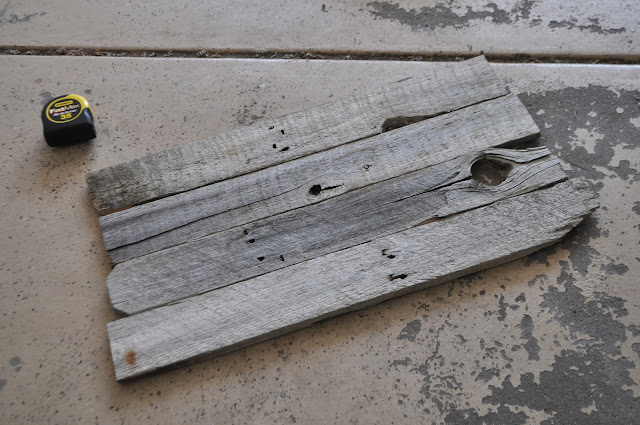 We took some scrap wood and ran two boards down the back, attached them with an nail gun.  Man, I would love one of those.  Pew! Pew! Pew! and you're done.  (That's the sound effect for the gun if you didn't catch that.) 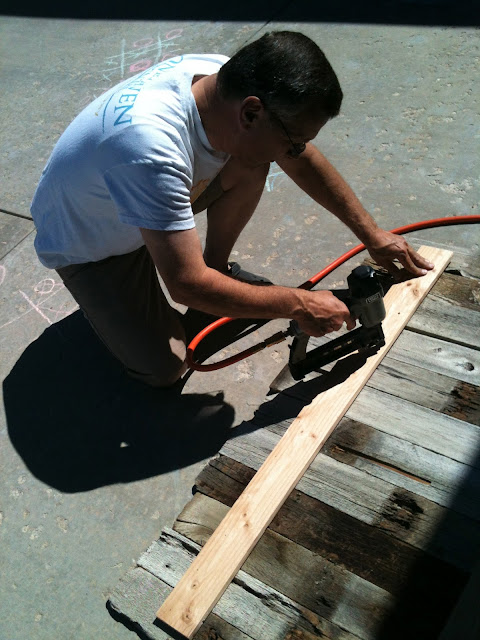 Then all that was left to do was to attach all the frames. 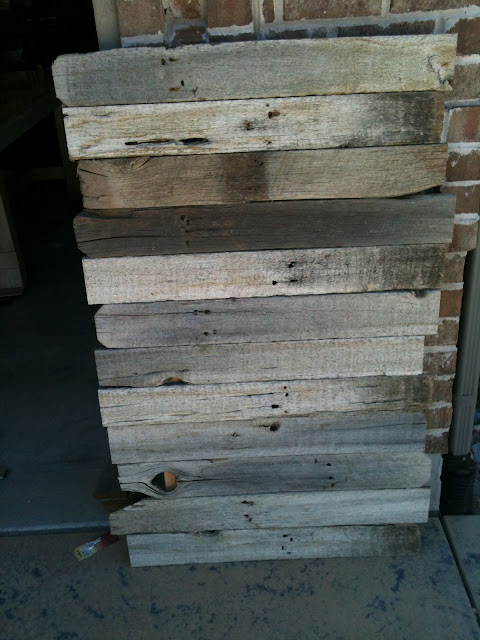 I had my dad attach them with the nail gun as well because I didn't want the falling off if the boys messed with them.  McKenzie used command strips on hers, which are awesome if you need to remove the frames to change out the papers ever.

I added a metal strip to hold magnets.  I purchased it from Ikea long ago.  The arrow magnets are from Target.  I also added hooks for keys at the bottom. 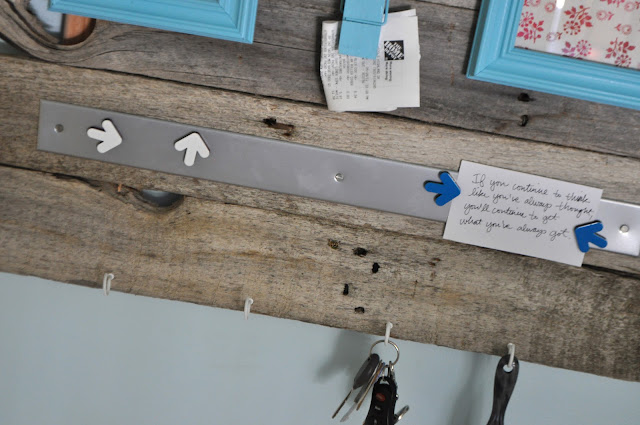 I also added our little clothespin family that I made HERE. 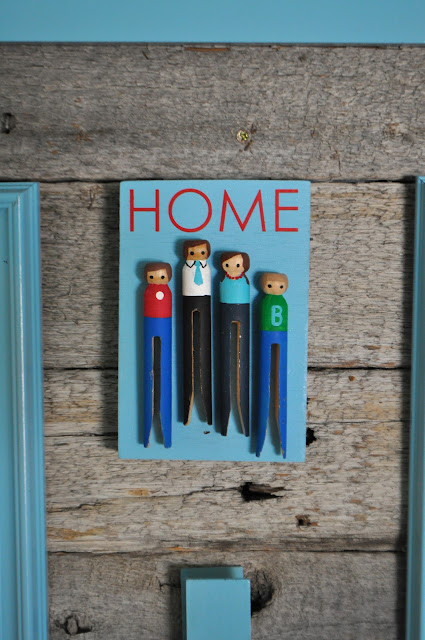 I sprayed all my frames to match, including an old dry erase calendar I already had. 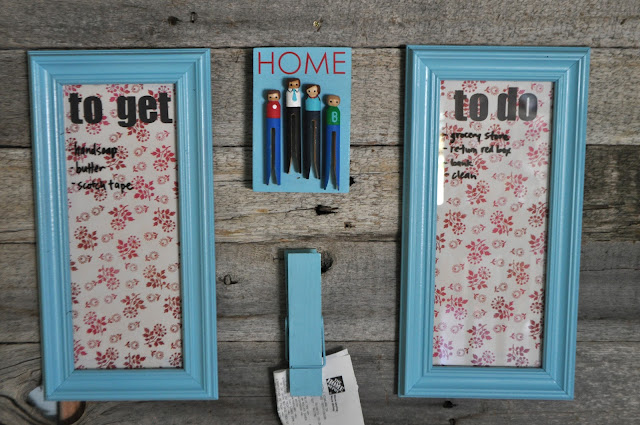 Since the wood was free and I already had the calendar, the whole project was probably less than $10.

With all this stuff on it became fairly heavy so it's screwed directly into a stud.  Once again, I like to know things are super sturdy if they are within reach of my boys.

And there you have it.  It's the first thing you see as you walk in from the garage.

That's all for today.  I'll see you tomorrow with some mommy school activities we tried out this week.  Thanks for reading.

That is too cool! I love the old wood look. What a great find.

HAHAA you crack me up!

Looks awesome - I may have to copy this idea!

Great job. I love the aqua frames on the rustic boards - nice contrast!

You should definitely get yourself a nail gun! I have an electric one. It's not as powerful as the pneumatic ones, and it only uses nails up to 1", but it's great for projects. Really easy to pull out and plug in anywhere!

This is so great!! I LOVE the aged wood paired with more modern look. Such a great idea to have everything all together.

Thank you so much for creating one! Now I want to redo mine! I love the wood. You are amazing!

Erica - Life at the Clubhouse said...

LOVE IT!!! I have the exact same dry erase calendar. only mine still has the plain black frame. I am thinking it may have to get a new look soon! ;) although i will probably go with red since its right by my kitchen which is all red/white/blue americana stuff (hey we are a military family!). I love the idea of grounding all the organization pieces to the wood. the nice thing being if you move it all goes as one piece! and as a military family making sure you can move things easily is KEY!

I am soooo doing it! I love making lists:)

I have followed your blog for a while now and LOVE it! I'm reaching out to my fellow bloggers to try and raise some awareness for and also to ask for some donations to help a fellow blogger out who is in need of our help! You can find more information here! I would appreciate anything you could do to help! Thanks, Shannon

I love this idea! I want to do something similiar in our house. I'm tired of things falling off the fridge! :)

this is amazing! you are amazing!!

ps you are such an inspiring mama. thank you!

I love this too! And think something like this might be perfect for my laundry room wall. Where did you get the dry erase calendar, ma'am?

Tools are like the BEST things to play with - I haven't got a nail gun yet, but man, do I use my stapler gun as often as I can. I have so much old wood around here it is ridiculous (live way out in the country) so thanks for the inspiration!

So glad I ran across your blog! I am loving it! You have a new follower :)

This is too cute. If you ever want to have an organization motivation giveaway I'd be the first to sign up. I can't seem to stay organized to save my life! Jealous!

Love it! A little bit of organization makes me happy too :D

This is absolutely fabulous. I love how you're always upcycling one thing or another in your projects...so inspiring, thank you!

Pew! Pew! Pew! I think those boys are rubbing off on you.

Jane of All Trades said...

We are remodeling our kitchen this weekend. Yes, I did say weekend. It is going to be a fast job but so fun. I have been mulling over an organization station and how I wanted to do it. Then bam! there is your post. I'll probably do it a bit different but I like seeing what others come up with and then combining the ideas to get my own unique look. Thanks for sharing. Yours looks great!

Love you take on the project! This is exactly what I need in my house, such a great way to keep organized! www.threeloudkids.com

Organization?! What's that?! You inspire me, and your board looks awesome :).

SUPER CUTE! Crossing my fingers you'll share at my party! Saturdays at Seven!

Desiring to be Titus 2 said...

Thanks for the inspiration! I am making one right now! I am using old barn wood for ours as well! I am so glad I found this Pin because the wood idea helped draw my husbands taste and mine together! Hopefully I will have pictures posted later today!