Let's announce some winners before we get rolling today.

The $50 Petite Lemon gift card goes to Jennyroo who said:  So great! Would love to win!

The 2 winners of the T.G.I. Friday's coupons are Leslie who said: You had some great ideas for when to use them. I think I could really use one right now, as I'm eating leftover over-cooked pasta, with no sauce. Blah. Thanks for the chance to win!

I was strolling through Gap Kids the other day and I saw this sweatshirt.  It was really cute and very Rex. However, it was pricey and I felt quite confident that I could make it myself.  So, I did.  Here's the Gap one. 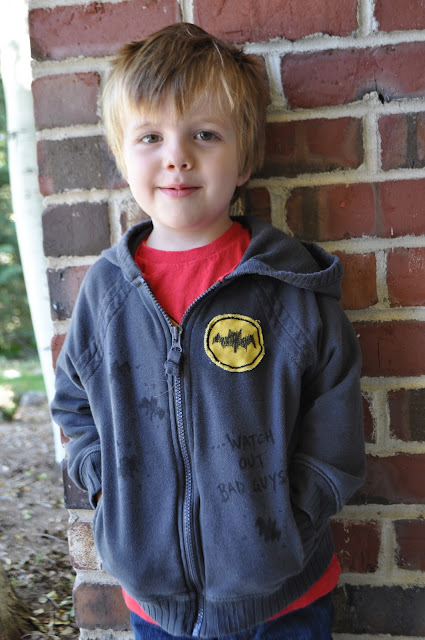 I happened to have this old sweatshirt of Rex's with some odd grease stains on it.  I thought it would be perfect to makeover. 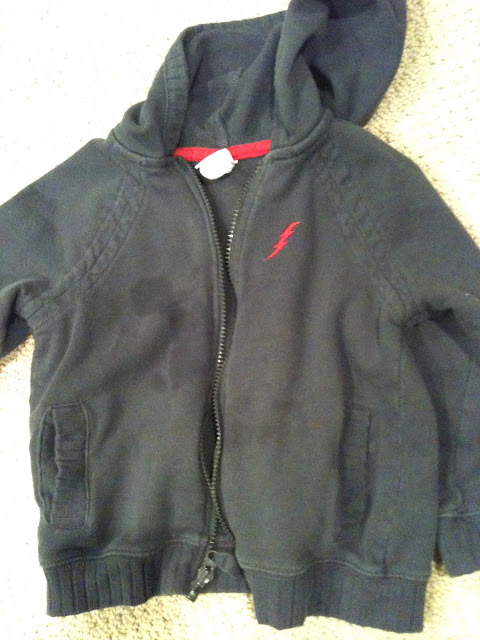 I cut out a piece of yellow canvas and drew a bat with a washable marker. 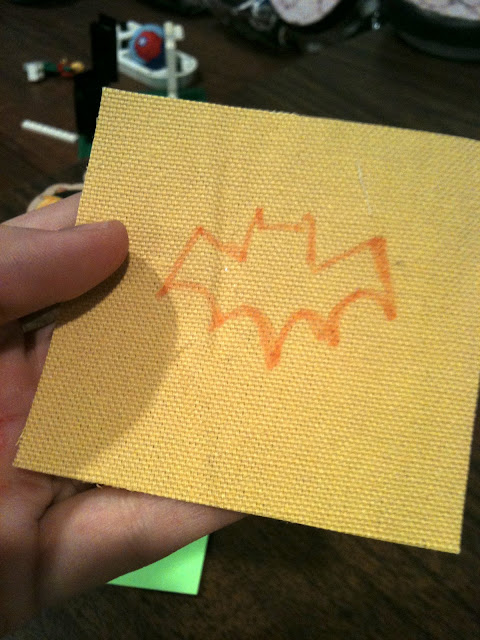 Then I put black thread in my sewing machine and stitched back and forth, again and again until I had mostly filled in the bat with stitches.  I would sew a straight line and then turn the fabric 180 degrees and sew the other direction.  Eventually it looked like this. 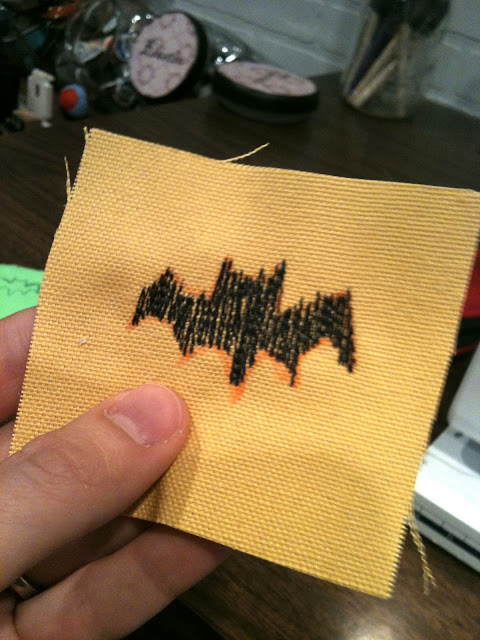 I cut it into a circle, centering the bat.  Then I stitched it onto the sweatshirt, covering the little red thunderbolt that was originally on it.  I used a small, tight zigzag. 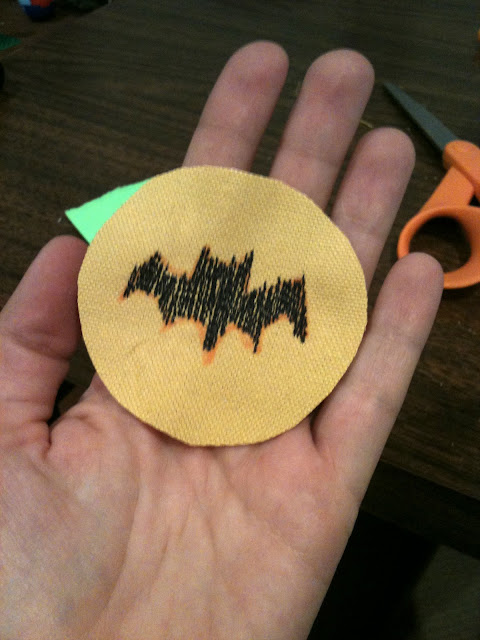 After one washing the orange marker was gone and the canvas had frayed, giving it that patch look. 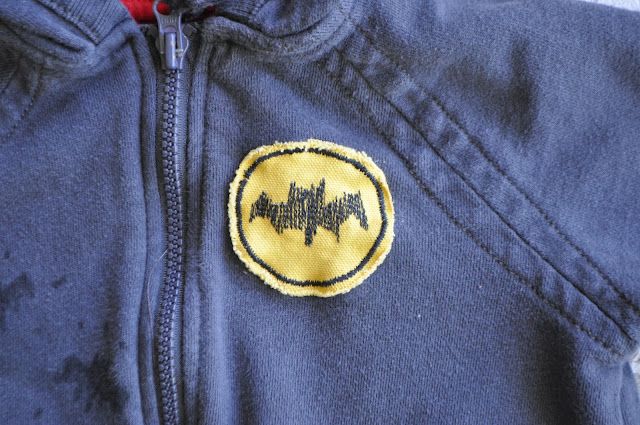 The rest was easy and fun.  I whipped out a black fabric marker and mimicked the designs and words.  I put then in a different location than the original sweatshirt, trying to disguise the strange stains on the shirt. 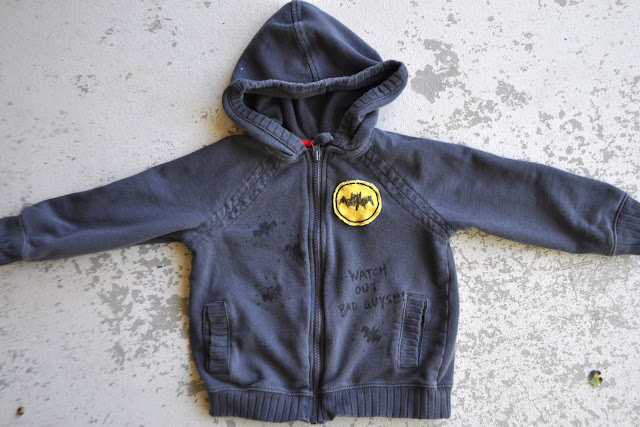 I also mimicked the design they had on the back. 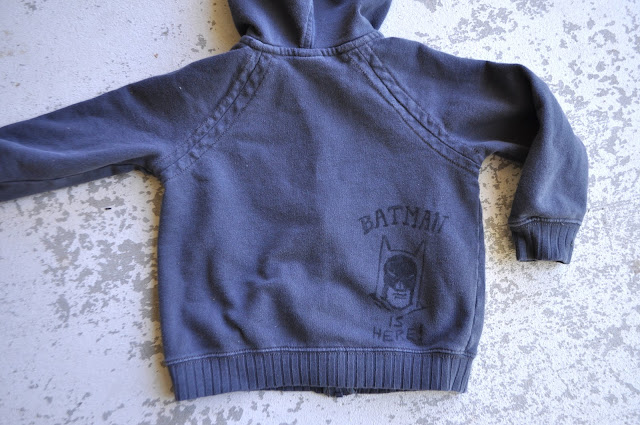 So, it turned out to be a free sweatshirt.  Win - win, baby!  Rex actually liked it so much he insisted on wearing it even though it's been really hot here.  He was in a full sweat wearing it a couple of days ago and I asked him if he wanted to take it off and cool down.  He refused.  I was kind of flattered :) 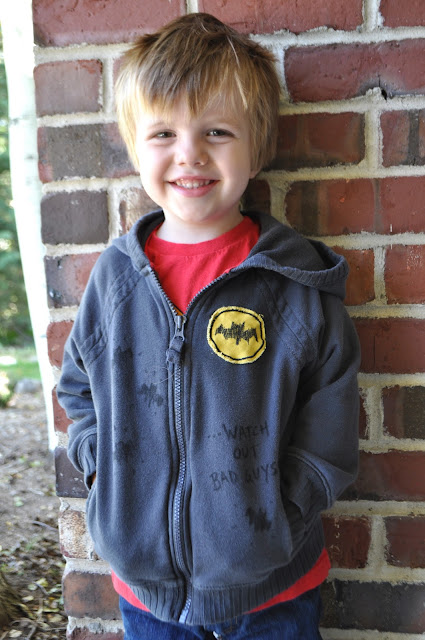 And now we're just waiting for the cooler weather.  I'm so anxious to bust out a long sleeve tee!  I love layers and I'm sick of looking at my glow-in-the-dark legs that never got tan this summer.

Anyhow, thanks for dropping in.  See you tomorrow.
Pin It
Email ThisBlogThis!Share to TwitterShare to FacebookShare to Pinterest
by iammommahearmeroar at 6:00 AM

OMG! I was looking for a sweatshirt to do the exact same thing. I saw it online and I knew my superheroes HAD to have it. Even on sale it is WAY to much. Yours looks great!

Those Gap shirts are way too expensive, your knockoff is way better than the original! And yip yip yippee to me for the Petite Lemon win! So excited!!!

great job, and way to cover up the stains! Just wanted you to know I shared your printables on my blog today, I love them and you are so thoughtful, I will send you a picture when I get mine done and my gallery wall all complete. :)

You got your wish. Snow! Yuck! Although the sweat shirt is awesome. I can think of another guy who would like that A LOT.

the sweatshirt is super cute! How fun!

What a cute idea!

I know what you mean...It makes me so happy when my guy loves to wear something I've made him, as opposed to me "forcing" him to even put it on! Your Bat placement totally disguises the mystery stains!

Clever idea. It's definitely on my long to-do-list!

Wow, I love this!

I guess you got your wish. The cold weather has now come. I was special enough yesterday to go to school with a short sleeved sweater and have it pour rain. Yea, that was fun.

Love it! So would my boys!

What a great sweatshirt, even better than the Gap!! Mght have to try this one too :)

That is so smart! & it turned out so cute! your little boy is one lucky little guy to have you as his momma

awesome job! my little four year old would love this :)

You did such an awesome job ... I just love it! My little guy would love that too.

LOVE IT!!1 You are my favorite boy mamma blogger!!! you have the cutest knock offs that I love to redo for my son and nephew! I WILL be doing this!! I will probably have to do a Spider-man version though because my 2yr old son majorly <3's all things Spidey! Thanks for the inspiration!!

I love reading about your creations.

So I see this cute little batman sweater on Pinterest and I think to myself "that looks like something Cheri would make" and then I click it and see your URL and just about bust a gut. You have a style, obviously, that I can recognize it from a tiny thumbnail on my iPod!!!! Love it.