This post is meant for Utah locals, as it is about Cornbelly's - a local attraction.

A couple of weeks ago I was offered free tickets to Cornbelly's, the corn maze and pumpkin fest held at Thanksgiving Point.  I had never gone before and I thought it would be fun to take the boys out for some fun.  My sister and two of my nieces joined us and we went off to see what it was all about.

I knew there was a corn maze and I knew there were several other attractions, but I was amazed at how much there actually was to do there.  The place is covered with fun photo ops, loads of playground-type equipment, and lot of farm-type fun as well. 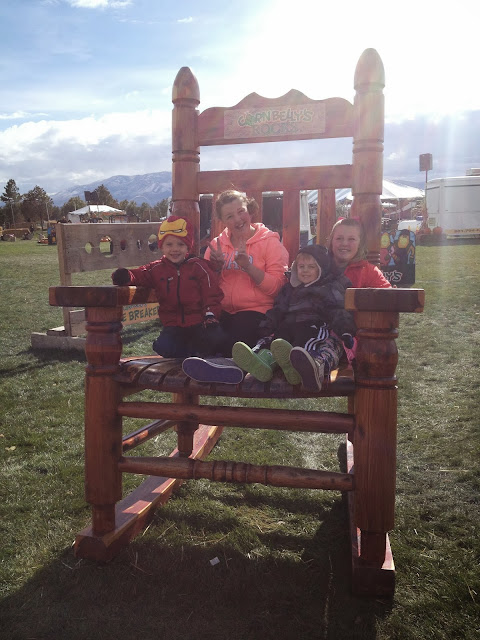 What I liked the most about it was that it was simple, old-school fun.  There weren't rides with flashing lights, but rather potato sack slides.  I love that. 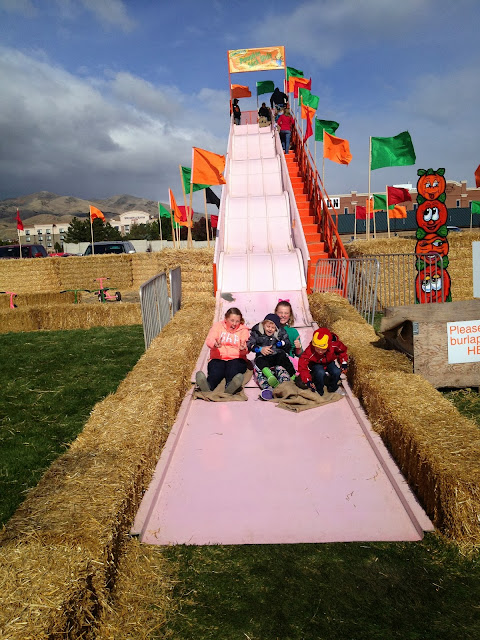 My boys loved it too.  The duck racing was Baden's favorite. 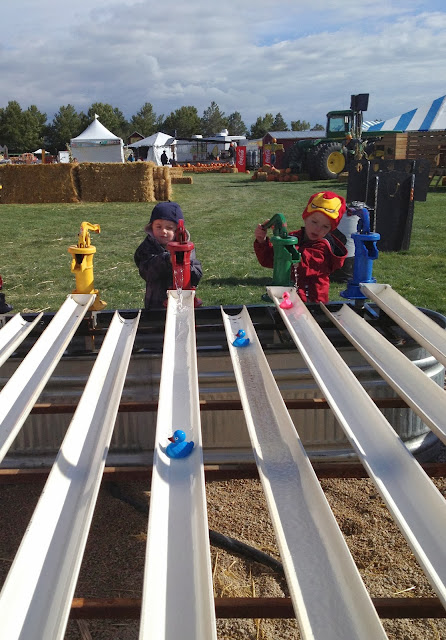 The corn maze itself is pretty cool.  The theme this year is based on the local college rivalry.  The kids all chose their sides :) 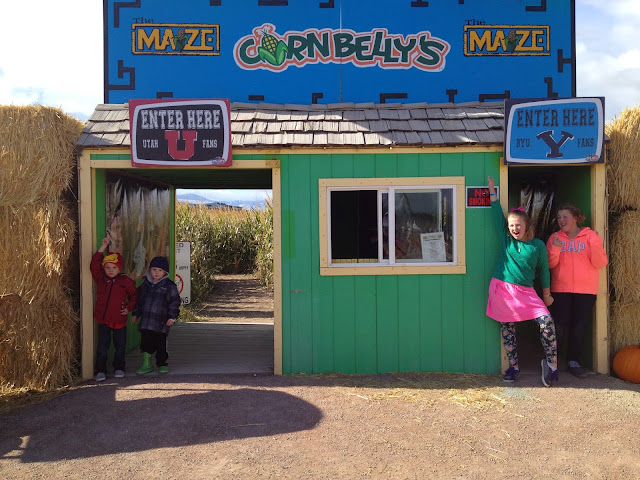 Now, I must admit that I am really directionally challenged.  We spent most of our time in the maze quite lost.... 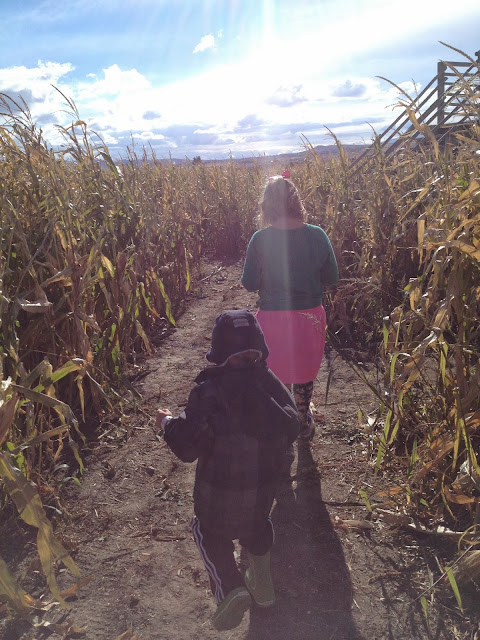 ....but the kids were excited just to walk through the corn. 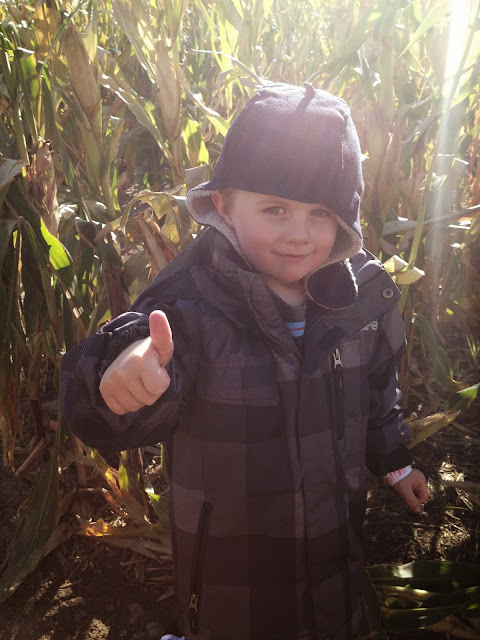 We were determined to be victorious.... 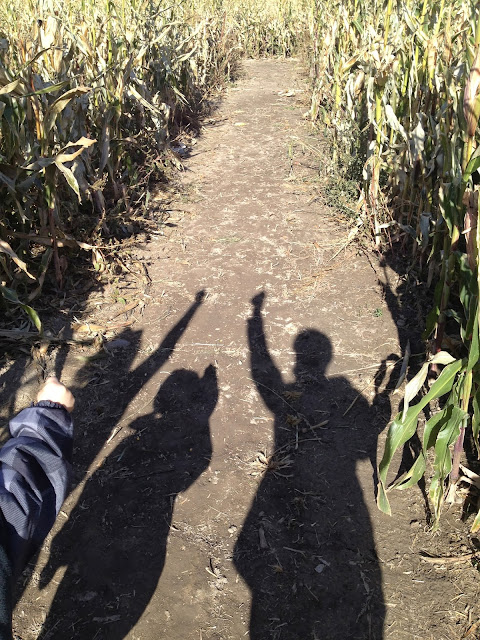 ...but Rex finally declared that we were going to have to sleep there that night. 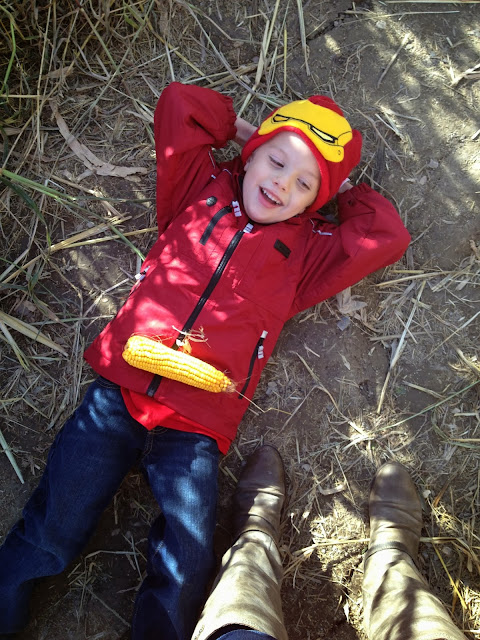 Beside the maze, there were a ton of things to do.  The boys liked the air pillow.  There were pedal carts, tractor rides, pig races, and lots more.  There were also a few activities you could do if you wanted to spend a little more money, like a climbing wall, mechanical bull, and face painting.  They was also fun food for purchase. 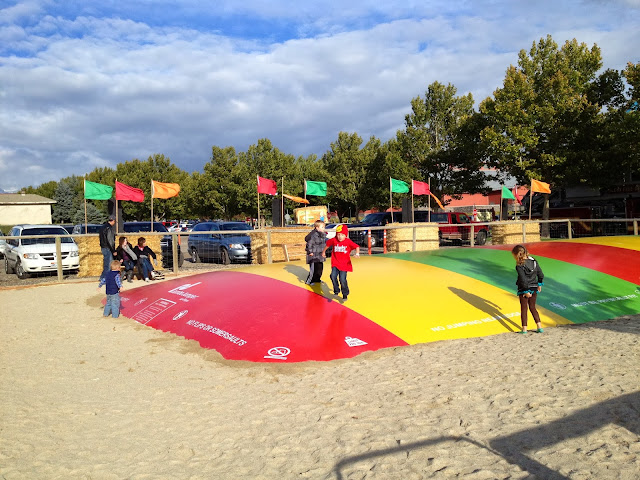 We spent about 2.5 hours there, but we probably could have stayed double that amount of time.  We happened to be there on a freezing cold day and I had little Elsa with us, so we didn't last longer than that.


So, we definitely give Cornbelly's two thumbs up.  Today we're giving away two Screamin' Passes.  To enter, leave a comment telling me what the theme of this year's corn maze is.  I'll announce the winner Monday. 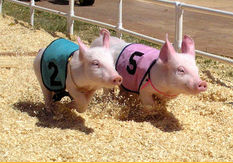 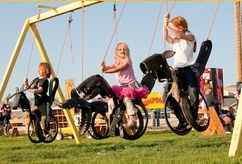 To learn more about Cornbelly's you can head to their web site HERE or their facebook page HERE.  Thanks for dropping in.
Pin It
Email ThisBlogThis!Share to TwitterShare to FacebookShare to Pinterest
by iammommahearmeroar at 1:27 PM

If it's the local rivalry, I'm betting it's Y vs U!

The theme this year is byu vs utah. I think my boys would love this.

Looks fun! We haven't ever been with our kids and would love to take them. The maze is the famous BYU cougars and Utah Ute rivalry. :)

Love Cornbelly's! And the byu/utah rivalry is epic. I just love where I live.

BYU vs Utah. I'd definitely be going through the BYU side. We love Cornbelly's. Ok, really my kids love Cornbelly's. I can take it or leave it personally but they have so much fun there and like you said, I love that it's good old fashioned fun.

So, we're missing the big fall festival here so this would be a super fun way to spend a day! I've never been to thanksgiving point but it's on my Utah bucket list:). Since the theme is the u vs the y I'd have to say your boys are smart;). I'd go in with them on the u side...we're in aggie land in Logan and sadly we lost last night.,,,so I can't support the y;)

BYU vs the u! I actually have never taken my kiddos but it looks super fun!

Rivalry fun! Love it. Hubs would enter on the U side. I would go on the Y side. Unfortunately, the U won the entire state for rivalry games this year. :)

I LOVE cornbellys!!!! best place ever!!! the maze is BUY v U

We are hoping to go there next week when we visit Utah! The maze is BYU vs. Utah. We looked it up and loved it!

The maze is BYU vs. Utah. Looks like a lot of fun.

Y vs U. My boys would love this.

The theme is the BYU/U of U rivalry. I'm so glad you reviewed cornbelly's! I have a 20 month old and didn't think there would much to do with her there this year but it looks like there are plenty of things she would like so we'll definitely take her. Thanks!

Rivalry! We watched that game as UofU fans with our neighbors popping in as BYU fans. Fun night!

Theme is utah/ but but I say so cougars!

Rivalry is the theme! The Uof U and the Y (go Cougs!)

The epic rivalry (so sad the football games are ending) Y vs. U.

I have never been but we love corn mazes and the like. That looks incredibly fun! The theme is Utah vs. BYU. Of course!

We love Cornbelly's!!! The maze is BYU vs UTAH. We have never done the maze but the other stuff is so fun.

The rivalry! If we went, it'd be hard to decide which side to enter as I'm a U fan and my hubby is a Y fan. :)

BYU vs U rivalry! Blue runs through our veins! :)

Looks SO fun. We'd definitely enter from the U side.

Ah, the old BYU/University of Utah rivalry. Thanks for the giveaway!

The Holy war/U vs BYU!

the corn maze is about the byu-utah rivalry
--Erin

Byu vs Utah! Thanks for the review! Can't wait to check it out!